What's in the veggie garden in March?

"Not much" is the honest answer! Most of my Winter crops have gone now, though there are still a few of the Endives and Chicories left. They are very hardy and will survive some serious frost, but they got off lightly this Winter.

﻿
﻿
The Sugarloaf chicory has not done particularly well, producing only some very small hearts. I think I sowed it too late in the year for it to get well established before the Autumn came.


At the weekend I was preparing one of the raised beds for sowing, and I had a pleasant surprise:- 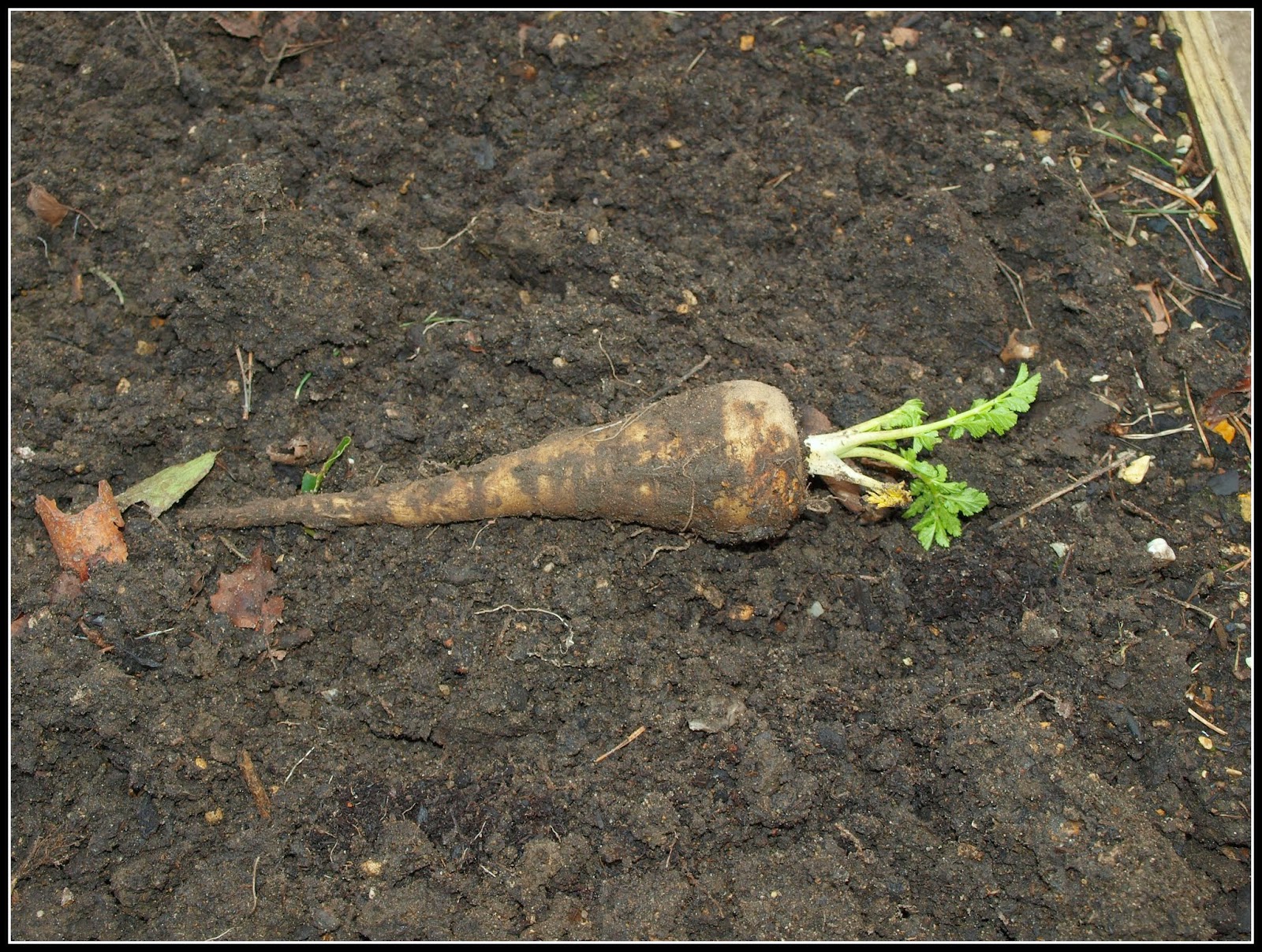 I thought I had cleared all the Parsnips a couple of weeks ago but evidently not!  The leaves of Parsnips die down in the Autumn, but as you can see in my photo, new ones appear in the following Spring. The Parsnip is a biennial, using the first year to store up energy in its swollen root. If you leave it, it will produce new leaves and eventually a flower stem, in its second year. This one has missed its chance. It will soon be ending its days in a stew or something!

I now have two rows of Broad Beans: 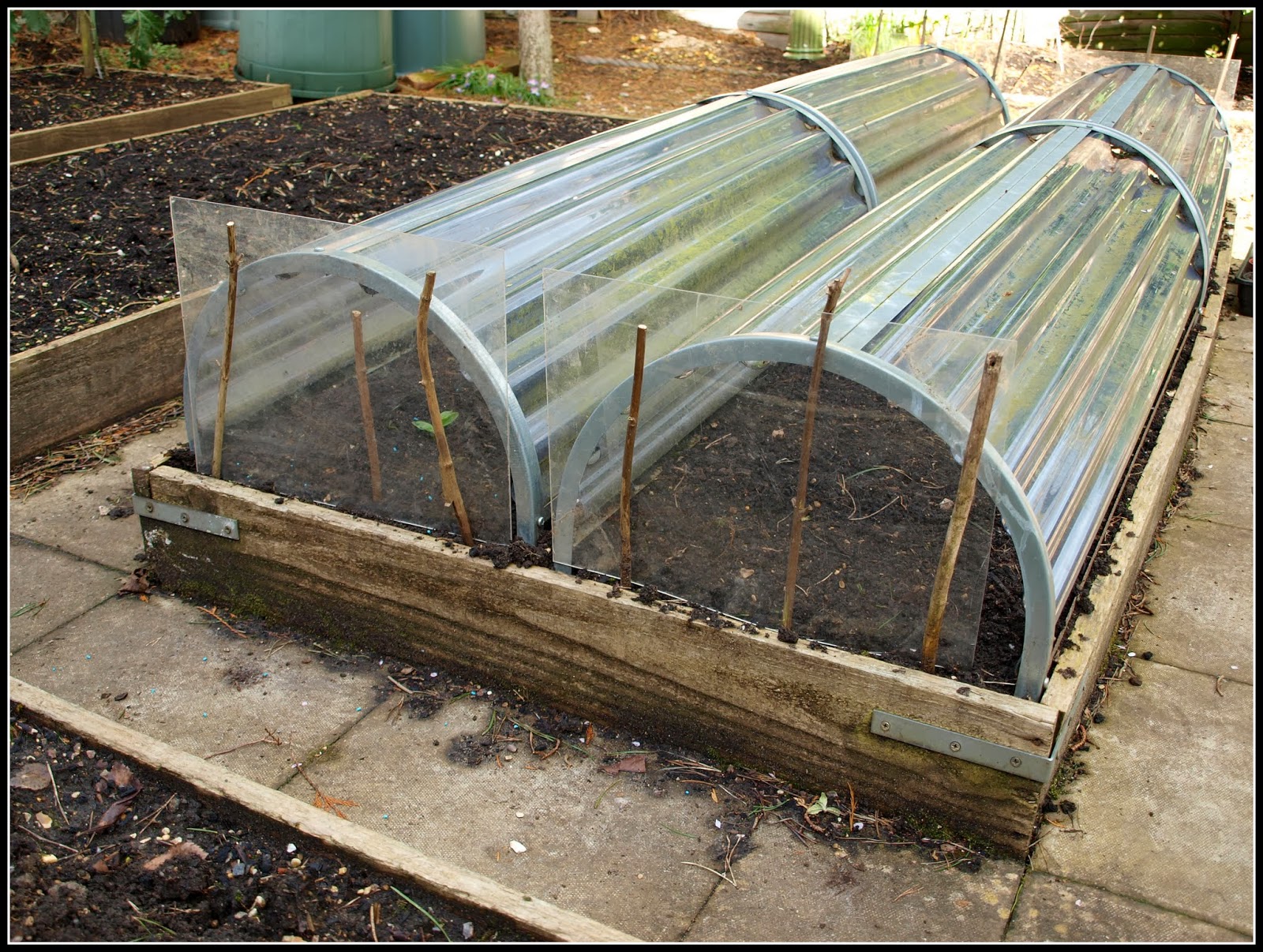 Well, I say I have two rows of Broad Beans, but I actually mean one real row and one potential row. Under the left-hand cloches is a row of small seedlings, (they are "Stereo"), whereas under the right-hand cloches there is simply a row of seeds, which I put in about 10 days ago. Hopefully they will soon germinate too. I have closed off the ends of my "Longrow" cloches with end-pieces improvised from rectangles of clear acrylic which I had in my shed, because the ones that came with the cloches were far too flimsy and they keep falling out. I have lost patience with them, so they have gone in the dustbin now. While I was planting out the Broad Bean seedlings I sowed a row of Radishes alongside them, so that when they germinate they too will be protected by the cloche.

In the garage my seed potato tubers are putting out some nice shoots (aka "chits"):
﻿ 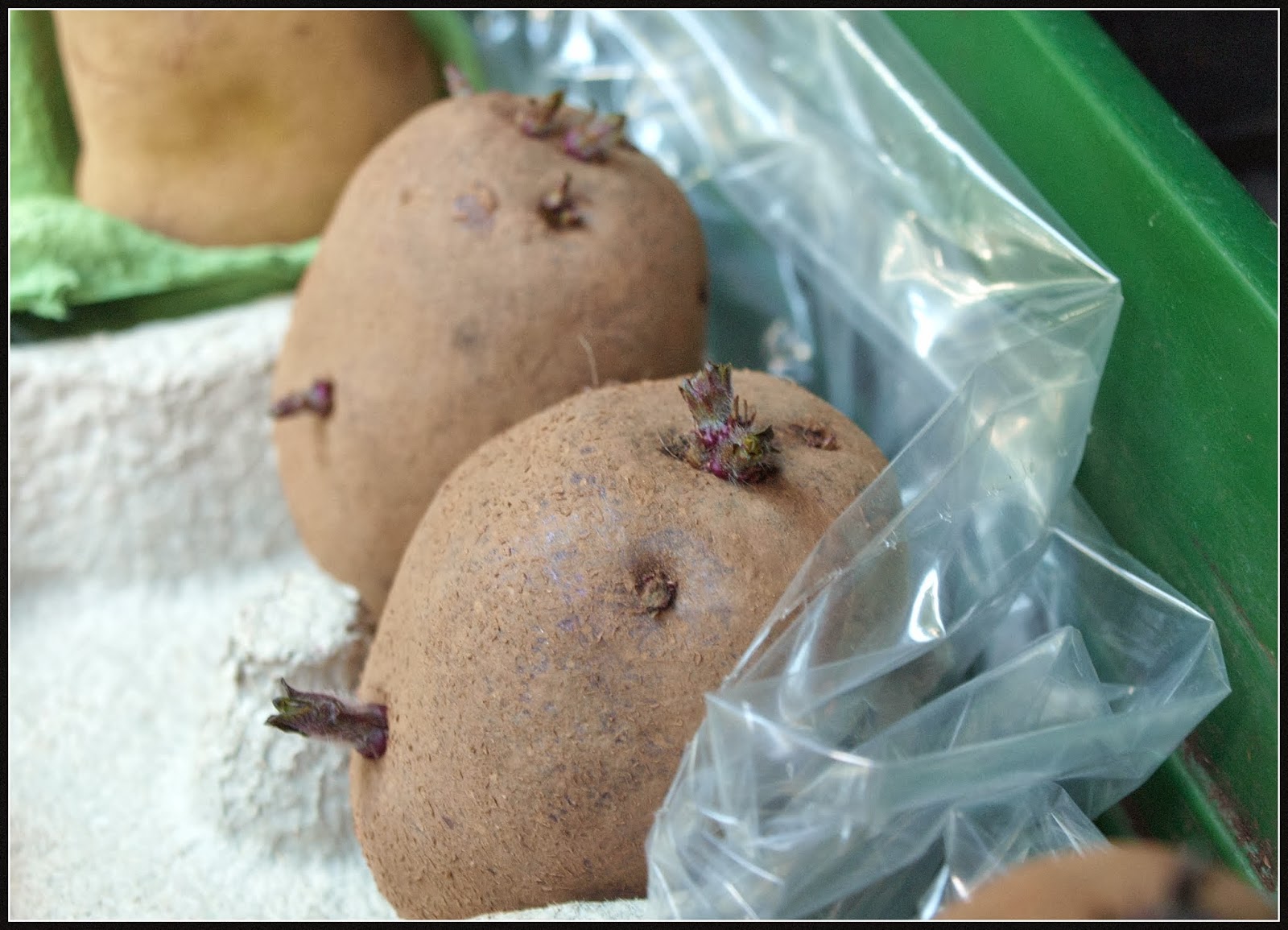 I expect to be planting the first of the potatoes some time towards the end of March. I'll soon be setting up my plastic "Seedling Greenhouse" to protect them from frosts. We have had very little frost this Winter, but I'm not being complacent because we could certainly still get a cold spell.

My two pots of peas are looking good, growing slowly but strongly. I have now provided them with some sticks for support. 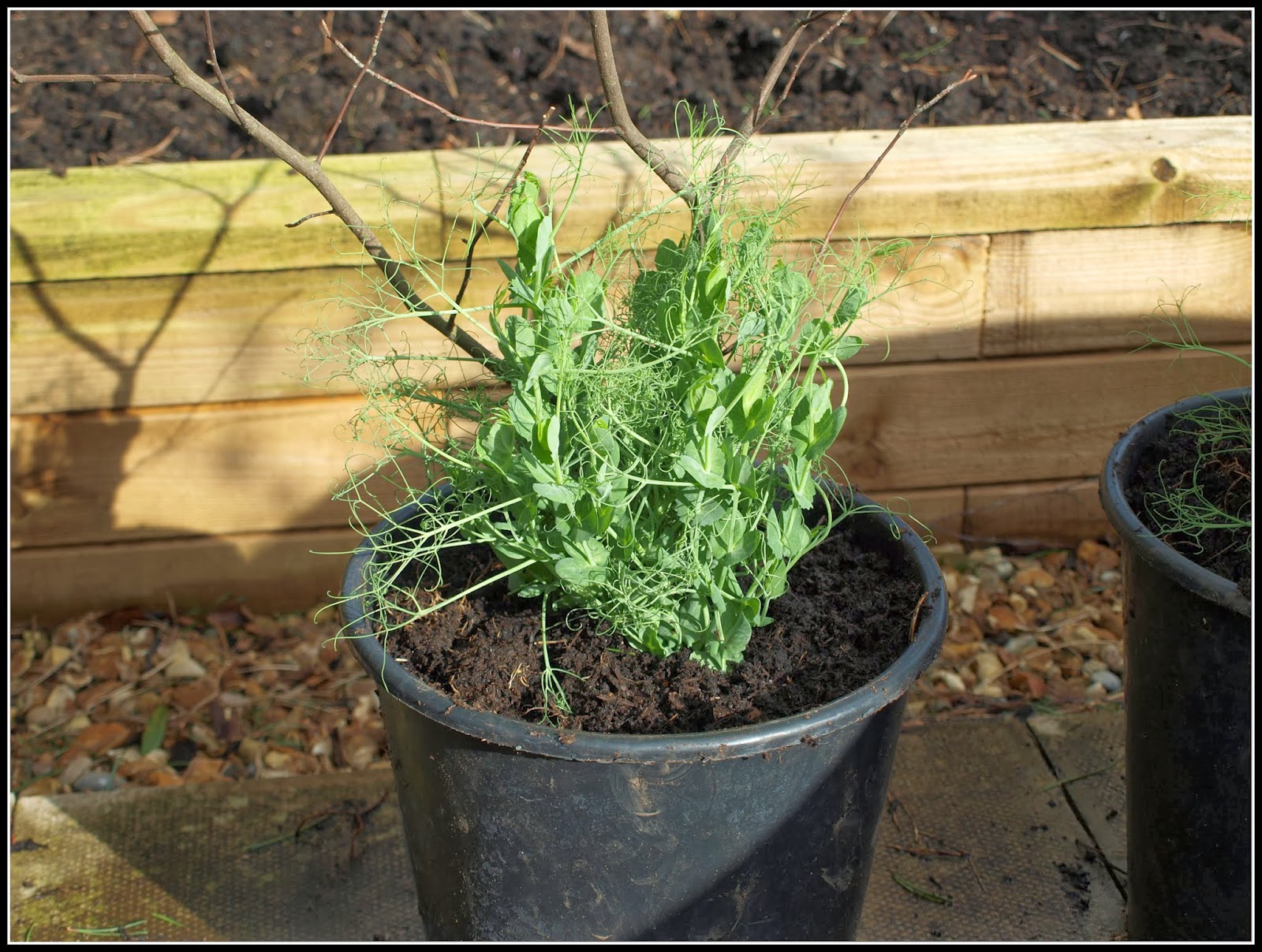 The pea-sticks are small Beech branches, "foraged" from the side of the road about 50 metres from our house. In our road there are several big Beech trees and during the Winter storms they have lost a lot of branches. Seems a shame to waste them...!
﻿ 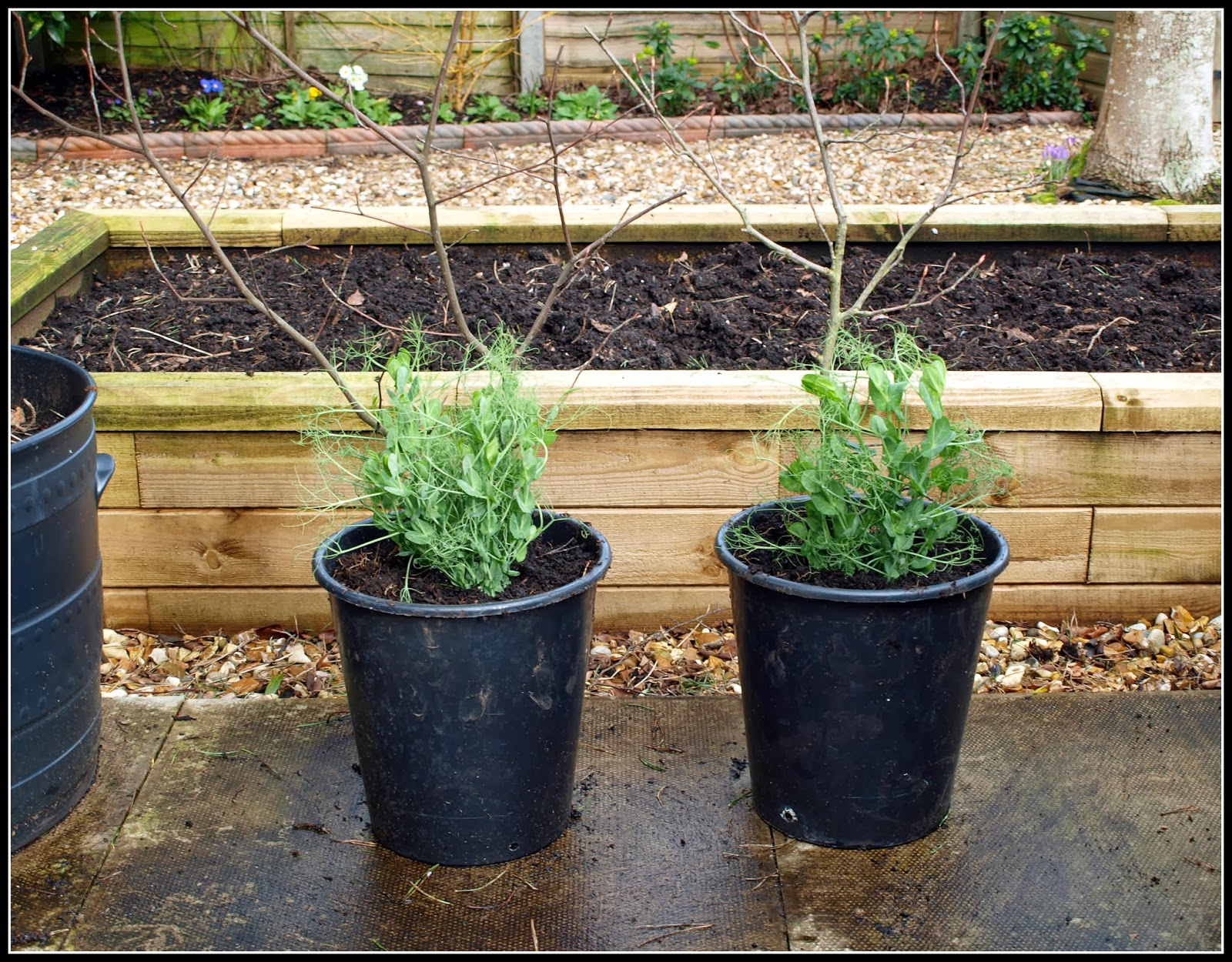 At the weekend I sowed some Leek seeds ("Toledo") in a number of small pots so that I can keep them under cover in their early days. I have little experience with growing Leeks (I have only tried them once before, a long time ago, and wasn't very successful), but I'm determined to do better this time.

I have also sowed a variety of Lettuces. Some of them are the Best Winter Lettuce mix that I was sent by Sarah Raven, and the others are ones sent by Dominika, a blogging friend from the Czech Republic. They are a green butterhead called "Devin" and a red-tinged one called "Cervaneck", which looks a bit like "Marvel of Four Seasons". Lettuce is the heart of most good salads, so I'm planning to ensure that I have plenty of it available for as much of the growing season as possible.

March is not the busiest month for seed-sowing - for me that is April - but it's certainly nice to feel I've made a good start. I'm now anxiously scanning the surface of the Asparagus bed every day to see if the first few spears are coming up. I suspect it won't be long now, in view of the contiinued wet but mild weather.
Posted by Mark Willis at 12:00