Do you know what a "trencher" is? The word was originally used to mean a sort of plate made of bread, on which food was placed. When the food was finished, the trencher / plate could then be eaten too. I like that idea - it saves on the washing-up! You may have heard people say of someone "He is a good trencherman" - meaning that he eats a lot (and finishes his plate...?).

In parts of the UK this technique is still used, but instead of bread, Yorkshire Pudding is used. I'm sure most of you know what Yorkshire Pudding is, but for the benefit of the uninitiated, it is a roasted savoury pudding using a batter made from flour, eggs and milk. It is often served alongside roast beef as an accompaniment to the archetypical British Sunday Roast.

Here is my version of Yorkshire Pudding used as a trencher: 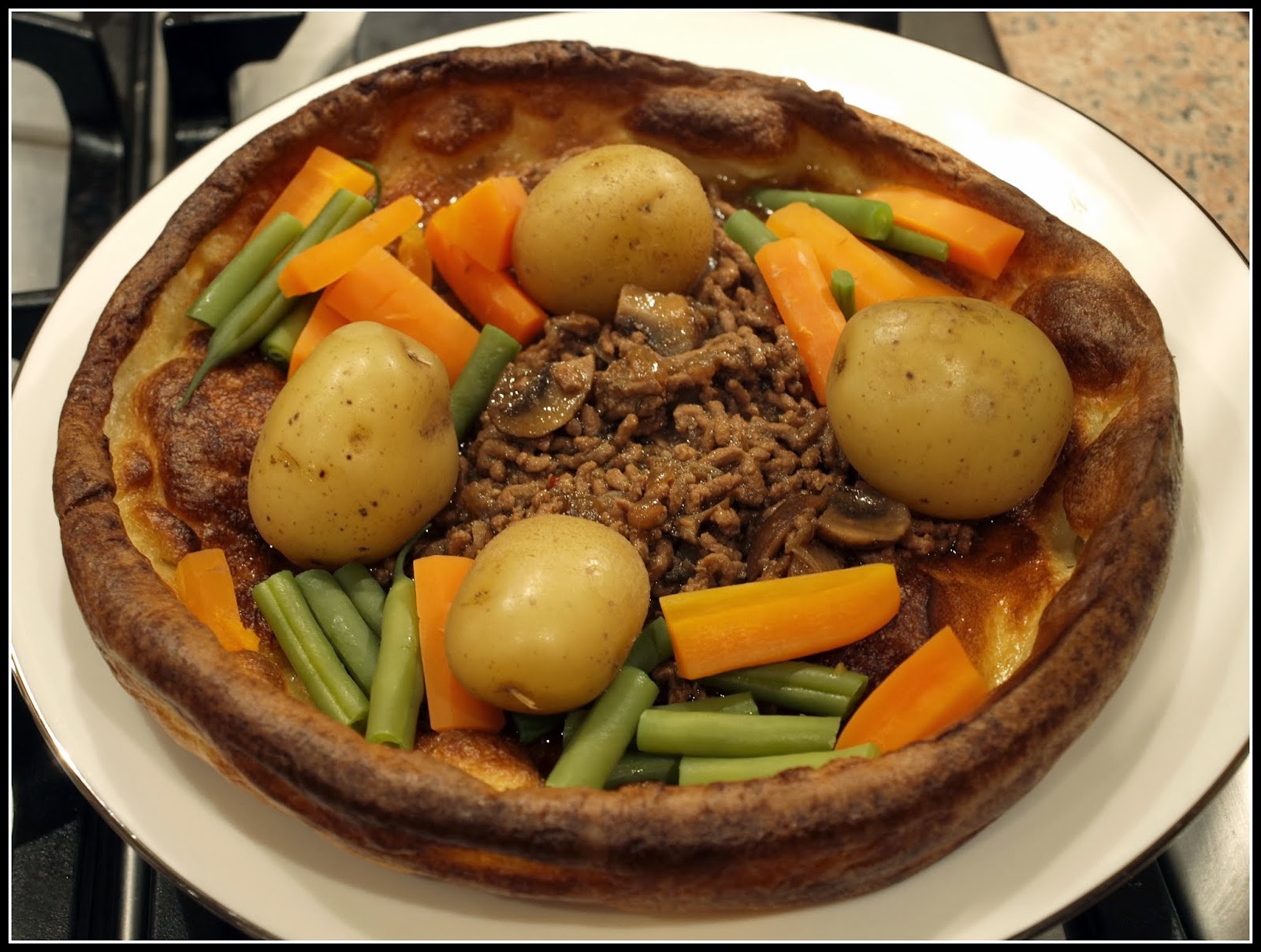 I have only ever cooked Yorkshire Pudding twice before this, and both times it had been highly successful, so there was an element of "reputation needing to be maintained" in this meal. I didn't see fit to change a winning formula, so I used as before the recipe from Hugh Fearnley-Whittingstall's book "Meat" (p517). I did however add a refinement of my own. I know that Yorkshire Pudding has a propensity to stick in the pan, so I lined the base of my pans with silicon paper, well greased with lard. Hugh suggests using oil for cooking the puddings, but I used the more traditional lard. I made really sure that the pans were thoroughly greased, especially at the edges where the batter bubbles up most.

The key to getting good Yorkshire Pudding seems to me to be to get the lard / oil as hot as possible before putting in the batter. When pouring the batter into the pans you should not take the pans out of the oven but instead take the batter to the oven and pour it into the pans from a jug, and then close the oven door as quickly as possible so that little heat is lost. I also think it is good to allow the batter to stand after mixing it. I made mine about 6 hours in advance and left it to stand in the fridge until about half an hour before cooking time.﻿

Hugh's recipe suggests a cooking time of 20 - 25 minutes at 220C, which turned out to be exactly right, though I would recommend keeping a close eye on your puddings as they cook (it is fascinating to watch them rise anyway!). You want them to be crispy, but not burnt. It's probably not a good idea to open the oven door either, until the puddings are done.

Sometimes a Yorkshire Pudding can be soggy in the middle even when the edges are cooked, but since I cooked my puddings in large pans (they are cake-tins really), they had a big surface area and therefore the batter was distributed fairly thinly. This, combined with my trick of lining the pans with paper, meant that each pudding was cooked evenly and there was not a hint of sticking. When they were done, the puddings slipped out of the pans very easily. 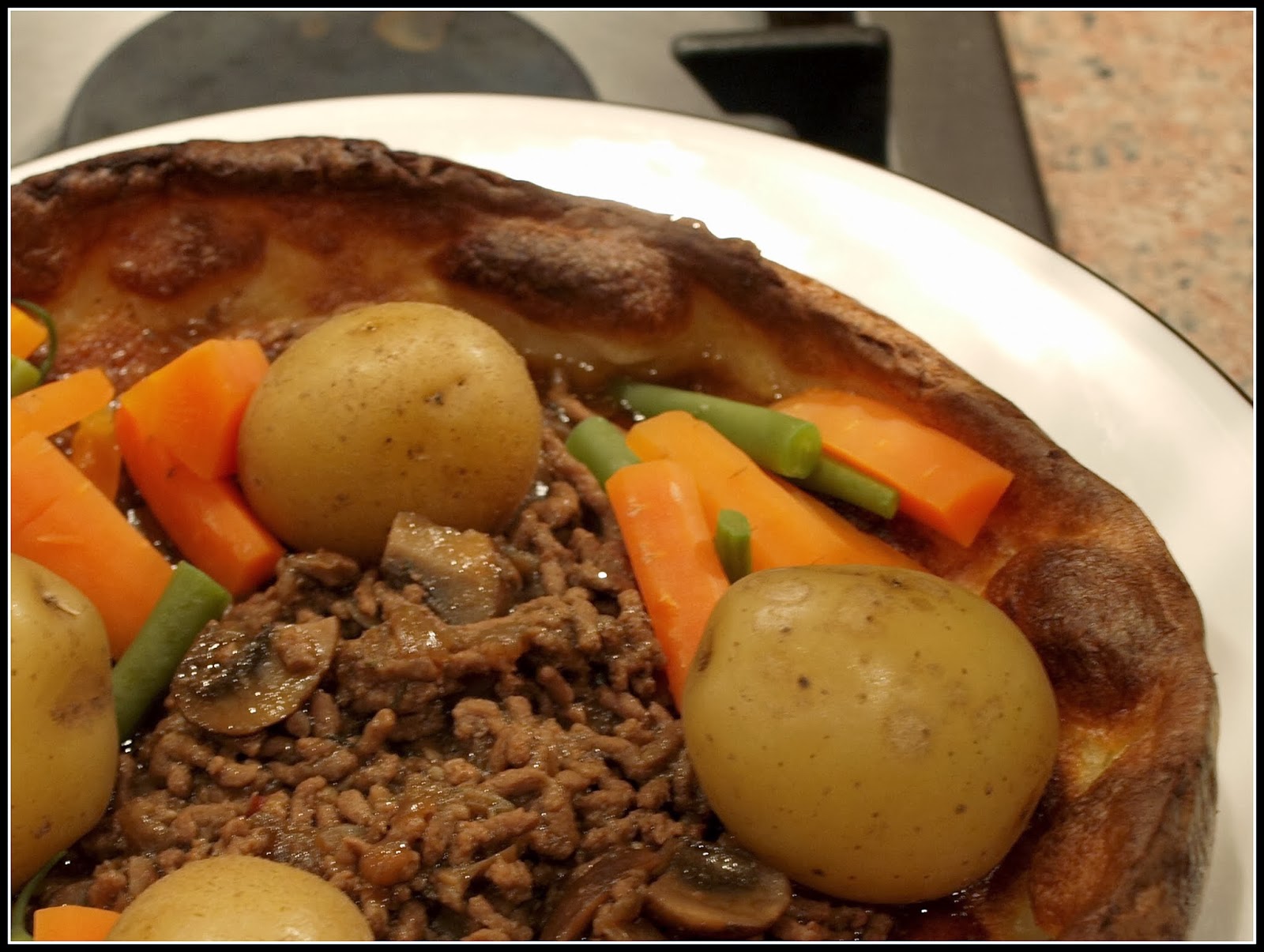 The filling I used was very simple - minced beef cooked long and slow with some onions and mushrooms, along with some boiled carrtots, green beans and new potatoes. I deliberately made the beef quite "runny" so that there was plenty of gravy. If you are a non-meat-eater I imagine this dish would be just as good served with no beef but a larger quantity of mushrooms.

So there you are: three in a row. Reputation maintained! 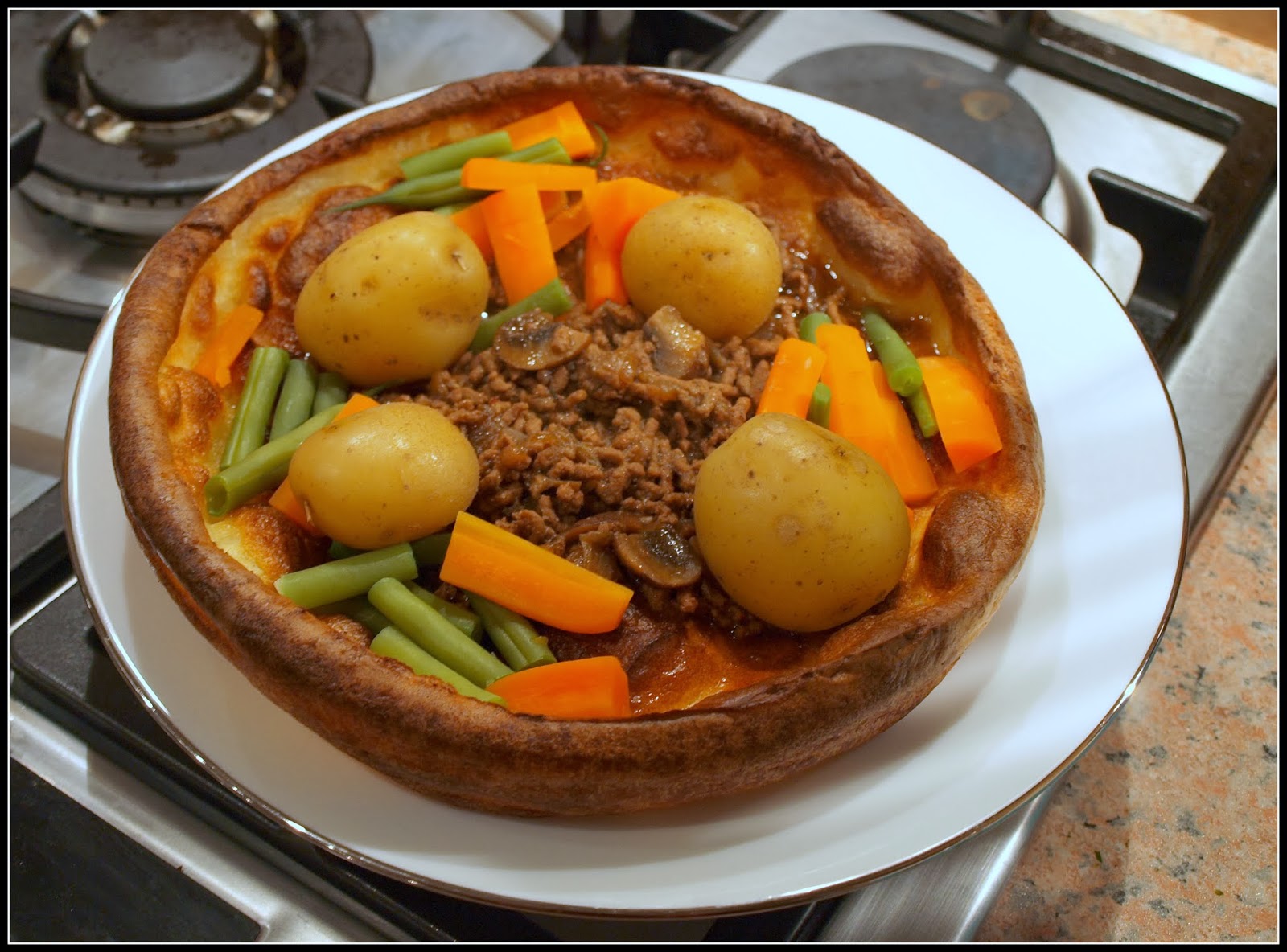