Inspired by the work of Yotam Ottolenghi, I have become a bit more adventurous in the use of Middle Eastern ingredients. The other day, while visiting our daughter Fiona in France, we were lucky enough to be able to visit a Palestinian grocery shop. The object of the exercise was twofold: to buy some nice fresh items for an evening meal with the family; and also to buy some nice things to bring home with us - especially things that are either not so good in England, or even not readily available. Success was achieved on both fronts!

For some time now I have been wanting to try Frekeh, which Ottolenghi often advocates in some of his Israeli / Palestinian dishes. Frekeh is a type of wheat which is harvested green and then "toasted". In the olden days the wheat was burned to remove the chaff, but I suspect that this procedure has been replaced by a more sophisticated industrial process! 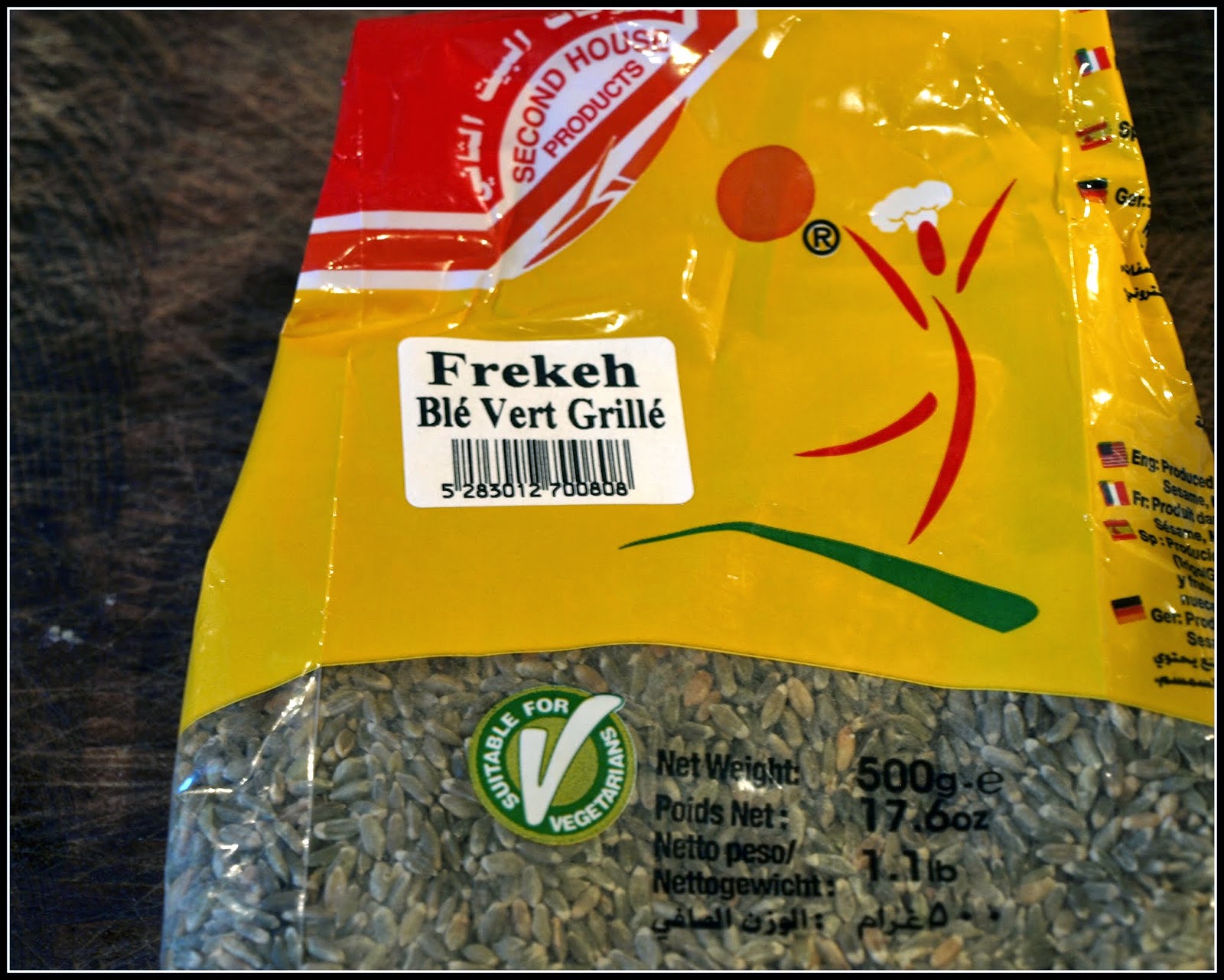 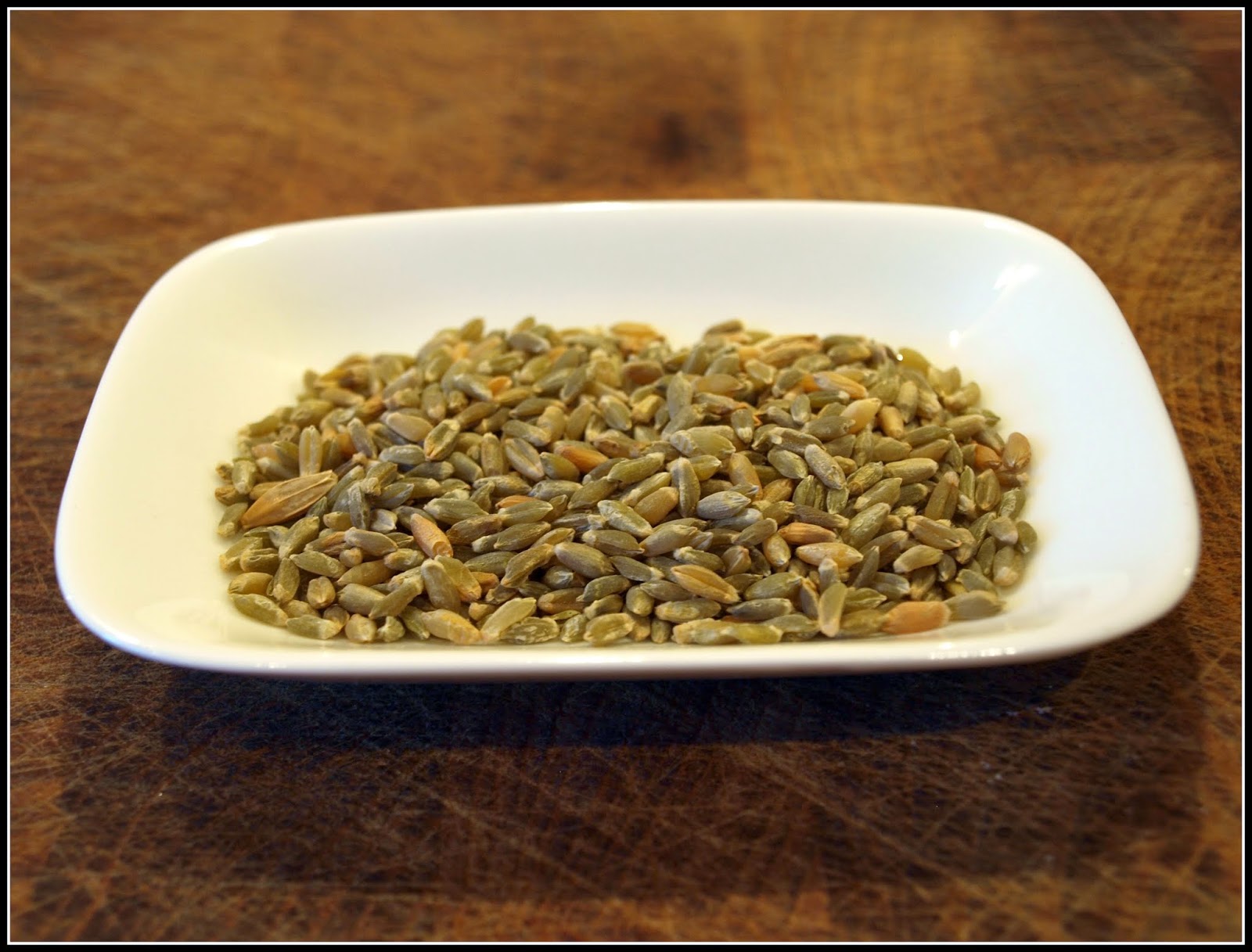 Since I have no experience with cooking this stuff, I followed the manufacturer's instructions - soak in water for 12 hours and then cook for 35 - 40 minutes. I found that after 40 minutes cooking the Frekeh was still very firm, so I gave it a few more minutes. This is what it looks like after cooking: 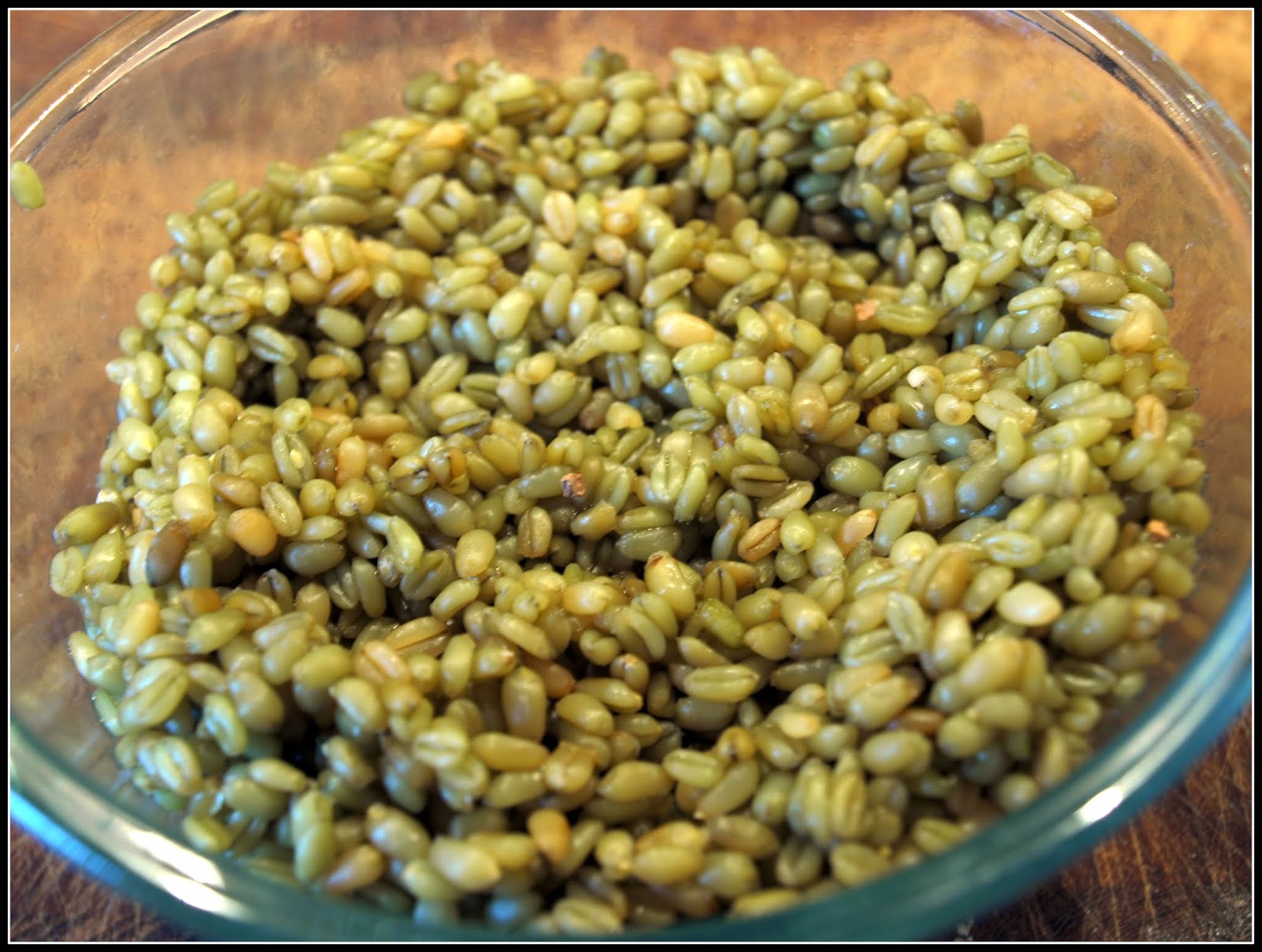 It looks a bit like Pearl Barley, but it is much firmer, with a definite "bite" to it. I hope that is how it is supposed to be!

I made my Frekeh into a Tabbouleh, with lots and lots of fresh Parsley from the garden: 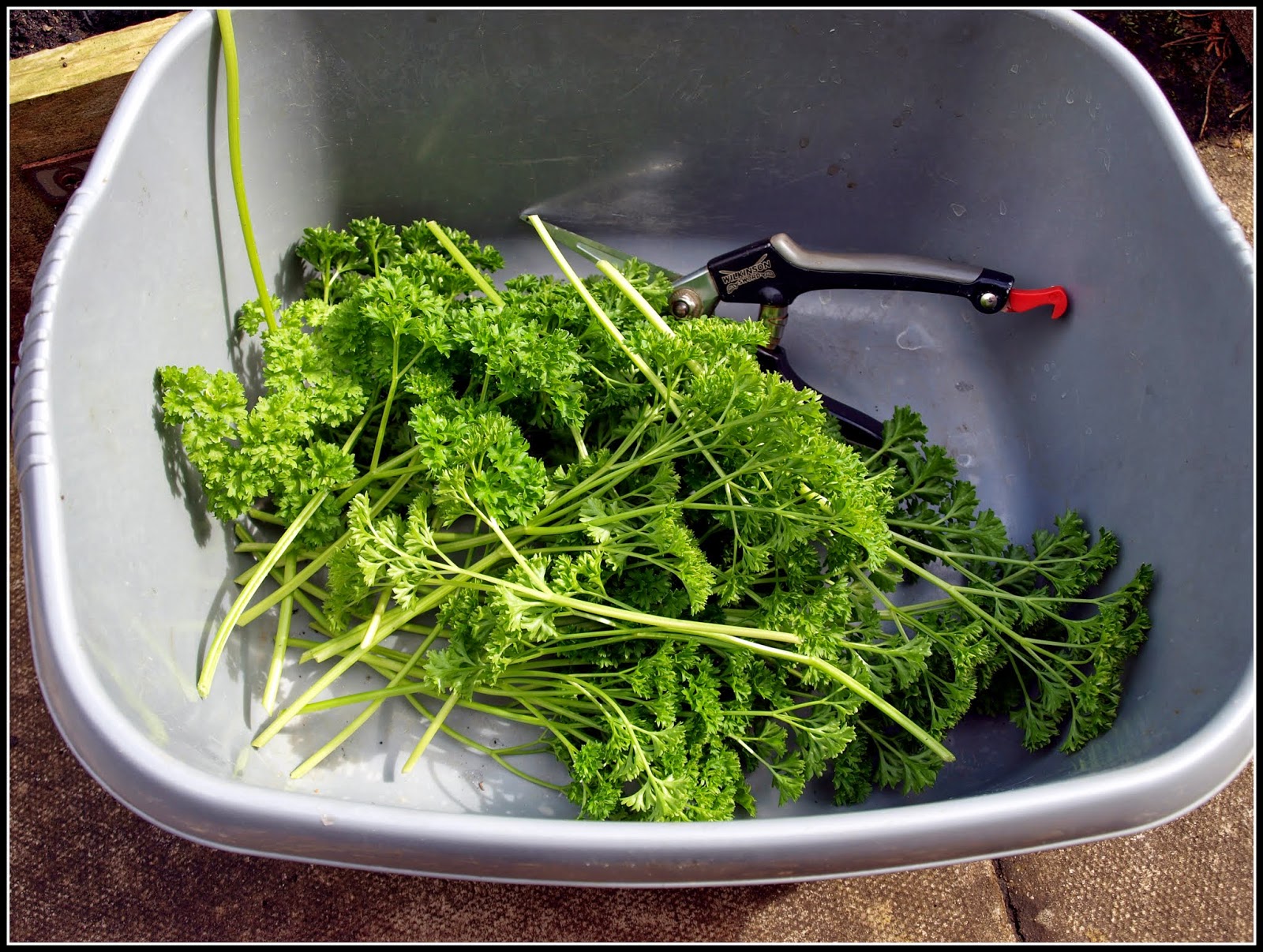 To add a bit more interest (and to be truthful, more "foreignness") to my Tabbouleh I added some Barberries. I'm sure this is NOT authentic, but hey, I was in the mood for experimenting! The Barberry is again something I had seen mentioned in Ottolenghi's books, but I had never encountered the real thing. We bought a small pack of them in the Palestinian grocery store: 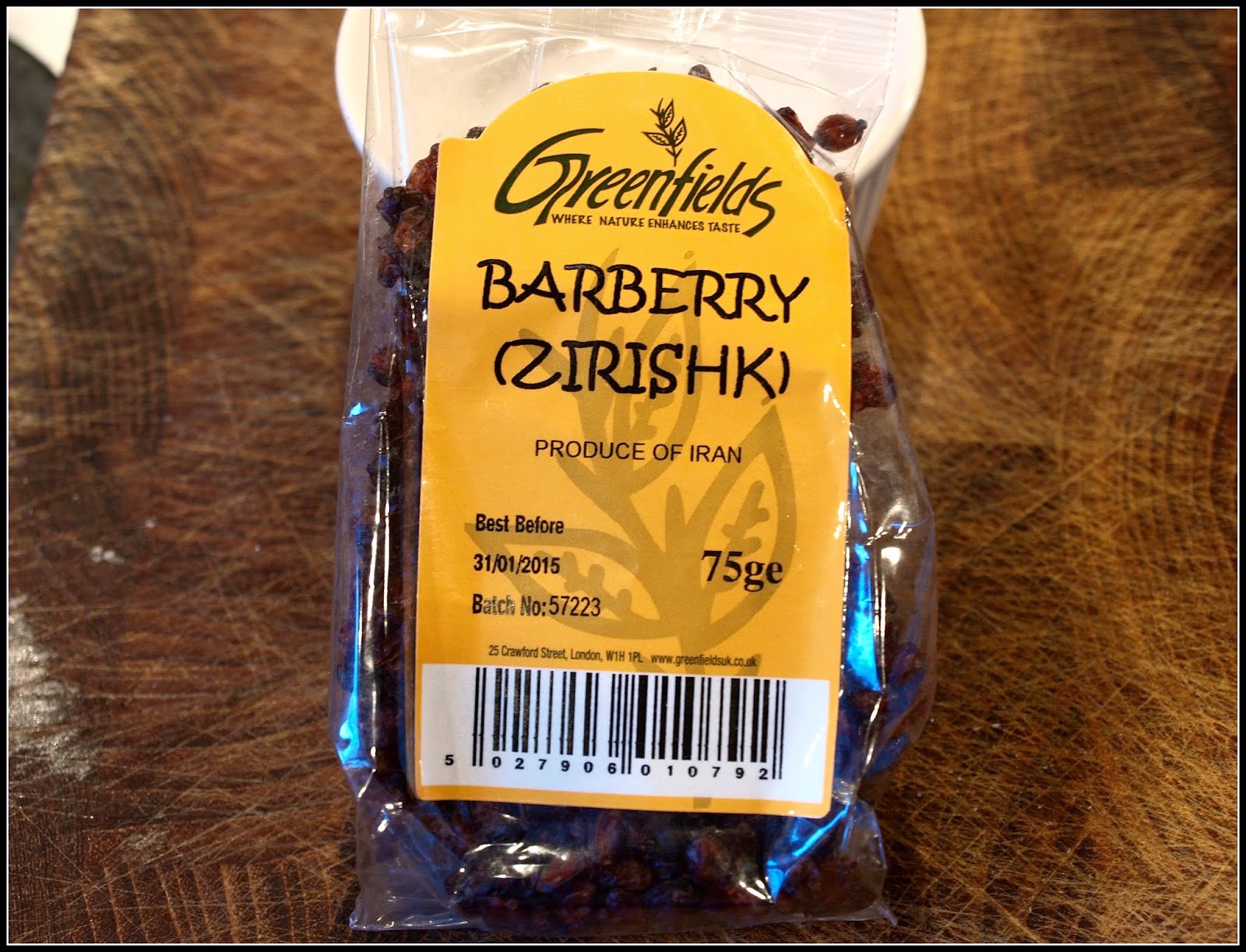 They are sold dried and have to be rehydrated before use. They look very similar to dried Cranberries. Ottolenghi says that Sour Cherries are a reasonable substitute if you can't find Barberries. They are quite sour and he recommends adding some sugar to the water when rehydrating them. (Of course, with Jane being diabetic, I substituted Sweet Freedom). 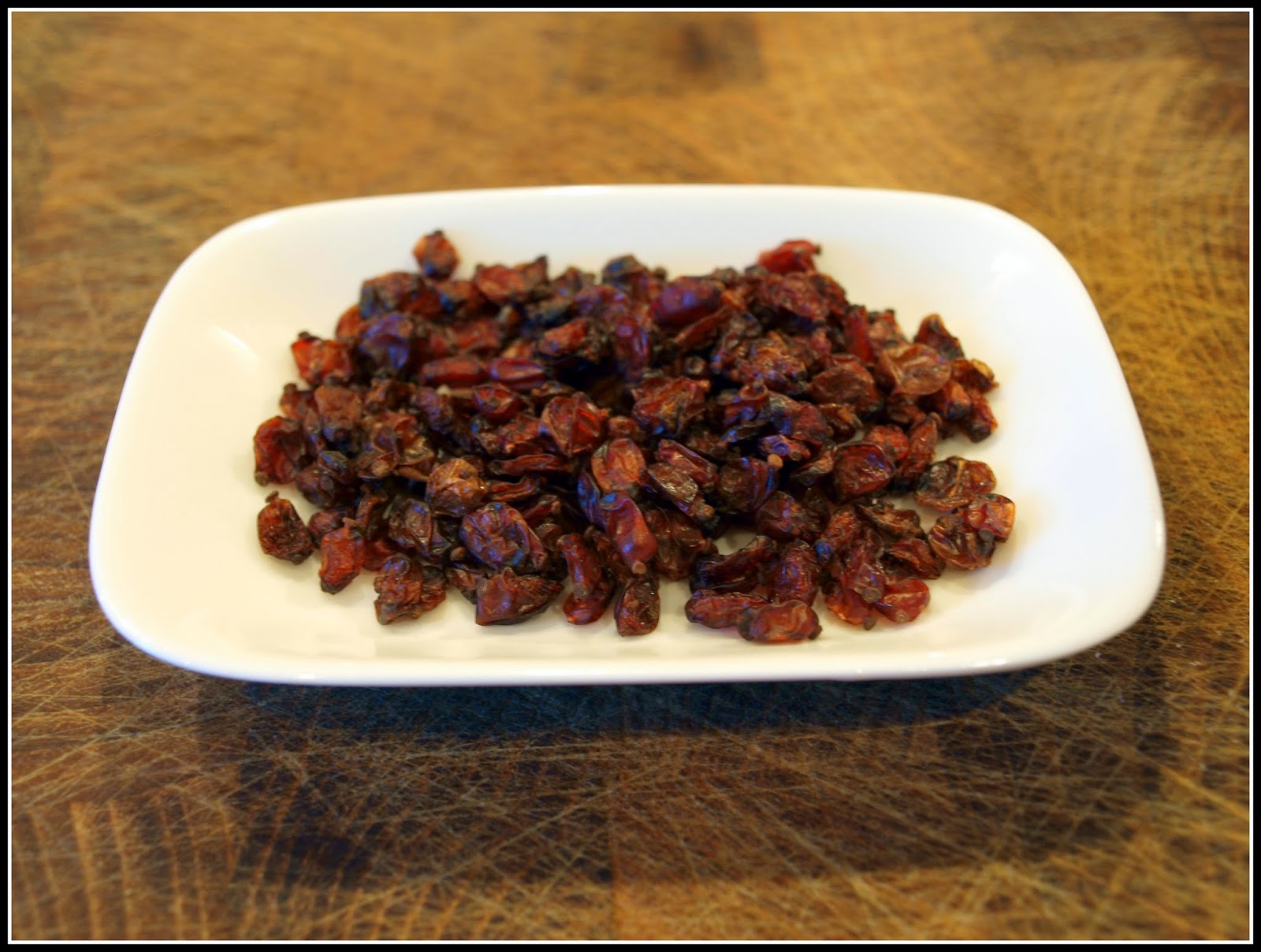 Here is the finished dish: 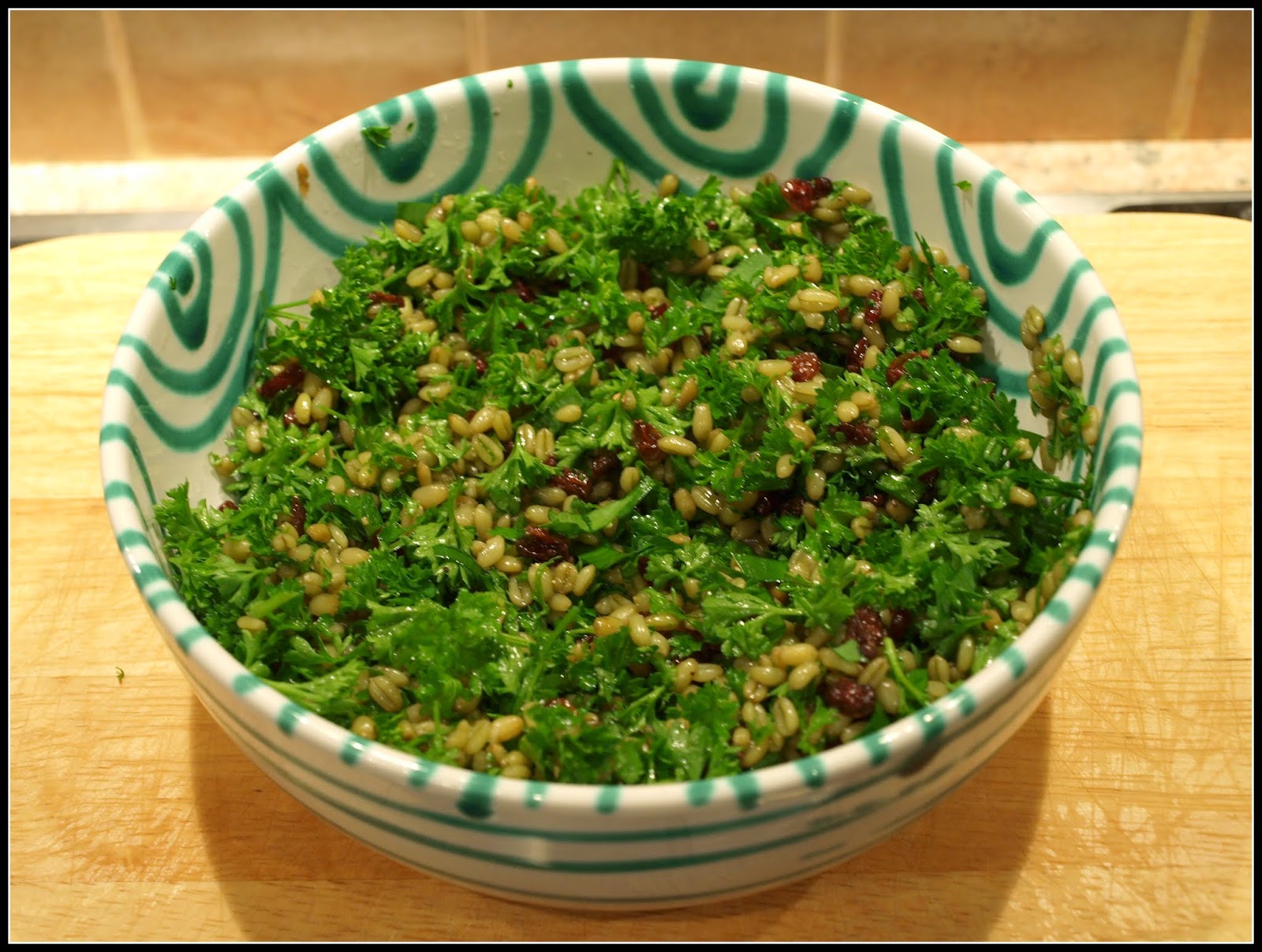 Well, despite all this palaver with making my so-called Tabbouleh, that dish was in fact only a side-dish. The main was some Lamb Chops that I had trimmed and then marinated for several hours in a rub made from olive oil, crushed garlic, black pepper and fresh Mint and Rosemary (the latter two from my garden). 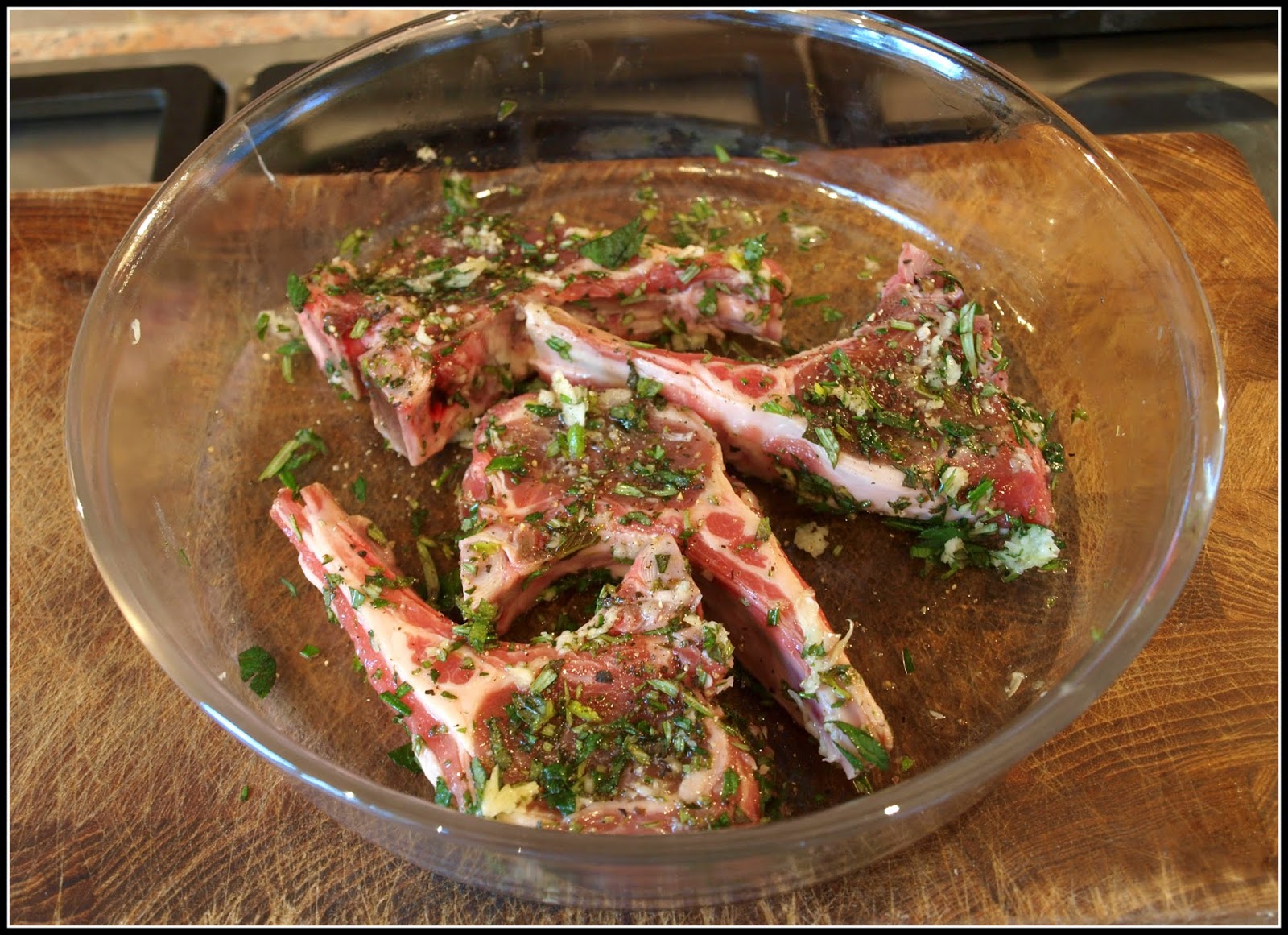 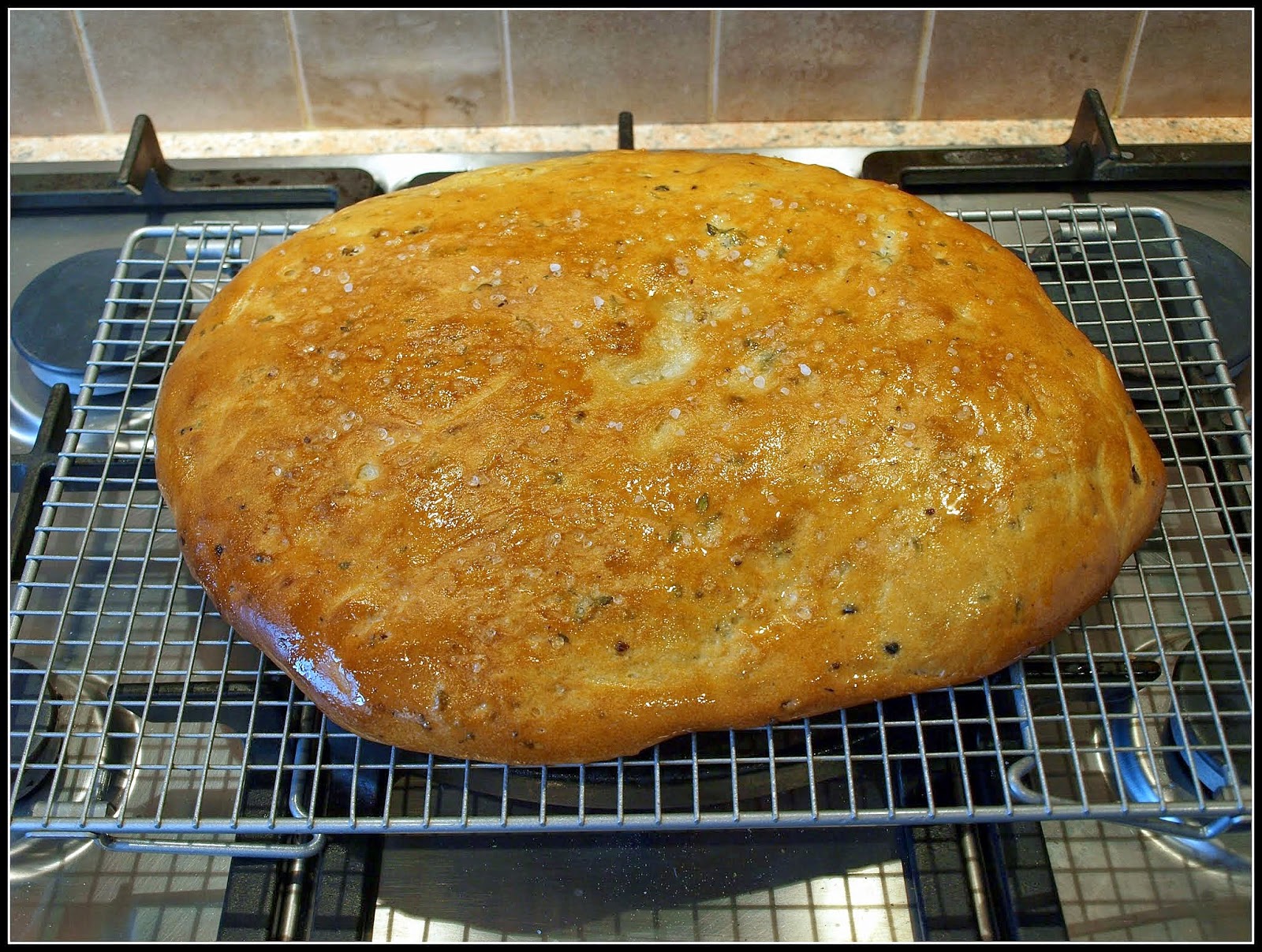 If you would like the recipe for this loaf, you can find it in another post of mine - HERE

I don't have any photos of a "finished dish" this time, but this is the next best thing - the chops sizzling in the searingly-hot griddle pan, with smoke swirling around them: 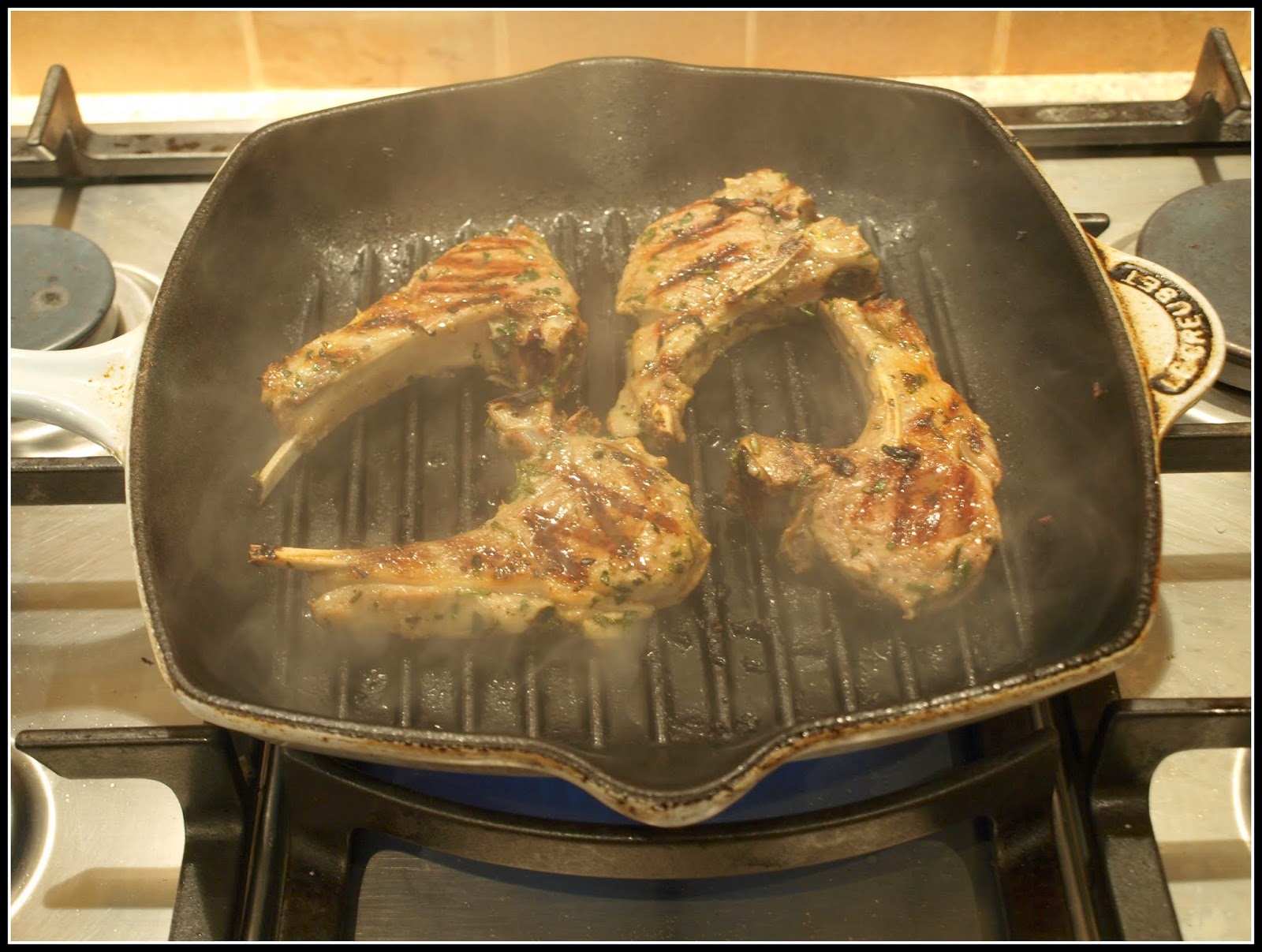 I'll leave you to imagine the sounds and aromas..... (Sorry, vegetarians!)

So what was the verdict? Well, our opinion of the Frekeh was "OK but unexciting". We didn't notice much of the alleged smoky taste. I think I still prefer Bulghur. The Barberries were quite nice - very like dried cranberries - but they weren't really necessary in my Tabbouleh-style dish. It would probably have been more sensible to omit them and concentrate on the fresh taste of Parsley. But (though I say it myself) the bread was excellent - tasty and with a pleasant springy texture - and the chops were deee-licious!

Before I finish today I also want to mention another product we bought at that Palestinian grocery shop: tinned Hummous (or Hommos): 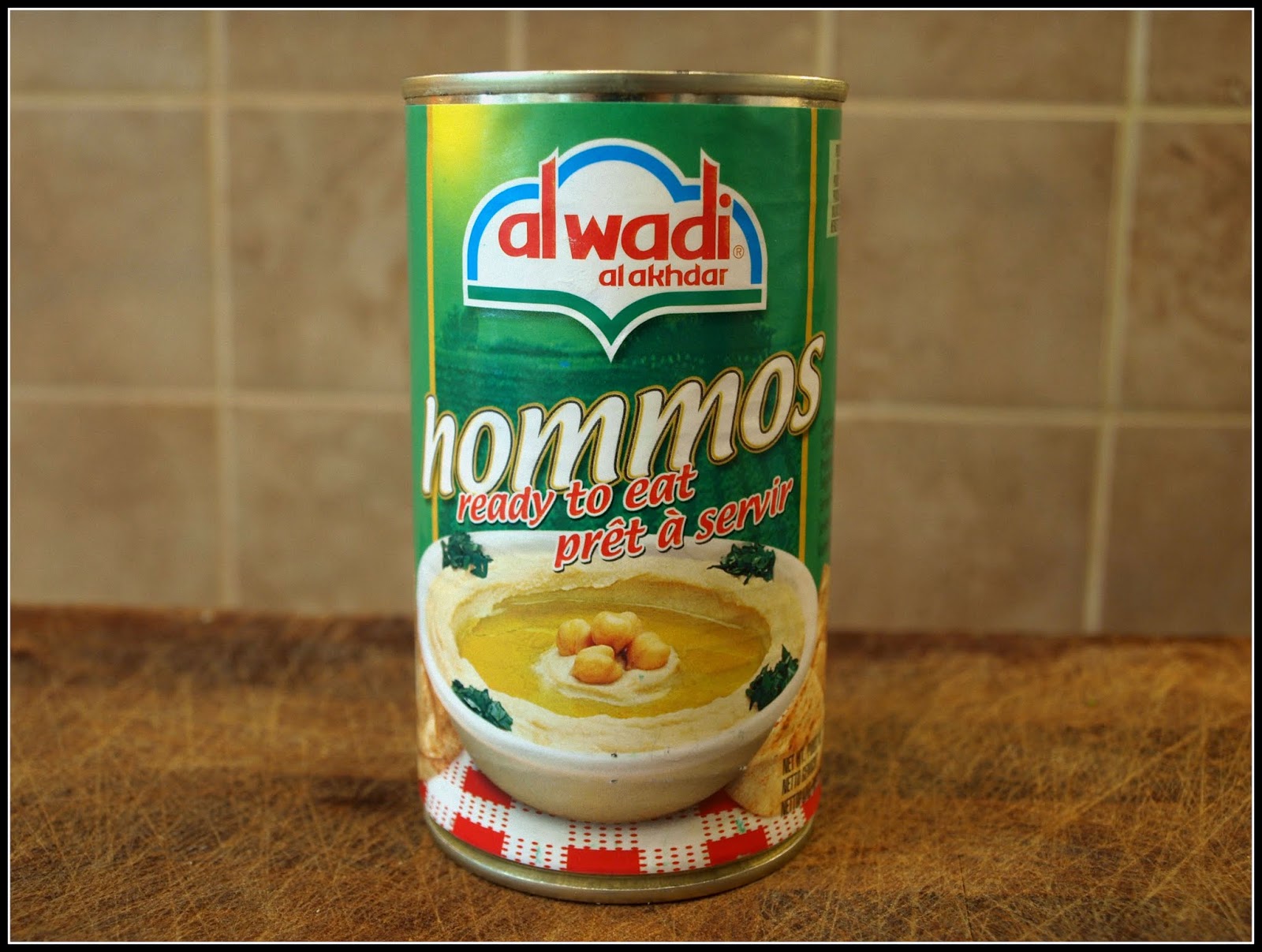 It was unexpectedly good. In the past we have had tinned Hummous that has been rather dry and "chalky", but this one was smooth as silk, and the flavour had a nice hint of lemon. Next time we go to France we'll want to buy a few more tins of this. (Sorry, no pics of the product, only the tin. This was an afterthought!)﻿
Posted by Mark Willis at 12:00