Yay! The first of this year's Asparagus is up. You'll have to look very carefully, but you might be able to see three spears of it in this photo: 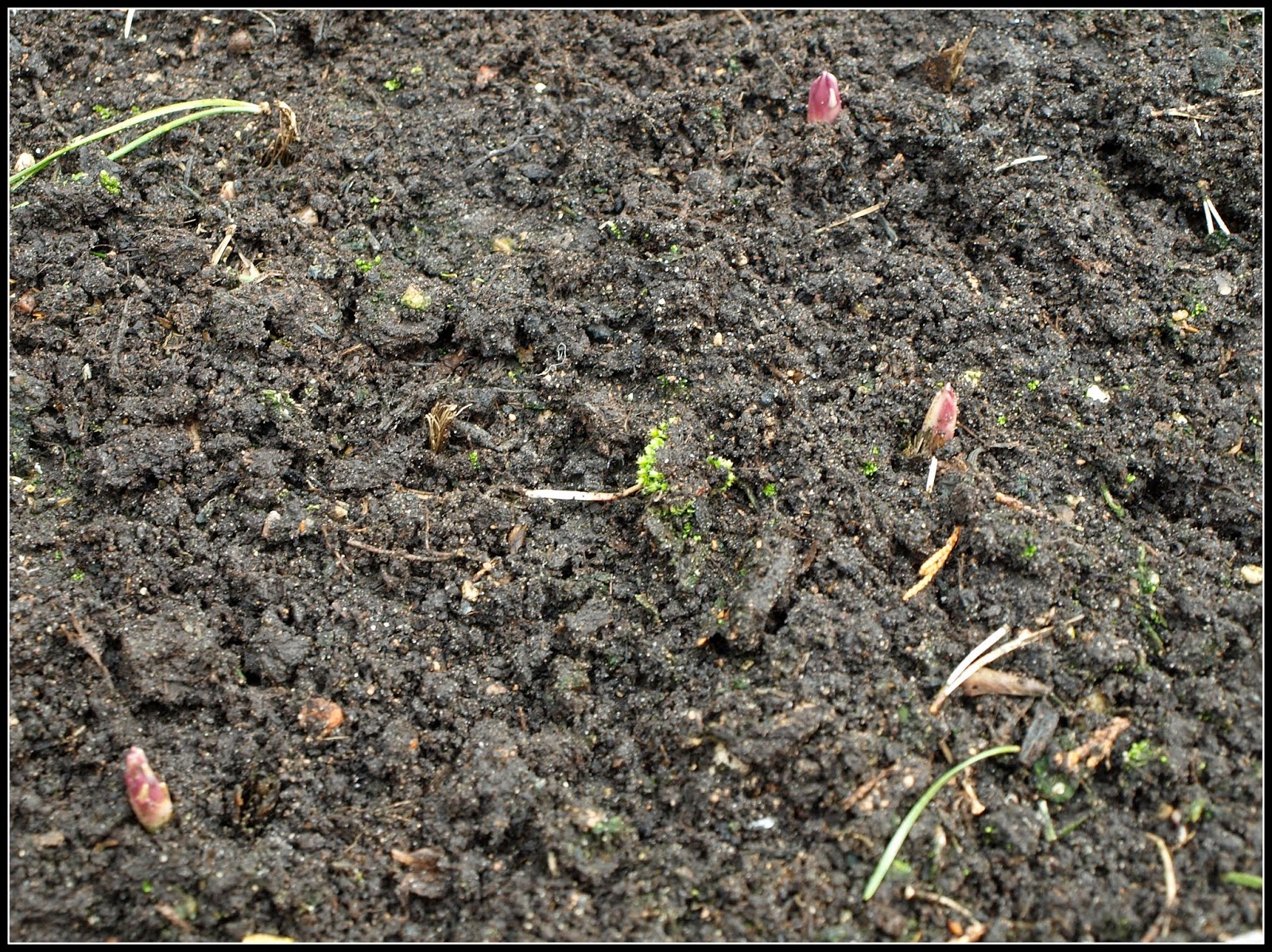 Here's a closer view of one of them: 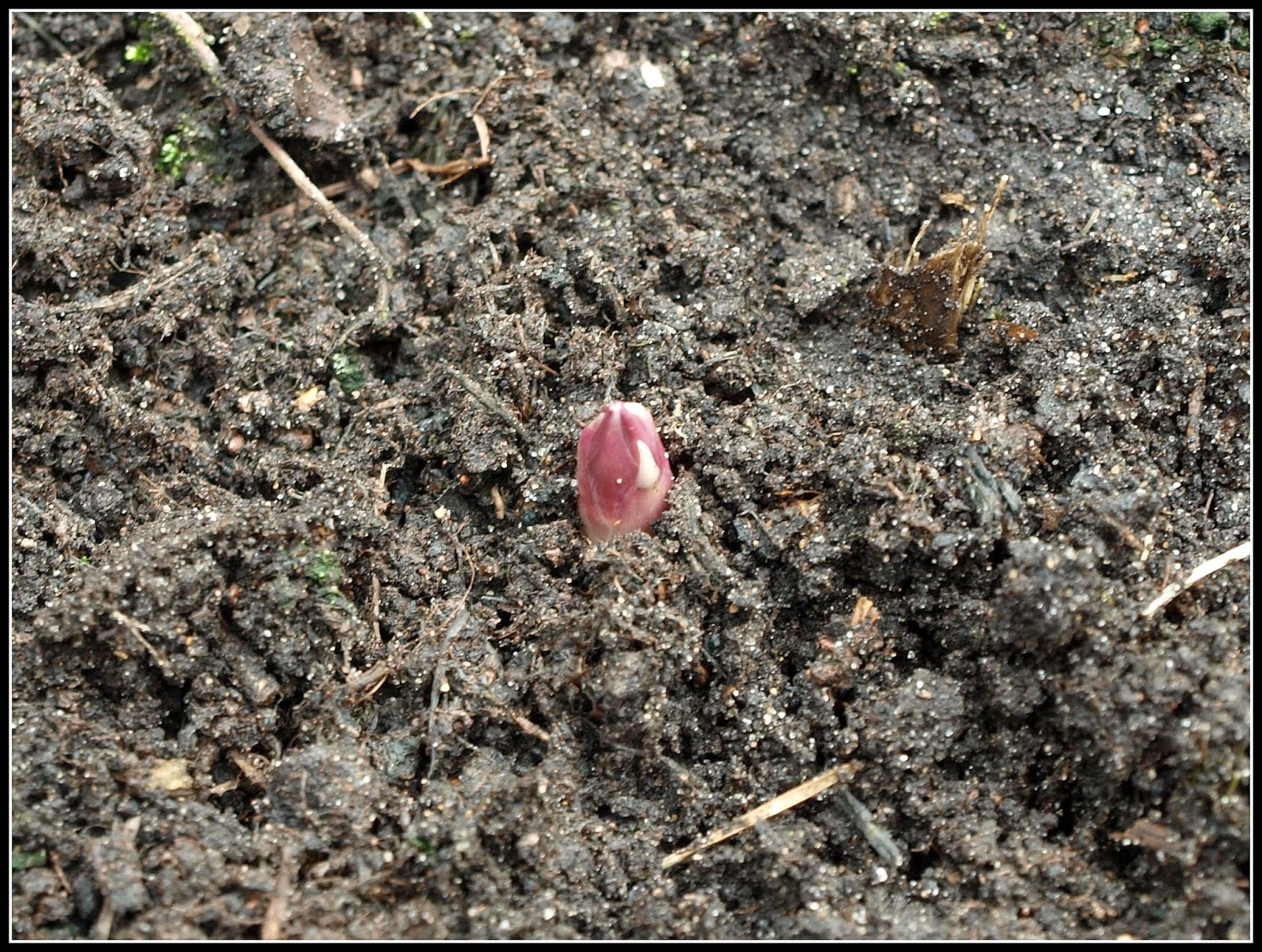 I find that a small number of spears appear quite early in the season. I mean, March is not really prime time for English Asparagus that is not grown in a polytunnel - it's more like May. It's as if the early spears act as "scouts" for the rest of the plants: if they find the conditions up above ground to be suitable they tell their mates "Come on up", but if it is cold, wet and windy they say "I'd stay down there for a bit longer, if I were you". This year I'm going to try something new - as those first spears come up, I'm going to cover them with some cloches. Perhaps this will prolong the cropping season for me?

The tomato seeds I sowed last weekend have mostly germinated now, so I have thinned them to one seed per pot, choosing to keep the strongest-looking one. I don't necessarily choose the biggest one, because even seeds sown in the same pot may germinate at different times. The shorter, stocky ones are usually best, and any that look leggy are candidates for removal. 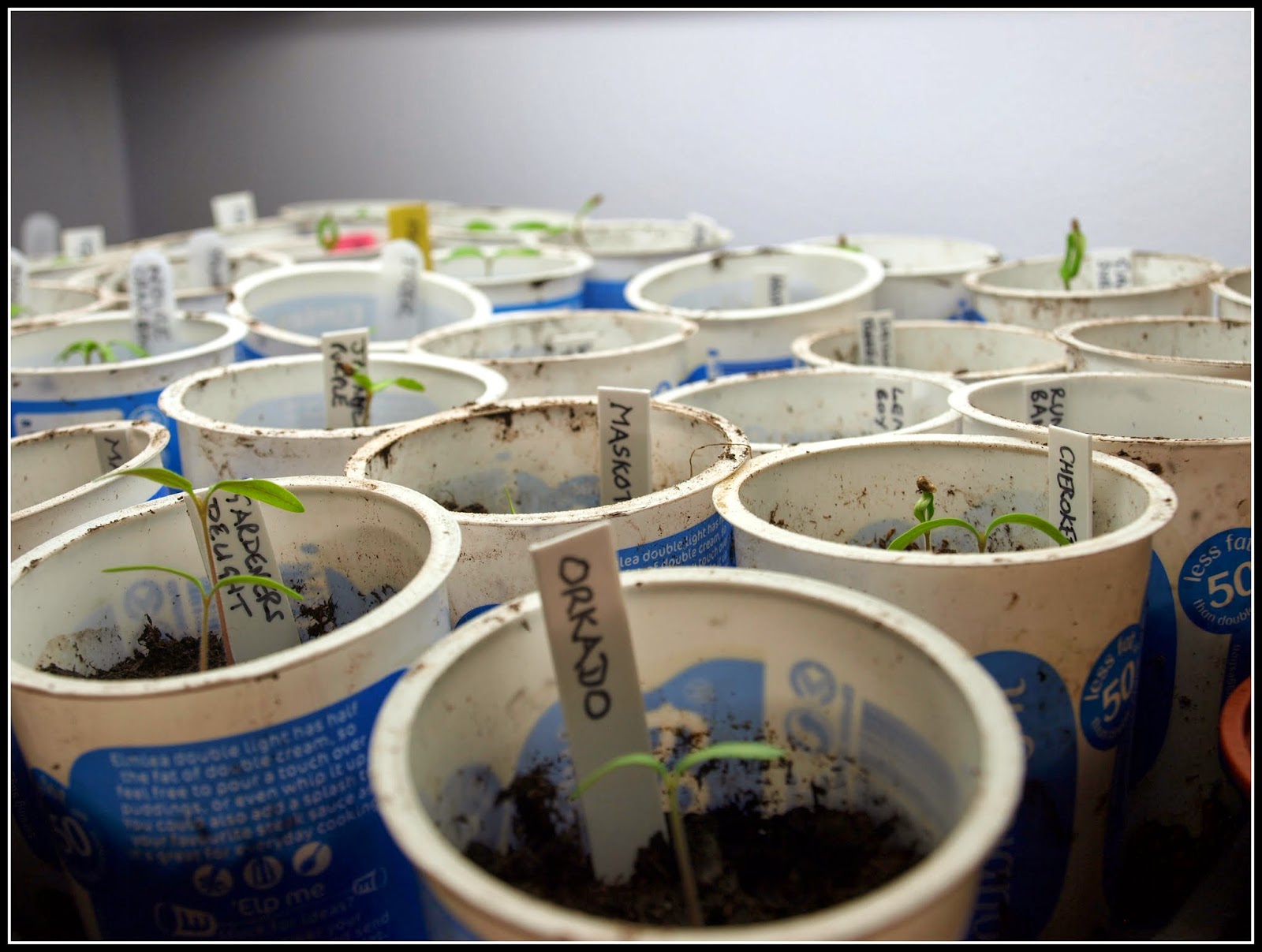 I will keep the little tomato plants in the Growlight House for at least another week or two, maybe longer, so that they get enough light in their early days and do not go tall and spindly.

I also have a couple of new arrivals in the Chilli department. This one is "Aji Limon", a variety that has lemon-yellow fruits. I grew it last year and was impressed with not only its beautiful colour, but also its citrussy flavour. I hadn't initially planned to grow it again this year (simply because I wanted to try some other varieties), but looking back through my photos I decided that I couldn't live without it, since it is so incredibly photogenic! (Not just yet, though...) 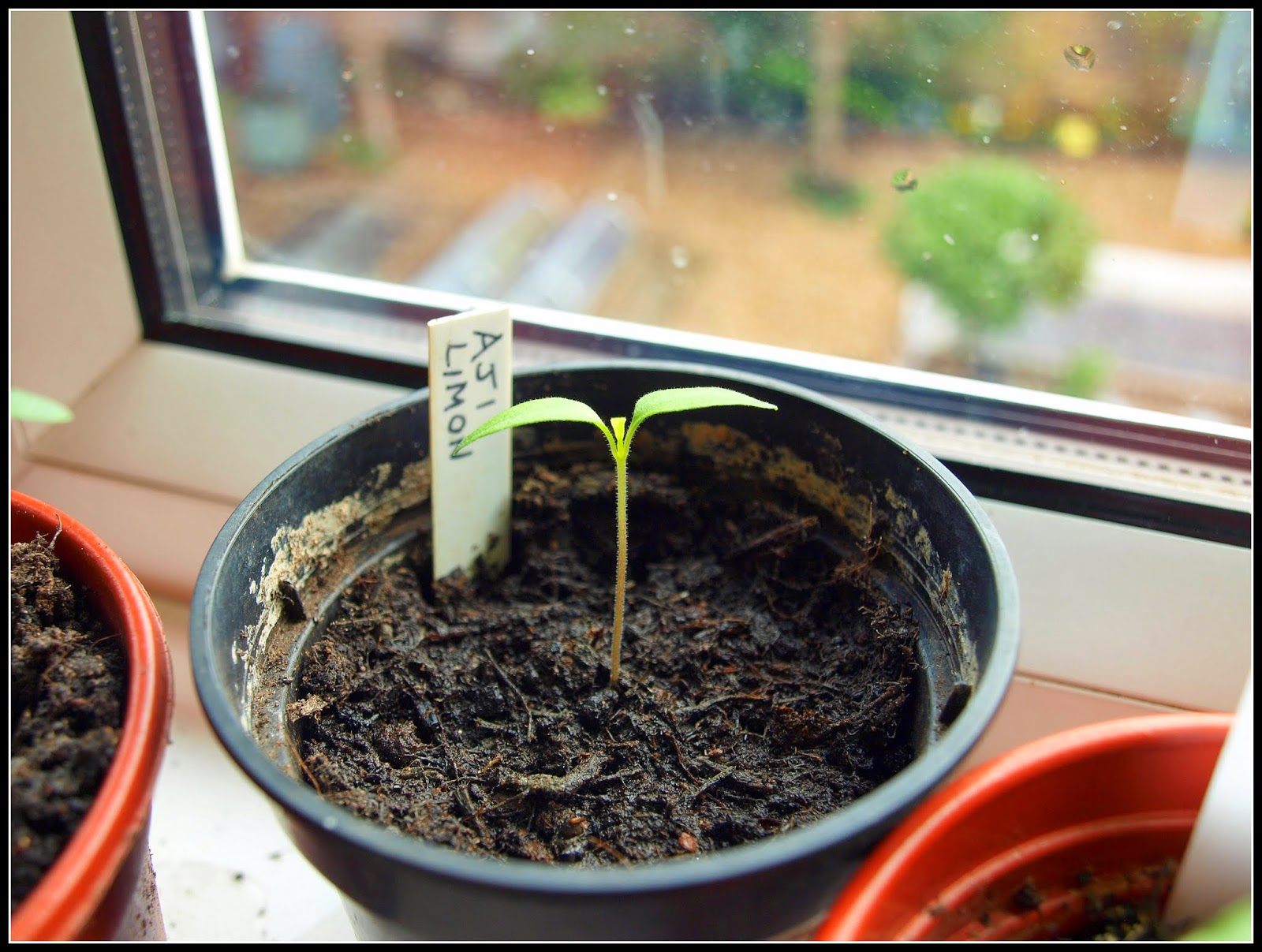 I am also proud that I have finally managed to get some of my home-grown "Nosferatu" chilli seeds to germinate. Again, you'll have to look carefully, because the seeds are only at the "just germinated" stage: 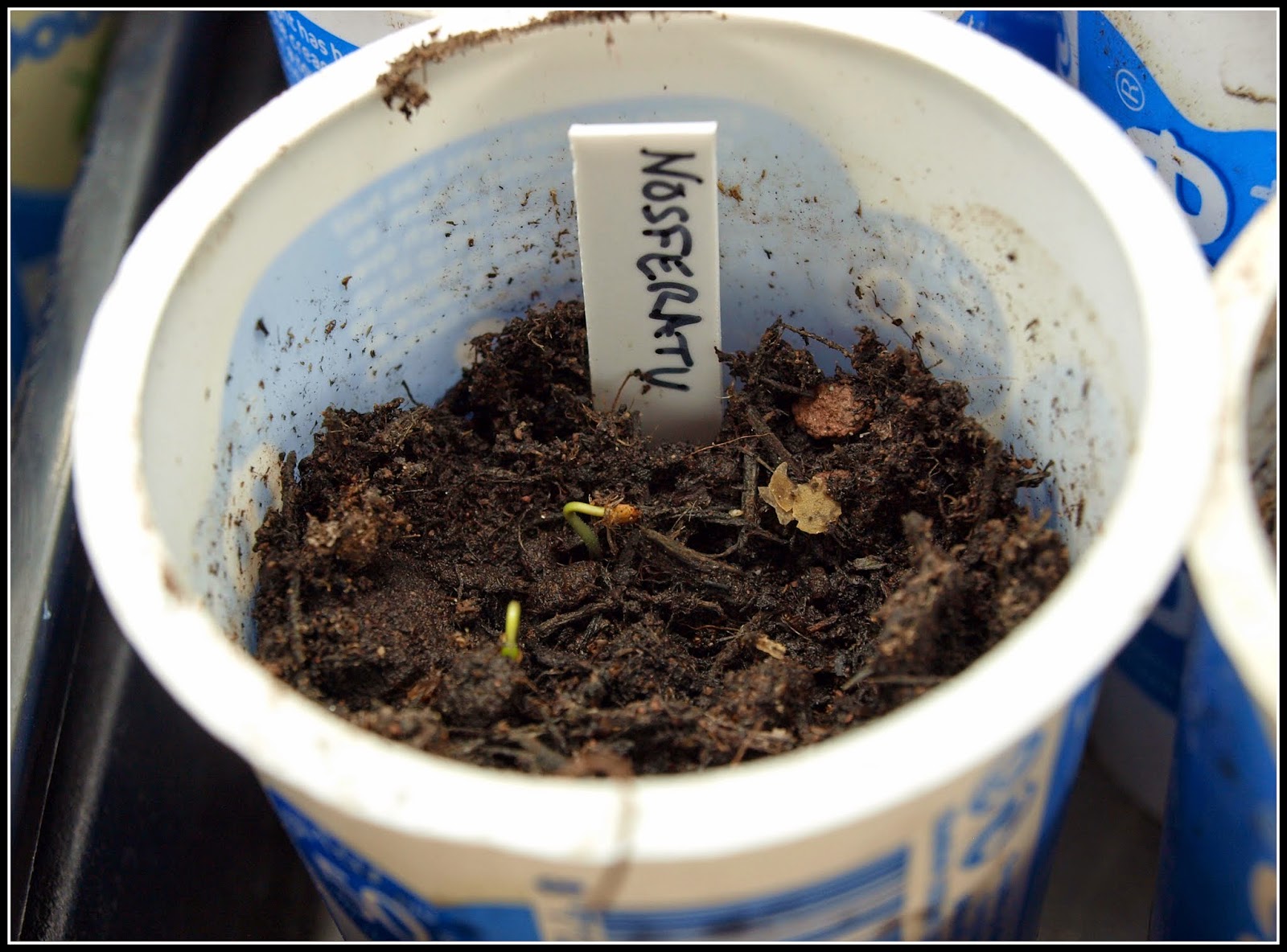 These were from the third batch I sowed. I tried a variety of different methods to get them to germinate: the first one went into the airing-cupboard; the second was on a bedroom windowsill directly above a radiator; and the third one was under the growlights. I don't know whether this is significant or not, but the third sowing was the only one which was not inside a plastic bag (which is normally recommeded for increasing humidity).﻿

By the way, the bigger chillis got their first day outside yesterday. It was a beautiful sunny day - if a little cold and windy - so they spent the day in the garden, sheltered by one of the plastic greenhouses. They came indoors again in the evening, though. 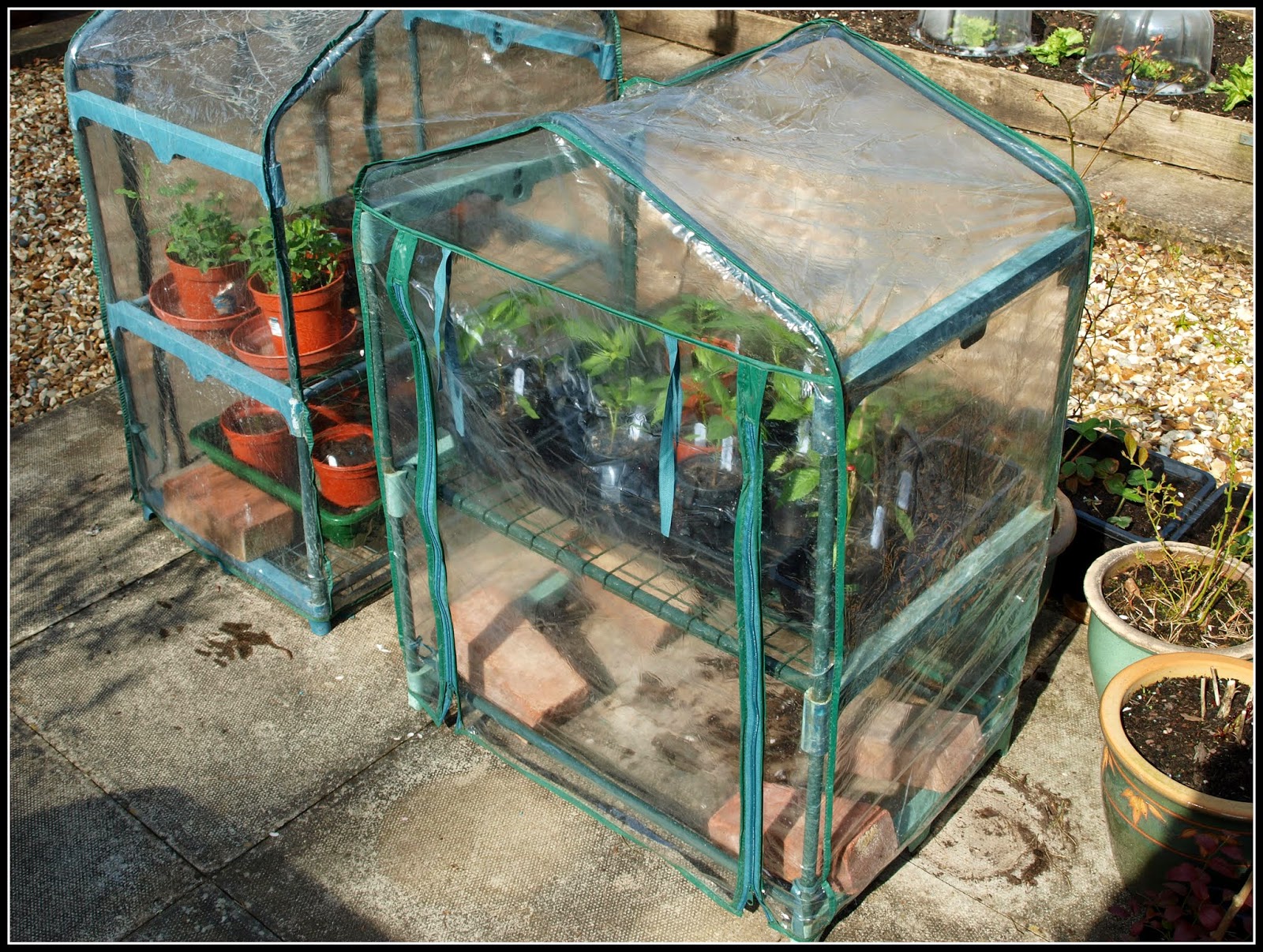 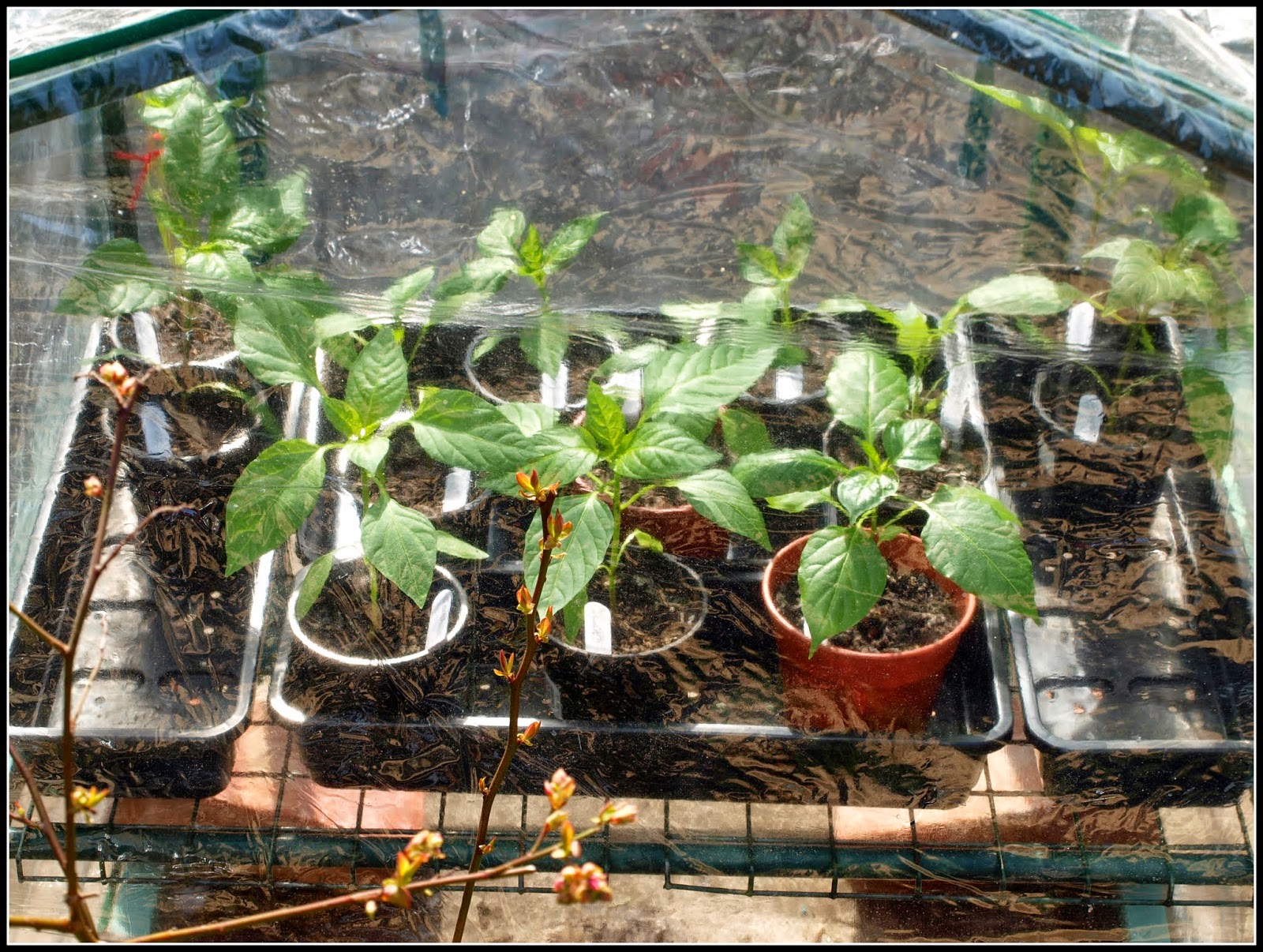