One of the tasks I do at this time of the year (weather permitting) is the pruning of the Raspberries. Mine are "Autumn Bliss", a late-fruiting primocane variety - meaning that the fruit is borne on the current year's wood (as opposed to the previous year's in a floricane).

Until the weekend, my Raspberries looked like this - a jumble of brown dessicated canes, with just one or two leaves left. 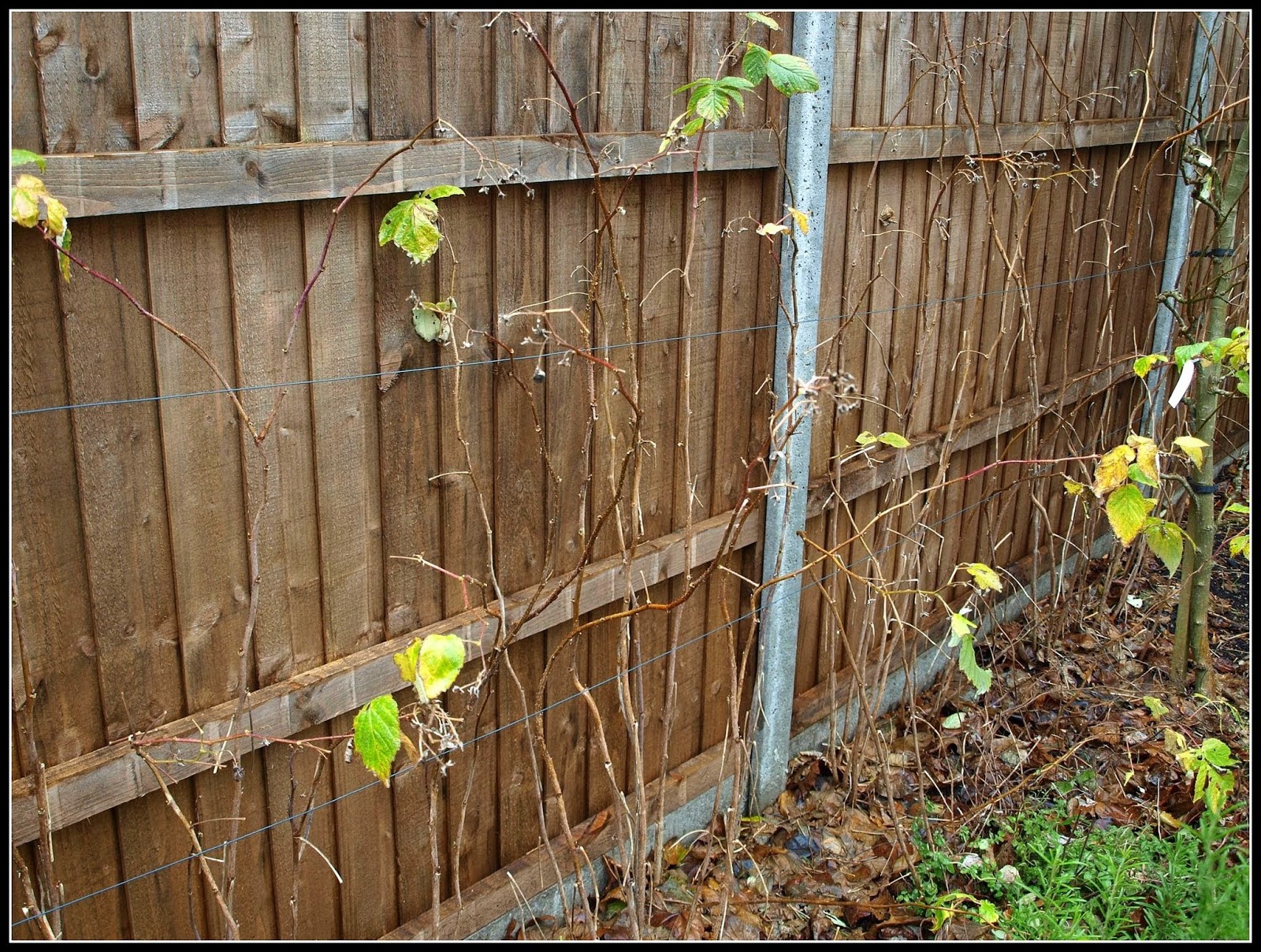 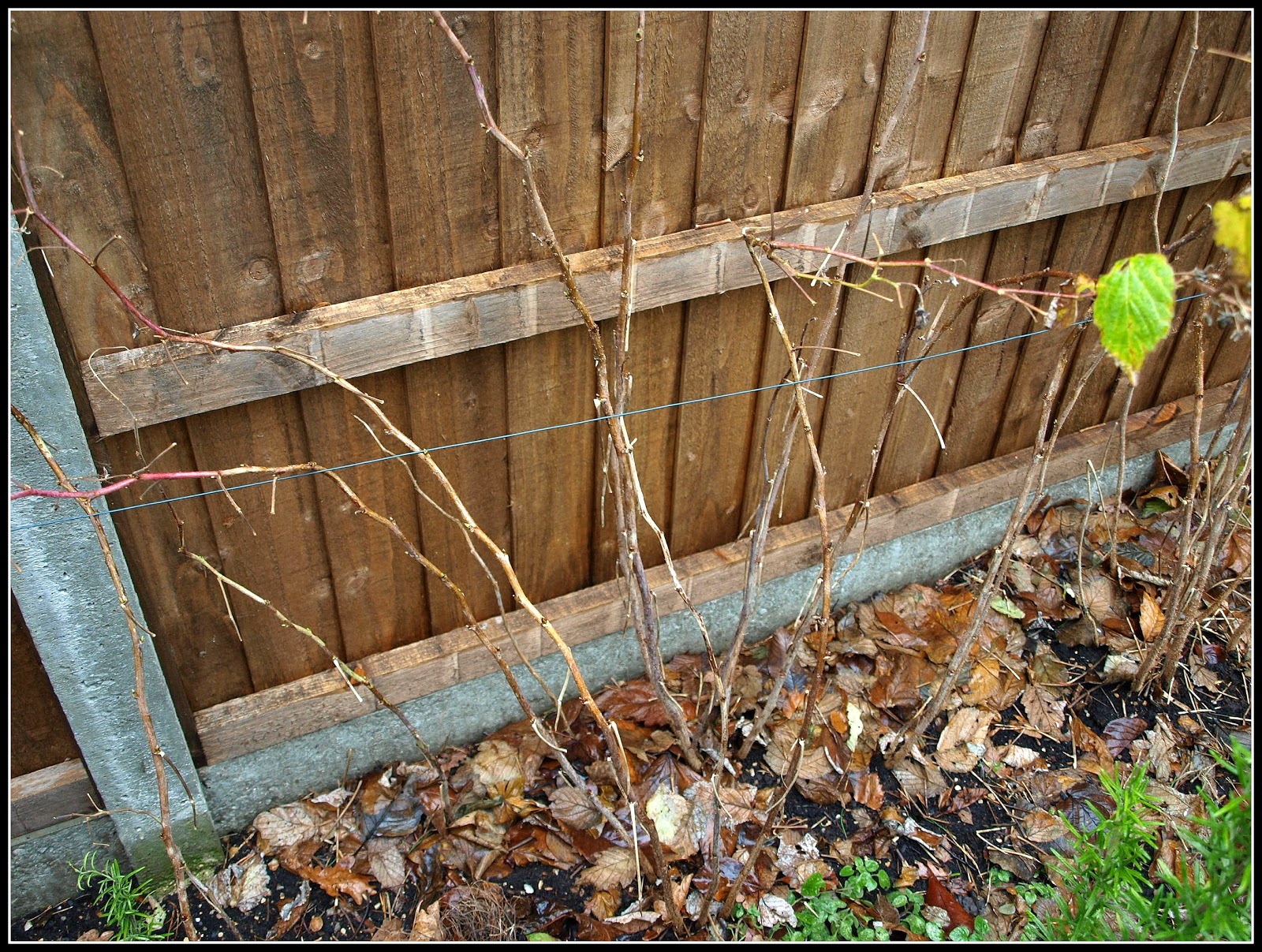 Pruning them is simplicity itself (as long as you wear a stout pair of gloves!). You just use a pair of secateurs to snip the canes off at ground level, and dispose of them. It's not considered good practice to compost the canes, because their hollow stems may be harbouring any manner of bugs and diseases. I put mine in old compost bags and take them to the Council tip.

So this is what the Raspberry area looks like now, with the canes removed and most of the soggy fallen leaves raked out: 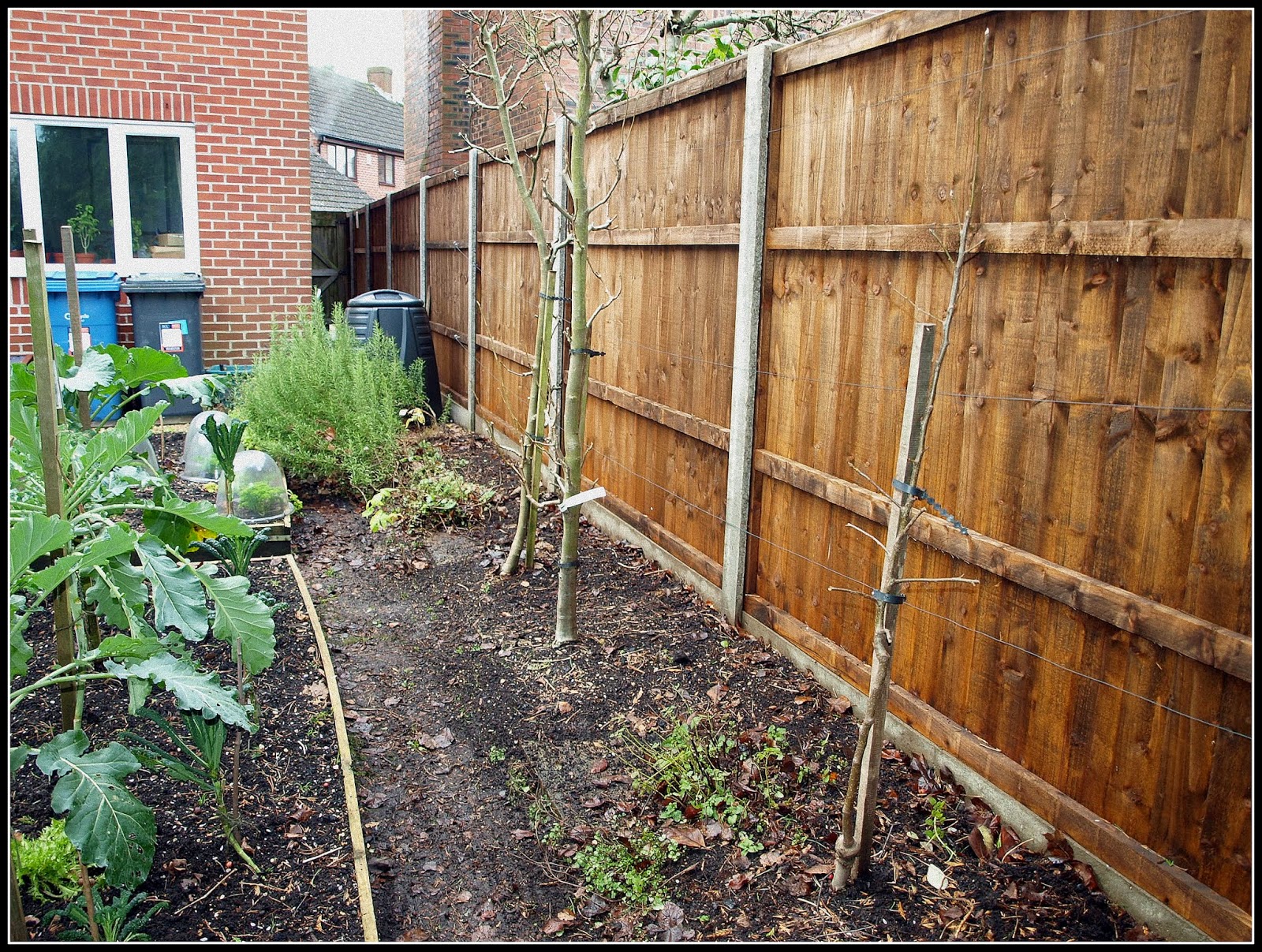 The Raspberry plants are not visible, are they? However, they will soon put up new shoots and the cycle will begin again. Last year was a very poor year for Raspberries (for me, at least). I had a very small crop of decidedly second-class berries. I'm blaming the weather, as usual! This year will be better. (There, if I say it often enough I'll begin to believe it.)

Of course the removal of the Raspberry canes made it even more obvious that the Apple trees needed pruning too. I have one which is several years old now, a "Scrumptious" which is trained as a Minarette (kept very slender), but last year I got two more trees. One is a "Bramley", which is planted quite close to the older tree, (in the foreground of the photo above) and the other is a "Gala". The latter is still a very small sapling. Jane won it in some competition or other, and I just plonked it in a pot because I didn't plan for it and I still haven't really decided where to put it. "Gala" is apparently one of the most popular types of apple ever, but I must say it is not one that I would have chosen to buy. Maybe I'll just keep it in a pot on the patio.

Anyway, pruning... With a Minarette the aim is to keep the tree very thin by repeatedly pruning the branches to just a few inches long. You cut them back to just above a fruiting bud, like this: 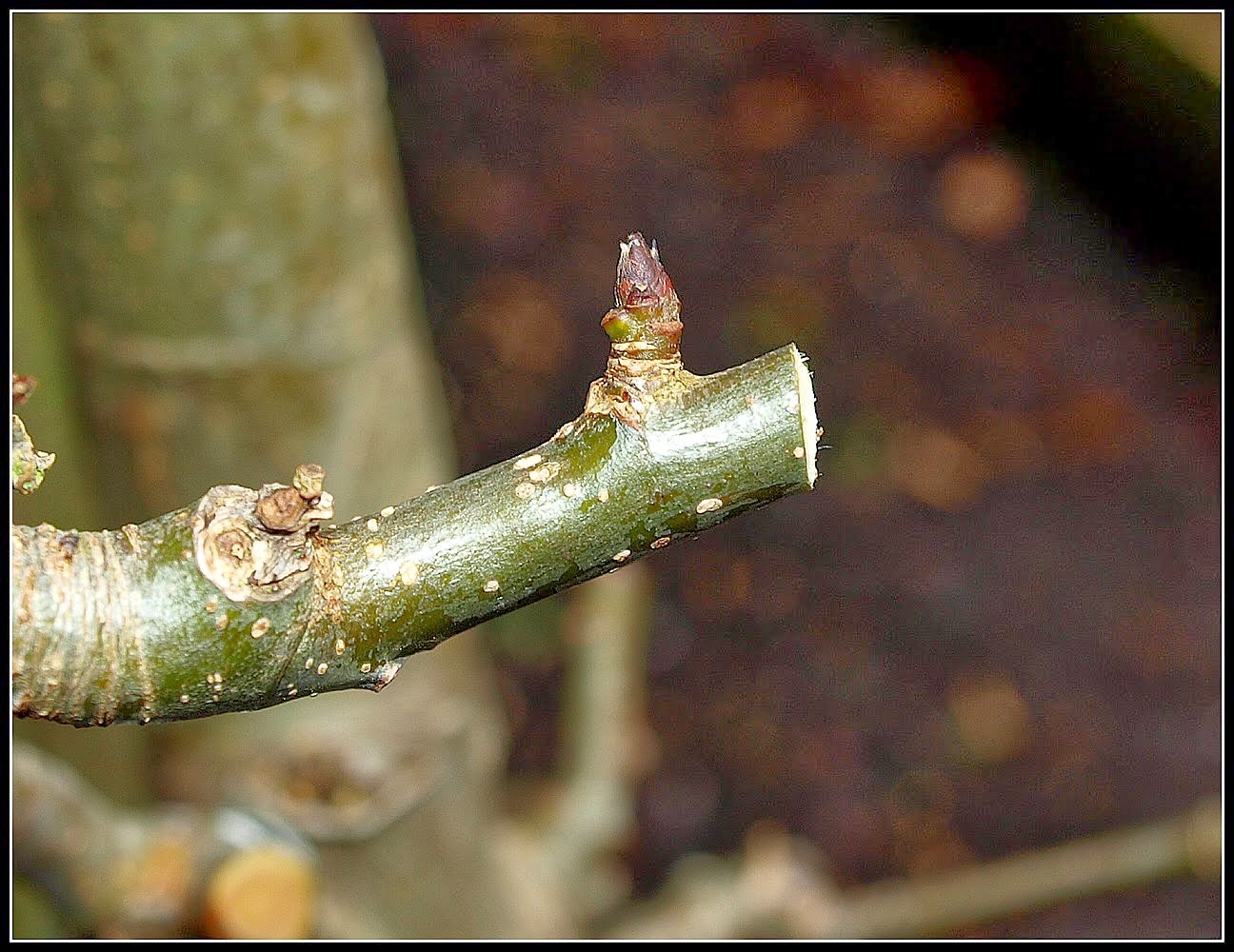 When I came to this one, I was a bit unsure what to do. I really wanted to remove the bulbous bit above the two buds, but I was reluctant to risk damaging the buds with my secateurs, so in the end I just trimmed off a long thin twig growing vertically from the bulbous bit and left it like this. 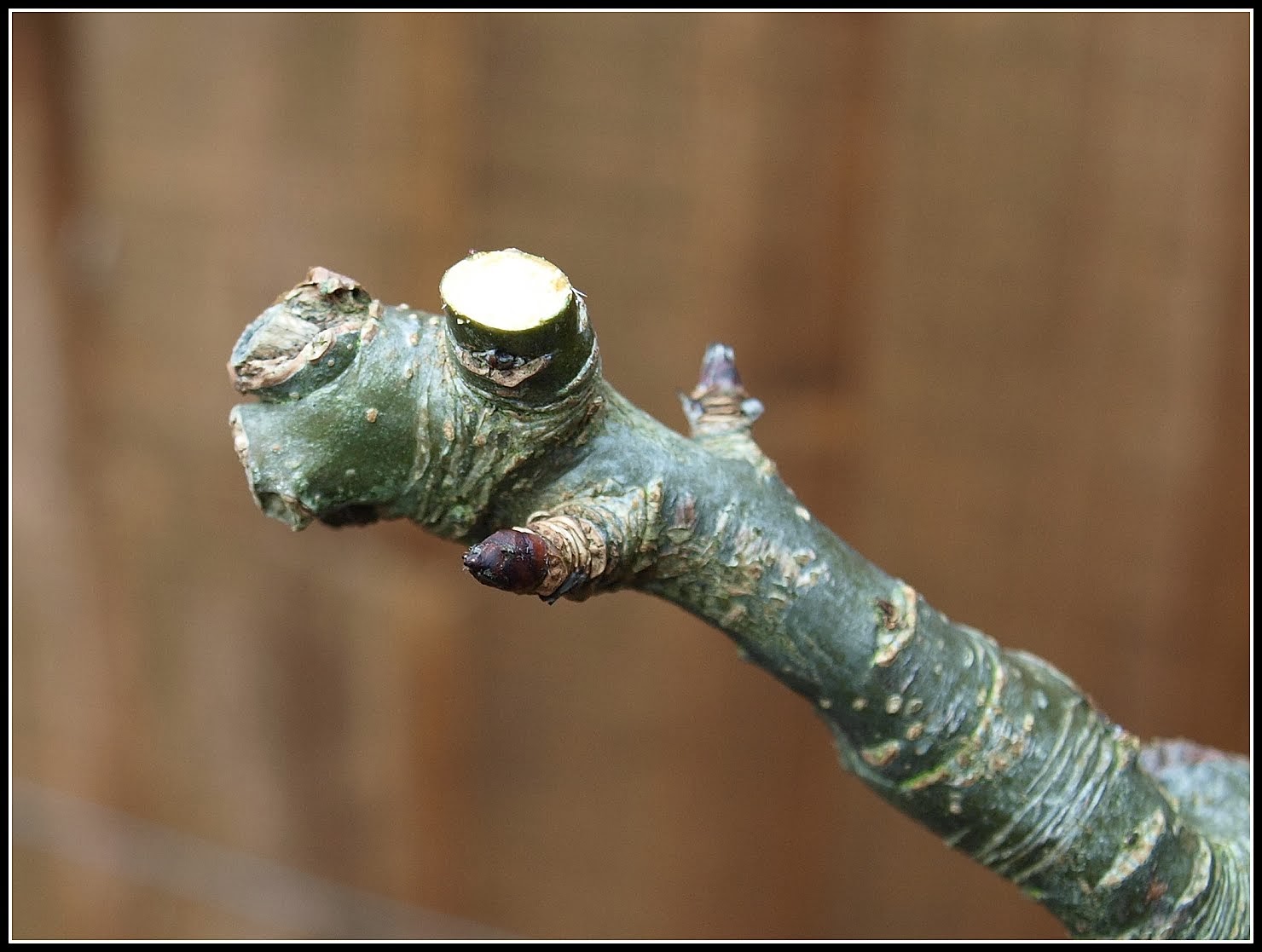 ﻿
Well the Apple trees are all done now, but I have left the Pear for another day. It is a bit bigger, and has masses of shoots, so it will be more time-consuming to prune. Maybe next weekend?