Towards the end of the Summer of 2012 I bought a very bedraggled little "Scotch Bonnet" chilli plant, for 50p in a Garden Centre sale, but I administered a lot of TLC and nurtured it through the Winter. Last year it really thrived. It grew so huge that I had to prune it several times, and it went on to produce loads of really fiery hot fruit. Following on from this success I determined to attempt a similar thing this Winter. I duly bought two chilli plants from the same Garden Centre as before (fairly cheaply, but not at the same knock-down price)﻿, and potted them up. One was a "Red Habanero" and the other was a "Nosferatu".

They went on to produce a welcome, but modest harvest of very handsome fruits:


However the weather soon obliged me to bring the plants indoors or lose them. Our spare bedroom's windowsill became a temporary greenhouse.

Reading up about over-Wintering chillis I learned that it is recommended that you prune them very hard so that they don't lose too much energy through transpiration. I applied the technique and hoped for the best. From then on it was just a case of doing an occasional bit of watering. I added a bit of "Baby Bio" houseplant food, because that's what I always feed my houseplants with!

My efforts have met with variable success. The old Scotch Bonnet seems to have given up the ghost, as has my Numex Twilight. Did I mention Numex Twilight? No, I thought not...

But the Nosferatu and Red Habanero have done better. The Habanero is very vigorous, and has already put out lots of new foliage:


Whereas the Nosferatu only has a few fresh leaves so far, but has optimistically produced a couple of  flowers: 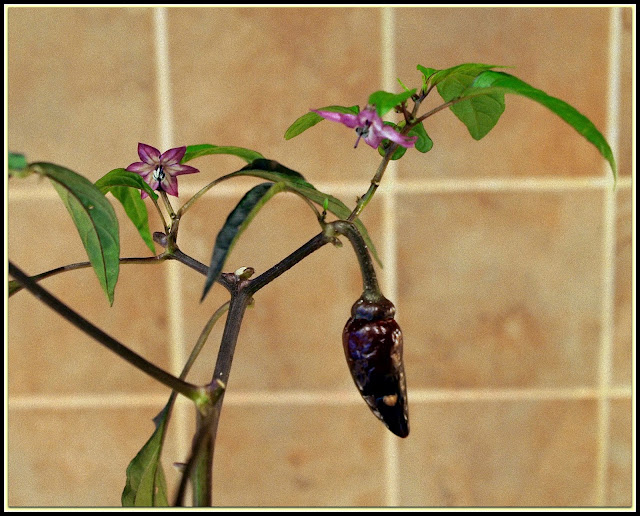 The slowly-shrivelling fruit you see in the photo above ( the last remaining one) will hopefully yield a few seeds, and if it does I plan to sow them in order to "maintain the succession", as it were.

I would be interested to hear if anyone else reading this has any experience of over-Wintering chillis, and if so, how they did it.
Posted by Mark Willis at 12:00