Have you succumbed to the urge?

At this time of year most gardeners feel a strong urge to sow or plant something. Anything, in fact. We all know that in 99% of cases it is better to wait a couple of months, but we all want to have a go at something as soon as possible. Well, even if you haven't succumbed to that urge, I have...

I'm fortunate in having a Growlight House, in which I know I can germinate small pots of seeds and grow them on until they are quite a decent size. I shall certainly be using it to start my main crop of chillis and tomatoes next month, but for now I have other plans. I am using it to grow some plants that I am confident I will be able to keep indoors in positions that will get enough light. For instance, I have two pots of Basil, one of which I have taken out of the GH to photograph. 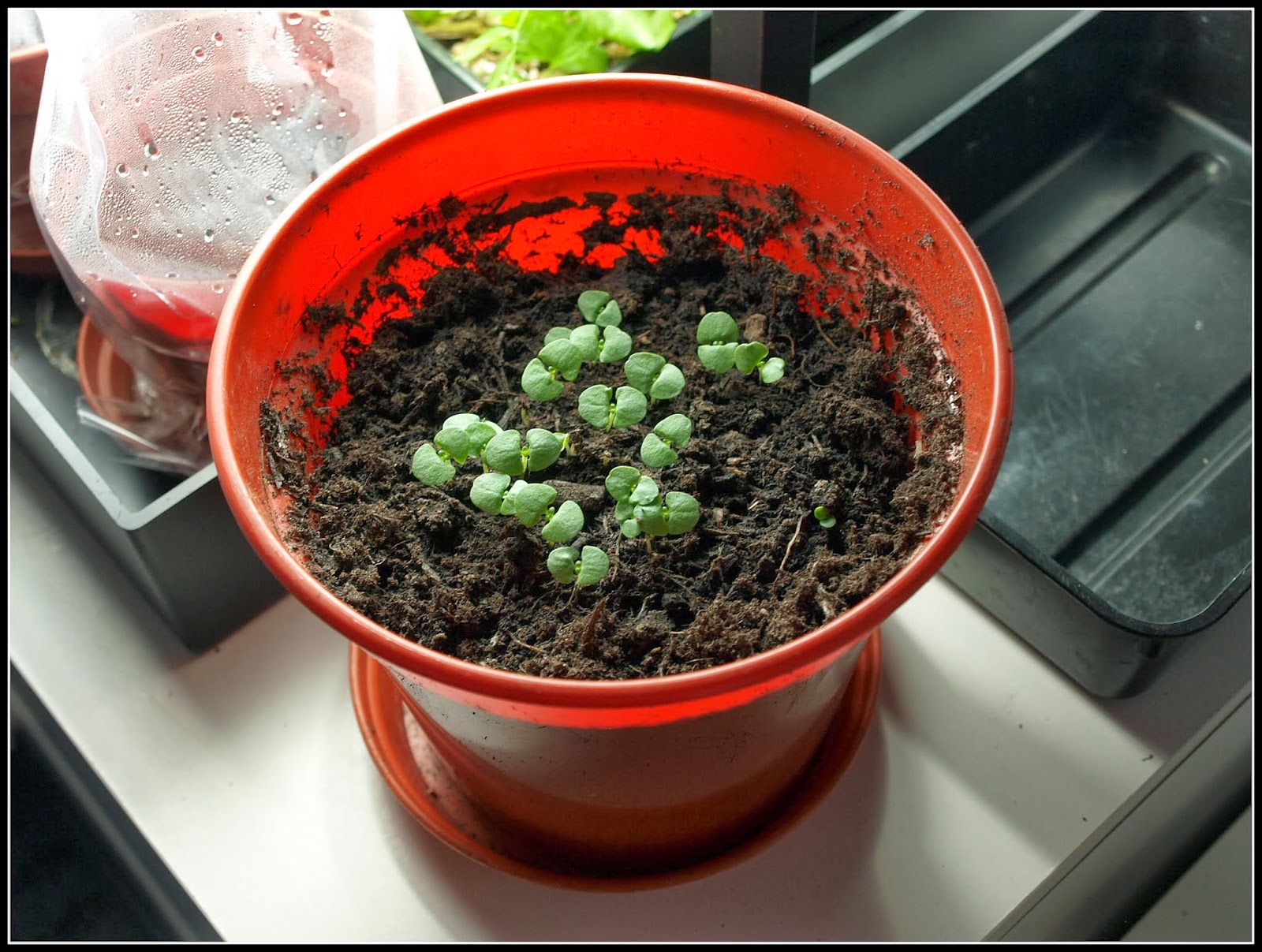 As you can see, I have sown lots of seeds in each pot - far too many for the main purpose, which is to have a couple of plants on the Dining-Room windowsill, as I always do. However, there are two reasons for the multiplicity of seeds: first, I wasn't sure whether any of them would germinate, because they came from a pack of seeds that say "packed in year ending Nov 2009"﻿, so I was aiming-off for a high failure rate (needlessly as it happens); and second, I plan to use the majority of them as microgreens. 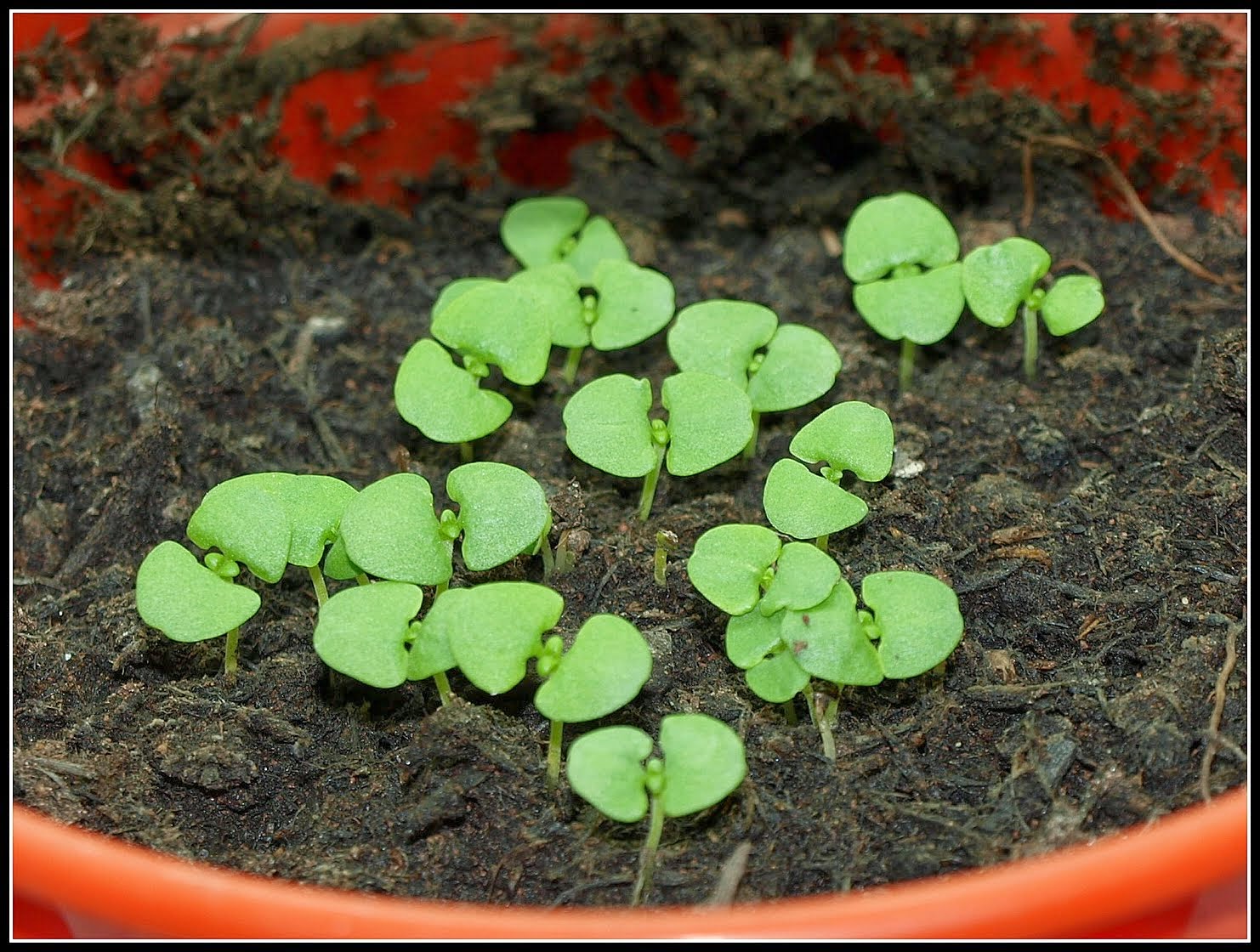 So I shall leave them all for a couple of weeks (until they are microgreen-sized in fact) before thinning them out.

I just thought I would mention that I have only recently thrown away two Basil plants that were from January 2012. At present I have two mature plants that are from seeds sown this time last year. I have cropped them time and time again, and made loads of pesto, of which we have a considerable quantity in the freezer.

As well as the Basil I have two pots of Parsley (fresher seeds!). These have not germinated yet, but I'm not worried since I know that Parsley often takes ages to come up. Hopefully the gentle warmth of the GH will help. I also have two pots of chillis. 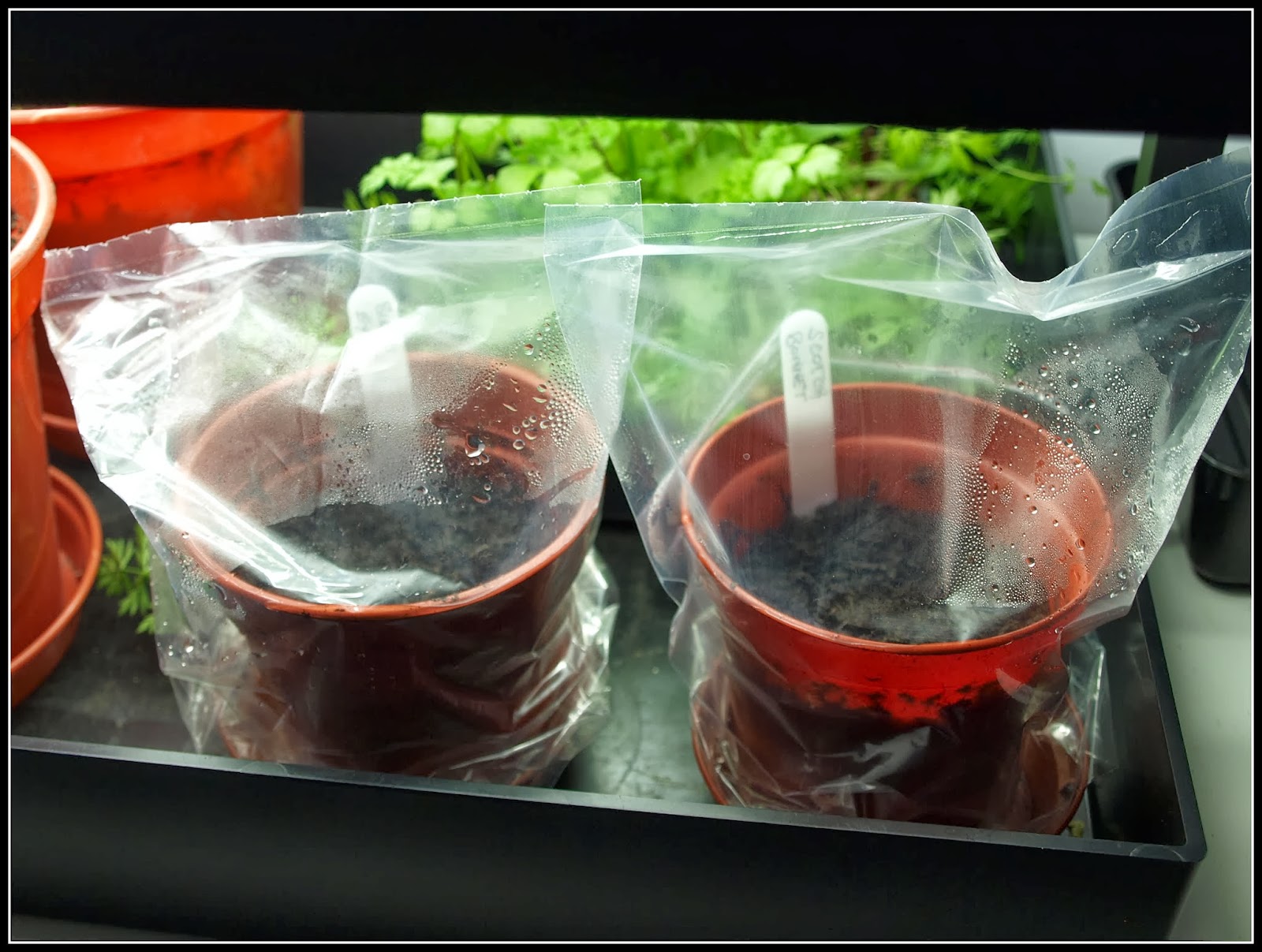 The chillis are a bit of an experiment too. More of a seed-viability test than anything else. I have a bag of seeds saved from a Scotch Bonnet plant I grew several years ago, and I am seeing if they are still OK. I have put 6 seeds in one 5-inch pot, and covered  it with a plastic bag to increase the humidity. No sign of germination yet, but it's early days still because they have only been in there for six days. 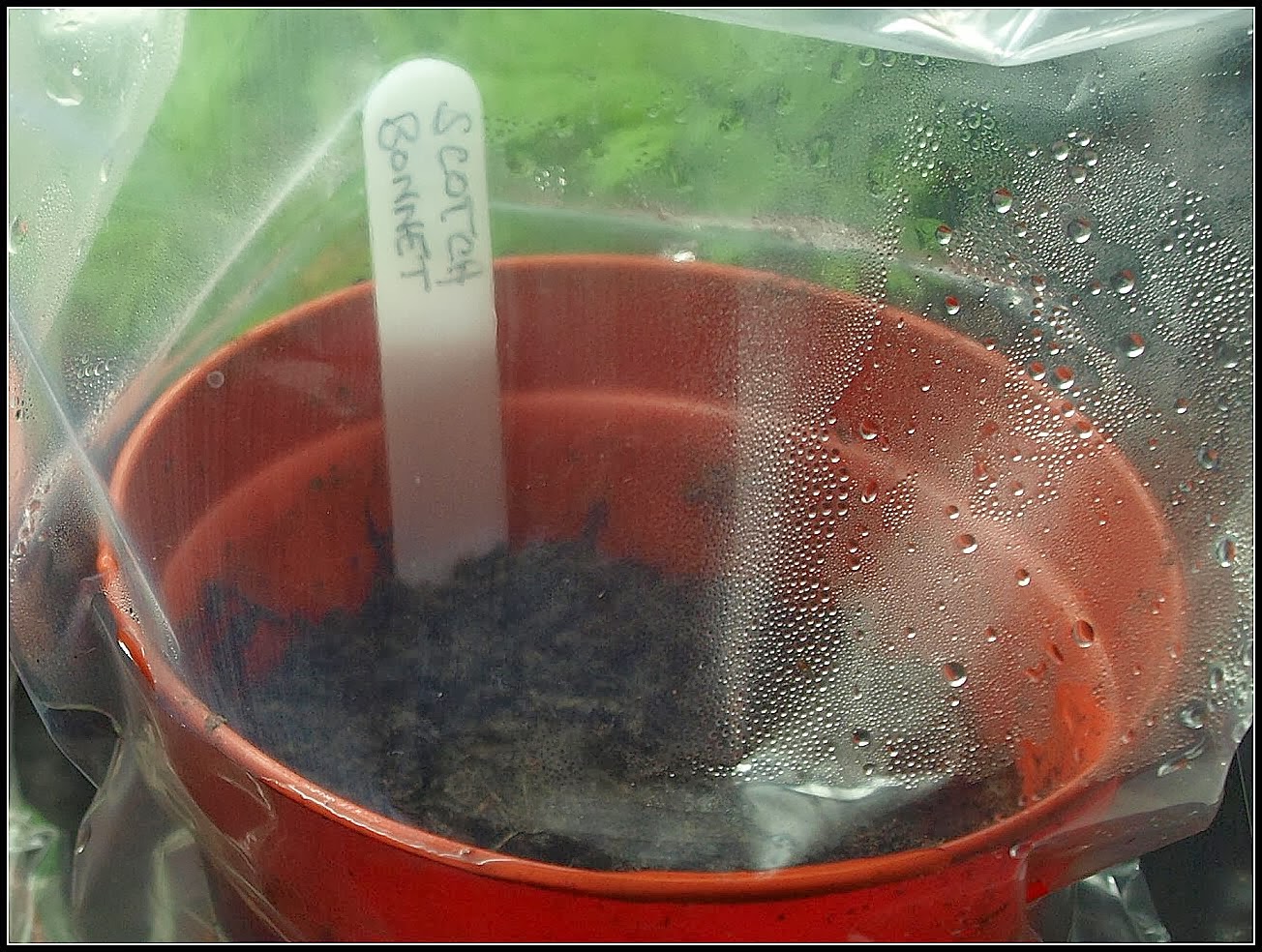 ﻿
The other pot of chillis contains 6 seeds from a very different origin. A couple of months ago Jane won some chilli-themed products (condiments, sauces, etc) in a competition, and when they arrived  four small very dry chillis fell out of the packing material. We think they had just got in there by mistake during the packing process. Anyway, you know what I'm like: I pounced on them and claimed them for myself! Now I am sowing a few of the seeds to see if they are viable. The chillis look as if they might be a "Birds Eye" type. They are certainly very small, (about an inch long) as "Bird's Eye" ones generally are. 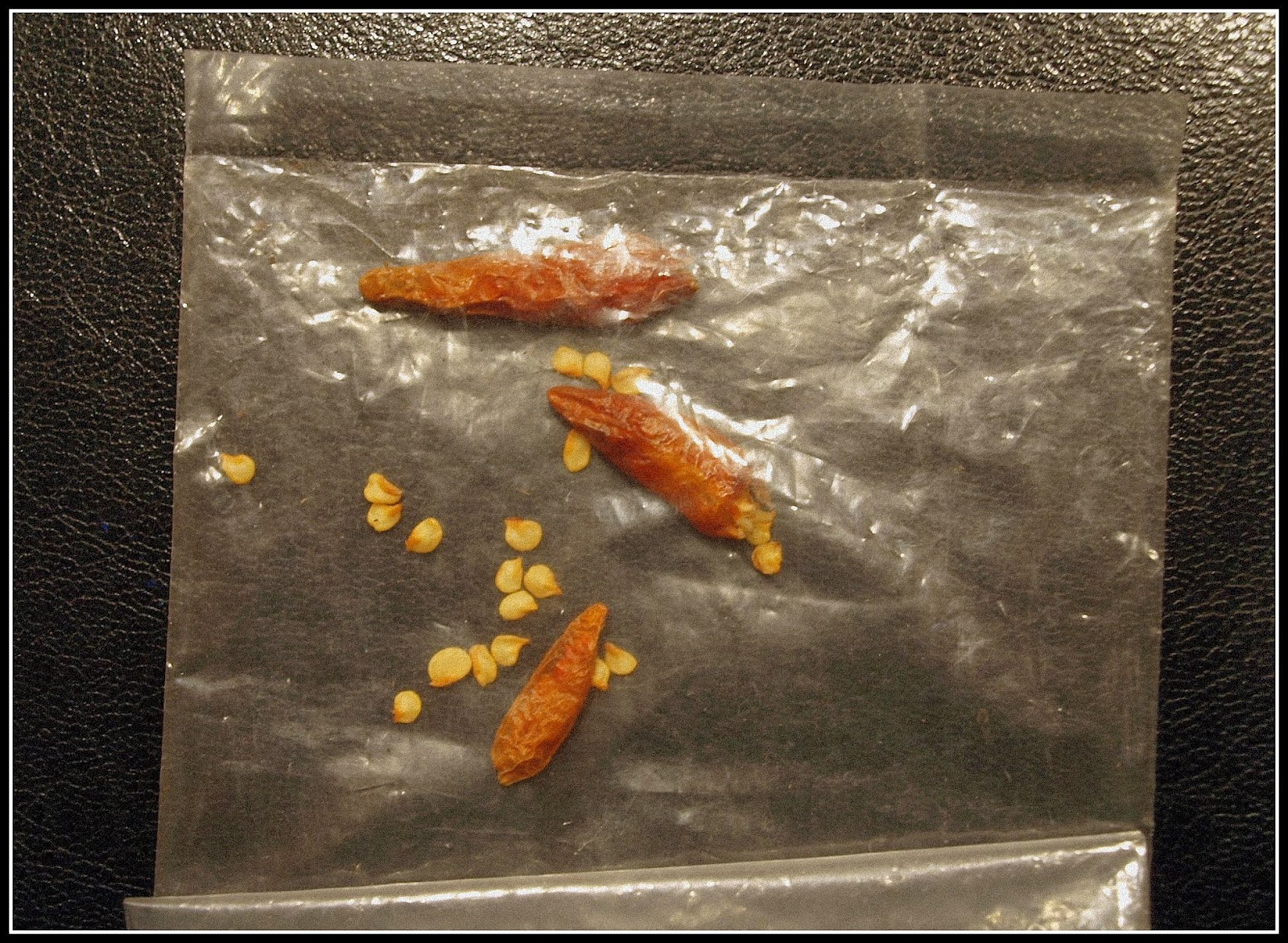 The pod I opened had about 25 seeds in it, so if the others are similar I have enough for a sizeable plantation! Do you know, I think it is actually nicer to grow something like this than something from a mass-produced commercial seed packet.
Posted by Mark Willis at 12:00