Today's dish "Pintadeau au vin rouge" (guinea-fowl in red wine) is based on a recipe in a book called "Recipes from a French Herb Garden" by Geraldene Holt. This is a book which really inspires me. The recipes in it all use herbs in some form or other, either fresh or dried. As regular visitors to my blog will know, I am very keen on growing herbs, and we use a lot of them in our cooking, so you will know how much this book appeals to me. This particular dish uses Thyme, Bay and Winter Savory (Sarriette) - all from my own garden. 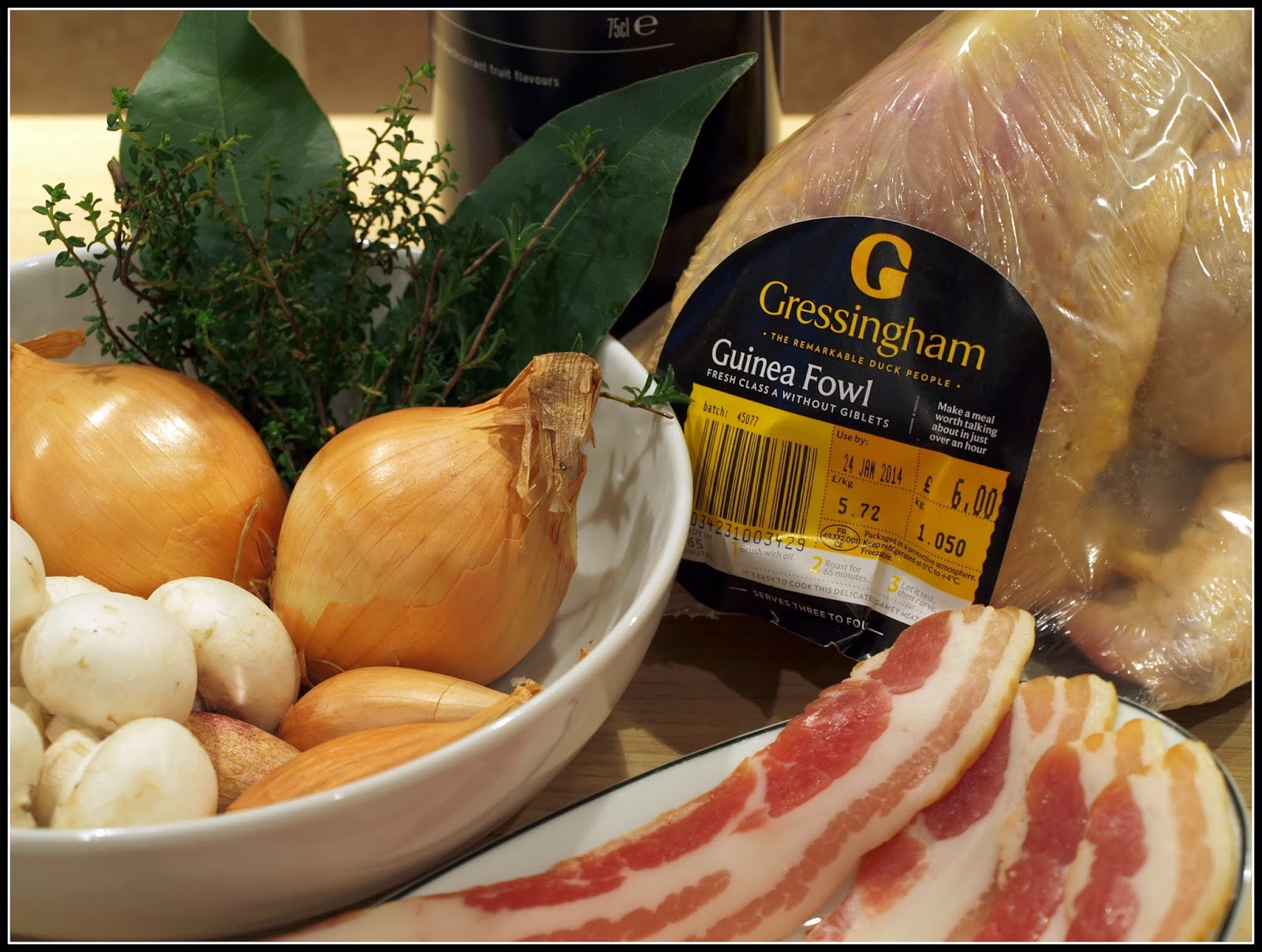 For those of you not familiar with the Guinea-Fowl as a culinary ingredient, let me explain that it is like a small and ever-so-slightly-gamey chicken. The meat is a little denser than chicken, and slightly yellow in colour. Certainly you could use chicken if you can't find, or don't like, guinea-fowl. ﻿ 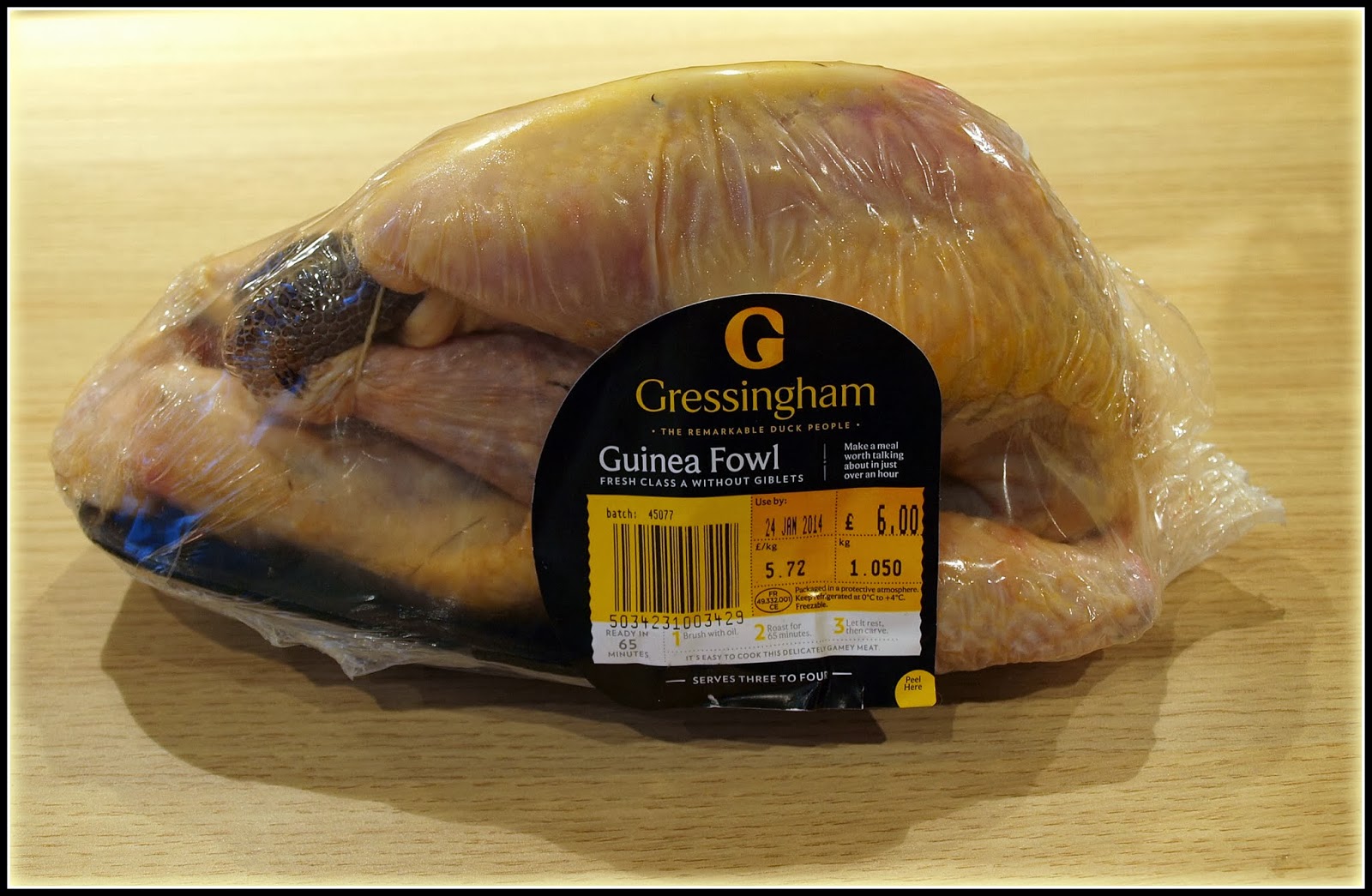 For copyright reasons I'm not going to give you the exact quantities of anything or the exact recipe, but I'm sure my post will give you enough to go on if you wish to re-create the dish yourself.

The first step is to divide the bird into four joints - two breasts and two legs. If this were a chicken, I would keep the backbone and other bits to make gravy with, but I personally think that guinea-fowl gravy is not very nice, so I discarded them. 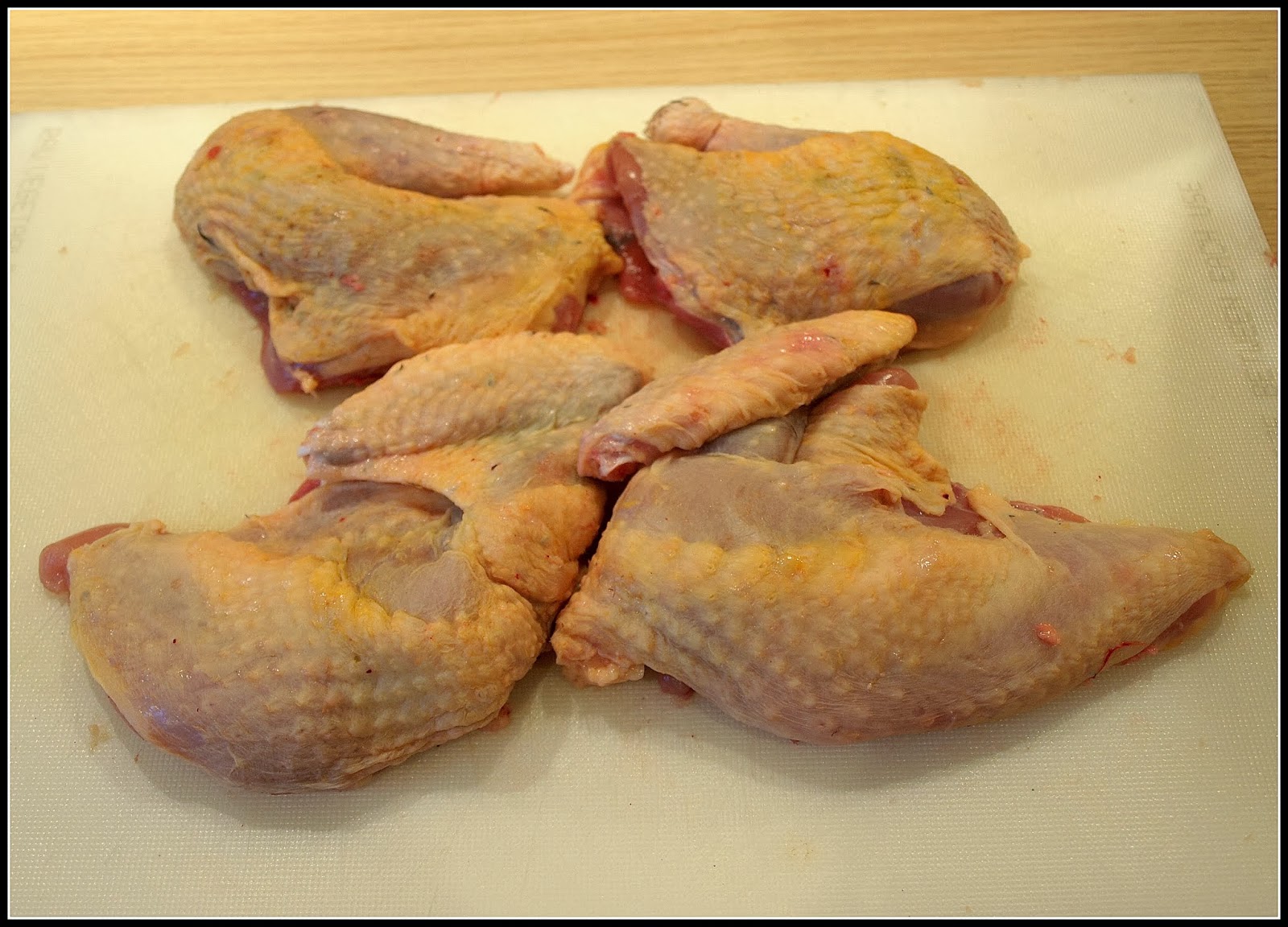 The recipe proceeds along fairly conventional lines: brown the meat; cook some smoked streaky bacon; soften some onions and garlic in the bacon fat; (I threw in the last of my home-grown Shallots); 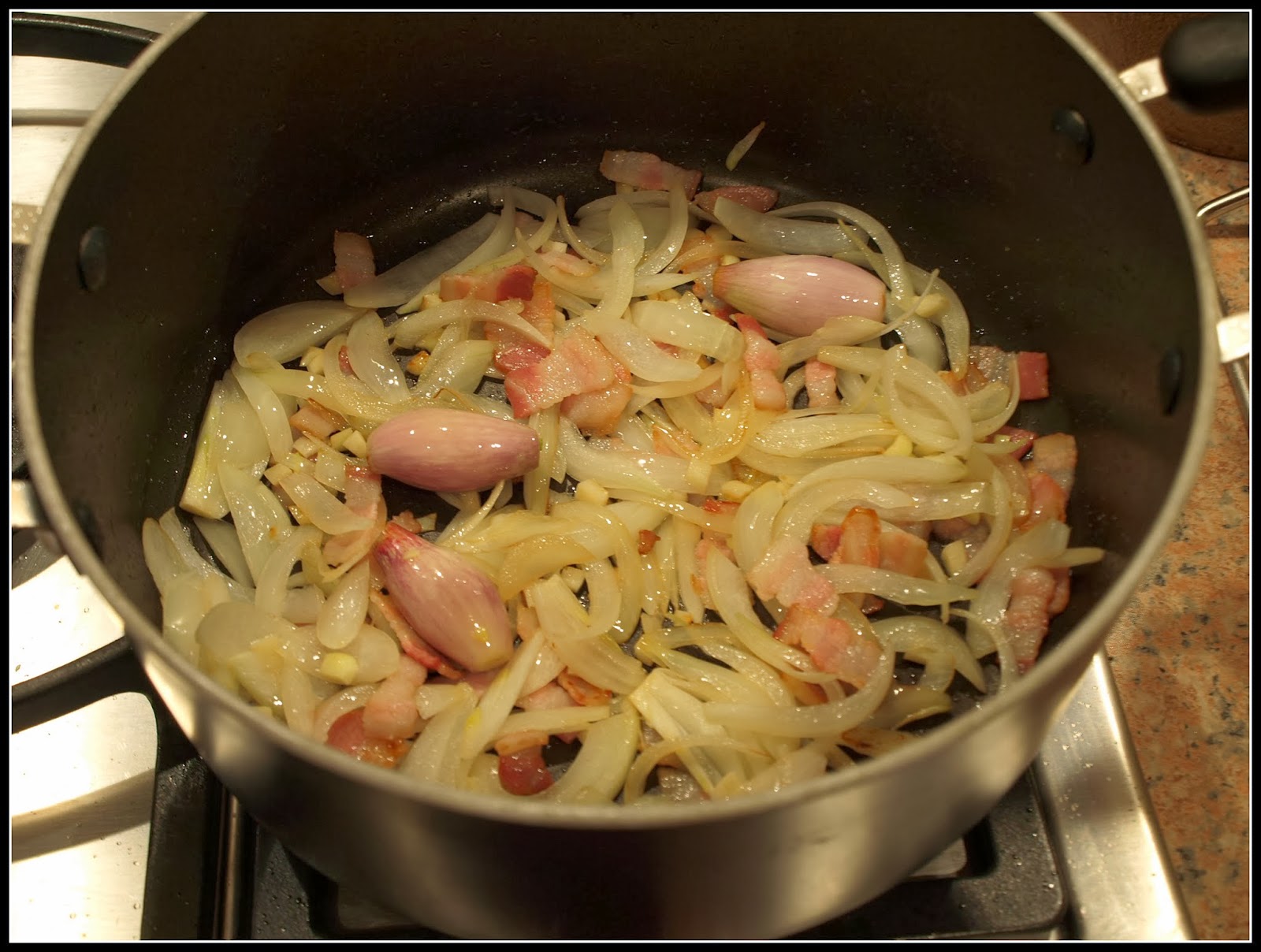 stir in a little flour with some wine to moisten it; chuck the herbs in; put the meat on top; 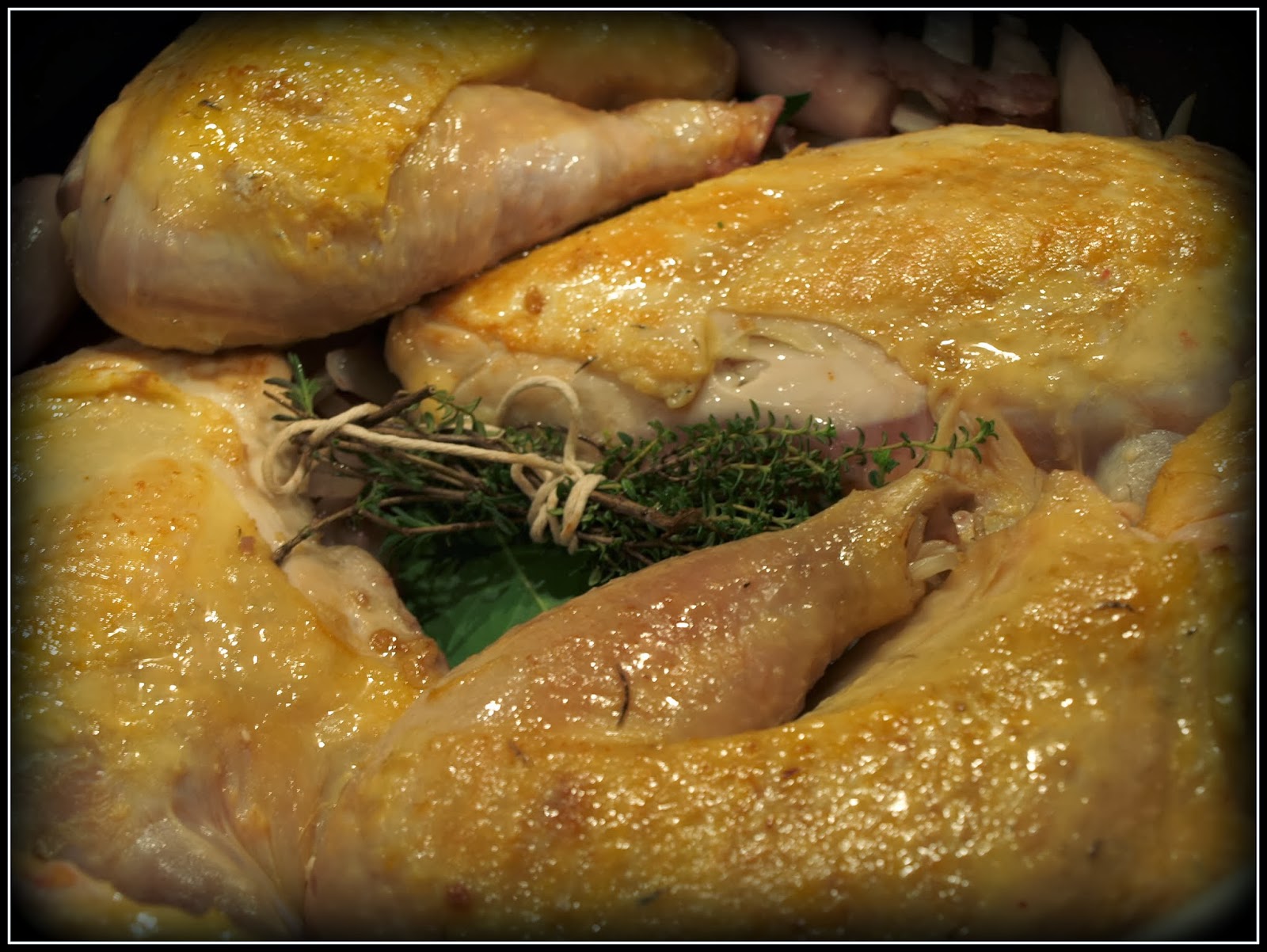 cover it with the wine (the recipe uses a whole bottle, so think carefully before you put your best Chateau Lafitte into it!)﻿; 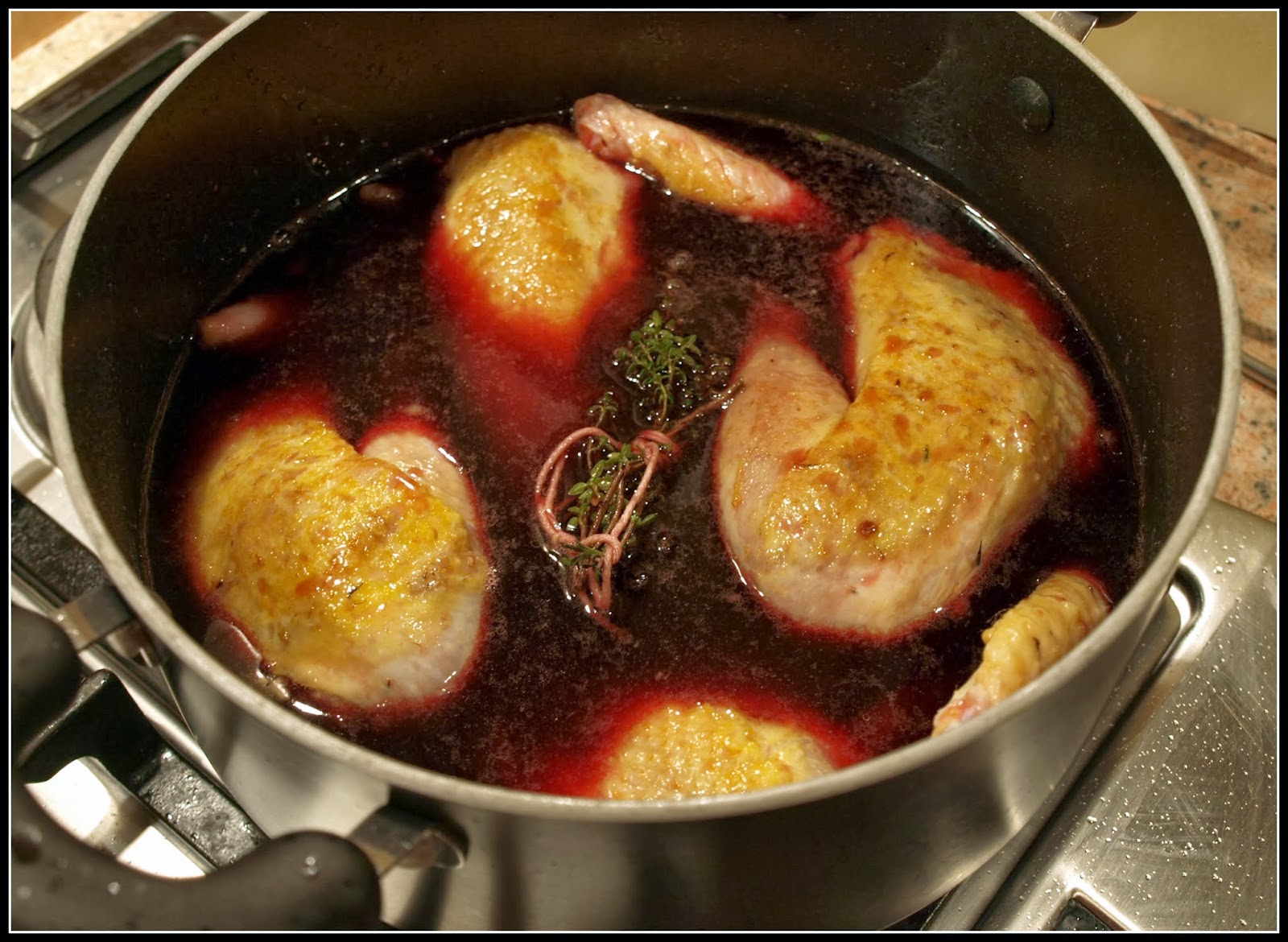 cover and cook over a medium heat (160C) for about half an hour; add some button mushrooms and baste them with the hot wine; return the dish to the oven and cook for a further 30 minutes or until the Guinea-Fowl is fully cooked. I added a little slaked cornflour to thicken the sauce, but you could also pour it off into a saucepan and reduce it before adding it back onto the Guinea-Fowl. 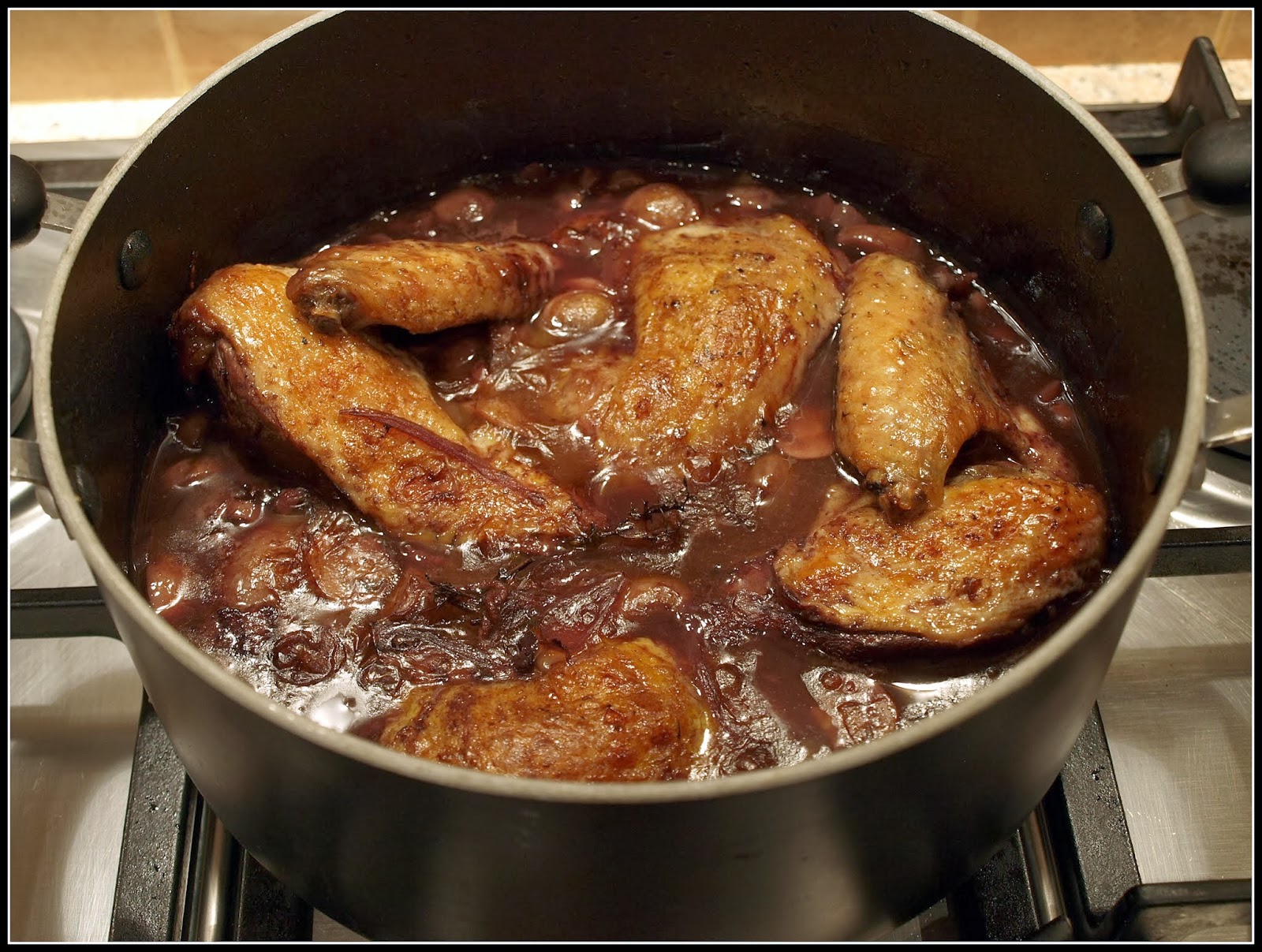 I served our Pintadeau with a classic Gratin Dauphinois, 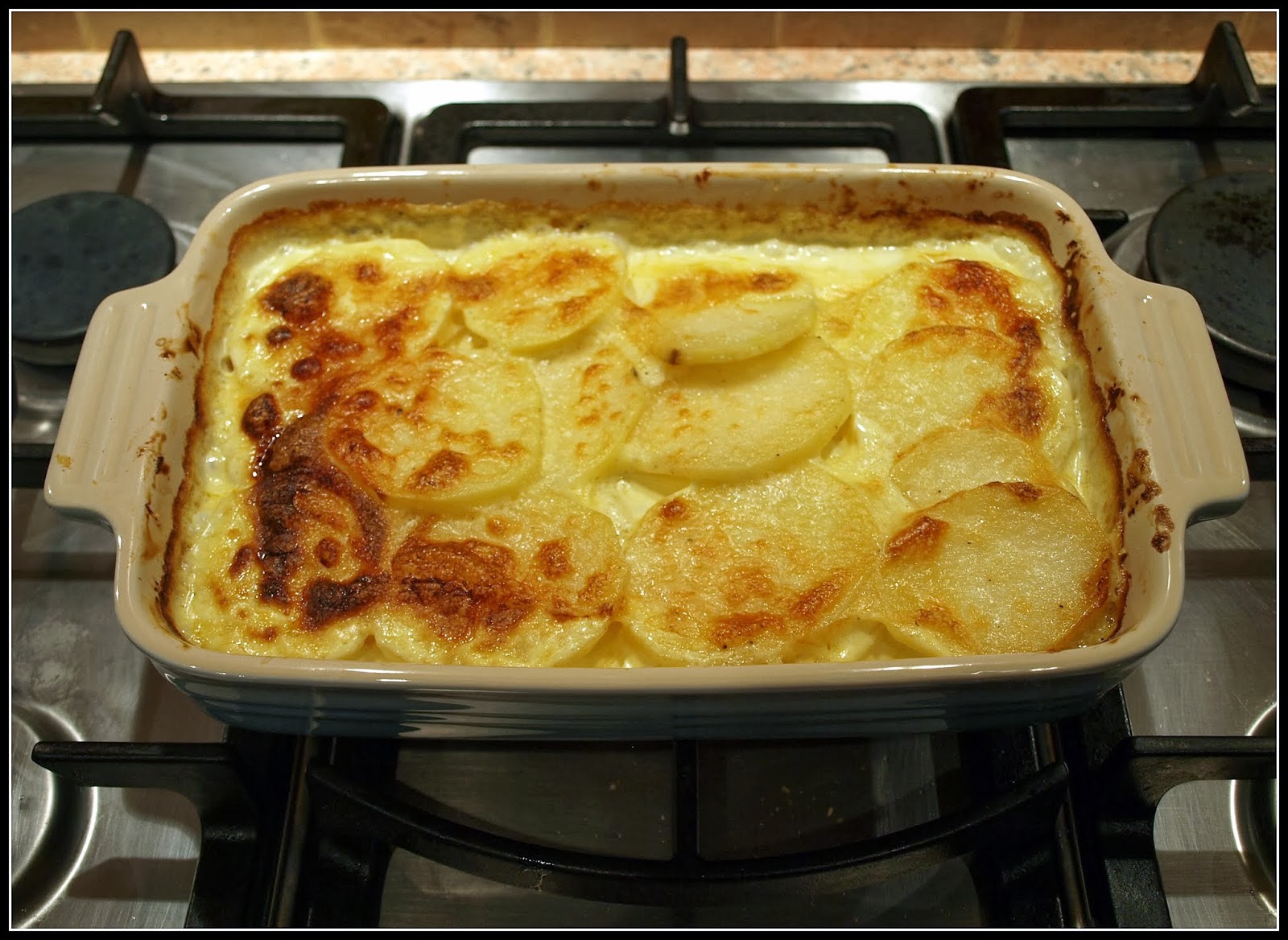 and a side salad of home-grown Mesclun and Radicchio - oh, and of course a bottle of French red wine, in this case a St.Chinian (Chateau de la Dournie, 2009)! Anyone would think we liked French cuisine, wouldn't they? 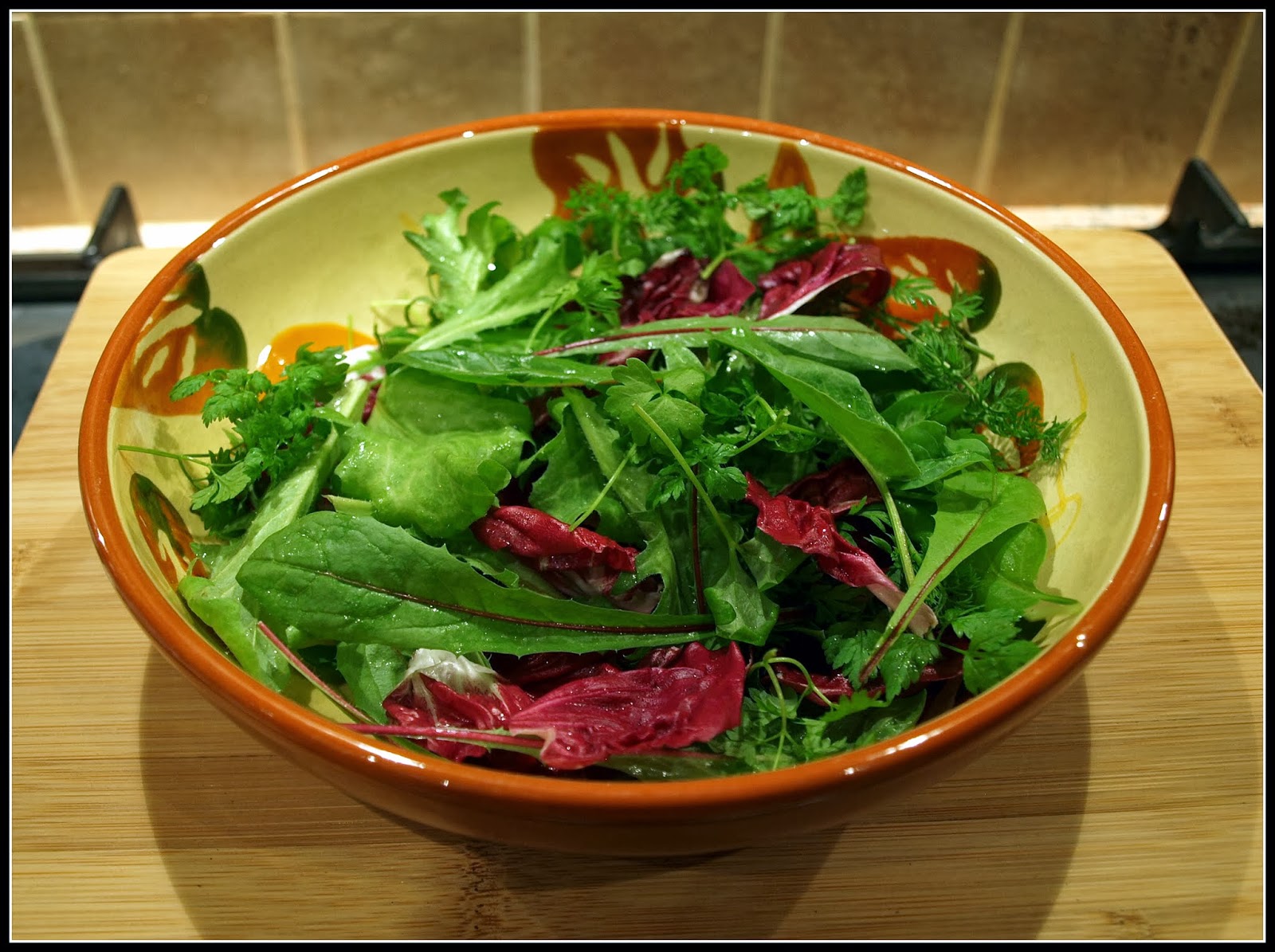 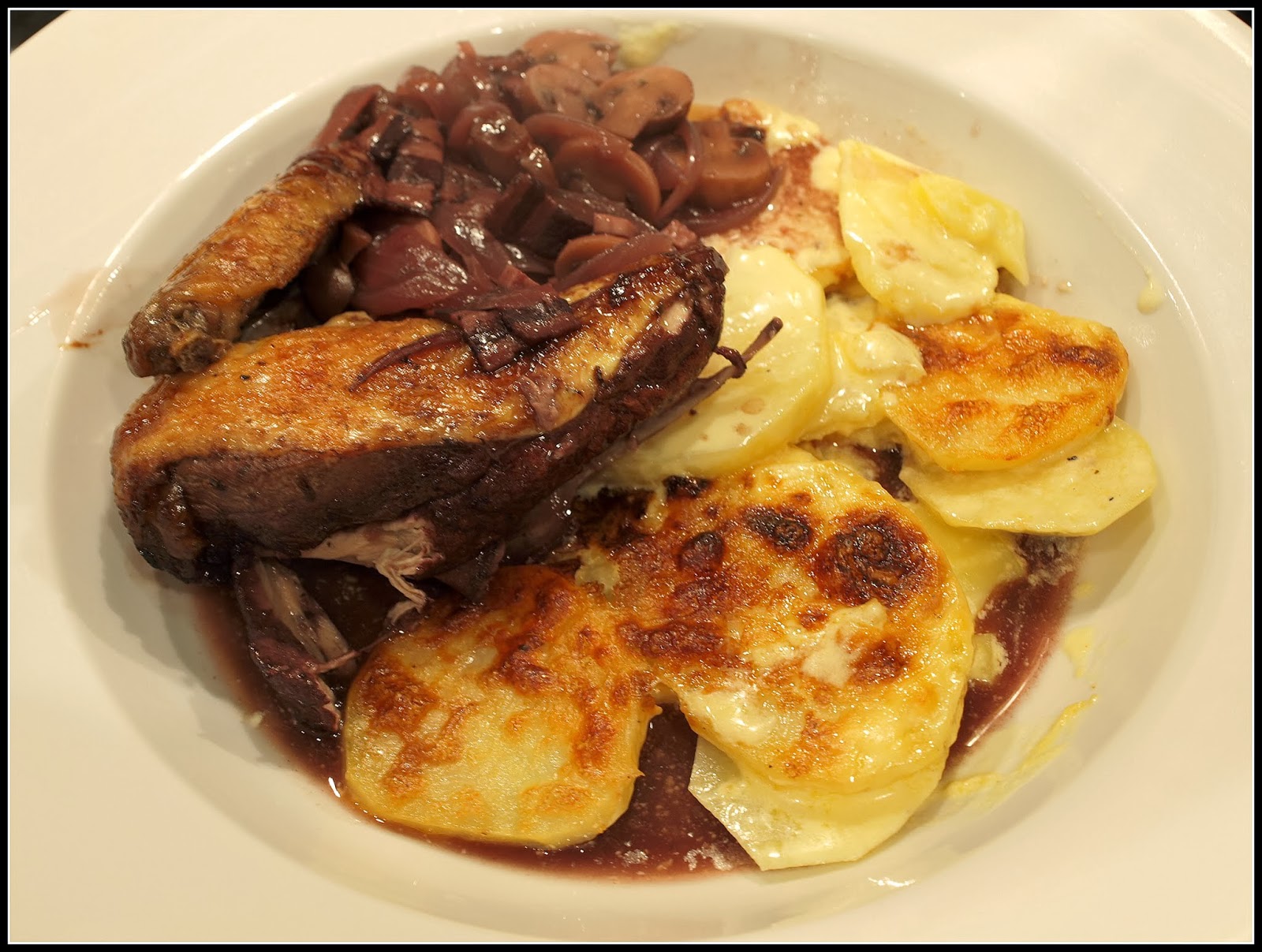 The dish was everything I wanted it to be: succulent; tasty; winey; yet not brash; very French. And do you know what was the star of the show? Surprisingly it was the small amount of Celery leaf in the Mesclun - amazingly tasty. So tasty in fact that I have resolved to buy a packet of Celery (or was it Celeriac?) seed, just to grow it for Micro-greens. ﻿

I haven't shown it here, but I just want to say that we followed the Guinea-Fowl dish with some French cheese- some Beaufort, which Jane brought back from France a couple of weeks ago. It was the epitome of  what cheese should be: tangy, powerful (unpasteurised), full of depth; worlds apart from the "plastic" Cheddar that sells in such huge quantities in our supermarkets.
﻿
Final thought: one Guinea-Fowl will easily serve four people, not two! Now, what do we do with the leftovers?
Posted by Mark Willis at 12:00