You can hardly have failed to notice that I have recently been very impressed with the cookery style of Yotam Ottolenghi! Loved his TV series; loved his new book "Jerusalem". So many of his recipes appeal to my taste, and I really admire his down-to-earth, sometimes even rustic, presentation of food. He is not a vegetarian, but he handles vegetable cookery so well, and knows exactly how vegetables and meat go together best. 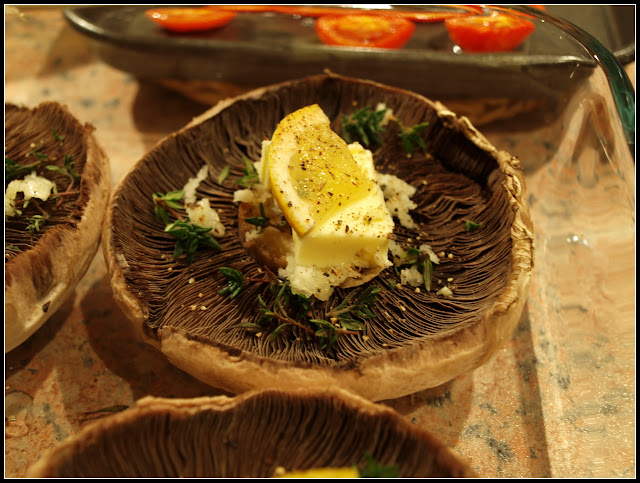 Yesterday I wrote about a Lentil and Red Onion salad that was directly influenced by an Ottolenghi recipe, and today I am going to write about the rest of the meal of which this was a part. The meal was definitely "in the style of" Ottolenghi, but not following any specific recipes. It just happens to be a meat-free meal, but it could easily have been otherwise. Here is picture of the "organised chaos" in the kitchen as I was putting the meal together - otherwise known as "mise en place"... 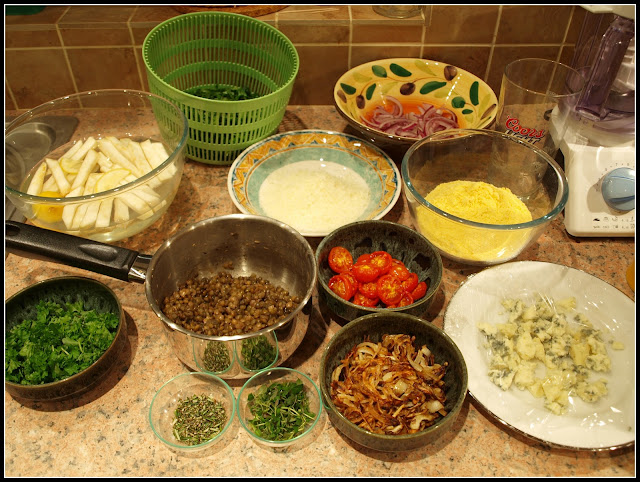 This was my menu:

First (as a starter) the Lentil and Red Onion salad, which I have already described. 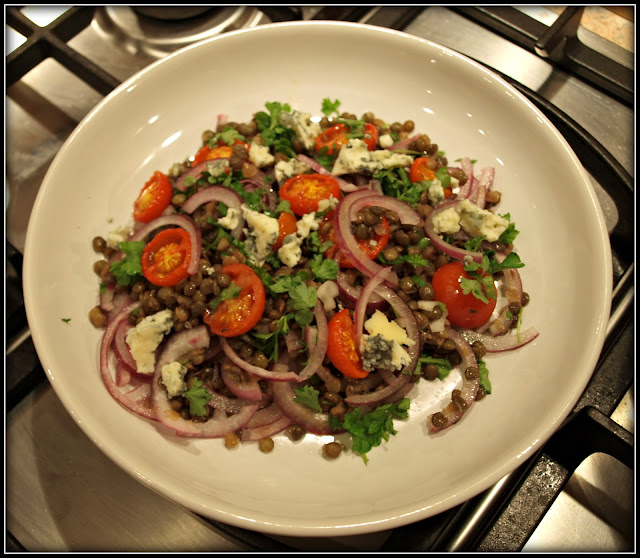 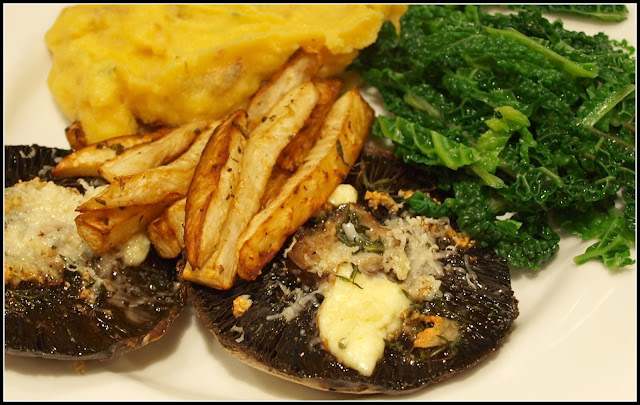 Here are the mushrooms, ready for baking, sprinkled with crushed garlic and black pepper and topped with a knob of butter, a small piece of the Blue Cheese, and a little slice of lemon. These were huge mushrooms and they had quite thick skins, which would probably have been unpalatable, so I peeled them. 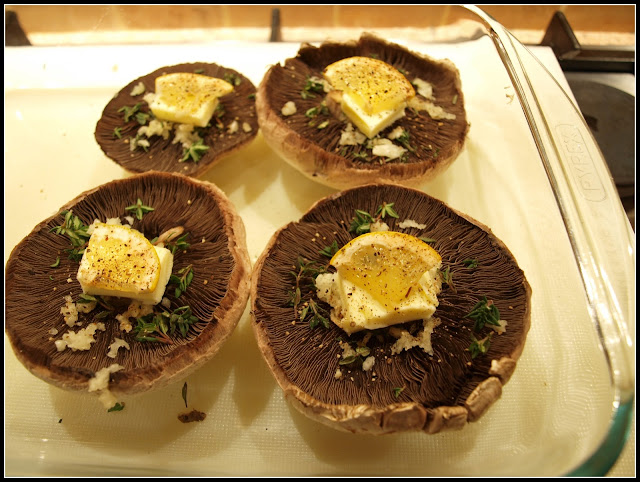 Here's a view of the semi-dried tomatoes that went into the Red Onion and Lentil salad, along with the Celeriac chips in their raw state. 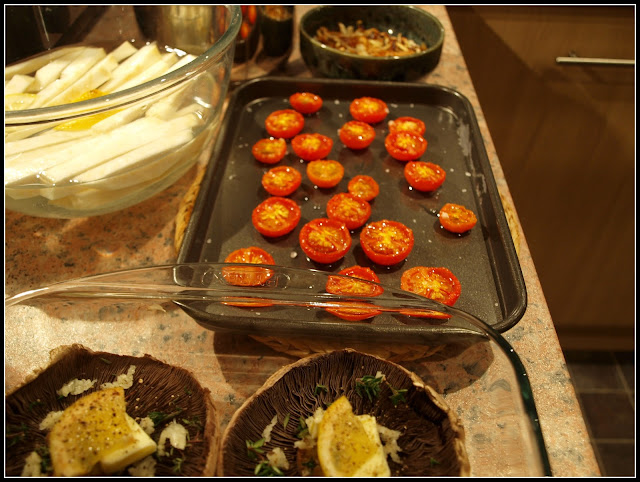 Here are those Celeriac chips again. Celeriac does tend to go brown when exposed to air, so to prevent this I put my chips in water acidulated with a couple of slices of lemon. 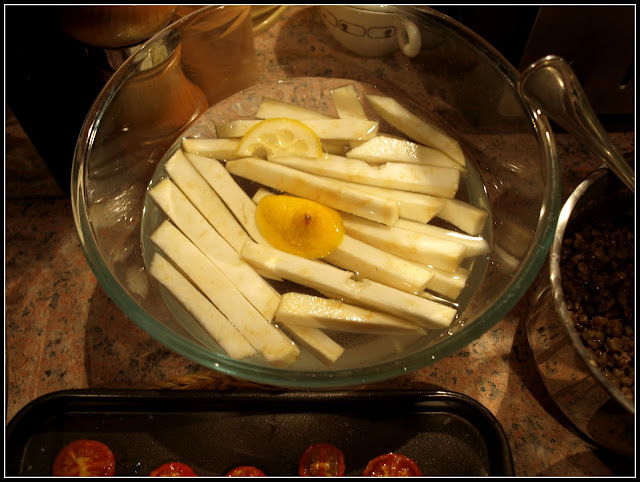 Here is the whole thing plated-up. Soft polenta at the back, with slow-fried crispy onions and parmesan cheese stirred into it. At the right the Savoy cabbage, boiled plainly in salted water for just a few minutes. This was perhaps the least exciting element of the meal but that doesn't mean it was not nice. To be honest though I included it mainly to give us some variety of colour and texture. 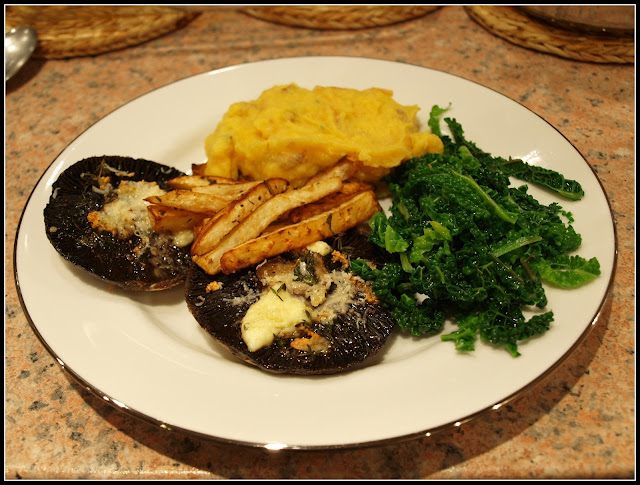 The Celeriac chips were fried in butter and vegetable oil, into which I had put about a dessertspoonful of finely chopped fresh Rosemary. These chips don't go crispy like potato chips, but My Goodness, they are tasty! Much more so than potato chips.

I made too much polenta (as usual). It is actually quite difficult to make polenta in small quantities! Never mind, you can tip out any that is left over onto a piece of clingfilm or greaseproof paper, chill it and use it later. Fried polenta chips are nice... 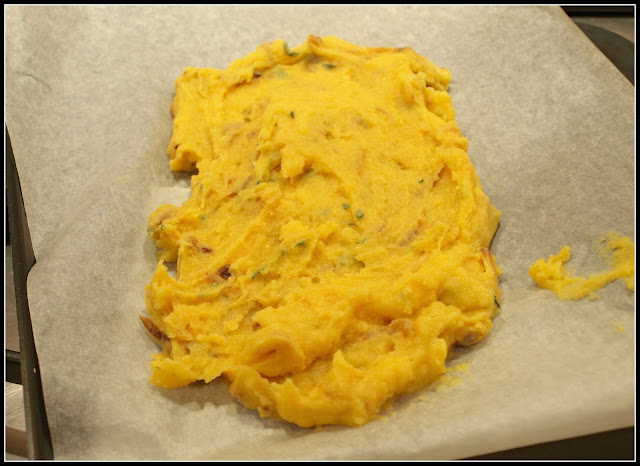 ﻿
As I said, this meal did not include any meat, but having said that I see no reason why you could not add some if you wanted to. A grilled Pork Chop or a couple of Lamb Cutlets would have been nice with this - as indeed would have been a few Lamb Koftas or some brochettes (aka kebabs), or even a grilled chicken breast.
Posted by Mark Willis at 16:00