The other day I wrote about one of the books I received as a Christmas present - "Jerusalem", by Yotam Ottolenghi and Sami Tamimi. The book is full of dozens of things I would like to cook, but as Jane often says to me "we only eat 3 meals a day"! My post today describes a dish called Open Kibbeh, adjusted slightly due to the absence of one or two ingredients that are mentioned in the recipe. For instance I didn't have any sumac, so I used a Za'atar mix, which includes sumac. I am confident that it was quite similar to the authors' original concept!


Making Open Kibbeh is like making a kibbeh quiche. Normal kibbeh are a sort of stuffed meatball, but this dish is made in a cake-tin with a removeable bottom and served like a quiche or a cheesecake. It has a base of bulgur (aka, bulgar, bulghur or cracked wheat), on which is heaped a spicy mixture comprised mainly of minced lamb with pine nuts. It is topped with a tahini (sesame paste) sauce. This is how the book describes it:- 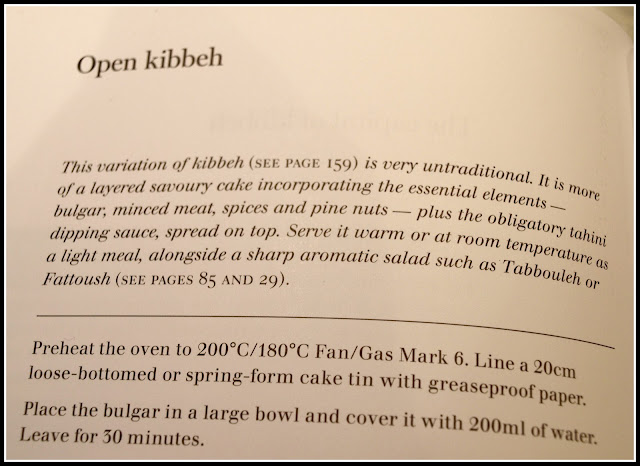 ﻿
Here are some of my ingredients: bulgur wheat, pine nuts, Zatar (or Za'atar), ground Allspice and green Cardamon pods. The latter are very strongly flavoured, so I only used a couple. Ottolenghi's recipe does not call for it, but I'm "on" Cardamom at present, and I needed a flavour to replace the Coriander. 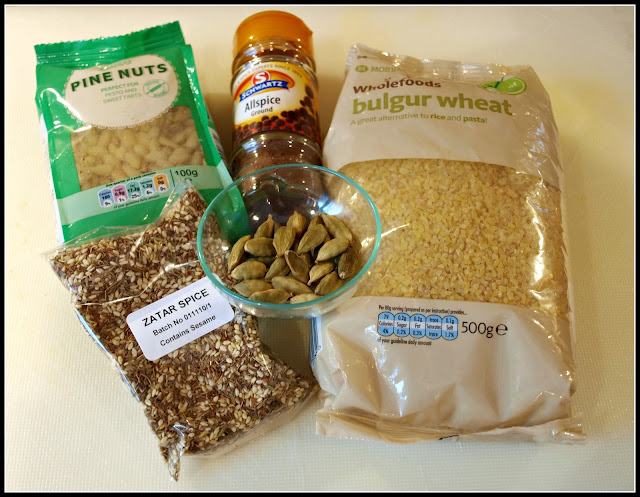 I'm not going to describe the recipe in great detail, because I don't think that would be ethical. If you want to know the details, buy the book!

But in outline: The first step is to cook minced lamb with onions, garlic, pine nuts, chopped parsley and loads of spices. The smell at this point is unbelievably good! 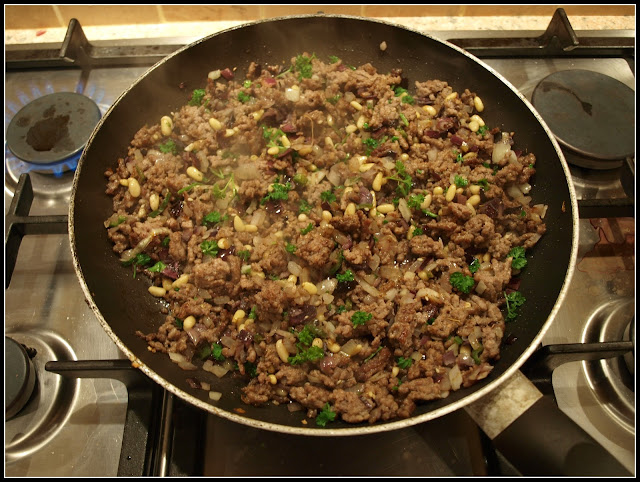 You make the base with bulgur wheat, self-raising flour and water, combining it into a sort of dough, which you then pack into the cake-tin. 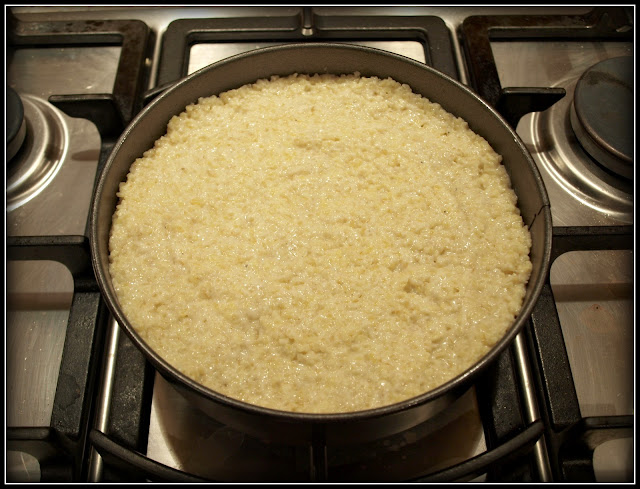 The spicy lamb is then placed on top of the bulgur, and pressed down firmly, prior to baking at 200C for 20 minutes. 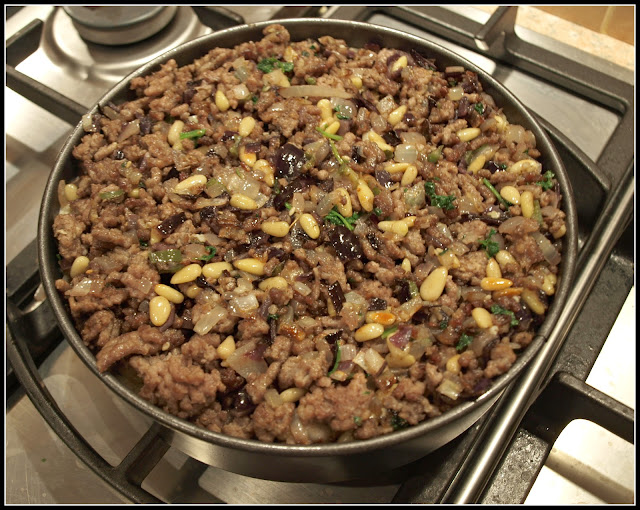 When the dish comes out of the oven you cover it with a Tahini sauce made with tahini, lemon juice and water, sprinkle it with more parsley and pine nuts and put it back into the oven for another 10 minutes. 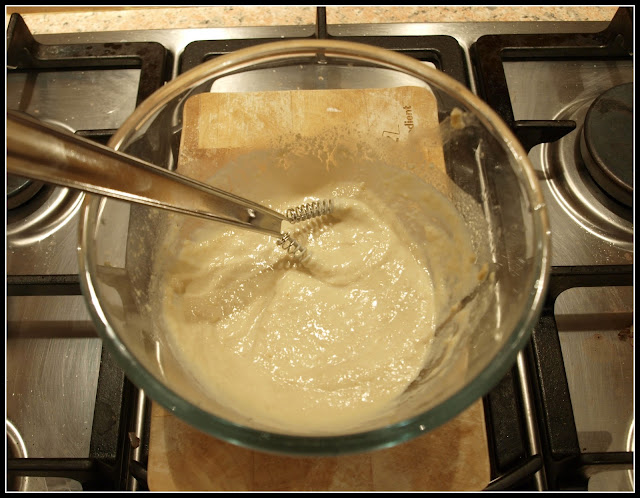 The dish is finished when the Tahini sauce is semi-solidified and the pine nuts are golden brown. 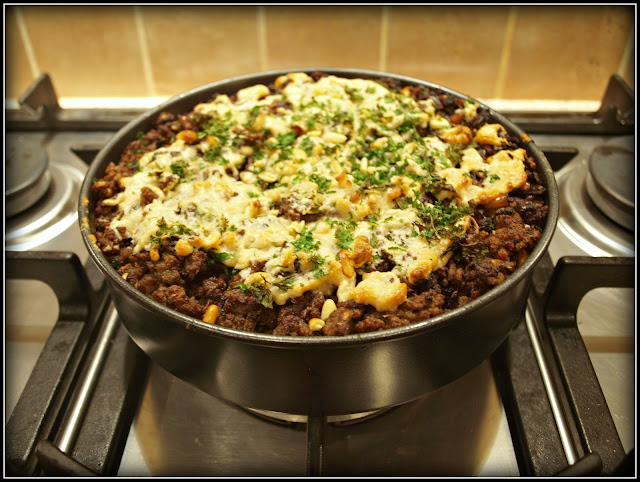 The recipe recommends serving the dish warm or tepid, so you can afford to leave it to cool a bit - during which time it firms-up, allowing you to remove it from the cake-tin in one piece. 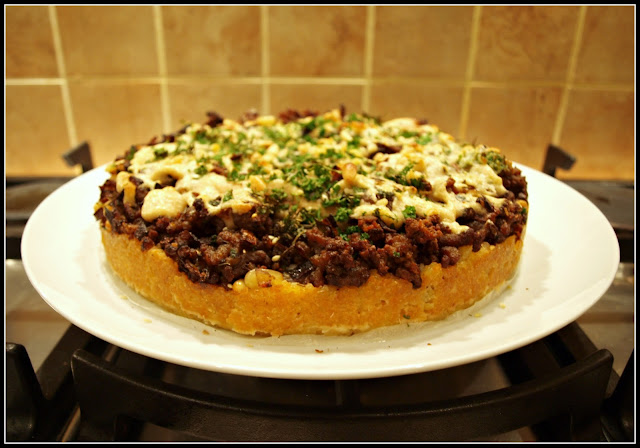 There, I told you so: it looks like a savoury cheesecake!

I served ours with a selection of salads: grated carrot with raisins; beetroot with shallot, and mixed lettuce and radicchio. 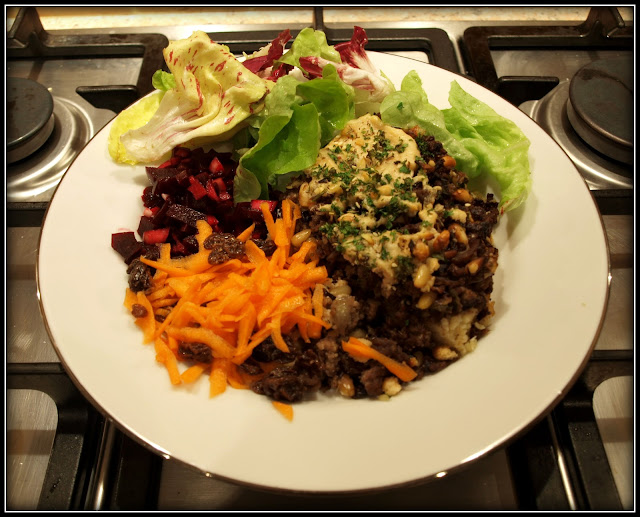 We loved this dish - especially the spicing in the lamb - but I think if I do it again I may try serving it hot, or at least warmer. I would also put the second batch of parsley on the dish AFTER the second cooking, not BEFORE, as the recipe states, because it did go a bit crispy and brown.
Posted by Mark Willis at 16:00