Well, a Happy New Year to all my readers!  Thank you for your continued support. Let's hope that 2013 will be a better year for gardening than its predecessor...

I mentioned the other day in my Plans for 2013 post my intention to make a very small water-feature in my garden, not as an ornament, but as something to provide drinking-water for animals, birds and insects. I have looked round for inspiration and found that plenty of other people have done something similar - for instance Mike Rogers, aka Flighty from Flighty's Plot, who showed me a couple of good examples, like this one, and Hazel Dene over there in Australia, from whom I have borrowed the term "micro-pond" (whether she invented it or not...). I also had a close look at what Sue from Our Plot at Green Lane Allotments wrote about her "Puddle-Pond", and many others. Well, the time has now come for me to join in and make my own one.

As I'm sure you are aware, space in my garden is strictly limited, so my water-feature is going to be of very modest proportions. I am basing it on this: 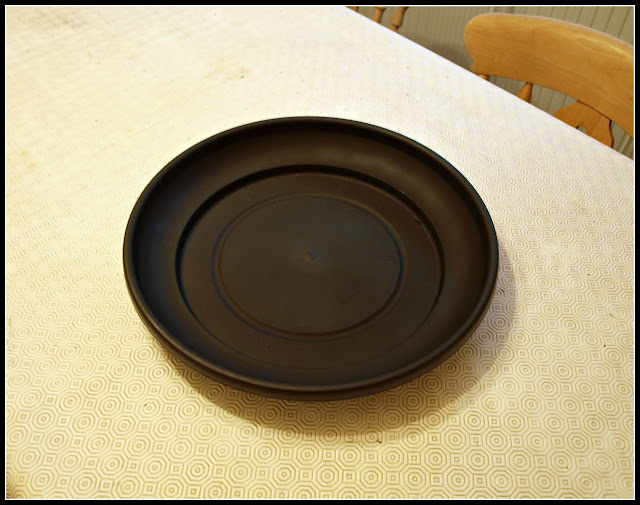 It is a 17" / 43cm plastic pot-saucer, which I bought from our local "Poundstretcher"-type shop for £2.45. I had originally intended to use a recyled washing-up bowl, but the only one I have that does not have drainage holes drilled in it is bright yellow and I didn't think that would look very nice in the garden!

This saucer is very shallow - about 3 inches or so. I don't want to have something deep, into which animals could fall and possibly drown; I just want something from which they can drink. 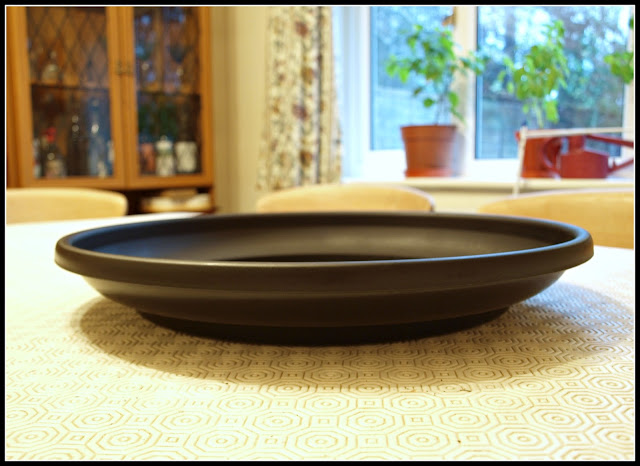 The first part of the task was to choose the exact location. I decided to put it right next to the shed, in an area of dry shade where it would be secluded and hence hopefully attractive to potentially shy animals. 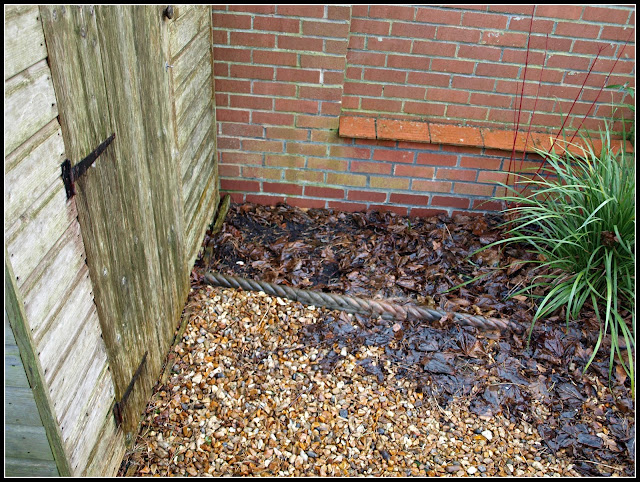 Another consideration was to put it well away from the part of the garden where the cats from next door normally come over or under the fence. Incidentally, these cats love my insect hotel, because it helps them to get over the 6-foot fence that much more easily! At present, our neighbour's cat Archie comes every day to drink from the watering-cans next to my water-butt. I wonder what he will make of the new pond... 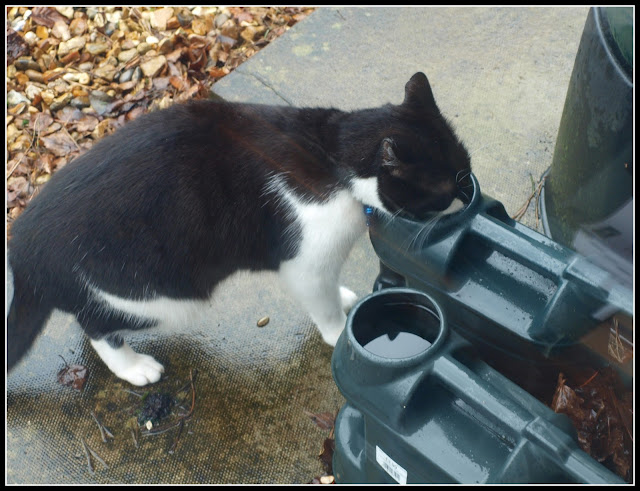 Prepration of the site was a 5-minute job with the spade and trowel. That patch may have looked completely vacant, but actually it was full of Lily Of The Valley rhizomes. I was careful to remove the ones directly under the pond site. 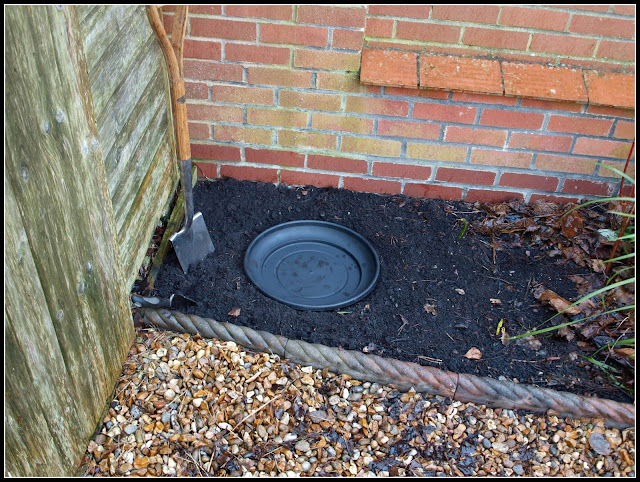 Once the "pond-liner" was in place and fairly level, I arranged a few stones and pebbles around the periphery to make it look a little less harsh. Rounded stones would look better, but I didn't have many. Perhaps I'll get a bag of them next time I visit the Garden Centre. 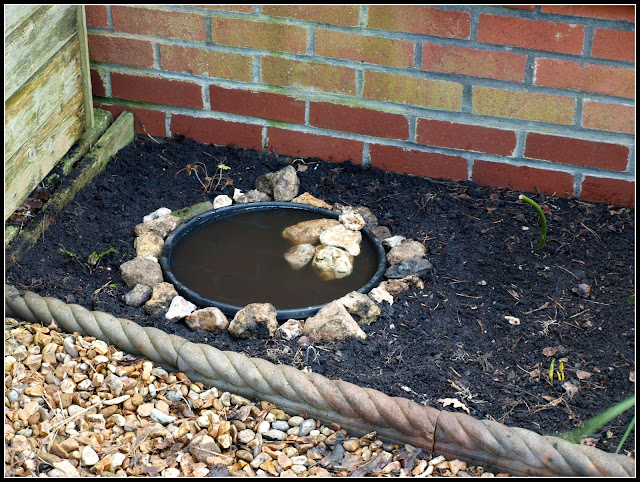 As you can see, I made a sort of island in the pond, which is intended to help with the escape of any little creatures that fall into the pond by mistake. 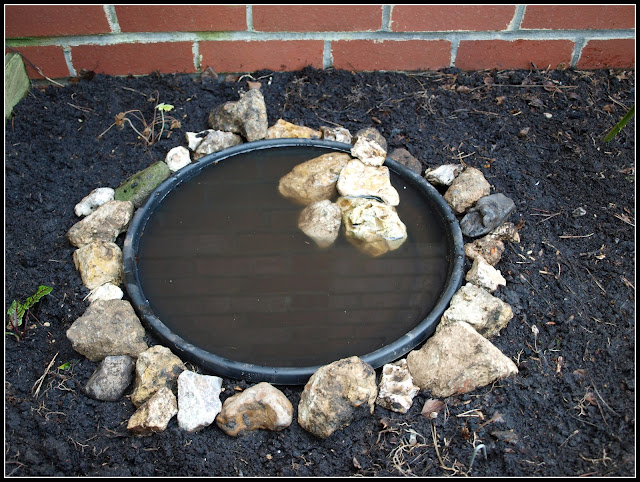 The whole thing looks very harsh and bare at present, but in the Spring I'm sure lots of plants will grow up and help the pond look a little less artificial. To assist this, I have re-located to its periphery a few little volunteer plants which I found elsewhere in the garden, like this Red-veined Sorrel. 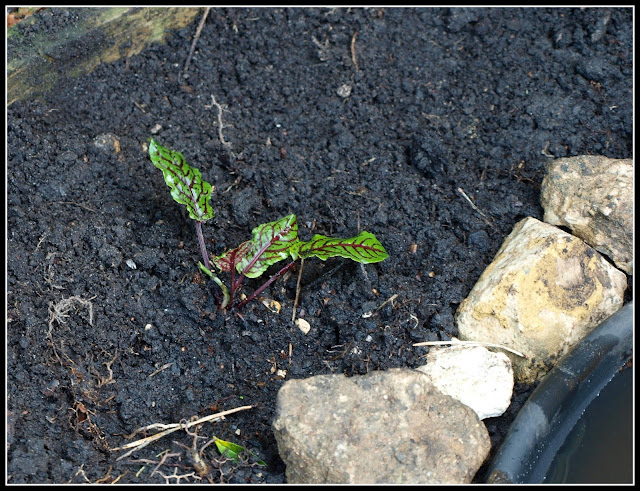