Regular readers will know that I am a big fan of home-made compost. I always have two compost bins on the go - one being gradually filled, and the other "cooking". I also have a third bin for making leaf-mould, but that's another story.

On New Years' Day the sun shone, which is quite unusual in these parts just now, and this inspired me to do one of the jobs I always try to get done some time during the Christmas / New Year holiday period - emptying one of the compost bins. Most of the holiday had been wet and sometimes windy, definitely not conducive to mucking about with compost, so 1st Jan was the final opportunity before returning to work...

This was also a factor: 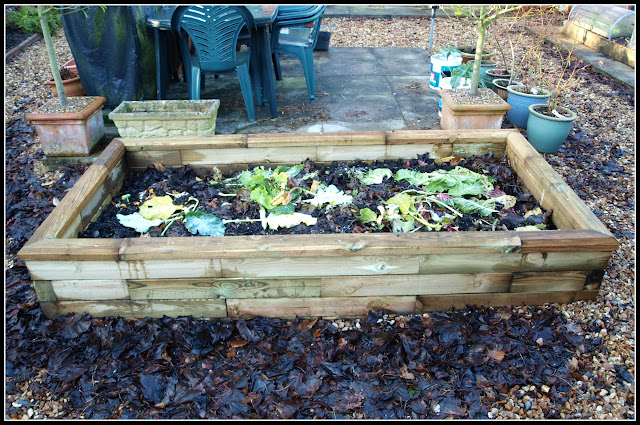 My new Woodblocx raised bed was in serious need of more compost. For the last few weeks I have been slowly filling it with old compost from pots being emptied for Winter, general garden waste, and vegetable scraps from the kitchen. But it was not enough. The decaying material was shrinking faster than I could add to it!

The compost in one of my bins had been maturing for nearly a year, and was ready for using, so I transferred the whole lot to the new bed.  In my next photo you can see the lovely dark, even material at the base of the plastic bin. I never use the little flap that they provide for you to remove the matured compost. I just lever the whole bin off with my spade and wade in. 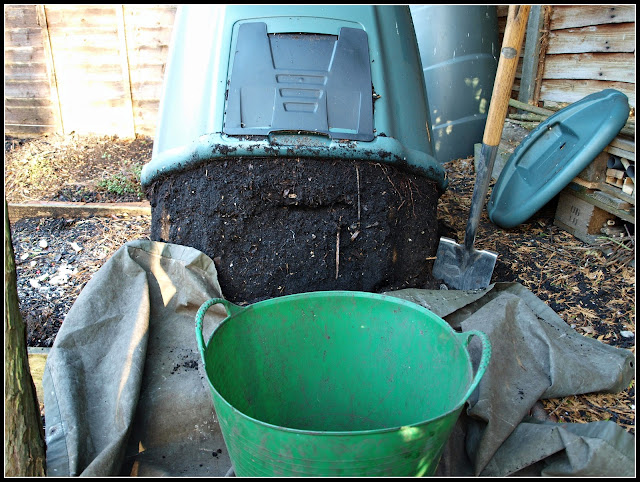 The old Army groundsheet is a godsend here: it prevents the compost going all over the shingle as I shovel it into the rubberised "Trug-tub" to move it across the garden.

Several (many) trips later, the raised bed was full to the brim with new compost. 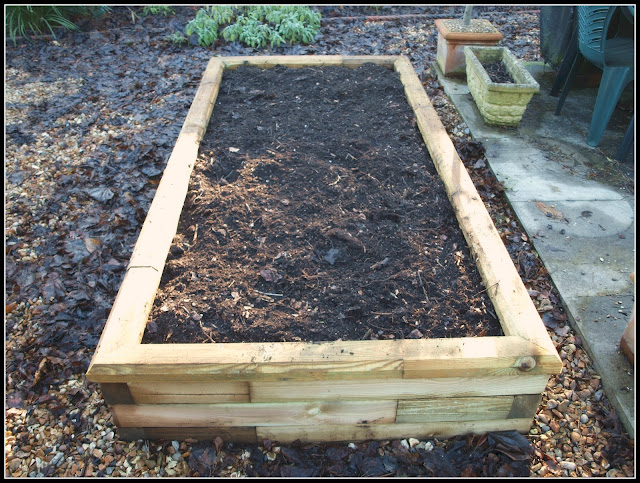 Although the bed looks full now, I know that the compost will shrink a lot as it gets saturated with rain. Actually, that's no bad thing since it needs to be fairly firm if I am going to grow nice veggies in it. In a month or so I will apply a dose of pelleted chicken manure and then we'll be ready to roll...

I can't emphasise enough how important it is to give your veggies good compost to grow in. "Feed the soil, and the soil will feed the plants" is a good policy to adopt. In my opinion it is a criminal waste to send to landfill the material that could easily be converted to compost in your own garden with minimal effort and financial outlay. Even those people who buy most of their fruit and veg at a supermarket can create plenty of their own compost, just by using all the skins and peelings from the kitchen - which when treated correctly quickly break down into a soil-like substance packed with nutrients, and which plays host to all manner of beneficial insect life.

My method of making compost couldn't really be easier. I just add whatever organic material I can find - trying to maintain a roughly even balance between the "Greens" (soft material) and the "Browns" (dry material) - and then just leave it to rot for several months, aided by as many worms as possible. I do occasionally aerate the contents of the bin by thrusting a long piece of wood into it in several places, but that's it. This particular bin-load that I have been writing about didn't have many worms in it, and I'm wondering why. Usually there are literally thousands. It did also seem to be a bit drier than usual, so maybe the worms had eaten all the green material and moved on elsewhere? This bin lives at the base of my "Fish tree" (Don't ask. I've explained the origin of this name too many times already), so maybe the tree's roots had sucked some of the moisture out of the compost bin? Anyway, now that the compost is exposed to the elements it will soon be wet enough!

I can hardly wait to get planting now...
Posted by Mark Willis at 16:00