Do they have a category for Spinach at vegetable shows? I suspect not. The Spinach would wilt before anyone got round to judging the entries. Which is perhaps a shame, because I reckon I could win a prize with mine - certainly if size were one of the criteria. Some of my spinach has leaves nearly two feet tall: 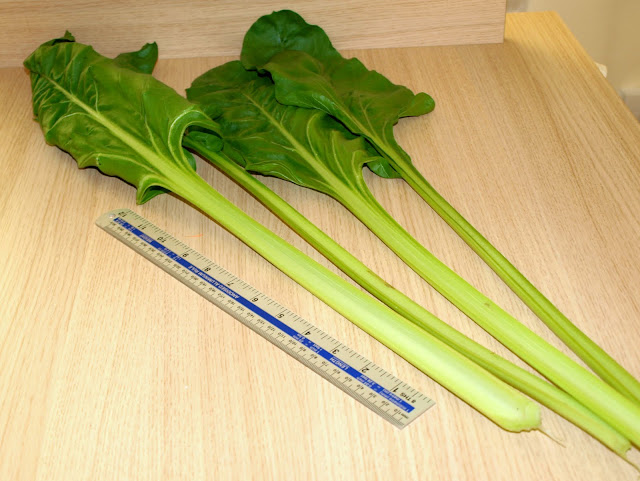 The sad fact is though that this year I have hardly eaten any of my Spinach, purely because the Swiss Chard has done well too, and if it's a choice of Chard or Spinach I choose Chard every time. Not only can you use the stems of the Chard as well as the leaves, but also the Chard leaves have a better texture, colour and flavour than the Spinach - it's a little sweeter; maybe you'd say "less acidic"? 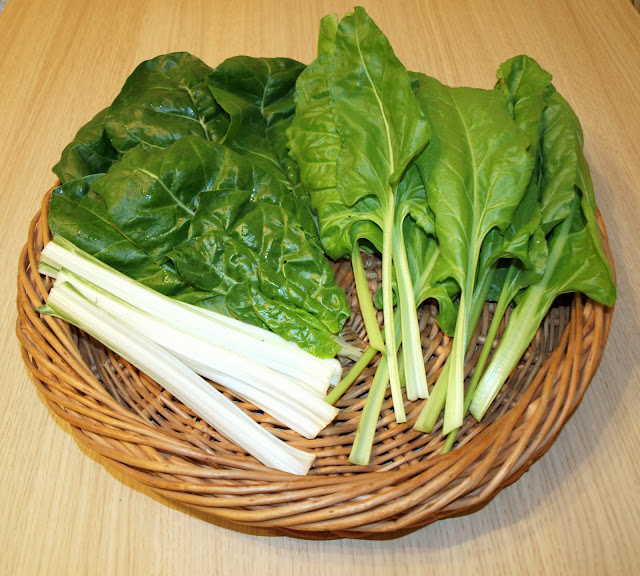 ﻿ Of course I'm referring to Perpetual Spinach, not true Spinach, which I know is more delicate. I've tried many times to grow the normal Spinach (several varieties), but it never does well in my garden. The best results I have had were with "Mikado F1", an oriental hybrid, but even that wasn't great. It ran to seed very rapidly, despite getting plenty of moisture. Perpetual Spinach is less prone to bolting (but not immune, I hasten to add).

My Perpetual Spinach and Swiss Chard were sown in the Spring (20th March), grew rapidly, and have produced leaves throughout the Summer. Most of them also produced flower-stalks, but I cut these off at the base, and the plants are now producing another batch of young leaves. If I leave the plants in the ground they will probably survive the Winter (though they will inevitably look dead), and may produce another crop of leaves in the early Spring. On the other hand, I may just dig them up and start again!

This year I have had a lot of trouble with leaf-miner insects. They tunnel into the leaves (they love both Spinach and Chard, but also attack my Beetroot and Parsnips), causing unsightly brown patches which soon turn slimy. 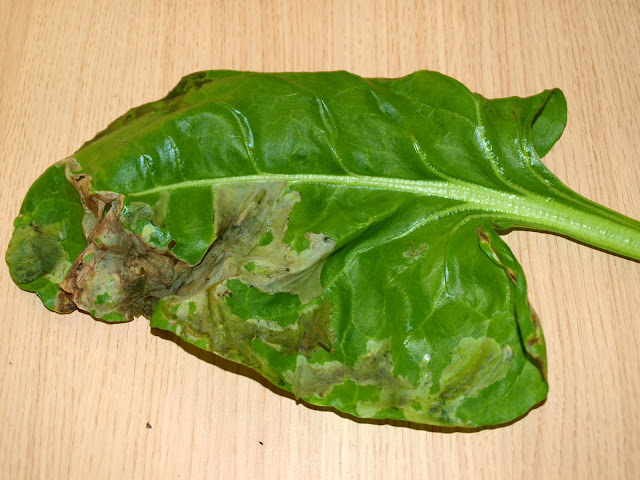 My policy on this has been to ignore it, and just choose for the kitchen leaves that have not been affected, which is OK when you have more than enough to meet your needs. Occasionally I pick off the worst-affected leaves, but I suppose that may actually be a bad plan since it may divert attention to the unaffected leaves!

Here's a closeup of the leaf pictured above. You can actually make out a couple of the leaf-miners - caught in the act. 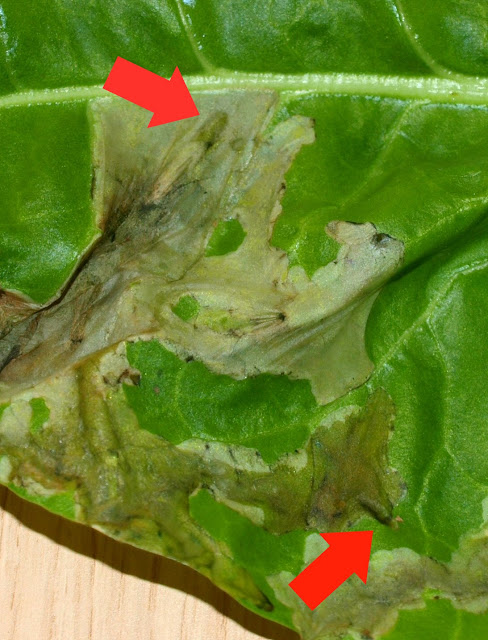 How do you cook your Spinach (do you cook it at all??)
Saag Alu?  Spinach and Ricotta pancakes?  Eggs Florentine? Why not suggest a recipe for me...
Posted by Mark Willis at 17:30