Late Summer / early Autumn is a time when lots of vegetables mature in my veg plot. I have been harvesting lots of lovely stuff. When I say "lots", I mean "lots by my standards". As most of you know, I never grow a huge amount of anything, and we are certainly not self-sufficient. Nevertheless, it is so satisfying to harvest from time to time vegetables that I have grown myself. Home-grown vegetables have a huge amount more flavour than anything you can buy in the shops.
In view of the blight that has hit my tomato plants, I decided to pick all the fruits that were anywhere near ready, for indoor ripening. We now have a house full of tomatoes, and I have been making more tomato sauce for freezing, and Jane has made a big batch of apple and tomato chutney. Most of the ones in this first photo are of the variety "Tropical Ruby". 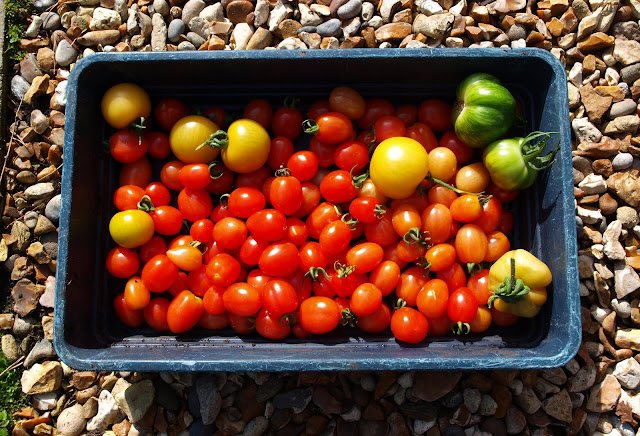 As well as the tomatoes, I lifted a few more of my potatoes - more of the "Charlotte" variety. I don't have many more potatoes left now, just one pot of "Pink Fir Apple", and those re-planted ones that may or may not produce a few more tubers. 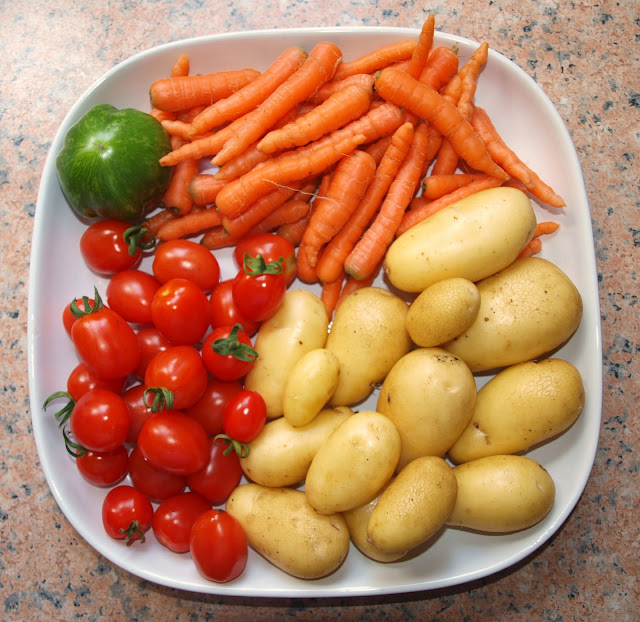 As you can see, I also got some more of the Finger carrots. These are the last ones from the second batch grown in washing-up bowls. They have been very successful. Even these last ones are really clean. Only one carrot from this lot was infested with Carrot Root Fly, which for me is a major breakthrough. For those of you who have not been following this experiment, the gist of it is that the washing-up bowls were kept well above ground level in the hope (justified, as it happens) that this would put them above the cruising height of the flies.

I have also cleared the last of my red Beetroot. This crop has also been very productive this year. Even this last batch I have lifted consisted of 19 roots. OK, some of them were very small , but some of them were pretty respectable. I picked out the best 8 to be photographed: 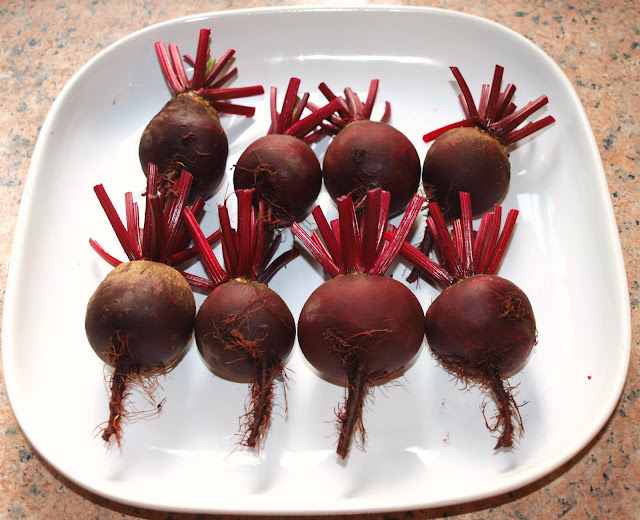 ﻿Did you notice the couple of green tomatoes in the first two photos? They are "Green Zebras". These are the  first ones that have been really nice. I have now learnt to judge by the colour and feel when they are ripe. The first few we ate were slightly under-ripe and had not fully developed their flavour and texture. I now have about 20 more Green Zebra fruits to enjoy, but I will make sure they are really ripe before eating them. Next year I think I will revert to growing mostly red tomatoes. Something deep within me says that tomatoes ought to be red - and of course it's so much easier to tell when they are ready!
Posted by Mark Willis at 17:30