The other day a friend kindly gave me about about 5 pounds of pears. They were mostly very firm (i.e. under-ripe) and just perfect for making one of my favourite delicacies - pickled pears. 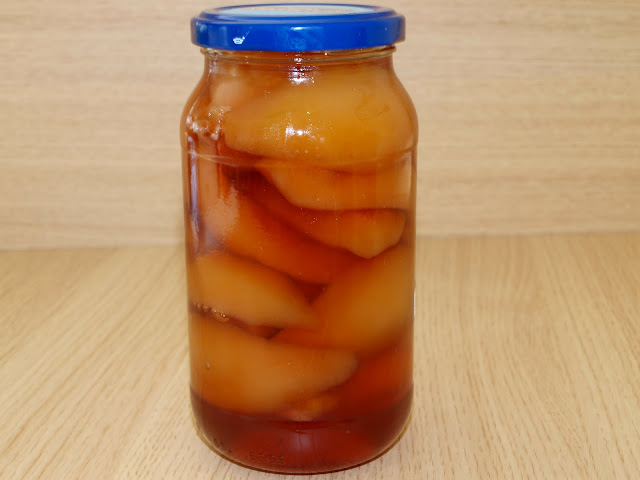 With a bit of help from Jane (although she has only done these a couple of times before) and with reference to one of our longest-owned cookery references, the Cordon Bleu monthly magazine, I made them into these:- 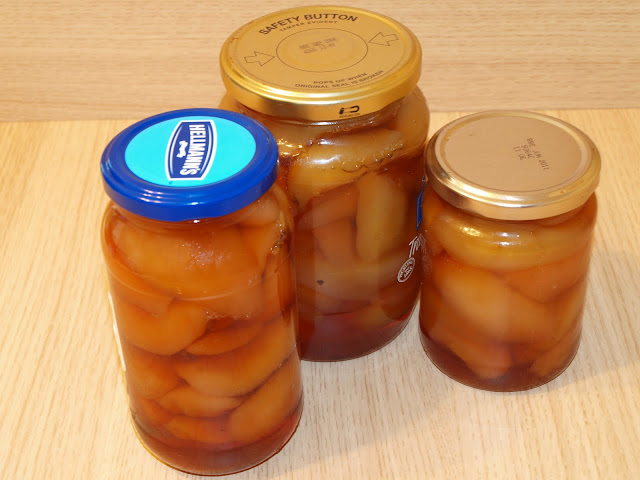 This is the recipe, loosely based on the Cordon Bleu one, though I suspect that pickled pears have been made in much the same way in many households around the world for hundreds of years!

Ingredients:-
4 pounds of cooking pears (must not be too ripe)
1 pint of white wine vinegar
1.75 pounds of granulated sugar
One small stick of Cinnamon
About 6 cloves

Method:-
Tie the spices into a small pice of muslin or J-cloth to form a sort of Bouquet Garni
Put the Bouquet Garni into a big pan, along with the vinegar and the sugar
Heat the pan slowly to boiling point, stirring frequently to ensure that the sugar fully dissolves
Remove the pan from the heat and allow to stand
Peel the pears, cut them into quarters and remove the cores
Place the pears in a pan and add just enough water to cover them
Simmer the pears for one hour
Drain the pears and add them to the pan containing the vinegar syrup
Simmer again for about another hour until the pears are soft and translucent
Drain the pears, retaining the syrup, and pack them tightly into jars
(Note: it's best to warm the jars in the oven for a few minutes beforehand to avoid cold glass cracking on contact with hot pears)
Return the vinegar syrup to the heat and boil it for a few minutes until it thickens (but doesn't caramelize)
Allow the syrup to cool a bit and then pour it into the jars, covering the pears completely
When cooled, cover with tight-fitting lids.

Now the hard part:
Leave to mature for ONE MONTH before eating! Enjoy. 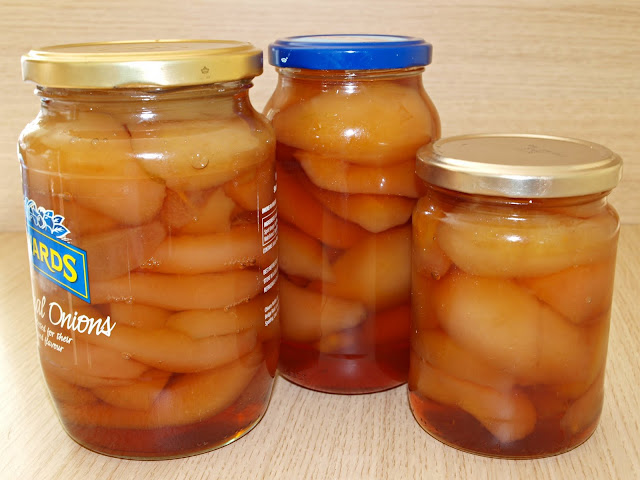 Pickled pears are a great accompaniment to practically any cold meat, especially ham or turkey, and cheese (especially blue cheese). Eat them in circumstances when you might otherwise have a pickled onion (though be aware that the pears will be sweet!)

Today I also harvested nearly 2kgs of cherry tomatoes, a mixture of the red "Maskotka" and the yellow "Tumbling Junior Yellow", along with a few of the bigger "Ferline" ones, and a couple of the "Green Zebra". The latter are not fully ripe yet, but I want to ripen them indoors so that I avoid the risk of losing them to blight or bad weather. Here they are on the Dining Room table next to my pickled pears. In the background is a tray of Physalis fruits, which I will write about some other time... 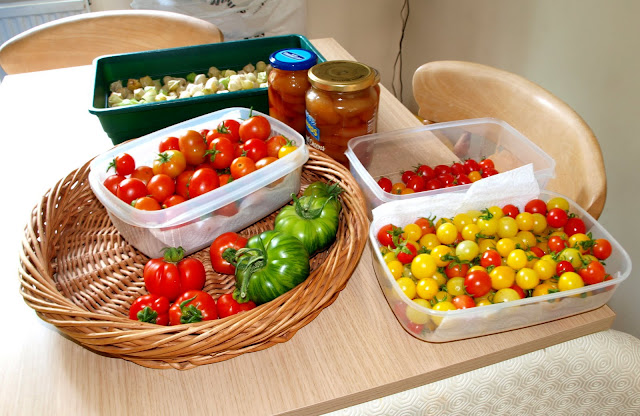