Last weekend, Jane and I went across to France to visit our daughter Fiona and her husband Juan Fernando, who live in Ferney-Voltaire, France (very close to Geneva, Switzerland). The town is named after their "Patriarche", the famous writer and philosopher Francois-Marie Arouet, who gave himself the pen-name Voltaire. Here's a statue of him in the middle of the town: 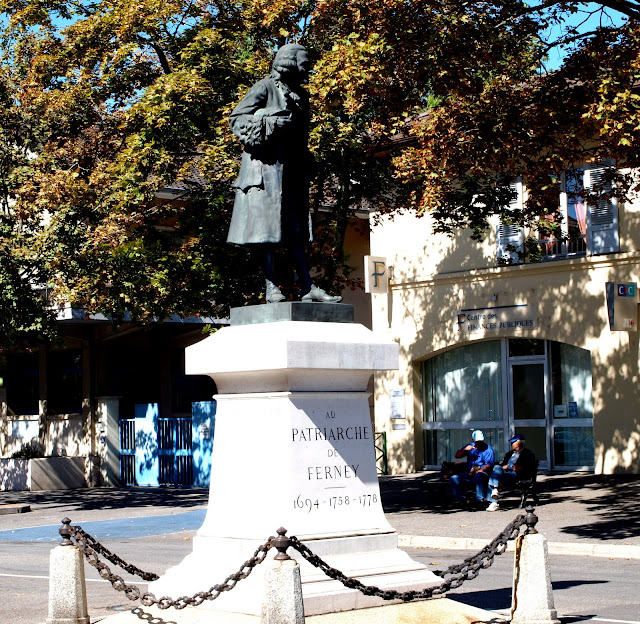 Despite the statue, I suspect that another type of Patriarche is better known to most Ferney residents - the rrestaurant / bistro called "Le Patriarche". Fiona tells me that they serve a really good vegetarian Couscous... 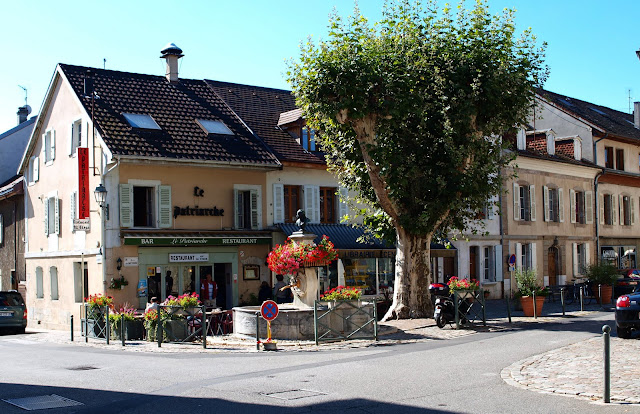 Voltaire lived for many years in this chateau in the town. It has a fabulous view looking out towards Mont Blanc. 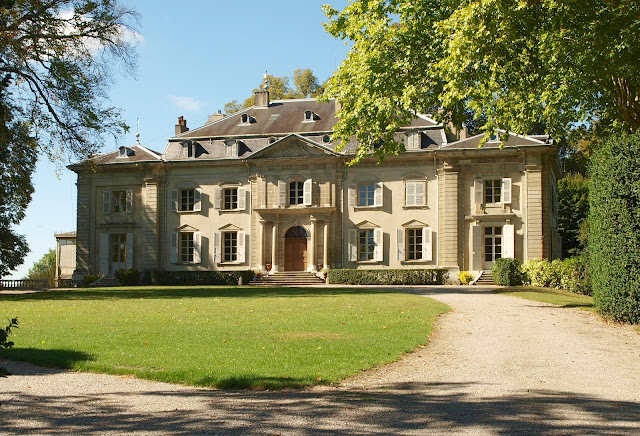 This trip of ours was on the strength of a competition win by Jane: she won a VIP trip to the "Ultra Trail de Mont Blanc" event, in which competitors run a staggering 166km  in a maximum of 46 hours over some incredibly difficult terrain. Fiona is a very keen runner and was interested in this event, so we passed over to her the sporting part of the trip, whilst agreeing to "flat-sit" for them while they went off to Chamonix for the event. Actually, our main task was to look after another "Voltaire" - Fiona's cat! 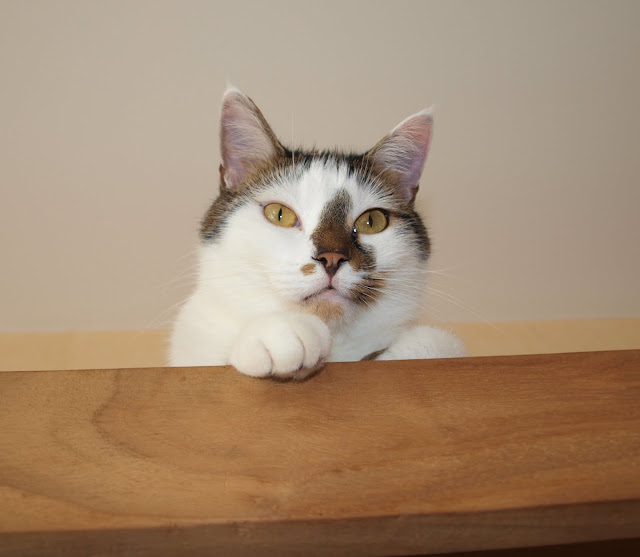 As it happened, I think it actually worked out the other way round - Voltaire supervised us. He advised us in no uncertain terms when meals were due, and how and when games should be played. Here he is advising Jane on how good wine should be enjoyed (in this case a lovely Sancerre, aptly chosen by son-in-law Juanfi, who understands perfectly our tastes in wine...) 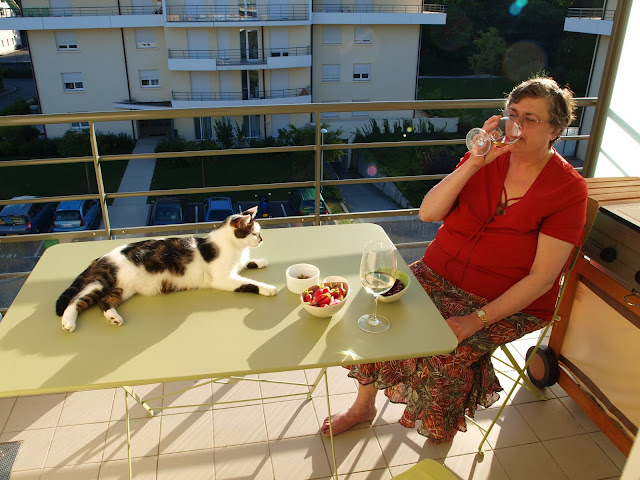 In fact, our stay was a blatant excuse for us to experience a 72-hour "fix" of French cuisine. We went out for dinner on Friday night at a local restaurant - the "Hotel de France" where we had a sophisticated and really enjoyable meal in pleasant surroundings and looked after by welcoming and genuinely knowledgeable staff. Highspot of the meal for us was the amazing cheese trolley, from which we were offered a choice of at least 30 different cheeses, all presented at the peak of perfection, and expertly served by our skillful waitress. For me, another star performer was my Oxtail Ravioli served in an intensely savoury bouillon lightly flavoured with aromatic truffles. Jane was also hugely impressed with her starter which involved a scallop ceviche, an asparagus mousse and smoked salmon served in a sort of canoli made of feathery filo pastry, garnished with smoked salmon ice cream! 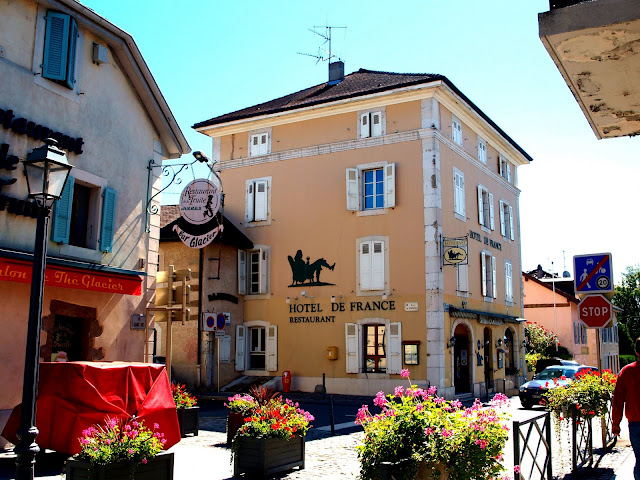 On Saturday we comprehensively "Did" the market in Ferney, which offers for purchase the most tantalizing selection of food and drink produce you could ever imagine. This is what we bought: 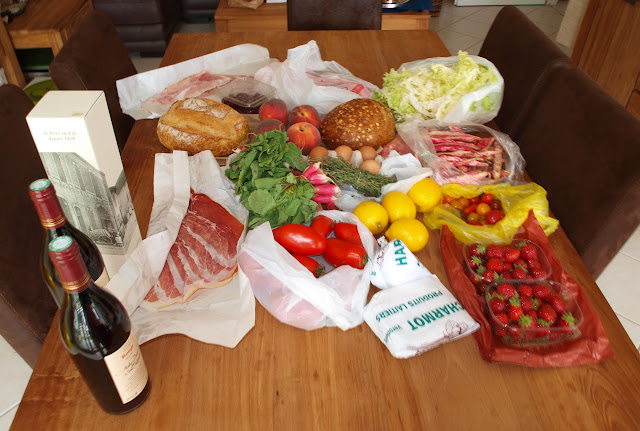 See how many things you can identify in this photo... wine, cheese, ham, bread, strawberries (the most gloriously delicious "Mara des Bois"), peaches, tomatoes, endive, radishes, fresh thyme, pork, fresh Borlotto beans, olives etc, etc.... One of our favourite ways of enjoying food is to have lots of individual items, presented "Meze"style - that is, not all at the same time, but in succession, with one gorgeous flavour following another. Our enjoyment was enhanced by being able to eat our dinner outdoors, sitting on the balcony, watching the sun go down. Idyllic!

On the Sunday, with Fiona and Juan arriving back from Chamonix in the early evening after an exhausting weekend, we had dinner waiting for them, made from some of those things we had purchased on the market the previous day - pork and bean casserole, with fresh Borlotti., accompanied by salad and crusty bread, and an elegant St.Chinian wine, all followed by a cheeseboard which included the local "Bleu de Gex" and "Tomme de Savoie".

Coming back to England on Monday was a definite shock to the system, made worse for us by having to endure the scandalously-priced food on offer at Geneva airport, and the laughably basic in-flight catering arrangements. I thank my lucky stars that I am married to someone who is probably one of the best amateur cooks in England, and that we both have a strong love of good food and drink - such that we will successfully survive on a diet of "English" food until our next opportunity to visit France!
Posted by Mark Willis at 17:30