Here in Fleet, Summer is already a distant memory. Did we have one??? We are definitely into Autumn now. The daytime temperatures seldom get above 20C and the night-time ones are now in single figures. We'll have our first frost very soon I think.

I think it's time to give you an update on what's in the garden right now.


And although I haven't yet harvested any, the Radicchio is looking good. The plants are forming nice tight hearts.

I finally managed to harvest one more cucumber, though it is far from impressive. You can see it here along with the first handful of the "Delinel" French beans. The purple "Amethyst" ones have just about finished now. 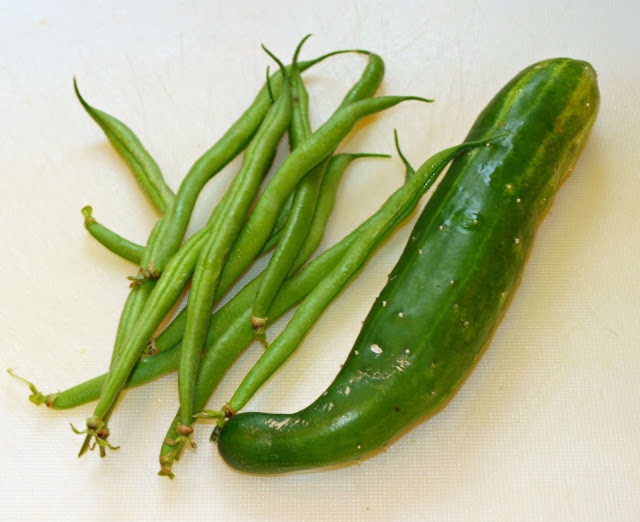 I have plenty of tomatoes. This one is "Tropical Ruby", which has produced a mass of little plum-shaped red fruits. It's nice that they have ripened much later than the "Maskotka" ones, thereby extending the harvest period. 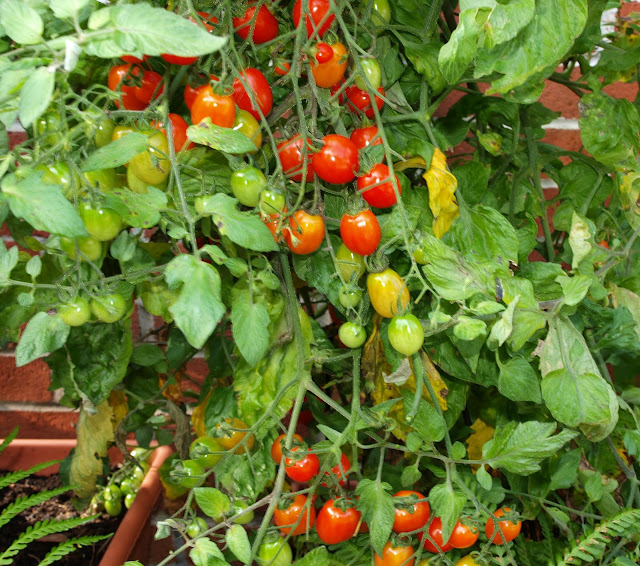 The "Pinocchio's Nose" chilli now has a few "conventional" fruits - ones without those knobbly bits. A couple of them are quite long now. This one is over 15cm:- 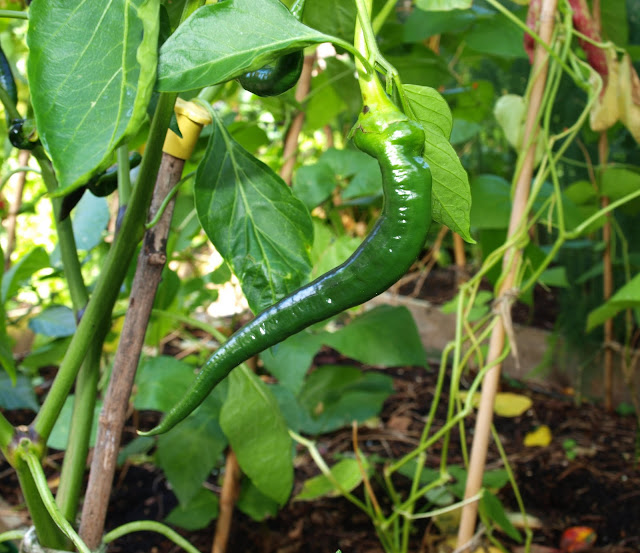 And this is one of those chillis that is convinced that it is a Bell Pepper... 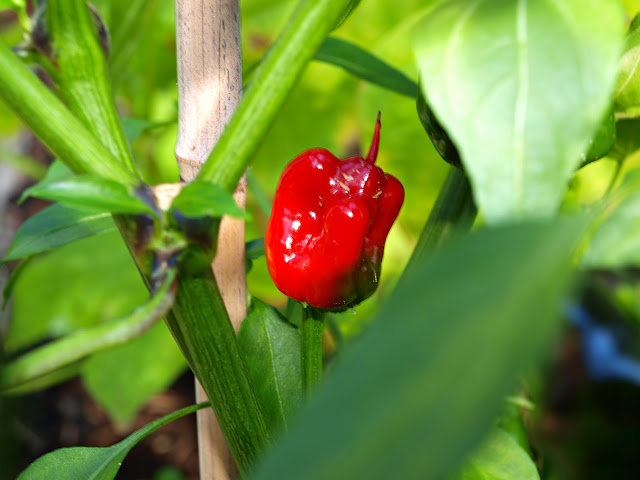 I have picked quite a few chillis at the green stage, because Jane likes to have a supply of them in the freezer for dishes that require heat without the red chilli colour: 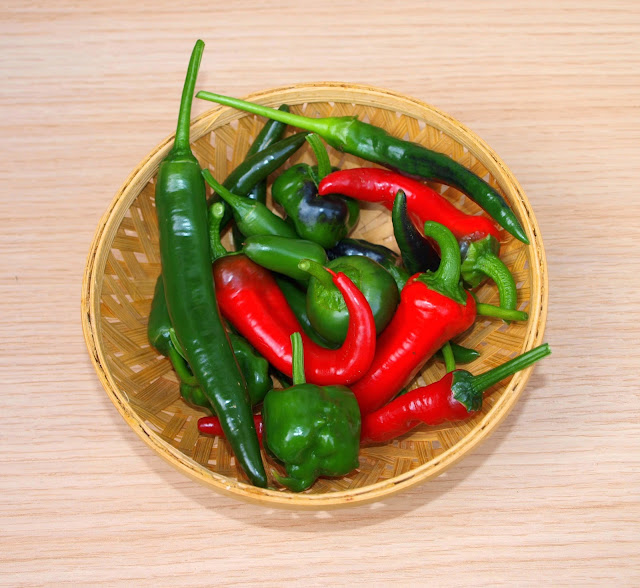 I thought the Runner Beans were over, but they have decided to produce some more flowers. Is it too late, I wonder? 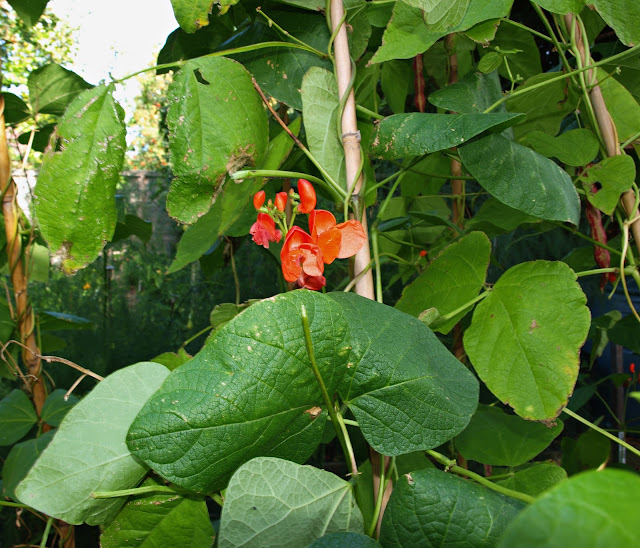 ﻿
I have harvested most of my Borlotti now, but there are still a few pods on the plants which are not yet ripe, so I'm going to leave them a bit longer. If the pods still have a green tinge, like these, I don't reckon they are ready. 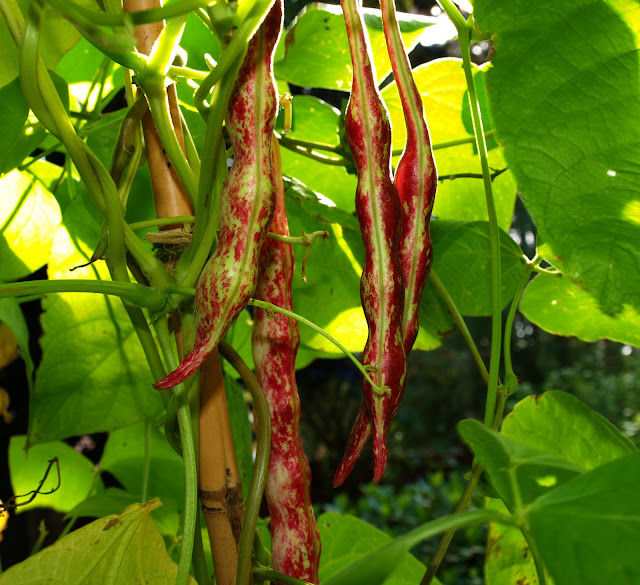 Remarkably, the Asparagus is still producing more spears. It doesn't want to give in! Of course I'm not picking these, but leaving the fern to develop in order to build up the plants' energy for next Spring. 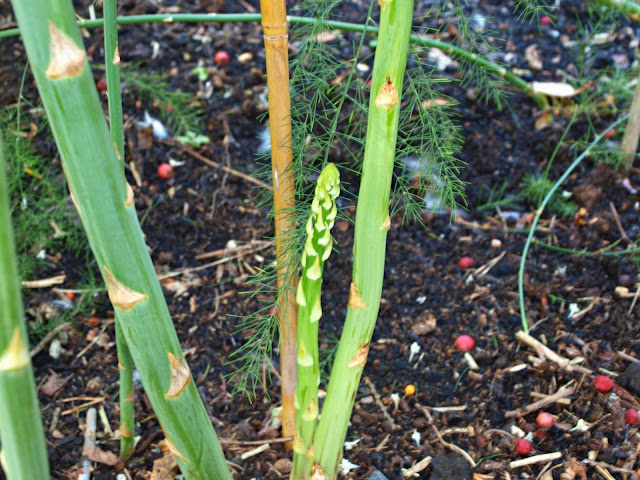 I think the "Conference" pears are only a few days away from being ready for picking. Although they are rock-hard, their colour is beginning to be more yellow than green. 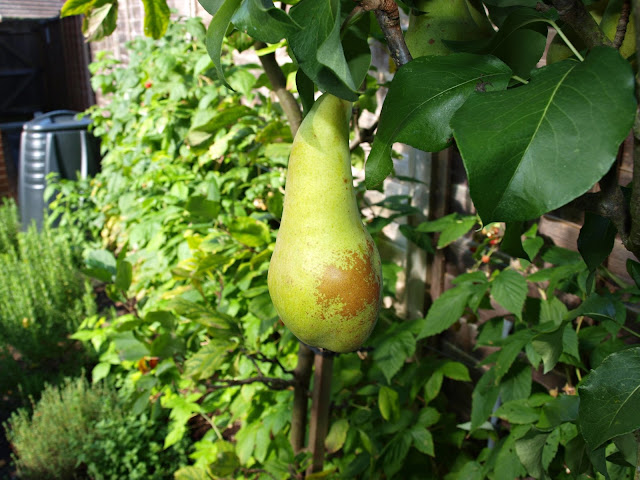 Actually, while I was away on holiday recently, a couple of the pears fell off - or were perhaps blown off - the tree. I'm not absolutely convinced that human hands were not involved, since I'm fairly sure there is one less pear than I had previously thought, and the two that had "fallen off" happened to be draped conveniently over a branch on the other side of the tree to where they started from. Anyway, they are indoors now, ripening in a fruit bowl on the kitchen windowsill.
The Raspberries are still going strong. We have had a good quantity of fruit this year, and I think the canes appreciated the cooler Summer. I have also made a greater effort than before to keep them well watered. Their roots grow very close to the surface, where the soil dries out very quickly. 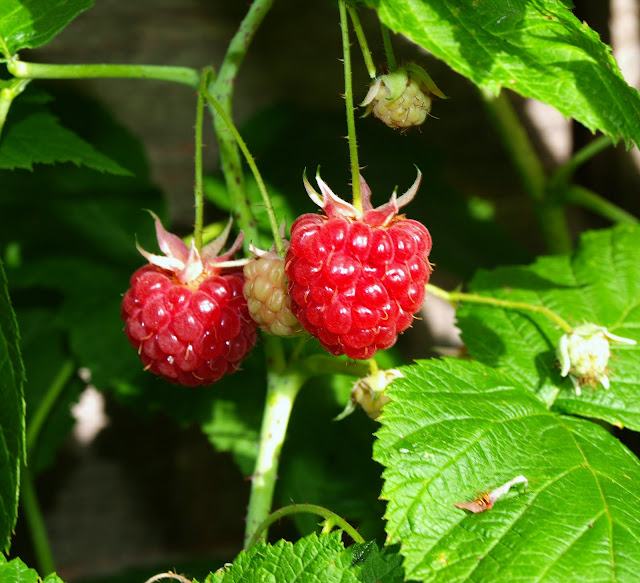 It looks as if we will get a few peas too. The pods are beginning to swell. It won't be a big harvest by any standard, but having any peas at all in September / October will be a first for me. 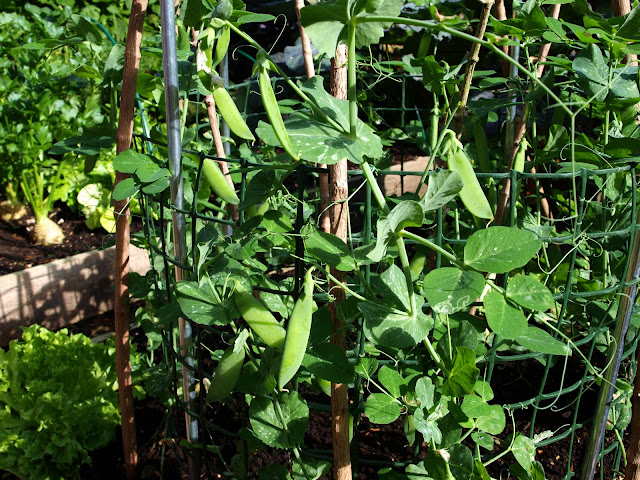 The message from all this is that I still have plenty of crops to harvest - and I haven't even mentioned the Parsnips, the Red Cabbage or the Cavolo Nero yet. And I even have a few potatoes ready for lifting too. I'll write about the "Winter" veg in a day or two...
Posted by Mark Willis at 17:30