Those people who grow potatoes and tomatoes outdoors live in constant fear of the fungal disease Blight. When it strikes, your plants are probably doomed, because few varieties will survive a blight attack. There are one or two types that show some blight resistance these days (e.g. the tomatoes "Ferline" and "Legend", and some of the Sarpo potato varieties), but resistance is not the same as immunity, and it usually just means that your plants take a bit longer to succumb! This is certainly what I have found with "Ferline", which I have grown for the last several years. 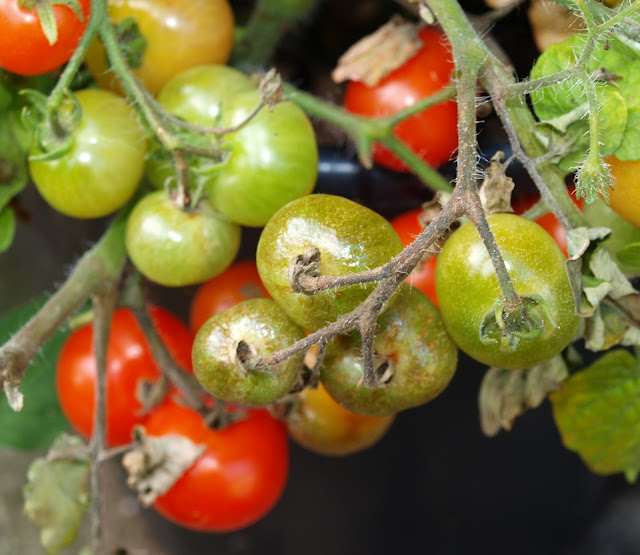 Since blight is an air-borne disease the best way to avoid blight affecting your plants is of course to grow them in a greenhouse, but if that is not an option, some people erect a temporary frame to support plastic sheeting over the plants, which is apparently reasonably effective.

The advent of blight is normally associated with warm, moist conditions, so in the UK it typically appears in late July or August. This year we have got away with it until quite late (probably because our Summer was a lot cooler than normal), and none of my potatoes were hit, but I regret to report that many of my tomato plants are now affected.

The tell-tale signs are these: brown mouldy patches on the leaves 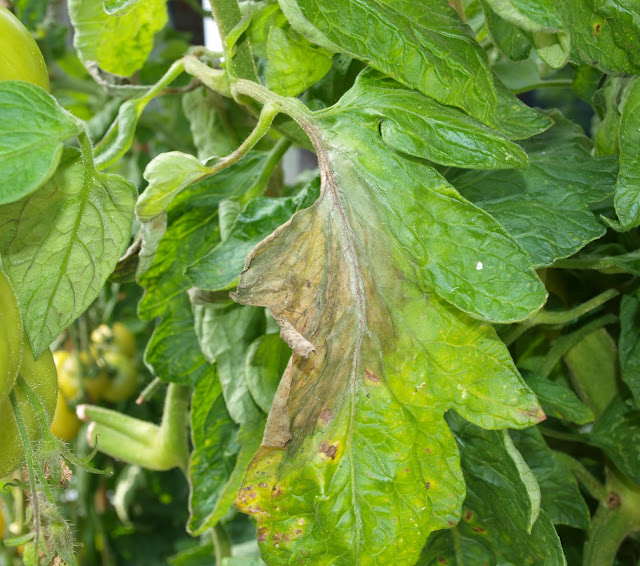 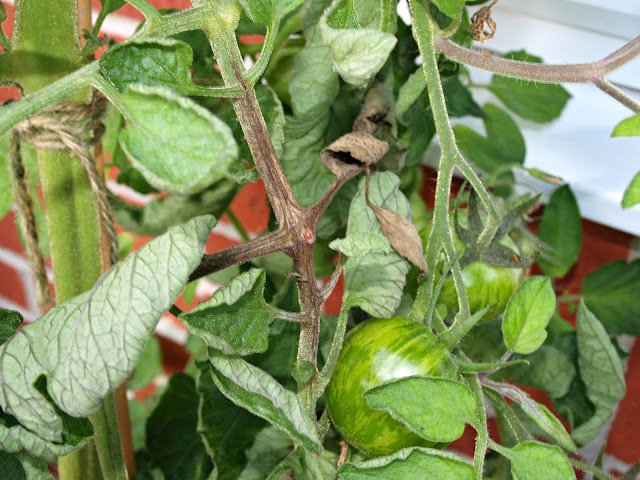 Fruits that initially go a sort of shiny bronze colour, and then brown and wrinkly 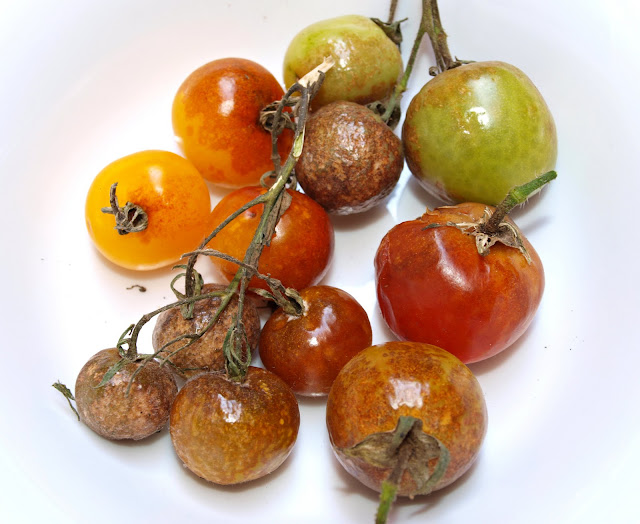 And then the whole plant collapses 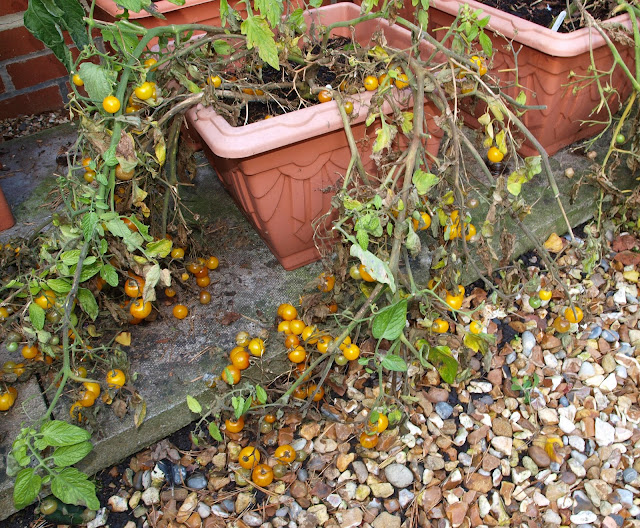 Once the signs of blight appear, there is not much you can do. You can cut off the worst-affected bits of your plant, which will help, but it won't be a cure. I usually pick immediately any fruits that are even remotely ripe, and ripen them indoors (keeping a close eye on them to see if they start going brown). By this late stage of the season, tomatoes actually ripen better indoors than out.

It is advisable not to put any blight-infected fruit or foliage in your compost bin, because unless the compost gets very hot the fungal spores will not be killed. I usually put my debris in a strong plastic bag (e.g. the type of bag in which I buy commercial compost), and then take it to the local Tip (Domestic Waste Facility).

Taking the photos with which to illustrate this post, I realised that even a bowlful of blighted tomatoes can be an object of "beauty"... I like the light and shade effects on this one: 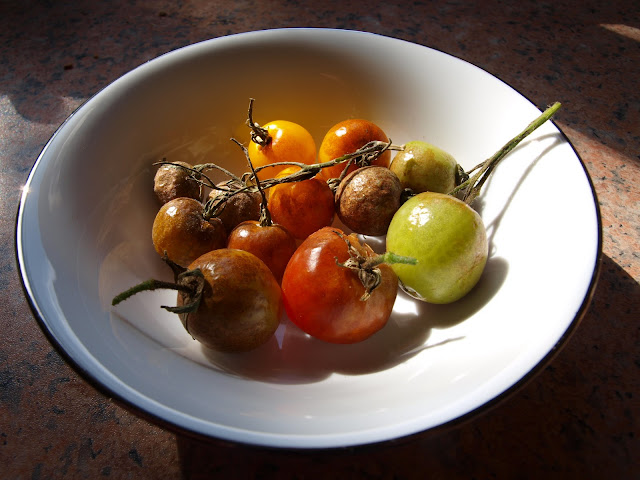 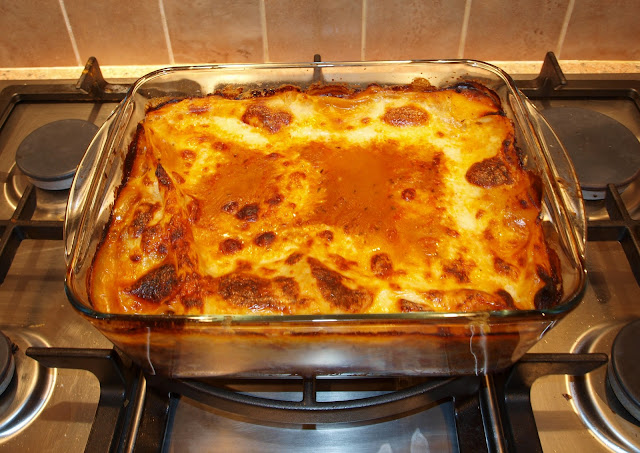 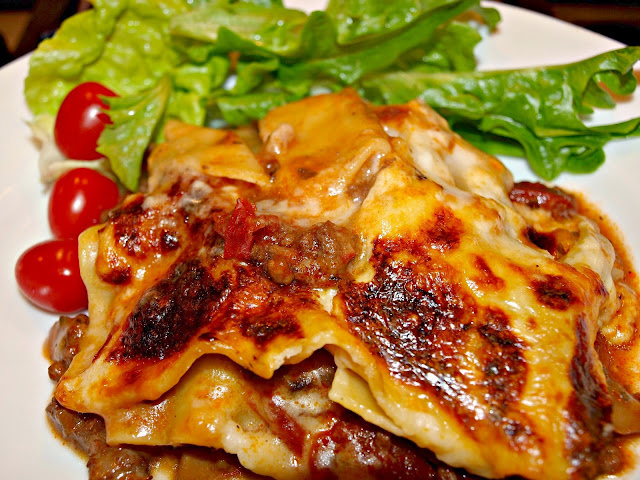