If you have wondered why I have been less conspicuous in the Blogosphere than usual, it's because I have been away on holiday again. [Sorry if I have not responded to your Comments, but you know how it is :-)]    Where did we go? Well, here's a clue: 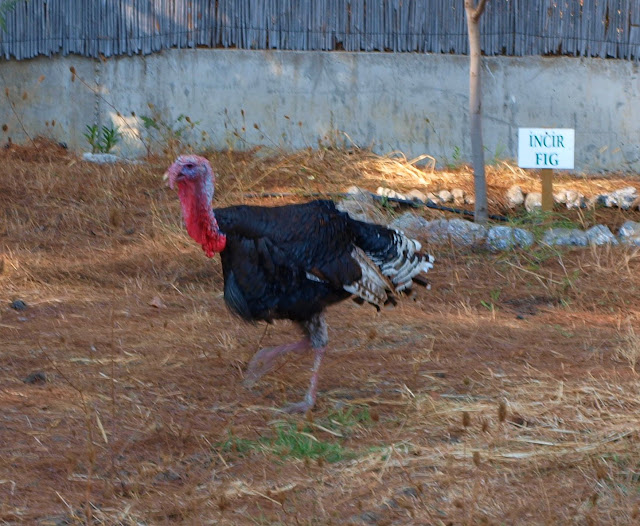 We spent a week in a place called Bördϋbet, in South-Western Turkey. We stayed in a fabulous hotel called "The Golden Key", about which I intend to write in a few days' time. In the meantime, I want to show you a few photos of some of the local fauna.

The hotel had a lily-pond which was teeming with frogs, which posed obligingly on their lily-pads in the sunshine. As you approached, the frogs would swiftly dive into the water - "plop, plop, plop..." 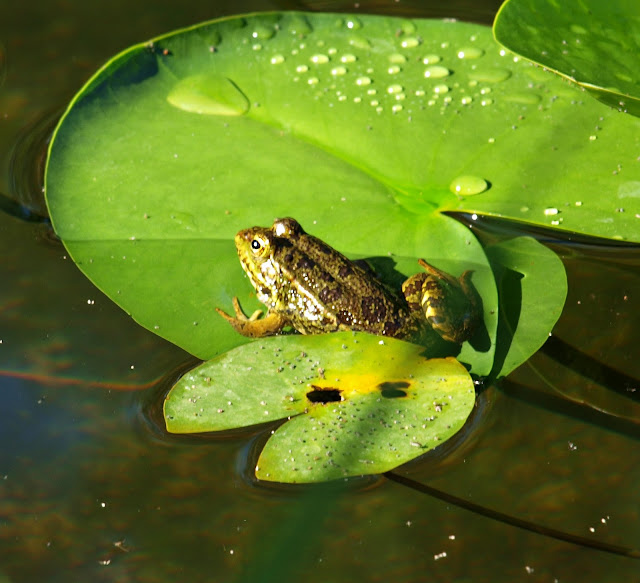 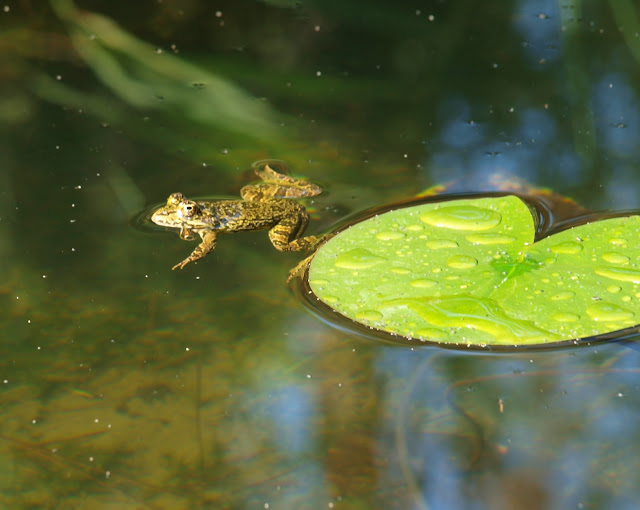 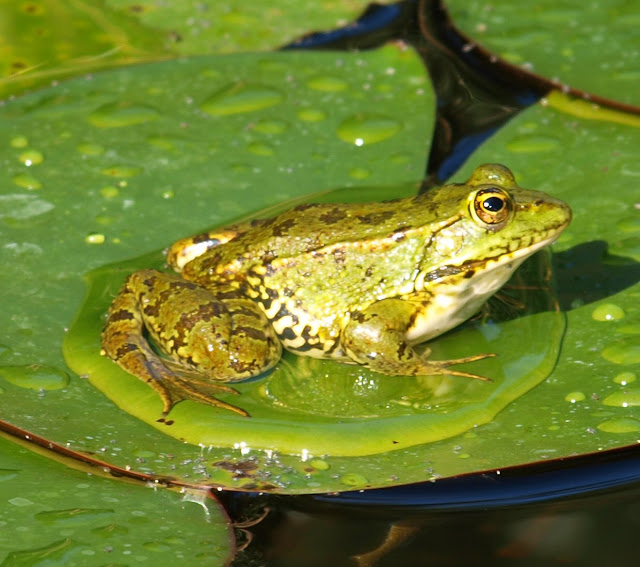 In the same pond, and elsewhere in the hotel grounds, there were lots of little turtles. They seemed so slow and ungainly, pottering around like wind-up toys. 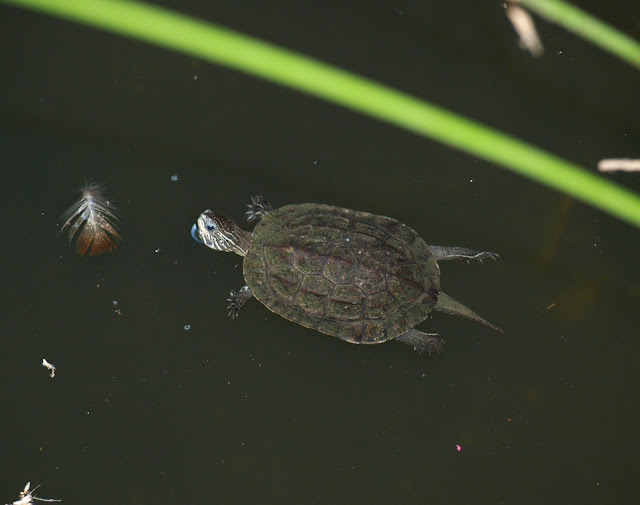 In the river I spotted this sinister-looking crab: 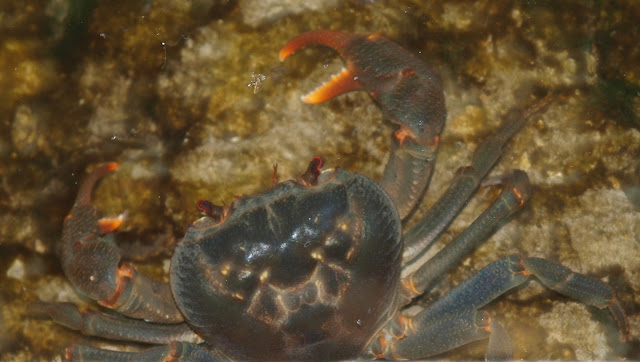 The river running through the hotel was absolutely teeming with fish, like trout, grayling and eels, as well as some "domesticated" fish like Carp. I'm no expert on fish; I just call these things "Goldfish", although many of them were not gold, but various shades of black, white, and yellow as well as gold. Note to self: taking photos of fish swimming is something that I need to practice... 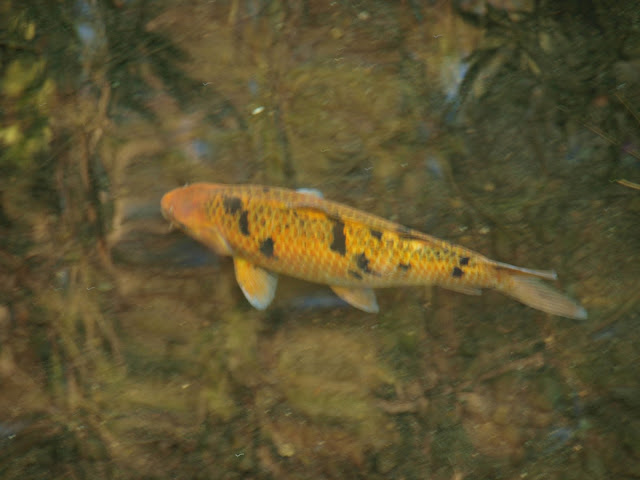 There were lots of ducks, chickens (including some exceptionally early-rising roosters), and a couple of swans. From time to time we were visited by a pair of peacocks. They would flutter clumsily up onto the balconies as if they owned the place (which of course they do). 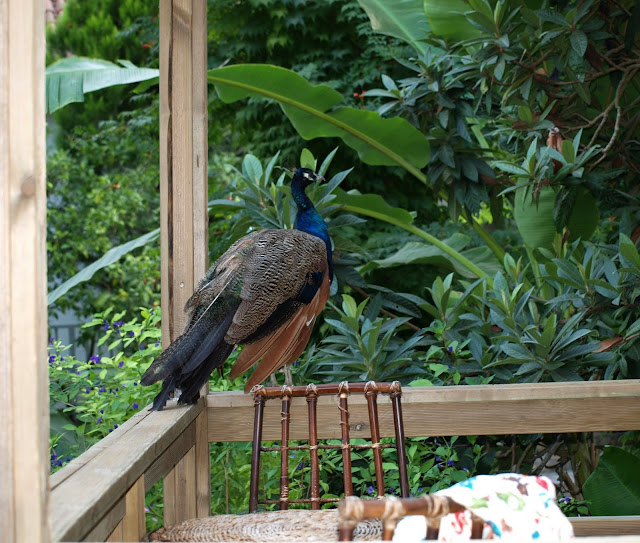 In the evenings we saw several Flycatchers doing their thing. They would perch on a branch near our balcony, waiting until a juicy ﻿insect wandered unsuspectingly into range, and then they would swoop down, devour the insect in mid-flight and return to the branch ready for the next sortie - all in the space of a couple of seconds. 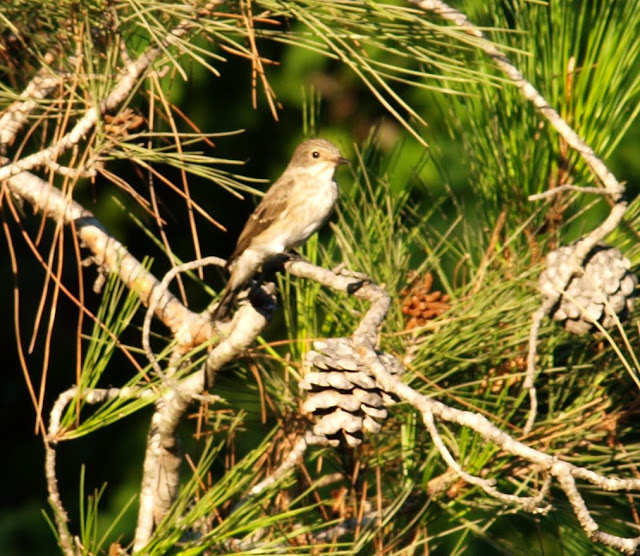 The whole area was alive with Cicadas. I never cease to be amazed at how something so small can make such a huge amount of noise! It's very hard to actually spot a Cicada. They must be very good at camouflage. We only saw one live one, and it was far too far away to be photographable, but I did see a couple of these, which I think is a "husk" of a Cicada. Do they shed their skins like snakes do, maybe?? 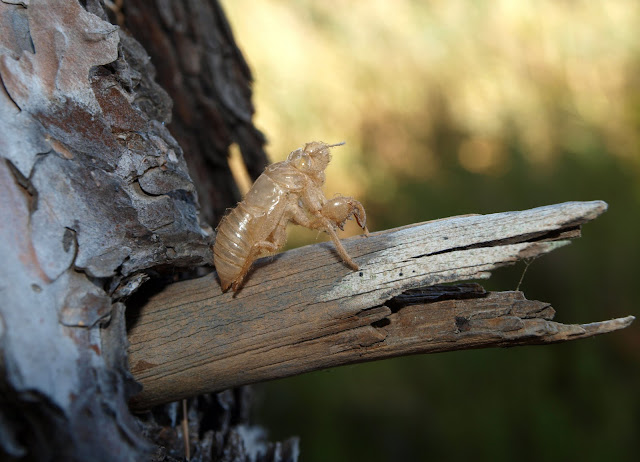 Talking of camouflage experts, what about this lizard? He seems to completely blend into the background. 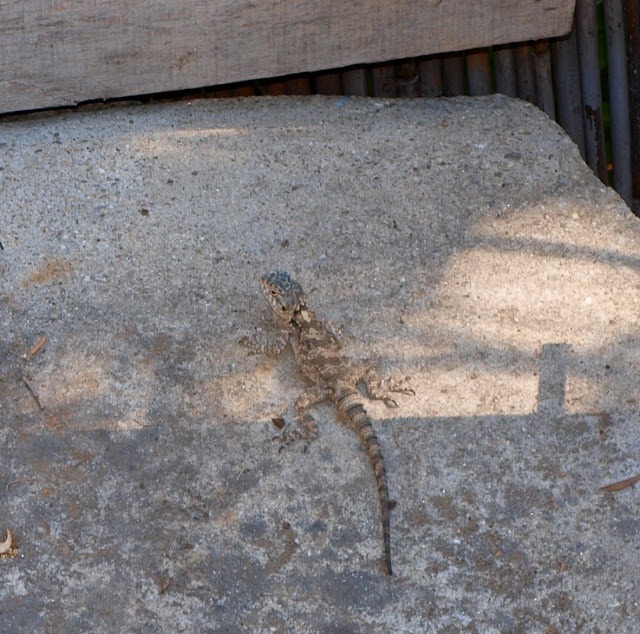 Likewise this cricket. You have to look very hard to see these. It's usually only when they move that you can spot them. 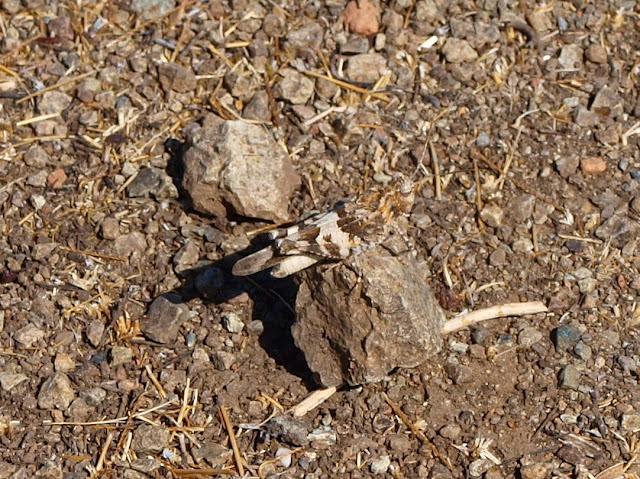 I don't know what type of spider made this web, but it look pretty fiendish to me. No fly that got stuck in that would ever get out, would it? 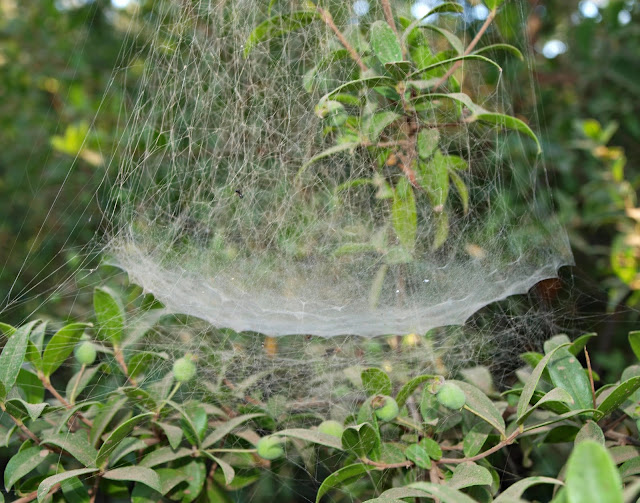 In the part of Turkey that we visited, the production of honey is a big industry. There are bee-hives all over the place, and every flower is positively besieged with eager pollinators and nectar-gatherers. 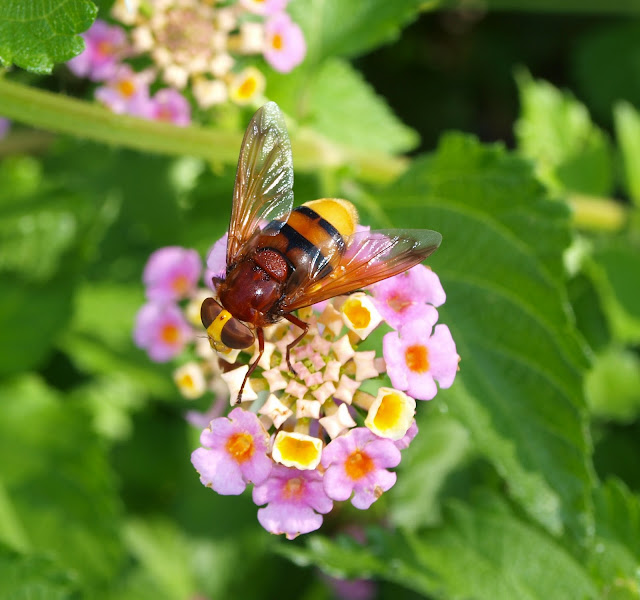 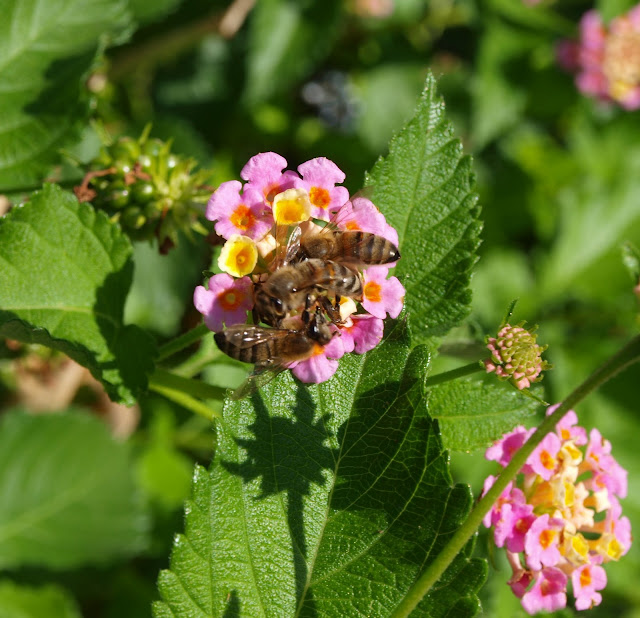 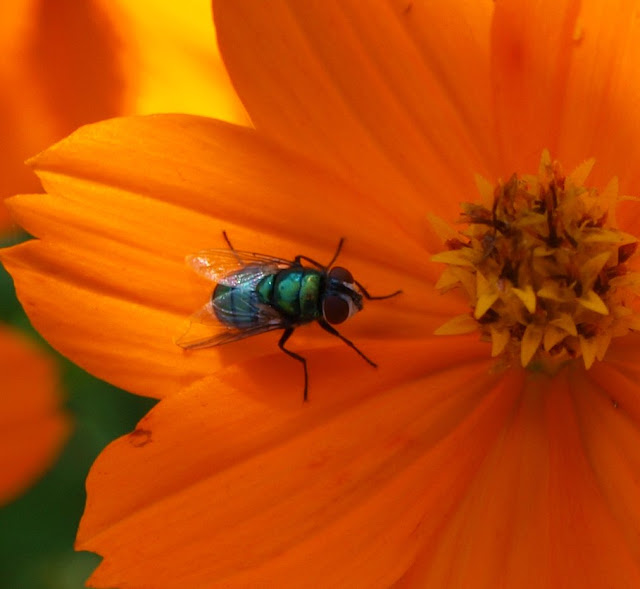 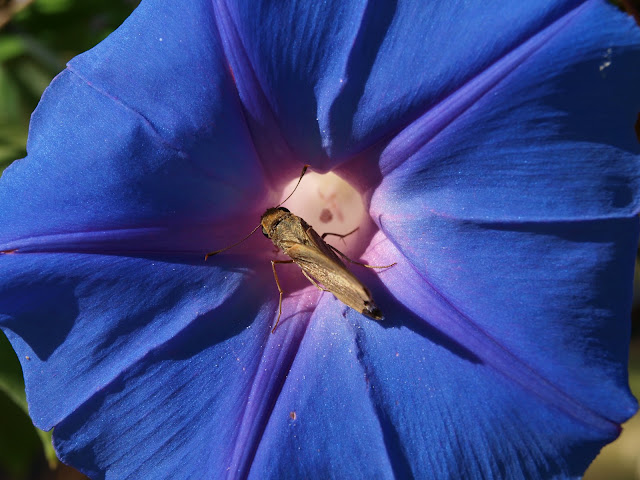 In a few days time I intend to write about the hotel's garden, which was a source of considerable interest for me, so "watch this space" as they say.
Nothing can quite beat one's own garden though. This is what I picked today. Tomatoes, beans and chillis. 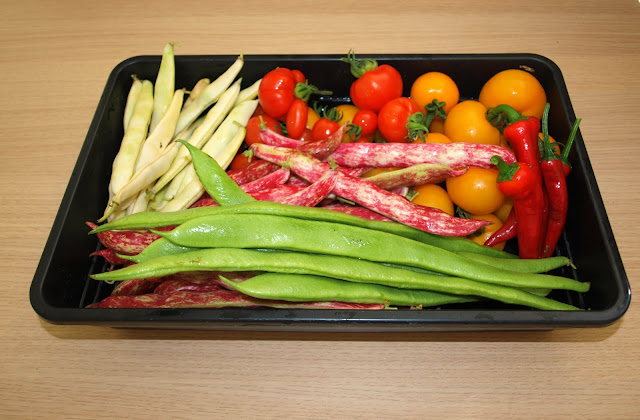