First off, let's be honest: this is A way to make Harissa, not necessarily THE way... 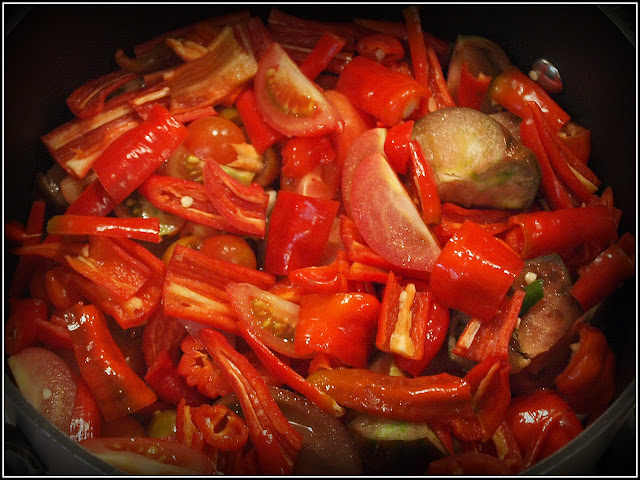 Harissa is a fiery, spicy, chilli-based condiment very characteristic of North African cuisine. I thought it would be a good way to make use of some of my home-grown chillis. I don't think there is any definitive recipe for this stuff, so having consulted a few online resources I decided to make my own version of it, loosely based on some of the recipes I had seen. Oh, and another thing: since it's pretty hot it's not intended to be used in big quantities. It's the sort of thing you add to a dish by the teaspoonful, not the cupful!

These are my ingredients. The bottle at the back is Olive oil. In reality I did not use the one pictured (which is a "posh" one), and I just used ordinary oil, not Extra Virgin. In the little bowls are Cumin, Coriander, Caraway and salt. 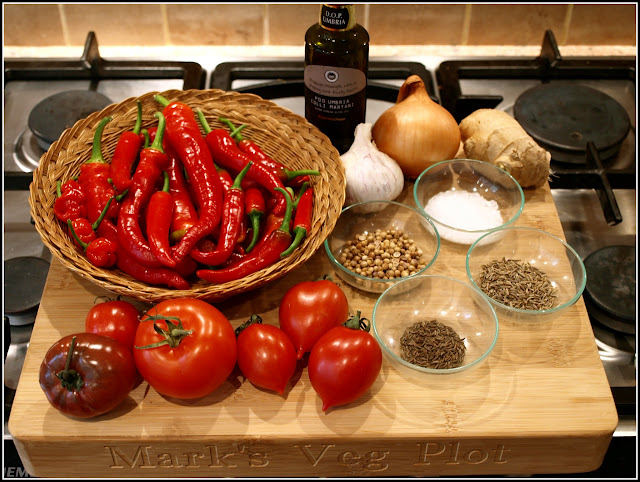 I used a mix of chillis. Some of them were small and fiery (the Scotch Bonnet Caribbean Antillais seen at the left of the basket), and some of them were the milder bigger ones. Most of them were "Ring of Fire", which is a good all-rounder - tasty but not stupidly hot. Likewise the tomatoes are a mixture of whatever I had available.

The first job was to toast the spices to accentuate their flavours. A minute or so in a hot dry frying-pan is all they need. Shaking the pan a few times will stop them burning.


You can tell when the spices are nicely toasted when they start jumping about in the pan. They also release a wonderful aroma. You need to be careful not to overdo it, because spices like these burn easily. When they are done they need to be reduced to a powder, either with a pestle and mortar or with a spice-grinder. We keep a coffee-grinder specifically for this purpose.


The most laborious task was to prepare the chillis. I cut each one in half lengthways and scraped out most of the seeds, though I wasn't too rigorous about this because a lot of the heat of a chill is in the seeds and the membranes to which they are attached. I wanted my Harissa to be quite hot! Of course I also had to peel and dice the onion, garlic and ginger. Prepping the tomatoes was quick and easy - I simply quartered them. 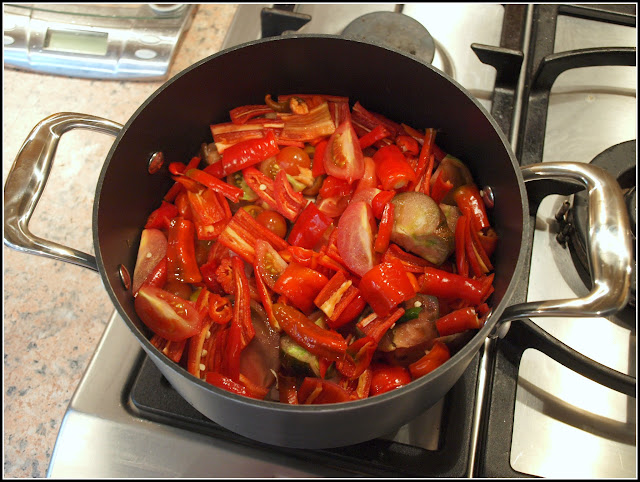 So then everything (including the salt and the powdered spices) went into the pan, with just a splash of olive oil to stop things from burning. I cooked the mixture over a low heat for about half an hour, until it was thoroughly soft. You can see in the next photo how the spices have made the mixture a little brown. I was a bit concerned at this stage that the end result might be unappetising in appearance, though in the event I need not have worried. 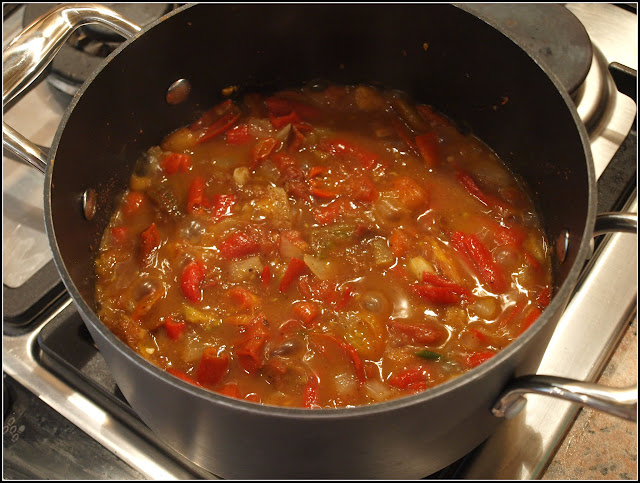 After allowing the mixture to cool a bit, I tipped it into the smaller goblet of our food-processor, added a glug of olive oil and gave it a long zuzz at medium speed: 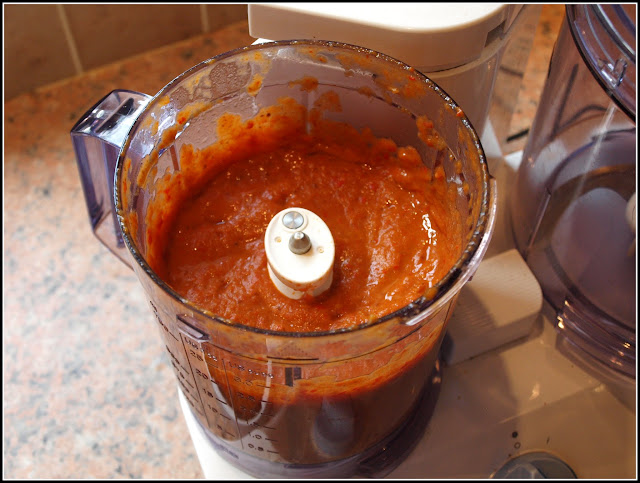 The red colour of the chillis began to show through once more! In the end the sauce came out almost orange in colour. The texture can be adjusted by adding oil or water, but the natural juice of the tomatoes was enough to make this unnecessary for me. The texture I wanted was not completely smooth, but just a bit grainy. Spoonable rather than pourable, I'd say. 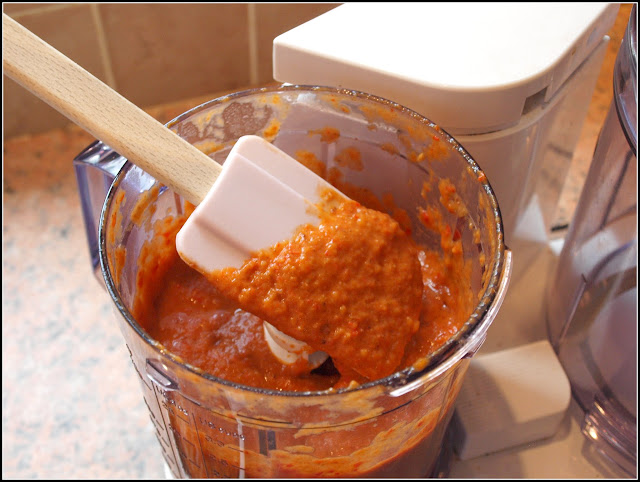 All that remained was to bottle the sauce. I used some recycled jars that had been thoroughly washed and then sterilised in the oven. 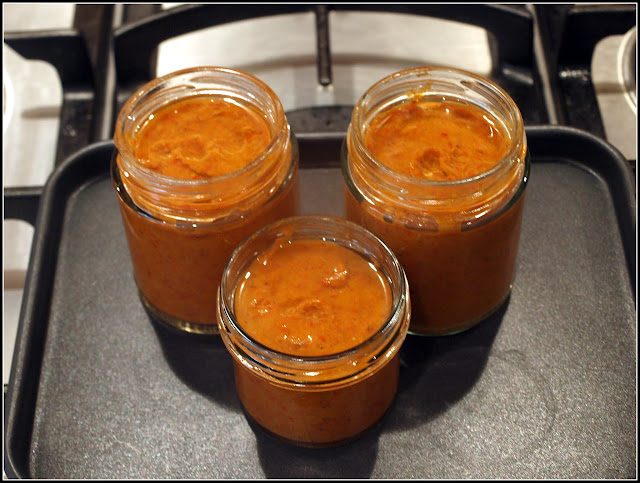 I left a bit of space at the top of each jar and added a thin layer of olive oil. This will help to keep the sauce fresh. Each time you use some of the sauce you pour off the oil before spooning out some sauce, and then you add some more oil to cover it afterwards (don't use your best Extra Virgin!). 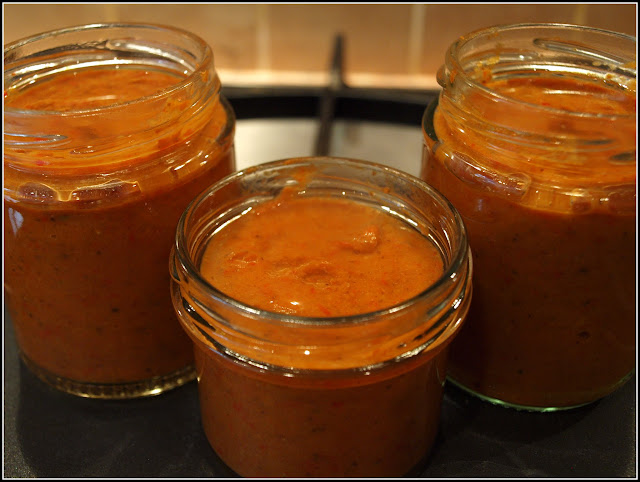 I'm not exactly sure how long sauce like this will keep. I'll be keeping it in the fridge and planning to use it within a few weeks. I sense that some North African-style meals are in the offing...
Posted by Mark Willis at 12:00