Regular readers will know that at about this time every year I do my best to improve the popularity of the much-maligned Endive - one of my favourite salad ingredients. So here we go then... 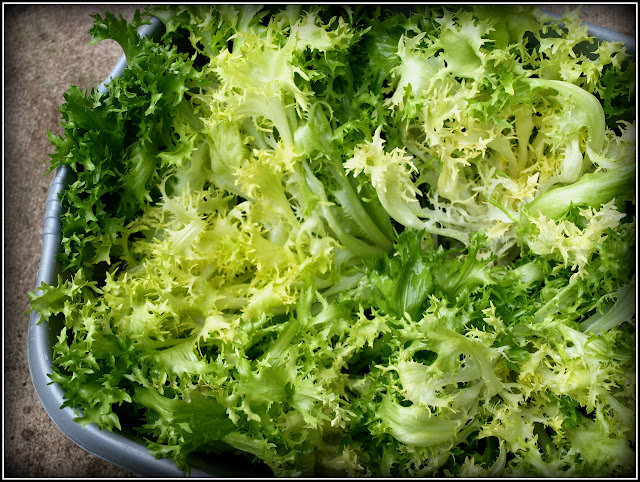 The Endive looks very much like a frizzy lettuce, but it is more closely related to the Chicory. In France, where Endive is very popular, they call it Chicorée Frisée and the stuff we call Chicory, or Witloof, or Belgian Endive (the crunchy pale pointed "chicons") is confusingly known as Endive! Anyway, does it really matter what we call it???

I could say that growing Endive is easy, just like growing Lettuce, but that hardly does it justice. Although the technique is the same, I have been growing Endive for many years and I have found this vegetable to be very temperamental indeed. It detests dry soil; it detests temperature fluctuations; it bolts at the slightest excuse. Although I try every year, I almost never have success with Endive in Spring or Summer. However, it seems to do well for me in the Autumn. Different varieties are recommended for Spring, Summer and Autumn cultivation and I have tried them all, with the same results!

For Autumn crops the seeds are sown in August and transplanted in amongst the other salads when big enough to handle easily (the two proper leaves stage). Here's a photo of my Salads bed in early October - it's mostly Endives now, with just a few Lettuces remaining. Notice the forest of sticks, intended to deter the furtling of nocturnal animals. I have to admit that they are of limited usefulness. 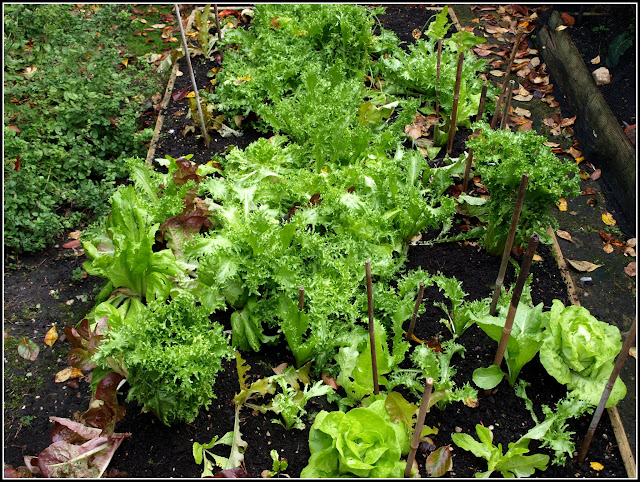 I suppose I should give the Endives more space, because they can grow quite big, spreading out in a big star shape, but I usually cram them in more densely than recommended. This tends to produce smaller plants, which suits our requirements very well. 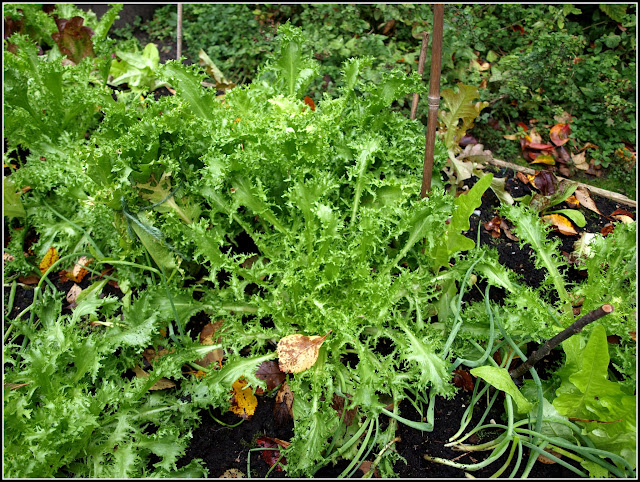 When the Endives are mature enough (assuming they haven't bolted!), I gather up the leaves and tie them quite tightly with a piece of soft string, like this... 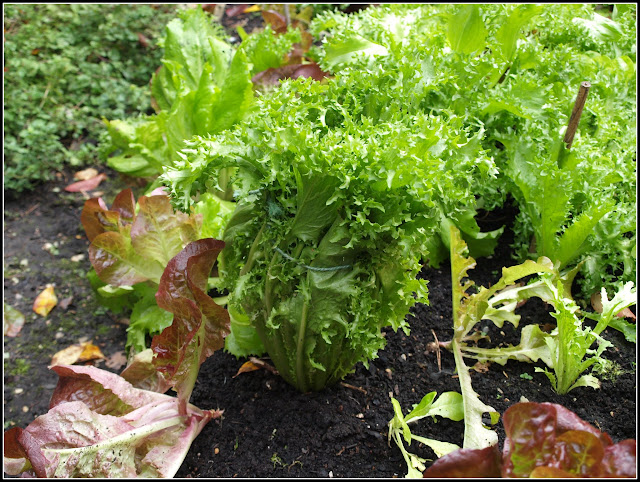 This will mean that light is excluded from the inner leaves, making them go pale and reducing their bitterness. I think the bitterness of Endives is often exaggerated. To be honest it's more of a prejudice than a fact. Many people who say "I don't like Endive because it's bitter" don't realise that they eat lots of it in mixed salads like the ones served in many restaurants and like the bags of mixed salads sold in supermarkets. They often think it is Lettuce!

After ten days or so, I remove the string from one of the tied Endives, just to see how they are doing. If it's not sufficiently blanched I tie it up again, but if it's OK I cut it. This one is ready for the kitchen: 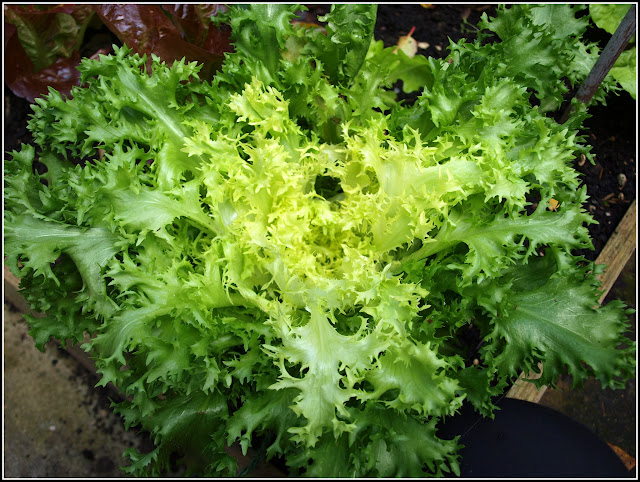 Since my plants are not huge, I generally cut more than one at a time. All the dark green outer leaves get discarded anyway, and you only use the nicest part in the centre of the plant. 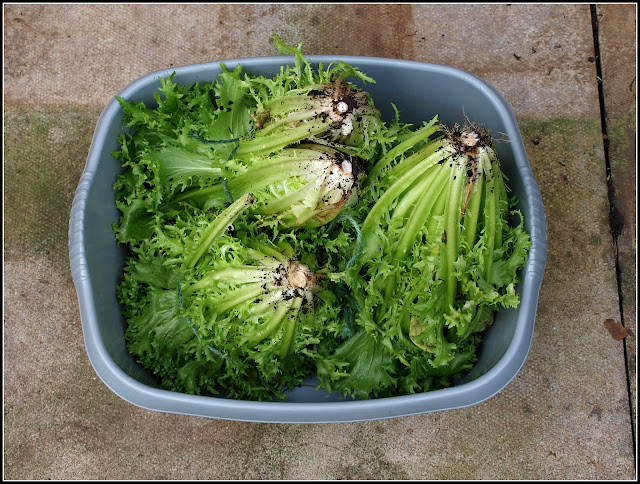 If the Endive is to be used straight away I separate it during washing into individual leaves, but if it is going to be kept for a while I leave the root intact. It just keeps better like that. In one of those green plastic "Stayfresh" bags it will keep in the fridge for at least two weeks. 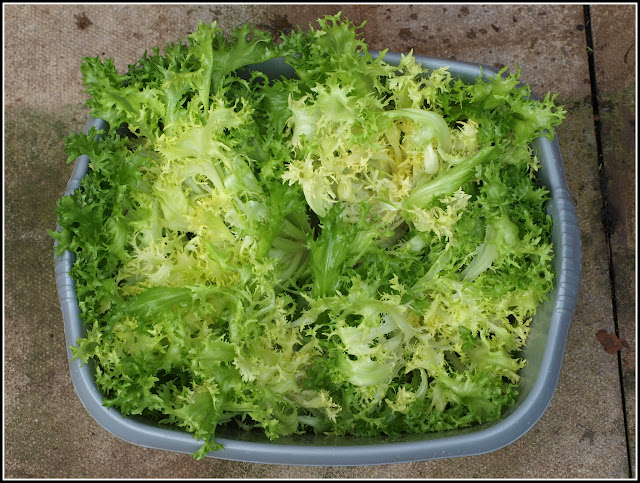 You use Endive exactly like you would use Lettuce. Our favourite way to enjoy it is with a tangy vinaigrette dressing, or maybe a blue cheese one. Jane is diabetic so we don't have sweet dressings, but another good dressing for Endive salad is a Honey and Mustard one. The sweetness of the honey would certainly counteract any bitterness. 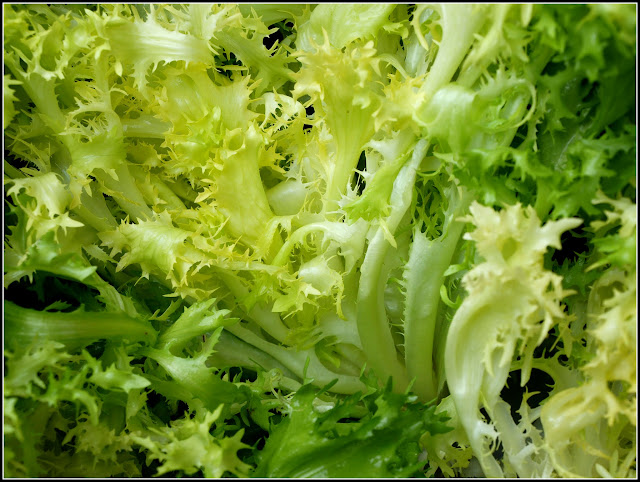 Some of the batch pictured in this post was served as an accompaniment to one of our favourite meals: roast Rack of Lamb, with Gratin Dauphinois and Endive Salad (plus a bottle of our own Domaine du Grand Mayne red wine!).

Endive seems to like the cool moist weather of Autumn, but it will not stand a heavy frost, so I'm intending to protect mine with cloches - which will of course protect not only from weather but also from animals.
Posted by Mark Willis at 12:00