As I mentioned a few days ago, Jane and I attended the "Challock Chilli Fest" at Stephen and Serena Shirley's Victoriana Nursery Gardens last Sunday.


Having been to the same event last year too we knew what to expect, so there were few surprises, but I didn't go for surprises, I went to see chillis!


The two-day festival is a celebration of all things chilli. Apart from being able to see at close quarters (and taste, if desired) Stephen's extensive collection of chillis, there was an array of food and craft stalls to be explored, all with at least some connection to the chilli, even if it was just a jewellery stall that had one or two chilli-themed ear-rings in amongst the other items, or a greetings card stall with some cards featuring the chilli. There was a Jamaican food stall offering curry, jerk chicken, Rice-and-peas etc; there was a coffee stall offering chilli flavoured beverages, and so on. Most of the stalls were ones belonging to small and mainly local businesses. It is nice to patronise such businesses rather than "giving" more money to the huge corporates that dominate our 21st Century world.


One of the stall-holders was Claire Burgess who I know via Twitter as @clairesallotment. She has written some children's books about growing vegetables, and she gives talks at schools aiming to get children involved in understanding where food comes from and what is involved in producing it. We bought one of her books for our granddaughters. They don't need any convincing about the merits of GYO, but I think they will enjoy the story anyway. It's called "Lottie and Dotty Sow Carrots".

The festival I'm describing is not a major affair. It doesn't draw in huge crowds. I don't know how many people attended last weekend, but I imagine it was probably hundreds rather than thousands. That suits me fine. I don't like enormous events. I like to be able to see what I want to see without jostling through crowds. I like to be able to park my car close by and not have to trek a mile from the car-park to the show. I like to be able to have a proper talk with stall-holders without feeling under pressure to move on. And in particularly I like being able to talk to a real expert on gardening, such as Stephen who hosted the show. I must also acknowledge that his charming wife Serena also knows a fair bit about chillis too! Furthermore we had the privilege of meeting Stephen's father Jerry, from whom he inherited the business (and presumably much of his horticultural expertise). Despite being in his 80th year, Jerry was happily digging up Parsnips in the vegetable garden, whilst telling us all about his impending operation (something to do with Arthritis I think...). It just goes to show that gardening keeps you young! By the way, the nursery doesn't just produce chillis, or indeed just veg. They offer a very wide range of plants of all types, like these enormous Dahlias: 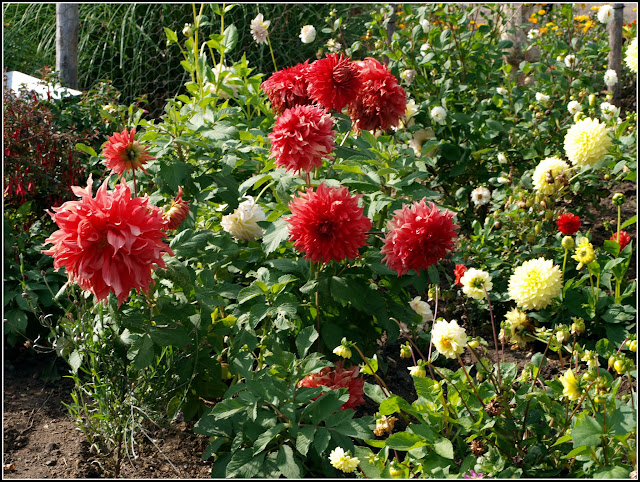 Yes we did buy a couple of things - Jane got a chilli-emblazoned scarf, and I got some chilli-flavoured chocolate, but the main event was definitely the close inspection of the chillis. To be honest with you, I only tasted one chilli variety, and that is currently nameless because it is one that Stephen has bred himself and it is not yet commercially available. Hopefully he will eventually start selling it because it looked and tasted wonderful. It was very fruity in flavour. Other people were enthusiastically tasting loads of chilli varieties. I should think there were well over a hundred varieties available to try. What I wanted however was the opportunity to see examples of chilli plants that I usually only get to see photos of.


Stephen grows his chillis in a polytunnel, and the benefits of doing so were abundantly clear. His plants were mostly about three times the size of my outdoor-grown specimens. The day we visited was a nice day, with plenty of sunshine, but bear in mind that it was October. The outdoor temperature was about 12 or 13 degrees Celsius, but inside the polytunnel it was hot and steamy like a tropical rainforest. I have decided that if I ever win a big prize on the National Lottery I will buy myself a polytunnel immediately!

Having seen so many chillis of different colours, shapes and sizes I have plenty of ideas for what I want to grow next year - though I probably won't have the space. Being there at the nursery, surrounded by so many lovely chilli plants is such a great source of inspiration. Growing chillis is a hugely addictive hobby!

I offer here for your delectation a selection of my photos. Enjoy!