You may perhaps recall that I have committed myself to growing more Autumn / Winter vegetables. With this in mind, I have got some leeks on the go. They are a variety called "Toledo", which is a late-season type, ready for harvesting between November and February. It is also claimed to be very hardy, and have good resistance to bolting. I have only grown Leeks once before, not very successfully, so I am trying hard to do better this time.

I originally sowed the seeds three to a pot on 1st March, and they germinated very well. They had grown to a size where I felt they needed to be transplanted and separated, and I also felt that the compost in which they were sown was probably exhausted. It had developed a rather unpleasant sticky black surface. 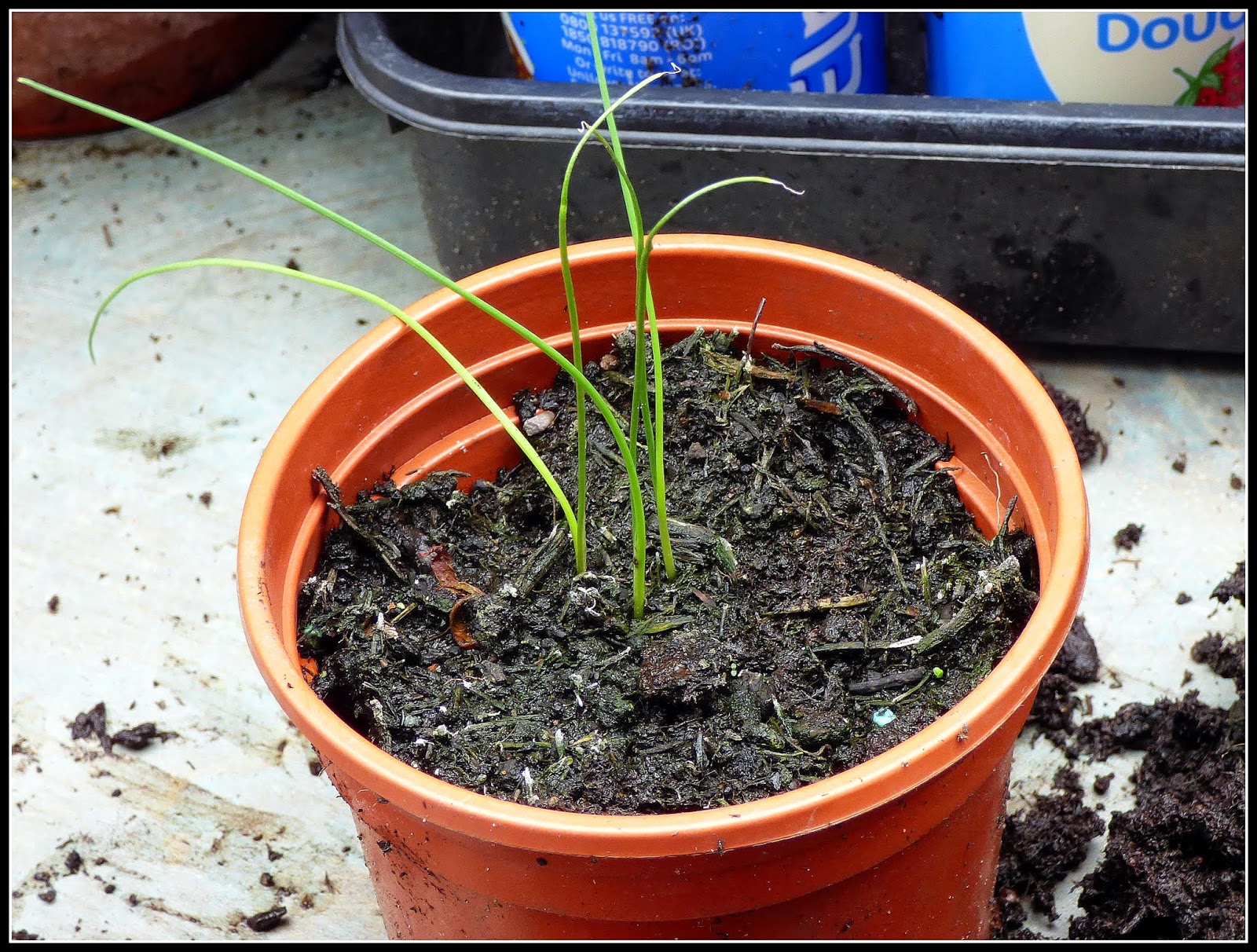 ﻿
I decided to put them into the tall Elmlea pots, recently vacated by the tomato plants. Having washed the pots thoroughly I filled them with fresh general-purpose compost. I then gently tipped out each pot of 3 leeks and separated them. Some of them had very long roots. 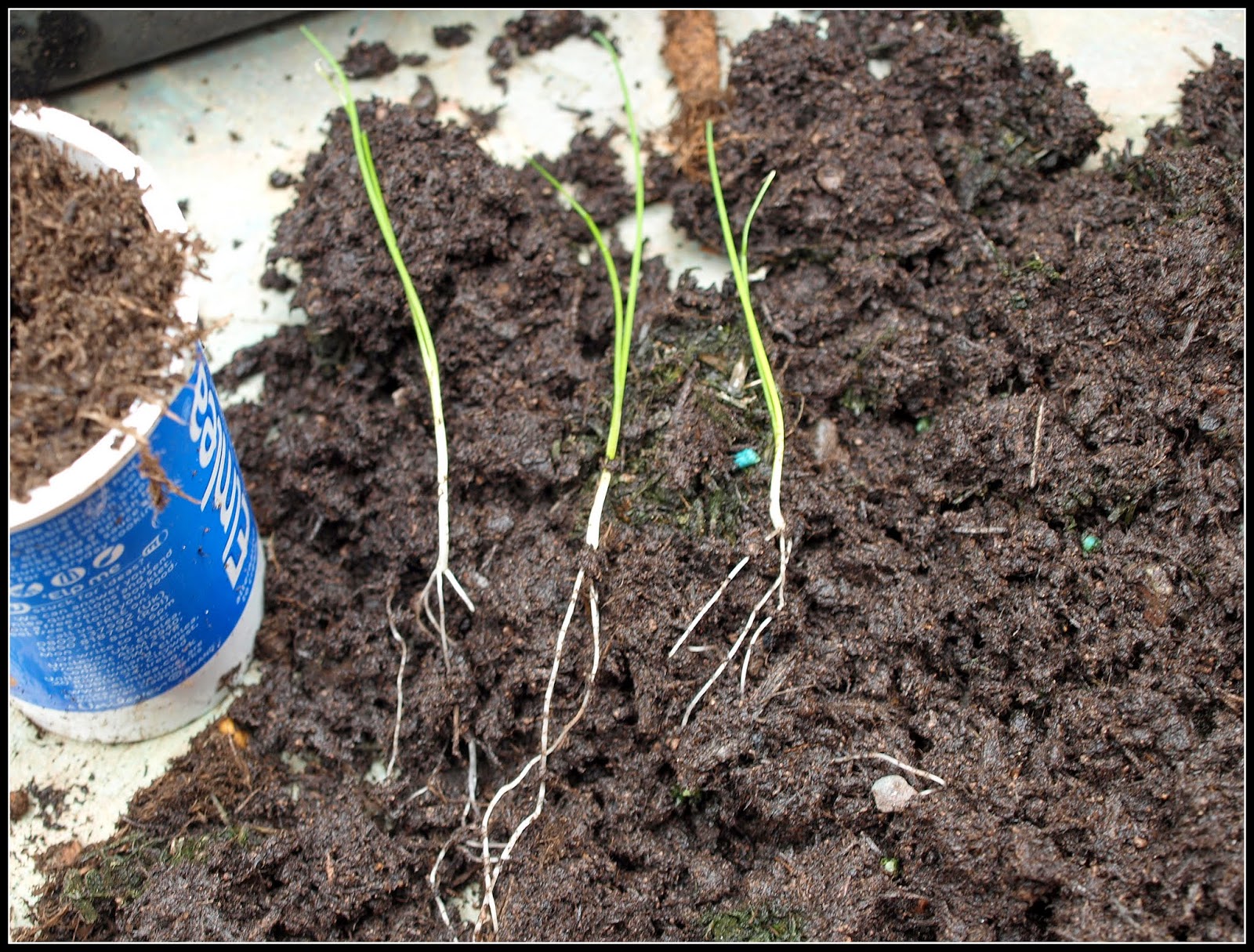 I used my home-made dibber (a 6" length of bamboo, sharp at one end and square at the other) to make a deep hole in the compost, and then slipped a leek seedling into the hole, carefully easing it into place with the dibber, before backfilling the hole with a little more compost. 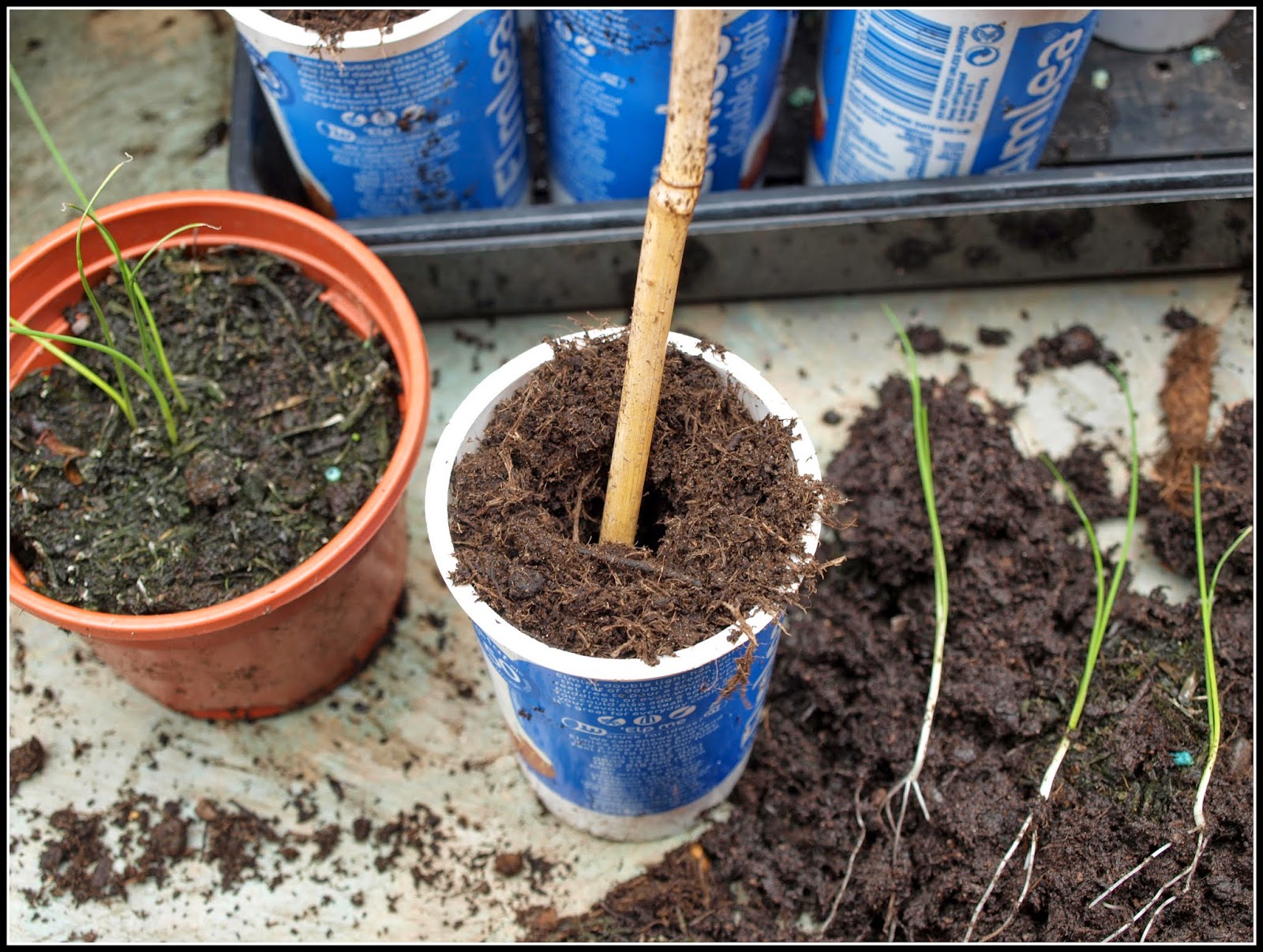 Each leek now has a place of its own, with lots of room to grow, as well as a good depth of compost into which to put their roots. When the job was complete I gave them all a good watering to settle them in. 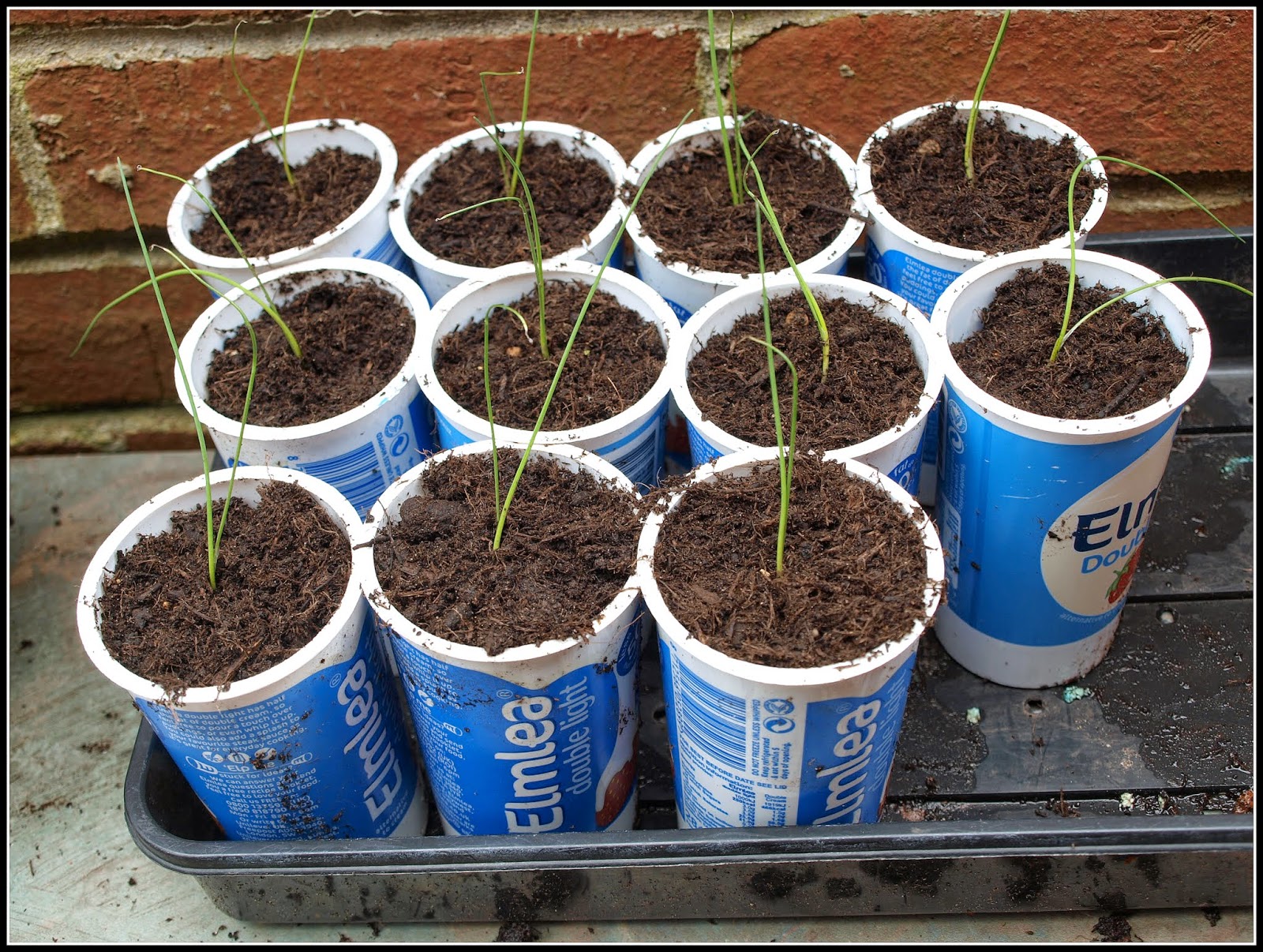 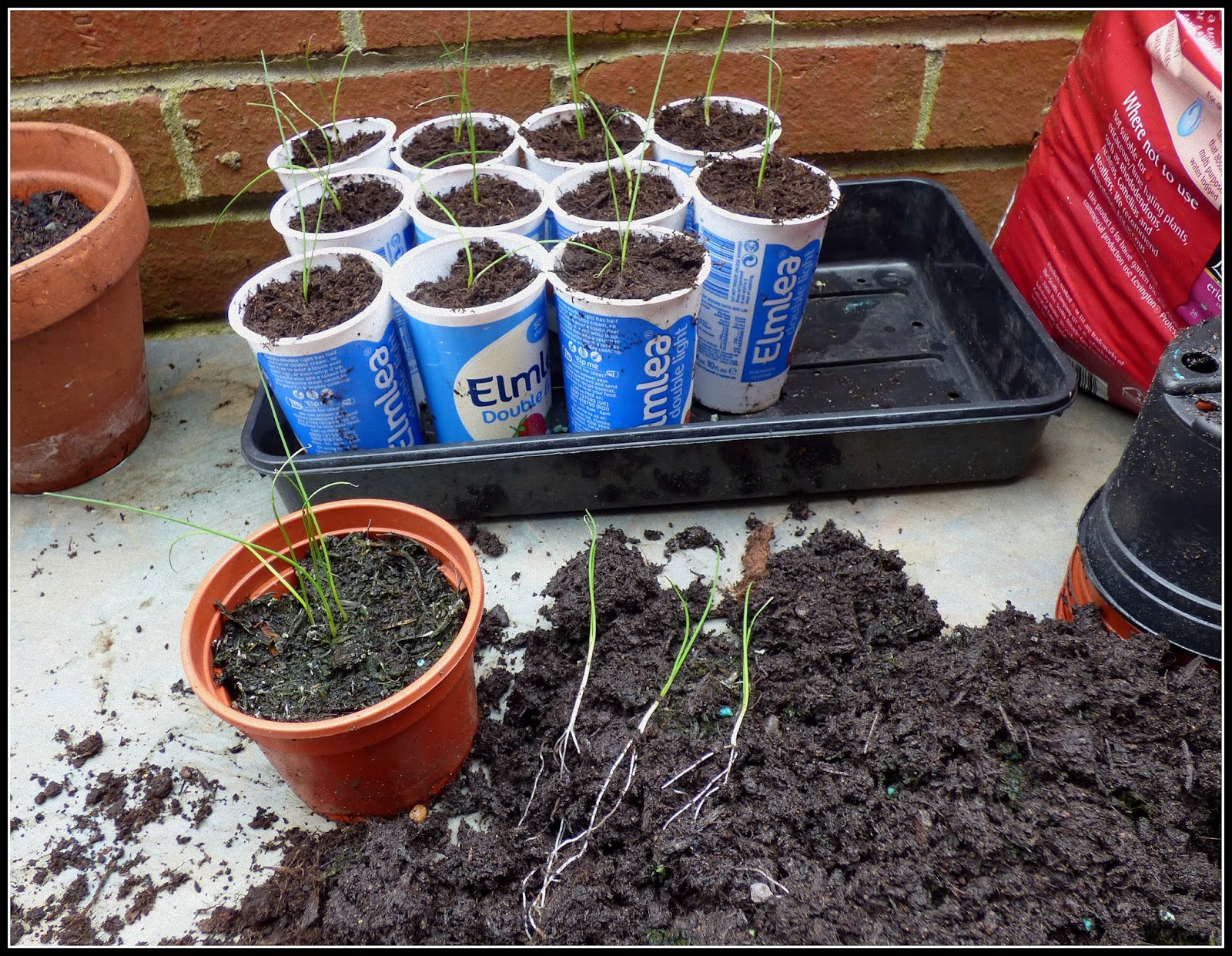 I originally sowed 3 seeds per pot in each of 12 pots, so I was a bit surprised to end up with 42 leeks instead of 36! There were a few very small leeks in amongst the others, so I suppose their seeds must have somehow slipped in un-noticed. ﻿This is the main batch (30): 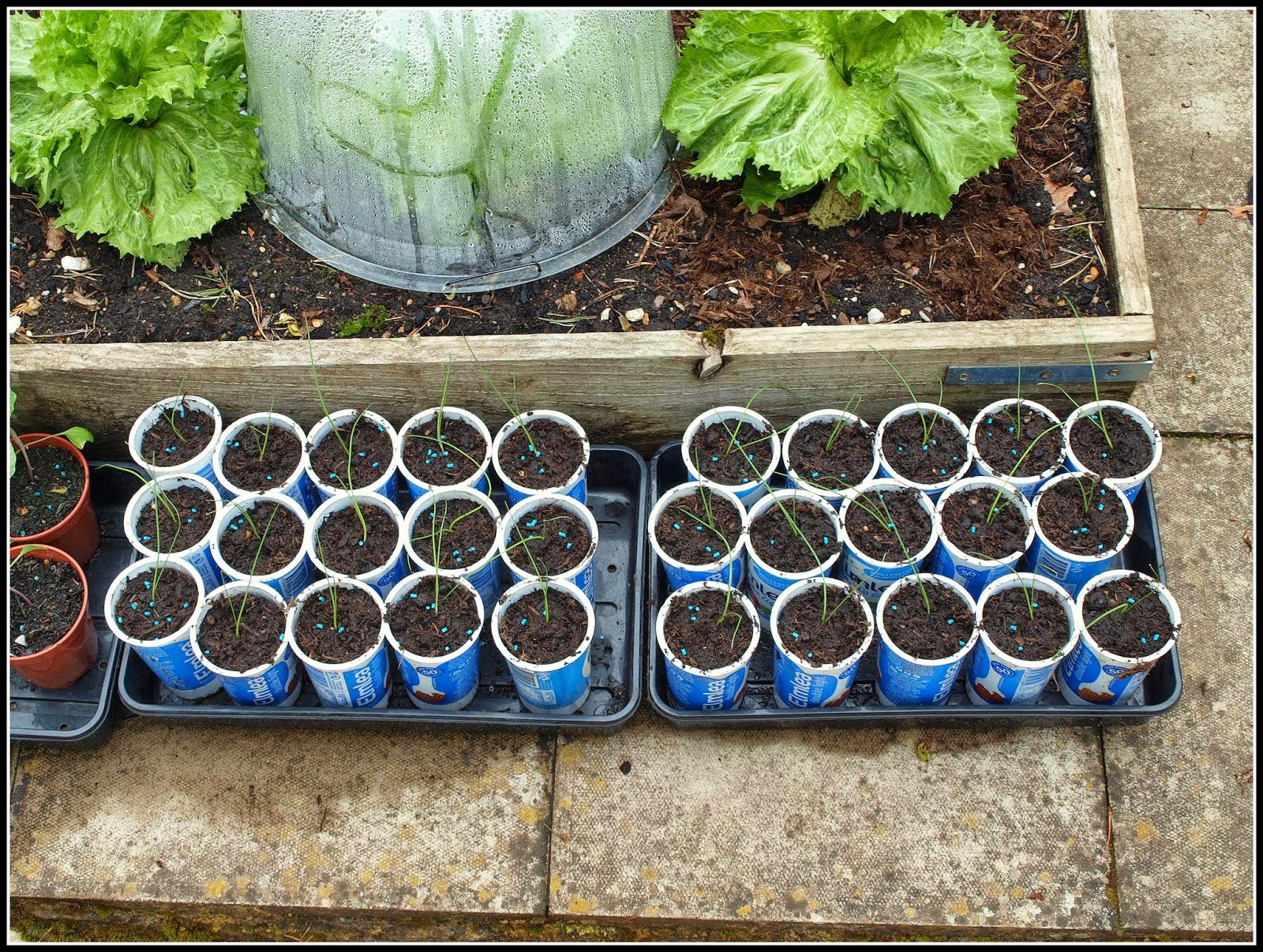 But being the person I am, I also kept the spares, even the four very tiny ones - just in case of casualties before planting-time!


So here they all are, lined up next to the Brassicas which are also waiting their turn: 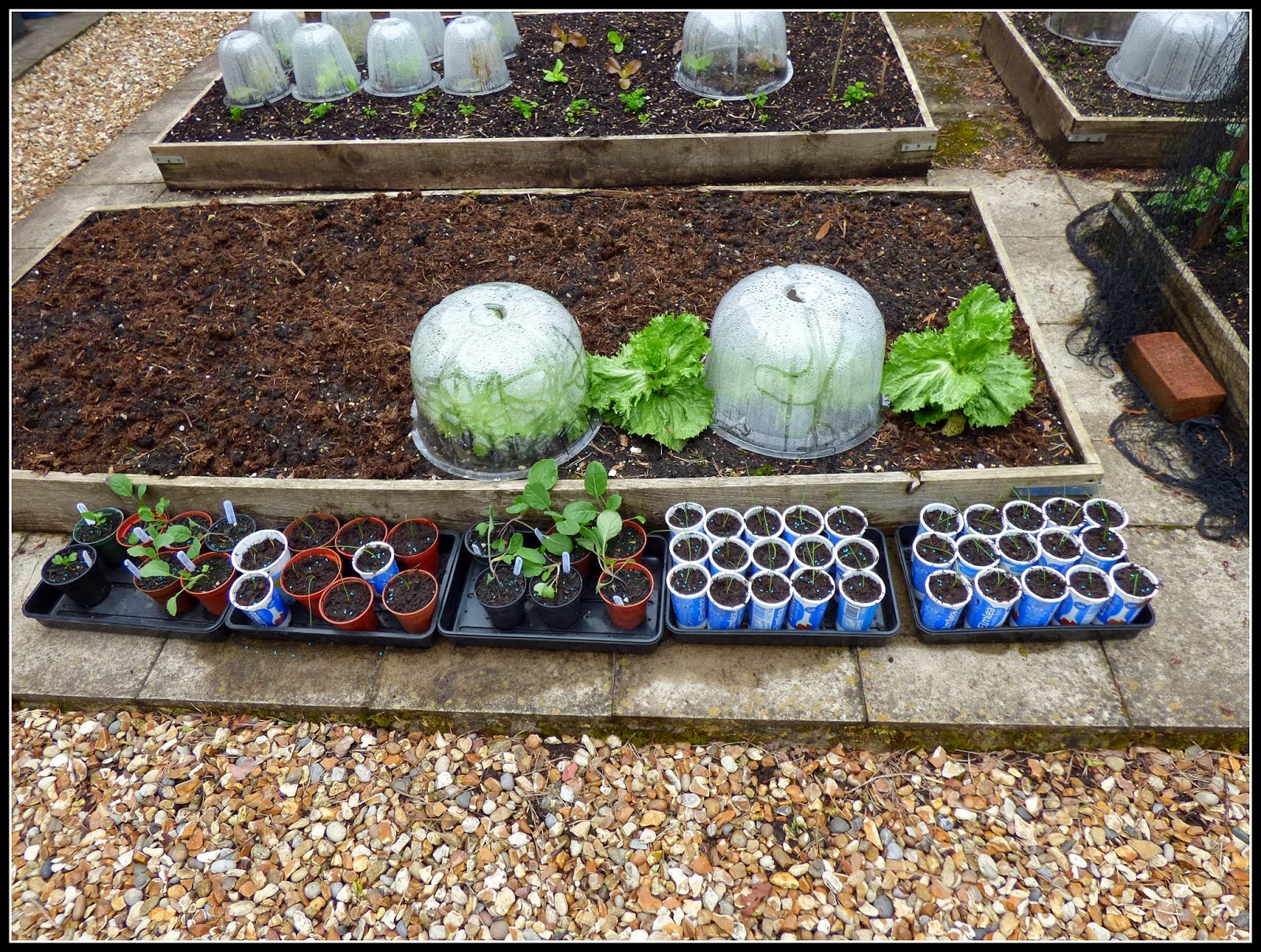 ﻿
Just behind the seedlings are the last of my over-wintered Endives, some of them under cloches, and in the background are the new season's lettuces (again, some protected by cloches).

I am going to leave the leeks to grow to approximately the size of a pencil before planting them into their final positions in one of the raised beds. I haven't yet decided exactly how many I will plant, but I don't think I'll have room for 42 of them! To do well, I imagine that leeks need to be about a foot apart. Is that right, do you think?