I haven't harvested anything significant from my garden this past week, so I'm not entering the Harvest Monday forum this time, and I want instead to describe the meal I cooked on Saturday evening.

Regular readers of my blog know that we eat a very varied diet, with meals from any number of different cuisines. This time when it was my turn to cook I decided to do a Mexican-style meal. I say "Mexican-style", because it's probably not very authentic, and the purists would probably dismiss it, but to me it is near enough Mexican to qualify!


My meal was this:
Spicy slow-cooked pork with corn tortillas, guacamole, tomato and chilli salsa, shredded lettuce, and spring onions.

It starts with a piece of meat. I bought a 685g pork shoulder roasting joint, complete with skin for crackling. At £2.73 I thought this was excellent value. The first step was to marinate the meat in a spicy rub. It doesn't look very pretty in the photo, but just imagine what is smelled like. For the marinade I used crushed Garlic, grated fresh Ginger, Chilli flakes, Chipotle powder, Fennel seeds, Ground cloves, Ground Allspice, Ground Cinnamon, and some All Purpose Seasoning, and I moistened the mixture with a little vegetable oil so that it would stick to the meat.


After the meat had had about an hour or so in the marinade, I softened some onions in a big pan, put the meat on top and added about a litre of beef stock, along with all the marinade. Then it went into the oven with the lid on for four hours on a low heat. I checked it once or twice, turning the meat over and basting it with the liquid, but not adding any more water or stock. Over the four hours cooking time the meat became very tender and the "gravy" reduced to a sticky sauce. It is important not to let the dish dry out!

﻿The final part of the process with the meat was to remove and discard the skin (shame about the absence of crackling, eh?) and then shred the pork into small pieces, using two forks. I then mixed it thoroughly into the remaining sauce and returned it to the oven to keep warm.

Earlier I had made the tomato and chilli salsa, using an appropriate receptacle for it: 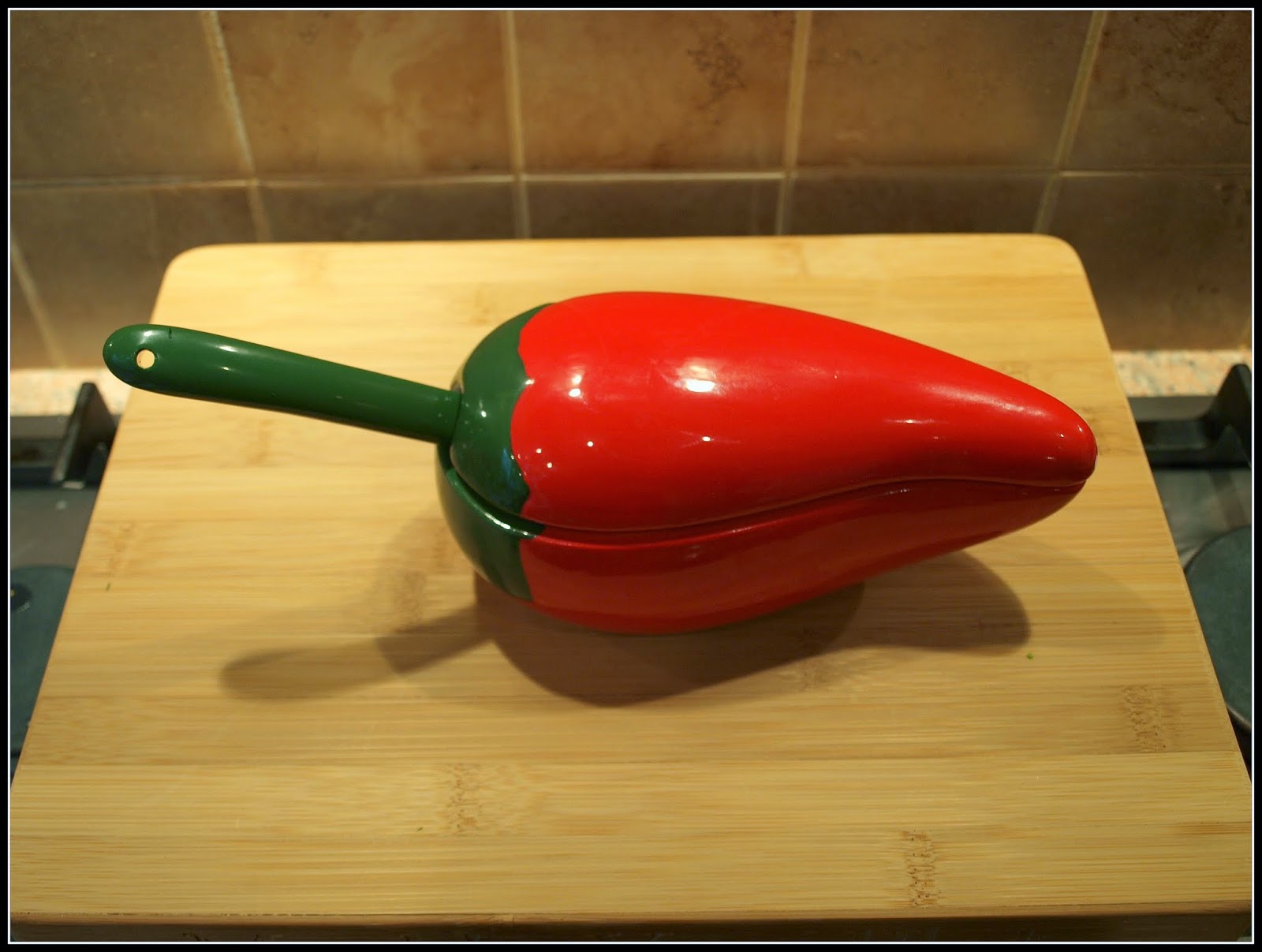 Isn't that a fun dish? The salsa inside was made with chopped tomatoes (seeds removed), finely chopped yellow "Aji Limon" chilli (seeds also removed) and loads of Parsley. To be authentic, I know I should have used Coriander, but that makes me ill, so Parsley it had to be. The garnish on top is actually a couple of Leaf Celery leaves - which conveniently look very like Coriander.


I also prepared some shredded crunchy Romaine lettuce and some chopped spring onions, but they are not particularly photogenic so no photos of them! Shortly before serving time I made some guacamole. Mine was made simply with avocado, lots of lime juice and a small amount of salt, all zuzzed up in the food-processor. I served it in an authentically-Mexican hand-made dish, which we bought some years ago on the day we explored the Mayan ruins at Tulum. This is very much the sort of souvenir we buy when on holiday, because using it really does help us to remember the good times we had all those years ago.

Then finally the "piece de resistance" - the tortillas. I don't have much experience of making these, but I'm a quick learner with this type of thing. [Note to self: practice makes perfect. Make them more often!]. I used the tortilla-press that we bought some years ago (in Vancouver, of all places!):


After some experimatation I have decided that (in the absence of authentic Masa), the best sort of dough for making tortillas is made with a 50:50 mix of fine polenta (cornmeal) and ordinary plain flour, moistened to the right texture with water. The technique is then to form the dough into small balls (perhaps a bit smaller than a golf ball) and squash them flat in the tortilla-press, between two plastic bags. I found the most difficult part of the proceedings was to persuade the dough not to stick to the plastic bags. I tried greasing them with a squirt of PAM non-stick cooking spray, but got better results with a dusting of flour.

Then I cooked the tortillas on the thing we call a "Tava" (this is the name used in India. The Mexicans would call it a "Comal".) Basically it is a heavy disc of cast iron that is laid directly on top of a gas ring. It gets very hot, and maintains a very even heat. A tortilla cooks on one in about a minute. Mid-way through cooking you flip the tortilla over and cook the other side - aiming to achieve a nice "blistered" effect.


I cooked about a dozen of these tortillas, keeping them warm in a dish covered with a tea-towel, in a very low oven. This is necessary because it is only practical to cook one tortilla at a time!

Anyway, at this point the various elements of the meal were all ready, and it was just a case of assembling them all. We ate our meal from trays, in front of the TV. I served the pork and some tortillas on a dinner-plate with a selection of the other items in a bowl alongside, which allowed us to assemble the filled tortillas as desired.

I was pleased with the result. The pork was very tender indeed. It had a warm but not searingly-hot chilli tingle and a deep mellow flavour from all the spices. The tortillas came out well too. They had a firmer texture than commerical ones, which I often find to be unappetisingly flaccid, and the polenta gave them a good flavour too. The sign of success here was the fact that none of the tortillas got thrown away. Sometimes when you're making pancakes the first one doesn't turn out right - possibly because the pan is not really hot enough - and I had half expected this to happen with my tortillas. But No, they were all fine, and we ate the lot!
Posted by Mark Willis at 12:00