Some of you might think that it's only posh gourmet food that we eat in the Willis household. You'd be wrong though. Although we do like to eat well, many of the everyday meals never feature on our blogs - which is why I thought I would give a bit of visibility to a couple of meals I recently made, which don't really warrant a blogpost of their own, or a recipe. 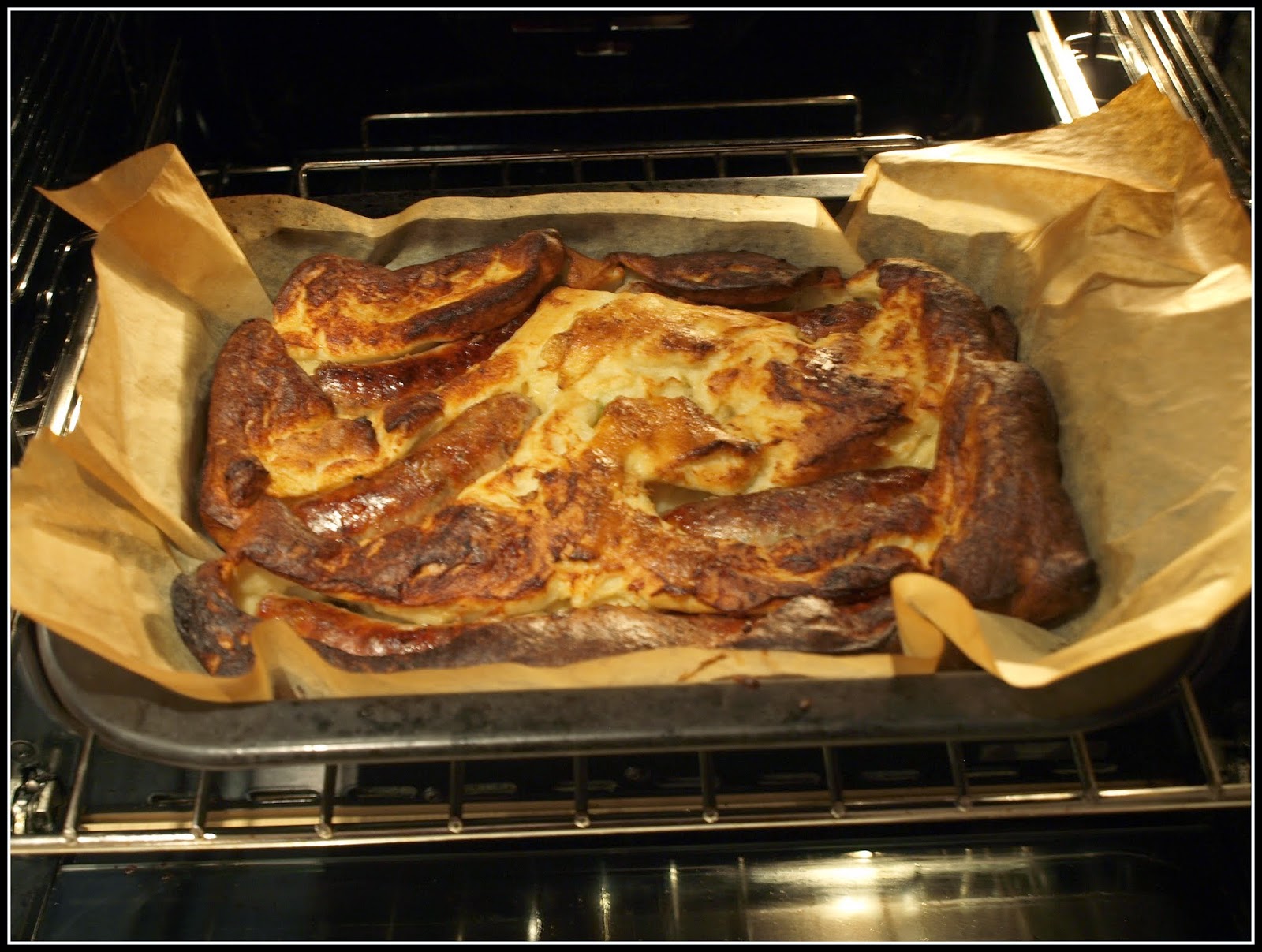 This is what we Brits call "Toad in the Hole", but this one is actually its French cousin "Crapaud dans le Trou", because it is made with Toulouse sausages, which contain a lot of garlic. The batter is the same as that used in Yorkshire Pudding. Since this is the first time I had made this dish I foolishly thought it would be much the same as making Yorkshire Puddings, but it took MUCH longer to cook, and to be honest, the centre was still a bit under-done by the time the edges began to go very dark. I think it would have been wiser to cook it longer at a lower temperature, or perhaps use a bigger pan so that the batter is thinner. Hey Ho, this is the sort of thing that you learn through experience!

To add yet more garlickyness to the dish, I served it with new potatoes slathered in home-made Wild Garlic Pesto. I didn't take a photo of the salad I served alongside the hot food. Guess what was in the salad dressing? Garlic? No, it was shallots this time - and mustard, as well as the usual oil and vinegar. 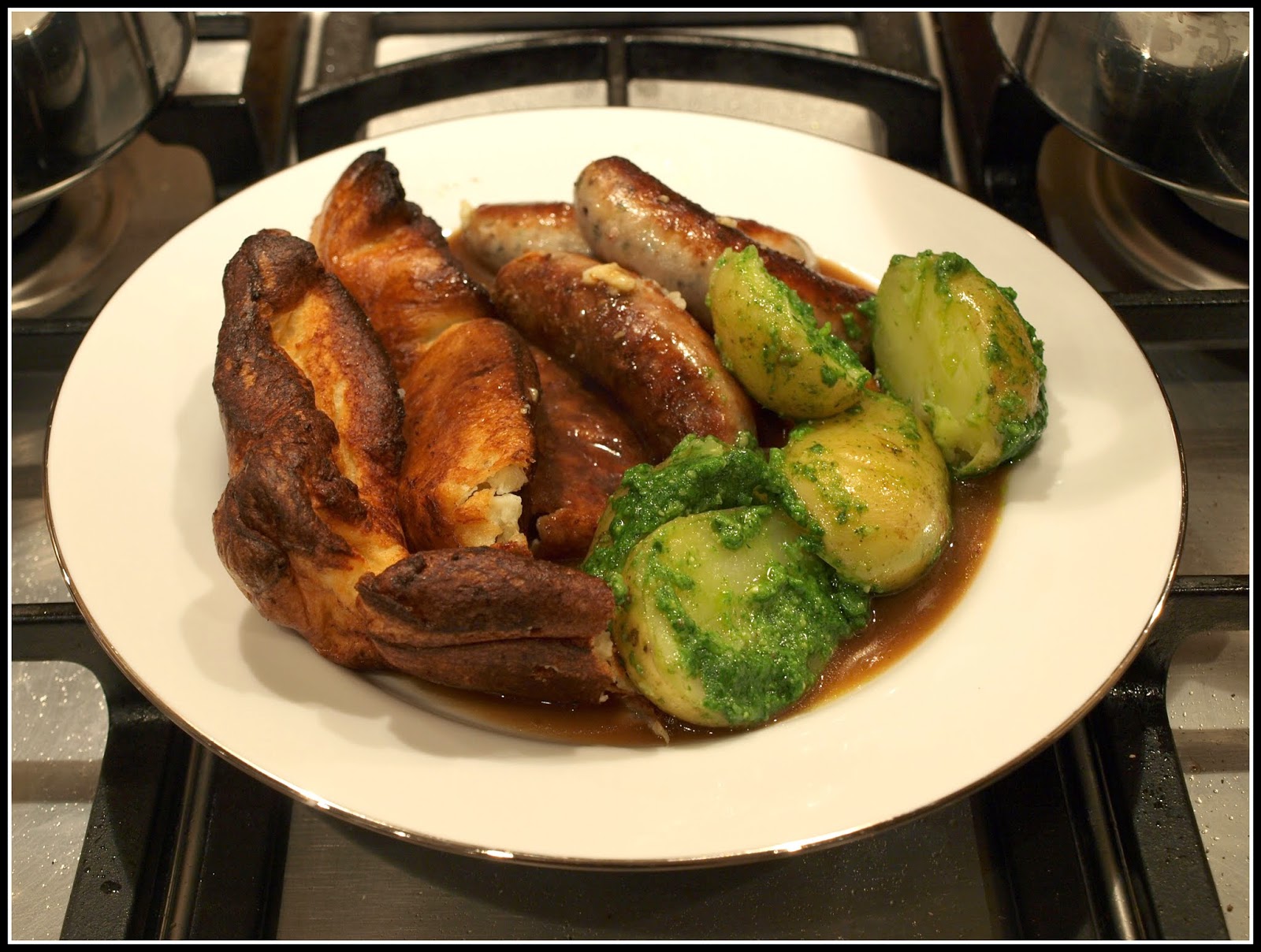 I loved it, but Jane found the pesto a bit overpowering. The Wild Garlic in the pesto is raw, and I think it would be a bit milder when cooked.

﻿
My second dish is this braised steak with potatoes, asparagus and PSB: 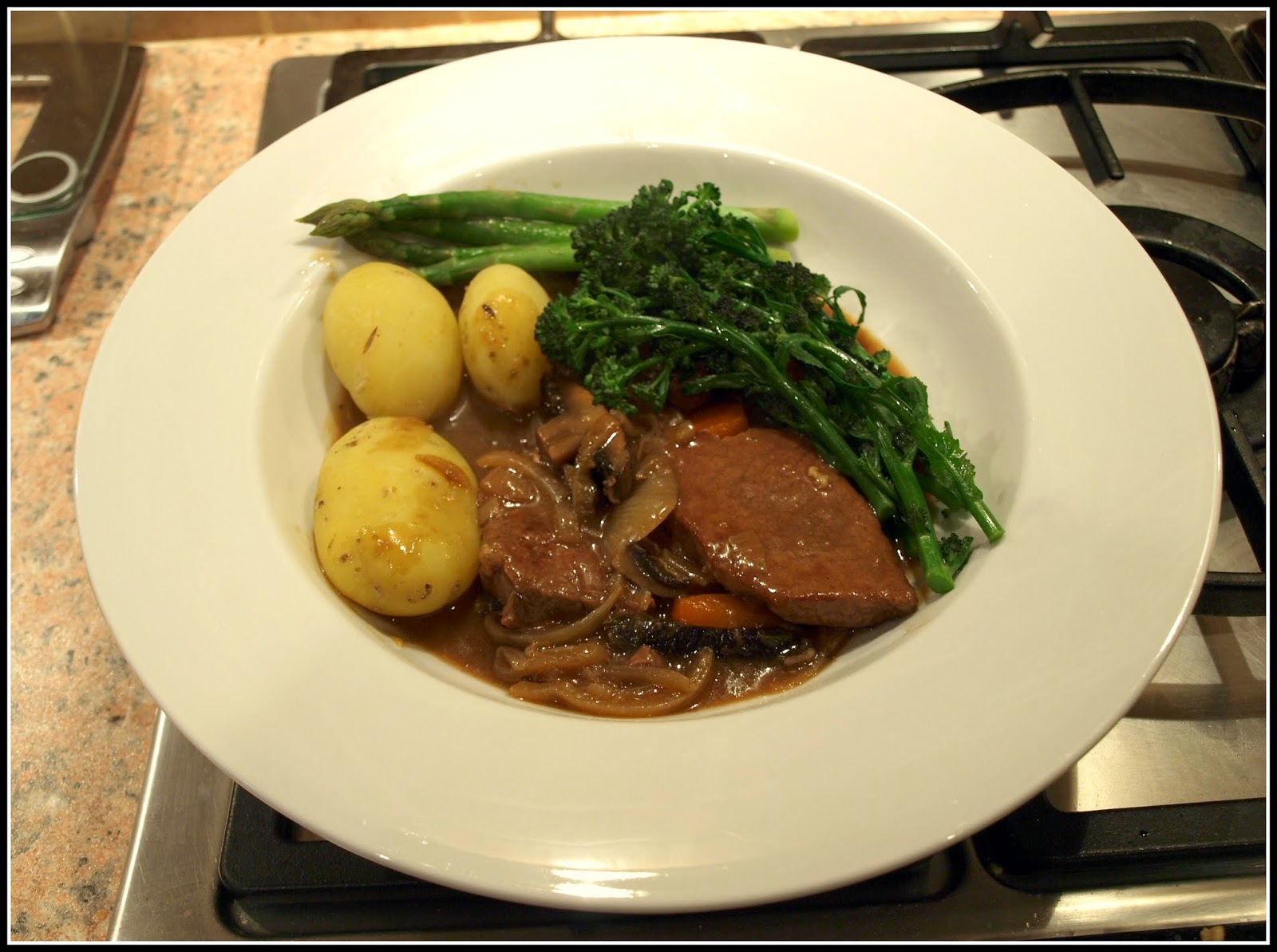 This is very much the sort of thing I like, and I cook in this style very frequently. The meat is cooked long and slow (about 3 hours at 150C), so that it goes very tender. I always make sure there is plenty of gravy. In this case it is enhanced with the addition of onions, mushrooms and carrots, as well as fresh Thyme. 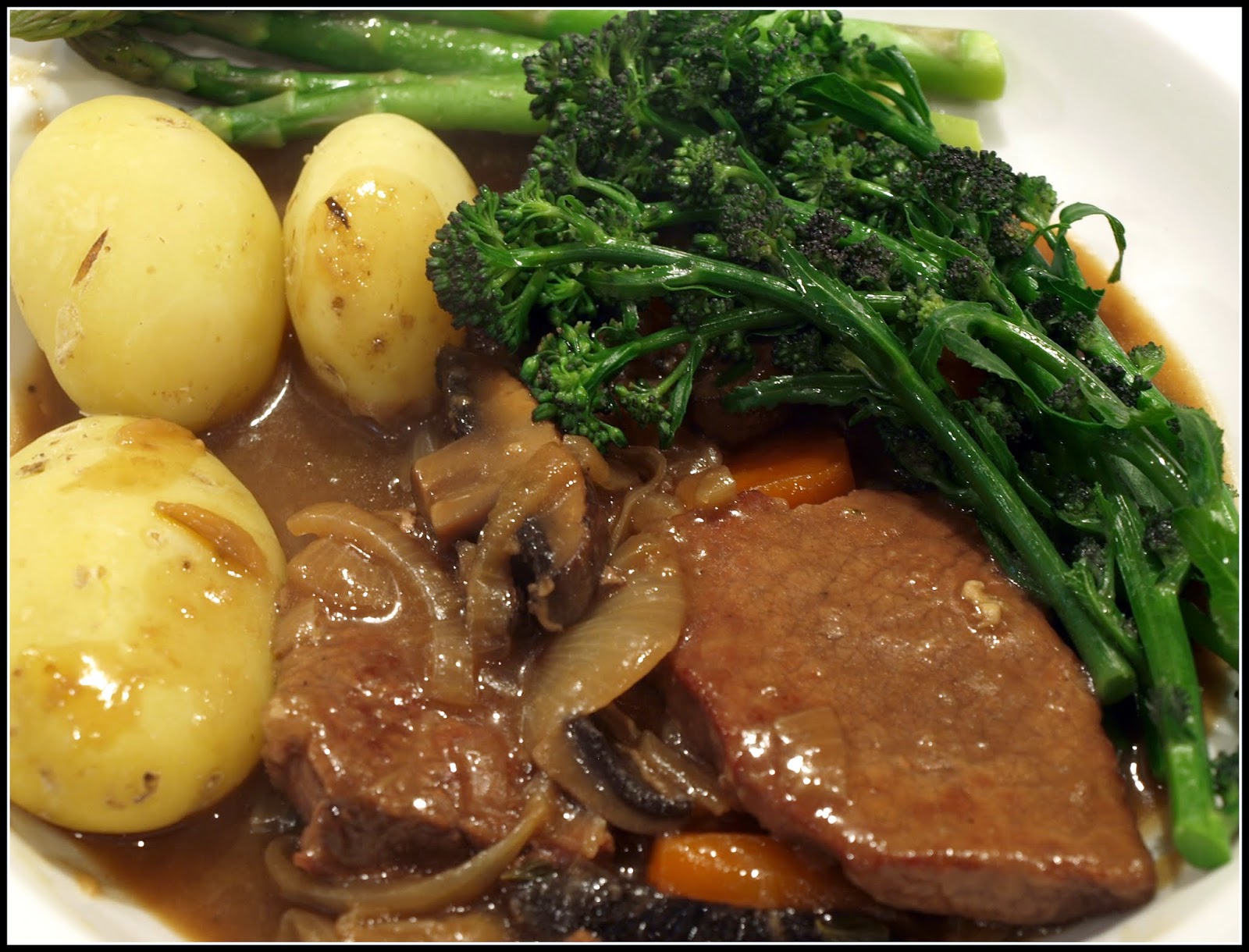 The Asparagus and Purple Sprouting Broccoli are from my garden. I wish I could say the same about the potatoes, but it's a bit too early in the year for that. The potatoes were the type generally known as Jersey Royals (aka International Kidney). They were evidently dead fresh as the skins rubbed off very easily.


Now here are a couple of photos of meals that Jane prepared just recently:

Lasagne - and old favourite! Normally served with a green salad. This is a good weekday meal, since it can be prepared in advance and easily finished off at dinner-time. 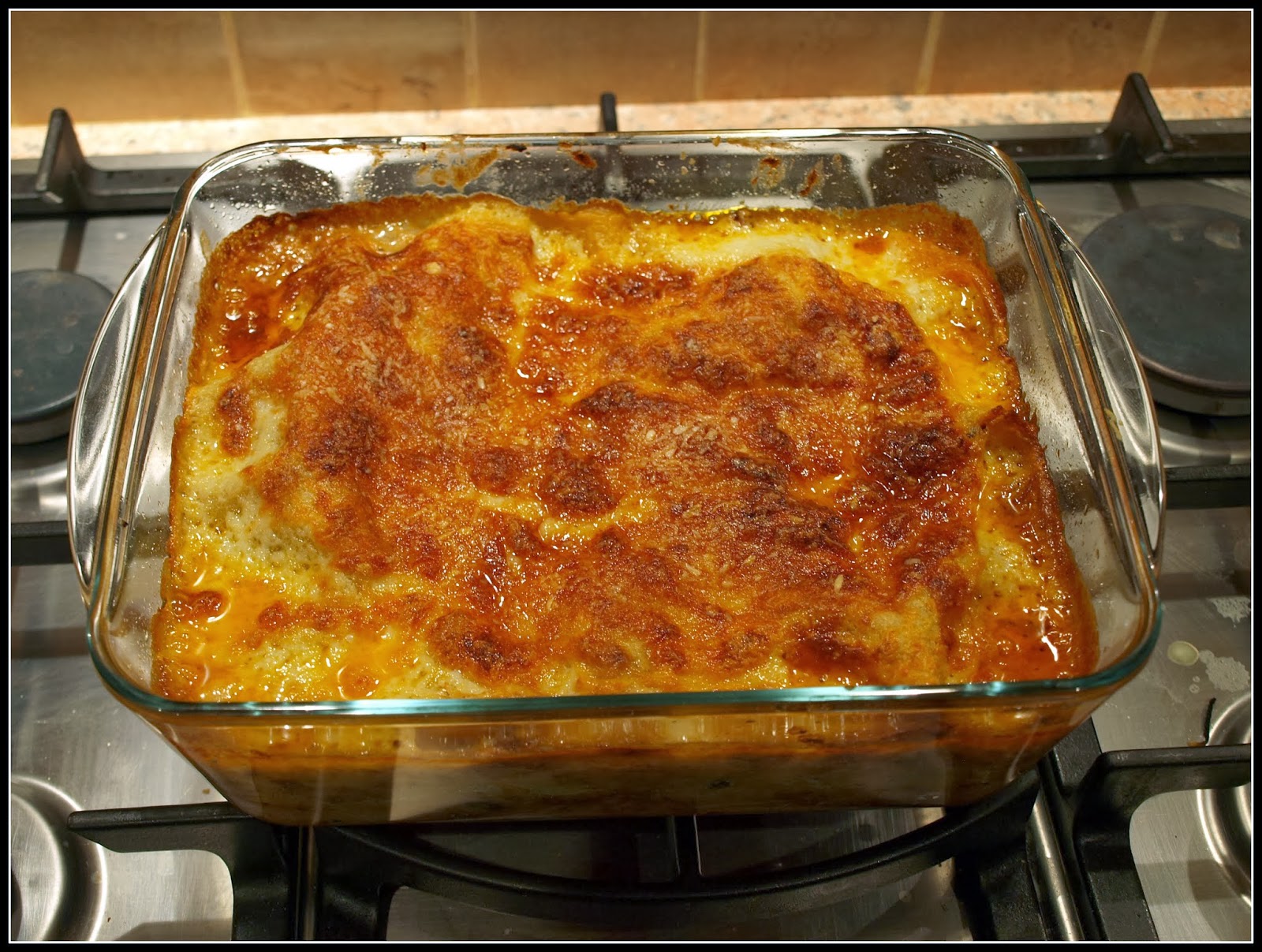 Jane puts smoked bacon lardons in with the beef for the meat sauce, which makes it particularly tasty.

Then there was this Cobb Salad (you may have seen this photo before, Jane posted about this on her blog Onions and Paper.) 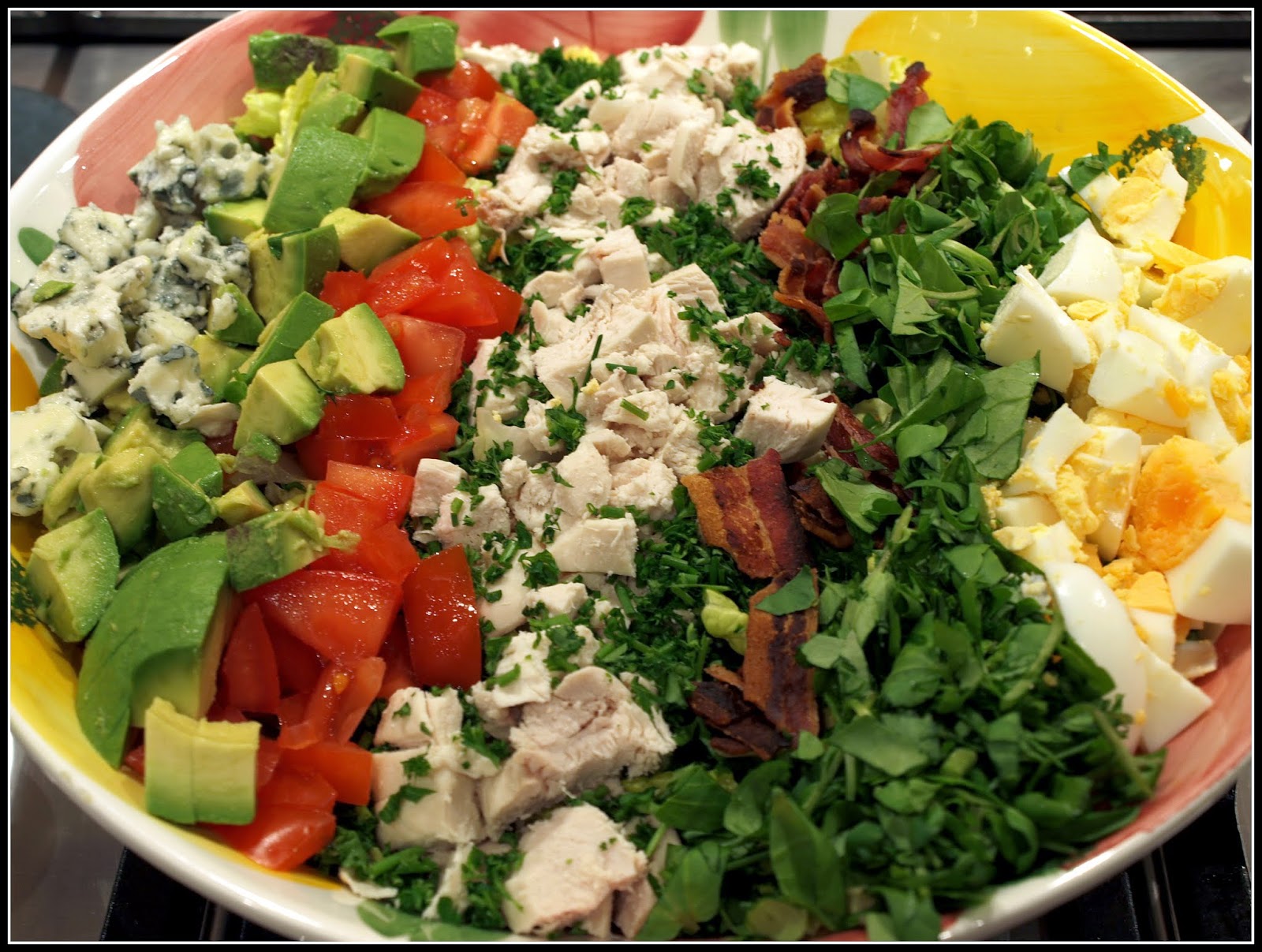 The concept of the Cobb Salad is that the ingredients are chopped up small. I'm not sure whether there is an official list of authentic ingredients, but here Jane has used eggs, watercress, crispy bacon, poached chicken, parsley, chives, tomatoes, avocadoes and Roquefort cheese. Somewhere underneath that lot there was a load of Romaine lettuce too. I can tell you that this salad was amazingly tasty, especially since it was served with a nice tangy dressing using rather more vinegar than normal.

So there you go: that's the sort of food we eat most often. Not fancy, but blooming good. Our view is that since you have to eat, you might as well enjoy doing so!
Posted by Mark Willis at 16:00