Yesterday I had a go at making Ciabatta. This is something I have not done before. 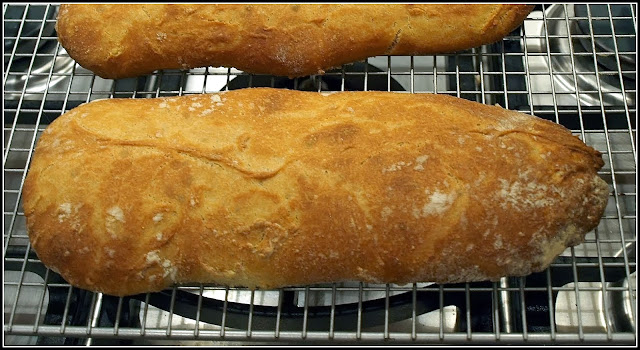 Having mastered the art of baking a simple white Bloomer, thanks to Paul Hollywood's book "Bread", I have been feeling the need to move on to something a bit more ambitious. Jane was cooking a Lasagne for dinner, so I thought Ciabatta would be the perfect accompaniment. The challenge was on!

So, out with Hollywood's book again... I read the instructions through, several times over. They sounded reasonably straightforward, though Jane (who has done these things before) did warn me that Ciabatta is "quite tricky"...

Paul Hollywood's recipe calls for half of the flour, yeast and water to be mixed up into a batter and left to stand for 6 hours before the remaining ingredients are used, and then there is an additional 135 minutes' rising time later on, so this is not a bread to make when you are in a hurry! The reason that some of the ingredients are made into a batter (Hollywood calls it a "sponge") and left to ferment is to add flavour, and I can say with the benefit of hindsight that this was indeed a really tasty bread.

After the batter has had its 6 hours you then put it and the rest of the ingredients into a food-mixer and mix then all up until you have a nice stringy elastic dough. Hollywood says to give it 10-15 minutes in the mixer, but our food-processor doesn't have a really slow "kneading" setting, so I gave it about 6-7 minutes. When the dough reaches the right point (it should be able to stretch 30cm without breaking), it is put in an oiled, lidded plastic container and allowed to rise for another two hours. Then the tricky bit... (No photos of this, because my hands were well and truly full. And sticky).

The risen dough (about 10cm thick) is tipped out onto a floured surface (50% flour, 50% polenta) and divided into two long thin pieces, which are stretched even further to make the characteristic Ciabatta-shaped loaf. Well, that's the theory anyway. The dough is very wet and sticky, and I found it very hard to shape. In the end I managed to get an approximation of two Ciabatta loaves onto a floured baking tray and put them inside a big plastic bag to preserve humidity during their final rising (15 minutes). During this time the oven is heated to 220C.


Then into the oven to bake... 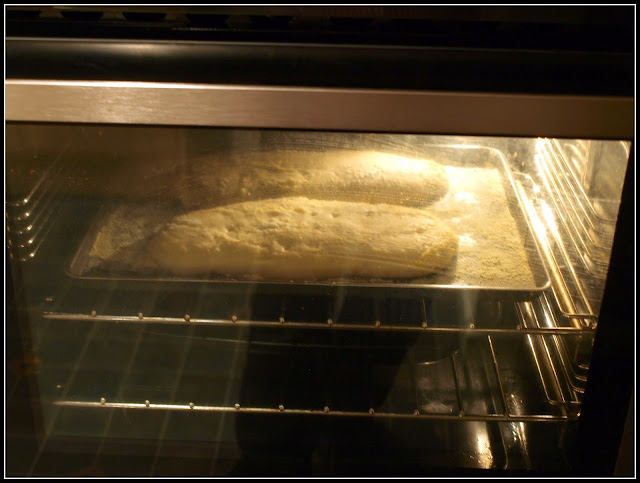 The recipe says 30 minutes, but mine were ready in not much over 20. I think this is because they were flatter than desirable. I'm sure this is due to the dough being a bit wetter (and hence more mobile) than it should have been. ﻿I turned mine over for the last 5 minutes, to brown the undersides too - we like bread "Well Done". This is the end result: 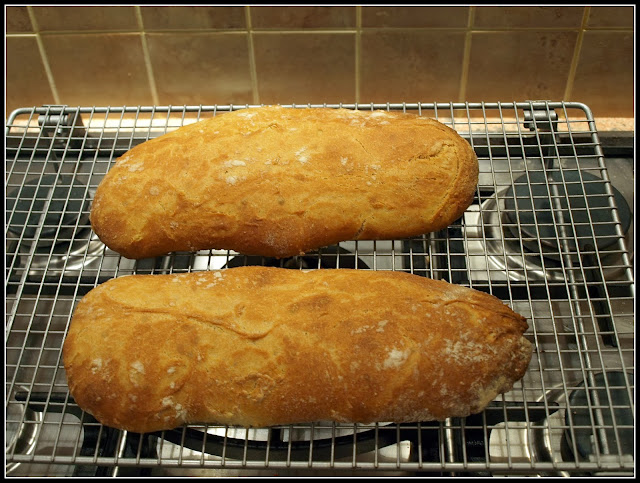 The nearest one doesn't look too bad, though the furthest one is a bit wonky. Still, as they say "the proof of the pudding is in the eating", so as soon as the bread was cool enough to do so, we had a little taste: 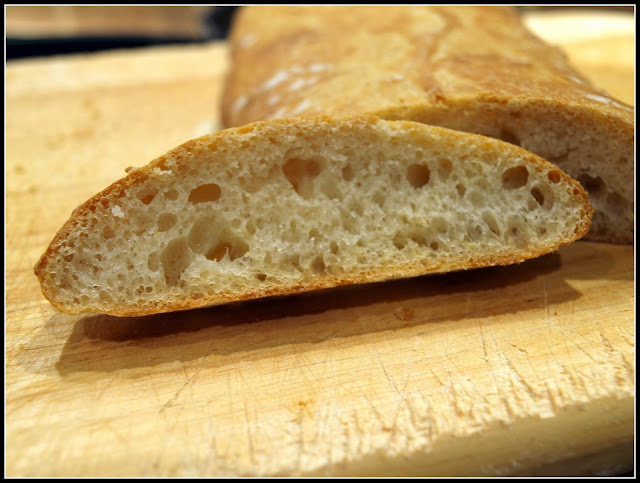 The taste was very good - full of flavour - and the texture was better than I had dared to hope. The classic Ciabatta has lots of big holes in it, caused by the air-bubbles in the dough, so I reckon mine probably scored about 7 out of 10 in this respect. I was also proud of the crust. Despite the deep golden colour it was crispy but not hard. This is something that is improved by putting a roasting-dish full of boiling water in the bottom of the oven (as I did ) to create steam during the cooking.﻿

I expect Paul Hollywood would find plenty to criticise in my results, but all in all, I am well satisfied. The main thing is we enjoyed eating the bread. I am also happy that my bread-baking repertoire has now officially expanded by 100%!
Posted by Mark Willis at 09:00