Whenever Yorkshire Pudding is mentioned most people assume that it will be served as an accompaniment to roast beef. This is not always the case! I want to demonstrate here that it can be used as the basis for a much less formal meal.

I would like to say straight away that my Yorkshire Pudding is made from the recipe in Hugh Fearnley-Whittingstall's book "The River Cottage Meat book" (p517). Hugh in turn credits David Wallington for this recipe, but whoever owns it, it works brilliantly! The basis of Yorkshire pudding is a batter made with flour, eggs, milk, water and salt. I prepared my batter several hours in advance and left it to stand in the fridge. Just before using it I whisked it with a balloon whisk, just to get some air into it, which I think helps it to rise well. 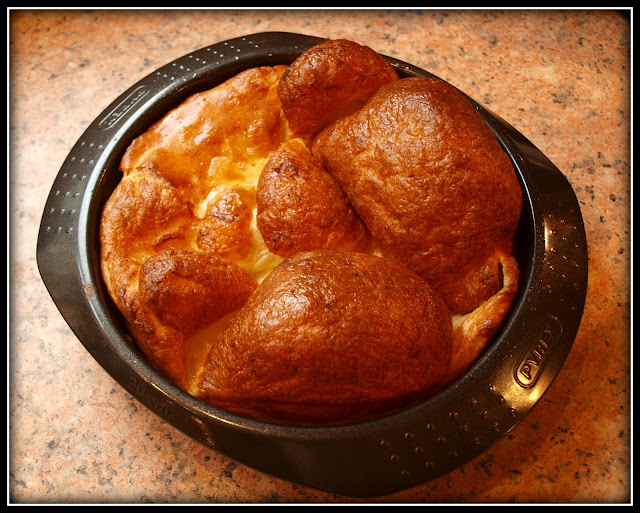 On this occasion I wanted to use the Yorkshire Puddings to hold other ingredients of our meal, so I made them in two large containers rather than in the small muffin-tins in which we normally do them. Hugh's recipe serves 10 so I adjusted the quantities accordingly.

I think the key to success with Yorkies is to get the oil / fat as hot as you dare (220C ?) before putting in the batter. If the oven is not hot enough the Yorkies will be flabby and will not rise. Mine certainly rose! 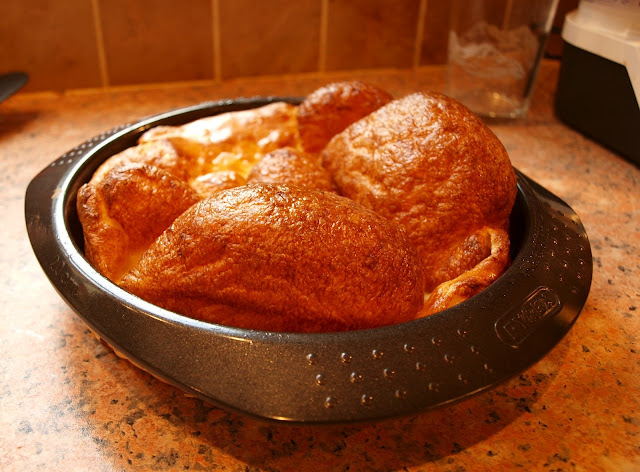 I also made sure that the pans I used were thoroughly oiled, including their rims, which I think helped to ensure that they did not stick. When the Yorkies were cooked I eased them out of the pans with a plastic spatula and laid them on plates ready for the addition of the other ingredients. You have to do this quickly, because the puddings will "deflate" and lose their crispness quite rapidly. 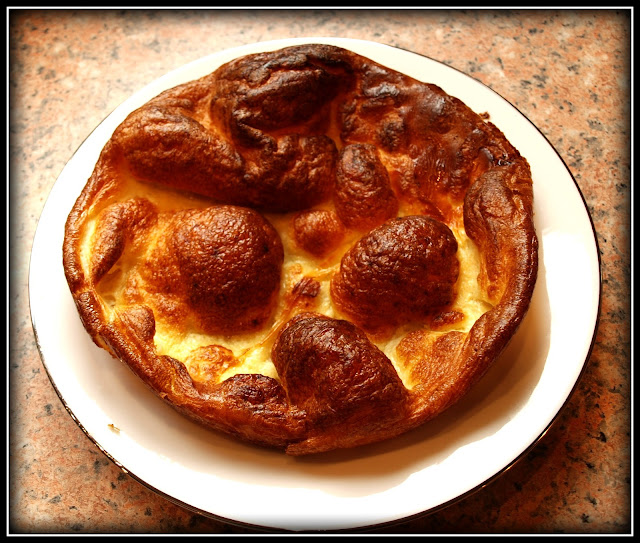 Onto the top of my Yorkies went the minced beef. This dish had been cooking in a low oven for about three and a half hours, and I put it on the hob to simmer and keep warm about half an hour before we ate, so that I could put the oven up to maximum temperature for the Yorkies. The minced beef dish included onions, carrots and peas, and was flavoured with liquid beef stock and a spoonful of Bovril beef extract for extra "unctuousness". In addition to the beef mince I also served some Broad Beans and some home-grown new potatoes. So this is what the final plateful looked like: 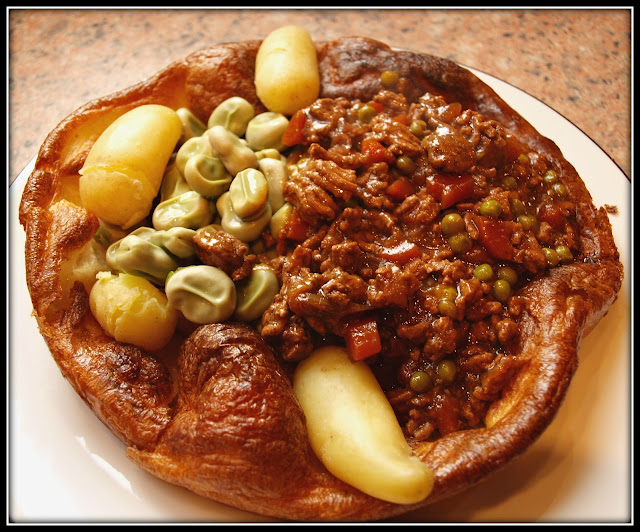 As you can see, the Yorkshire Pudding serves as a plate in its own right!

You can also use Yorkshire Puddings in this way with sweet fillings. I imagine they might be nice with some ripe peaches drizzled with honey and a dollop of Creme Fraiche on top...