My garden is full of good things to eat now, despite the continuing absence of sunshine. In a grudging sort of way I have to accept that the extra water has probably compensated for the dearth of sunshine (from the vegetables' point of view, I mean). 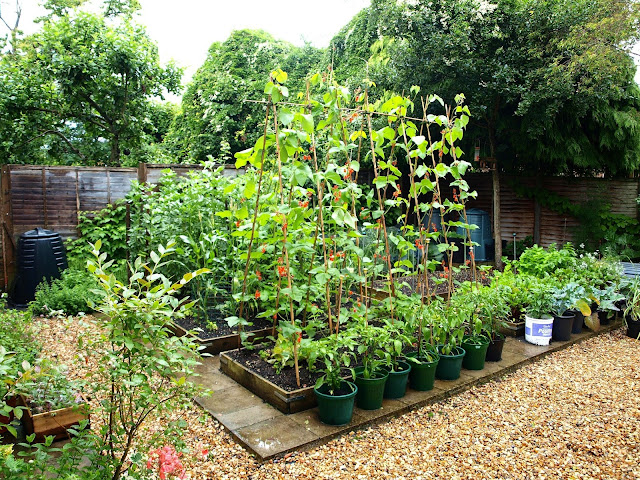 The Broad Bean harvest is in full swing. Lots of pods full of lovely beans. I think the number of pods per plant is greater this year. Normally a fair few of the flowers drop off without ever forming pods - presumably because the plants don't usually feel able to support that many pods. No such problem in 2012! 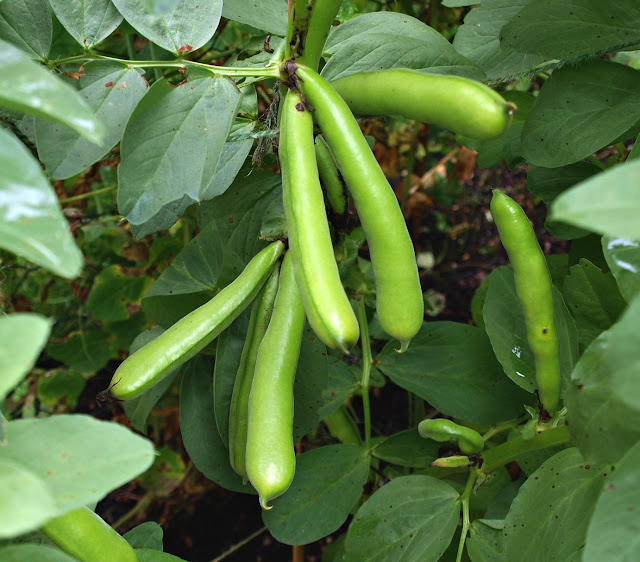 The Dwarf French Beans are nearly ready to pick. This variety is officially called "Speedy", but it has not lived up to its name. In view of its prolonged battle with the elements I am going to re-name it "Endurance"!


I think the baby Broccoli "Matsuri" is just about there. Not having grown this type before I'm unsure when to harvest, but I can't believe that the heads will get much bigger than this without flowering. After all ,the plants are only in 8" pots. 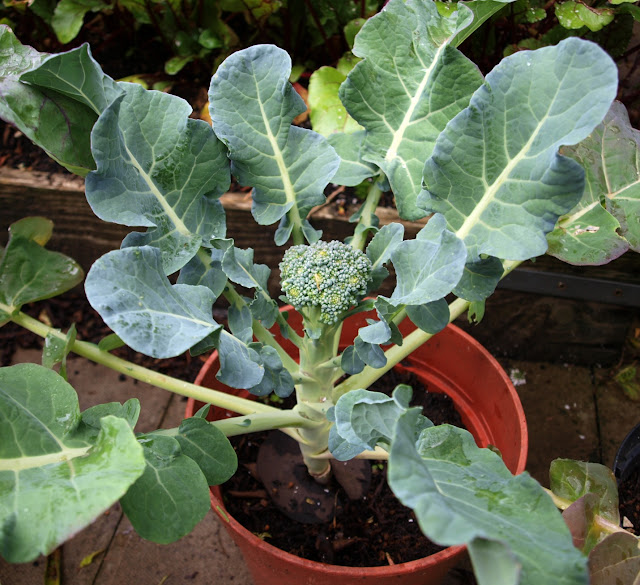 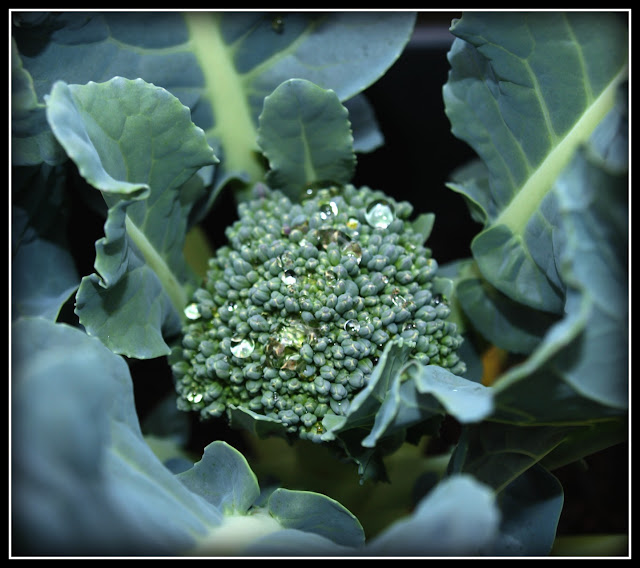 ﻿
The cucumbers are doing OK as well. I haven't harvested any more, but there are three that look as if they will be ready to pick any day now. 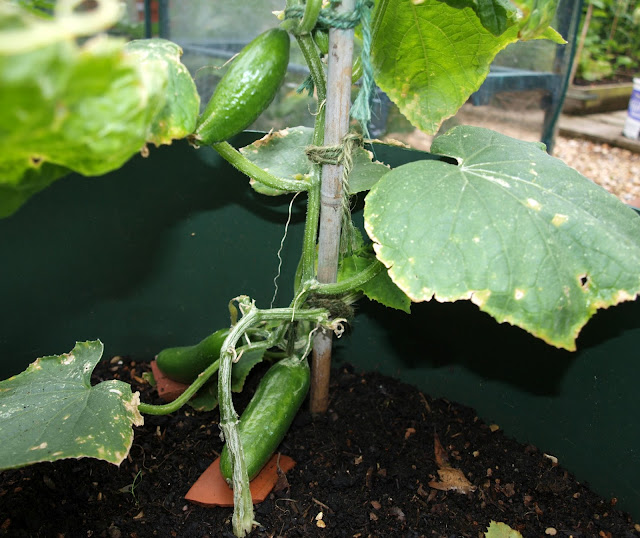 Some of the chillis are huge - but still showing no signs of ripening. They need sunshine for that, I'm
sure!

I'm not picking any more Asparagus this year - just letting the spears grow so that they will develop into fern which will help the plants to gather solar energy and build up their strength for next year. I must also give them a top dressing of Growmore fertiliser to reward them for the fine harvest they delivered this year. As the years go by, the number of spears I get increases, so they ought by rights to be amazingly brilliant by about the year 2020! 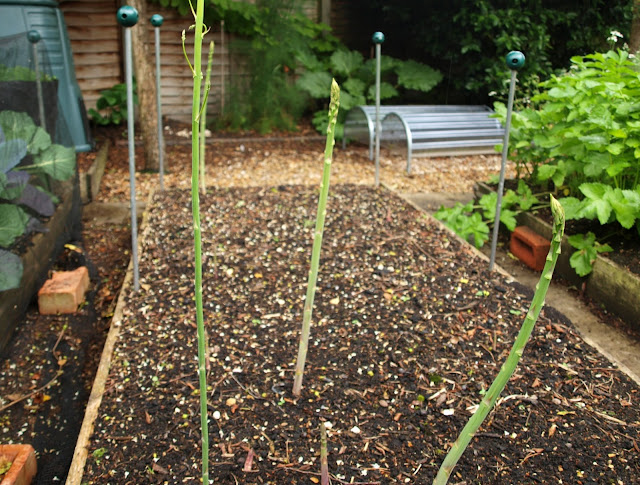 Photographed like that, the Asparagus is not very impressive, so here's a close-up for you: 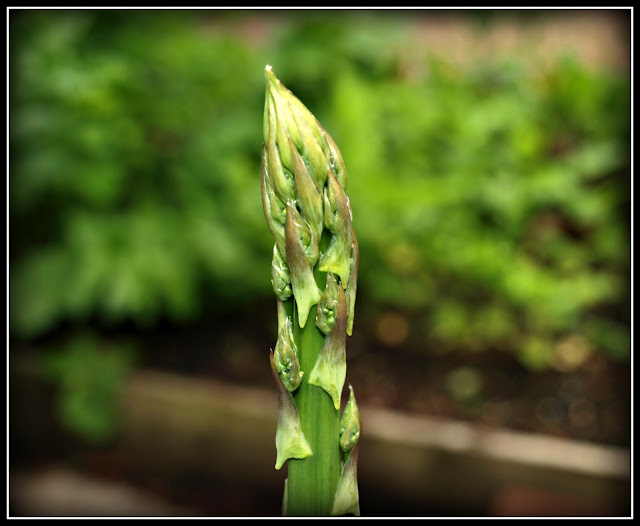 The Tomatoes are nowhere near ready yet, but at least there are lots of green fruits on most of them. This one is "Speckled Roman", a blocky plum-shaped variety, whose fruits when ripe will be red-and-yellow.


I've never grown it before so I don't know what it will be like, but it seems much less robust than most of my other types (It has fairly thin and flimsy-looking stems and leaves), and it has only set one or two fruits so far.

This one is another plum tomato type - "Incas". Looking good, but lots of lush foliage and not many fruits at present. 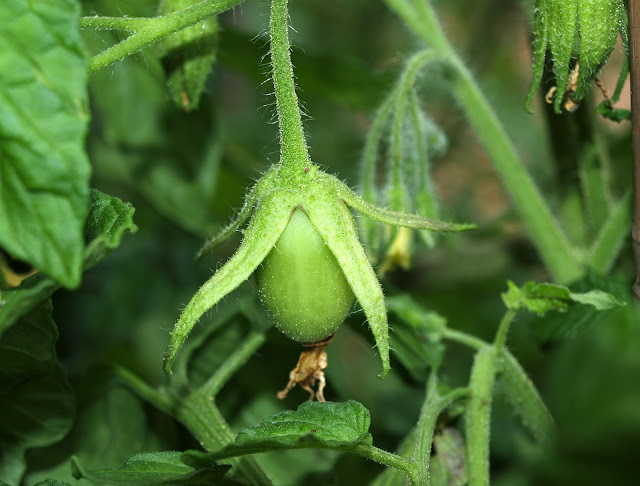 The last thing I want to show you today is the 3 Sisters, where one of the "Cherokee Trail of Tears" beans has decided that it will climb up one of the corn stalks after all. 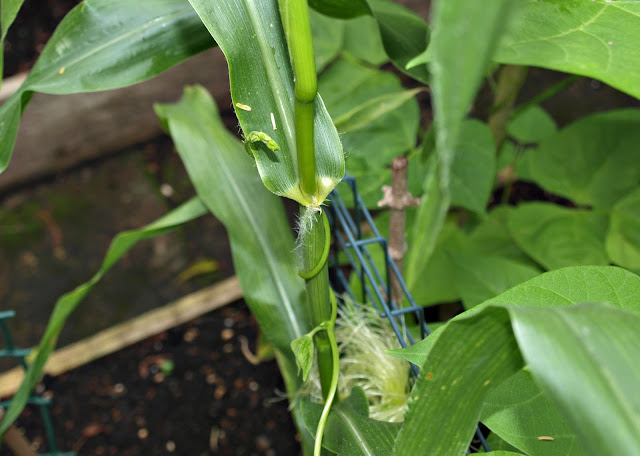 This may perhaps be a desperate measure, because all of its colleagues have managed to reach the top of their wooden poles already: 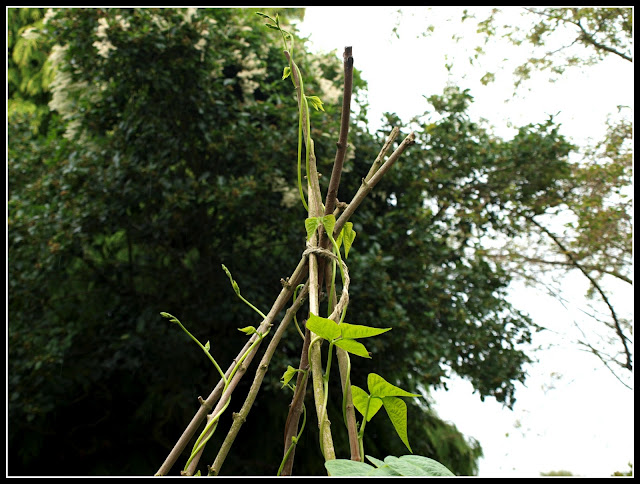 These beans, and also the Runner Beans, are looking a lot more vigorous than they did last year. I think this is down to two things: firstly the extra water they have been getting, and secondly the fact that I have planted fewer of them - which means that they have more space in which to spread out, and less competition with their peers. Sometimes Less really is More.
Posted by Mark Willis at 17:30