This week saw me harvesting the last of my Broad Beans. It was a good batch  - 990 grams - so my total for Broad Beans this year has been nearly 4.5 kilos, and I'm really pleased with that result. 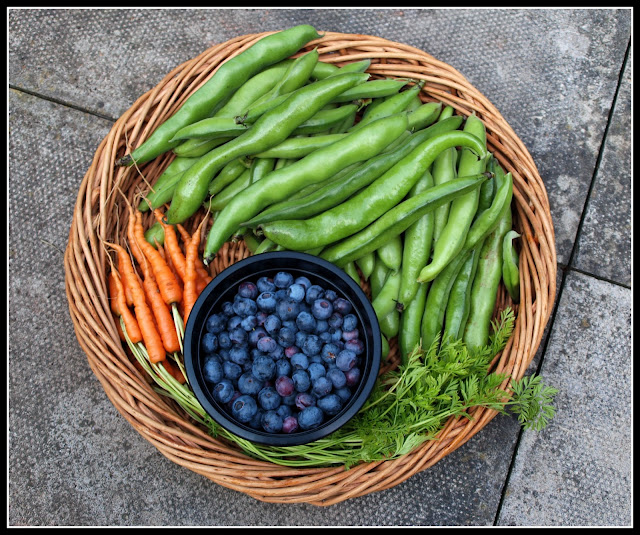 The beans were accompanied by some more finger Carrots and a nice batch of Blueberries. 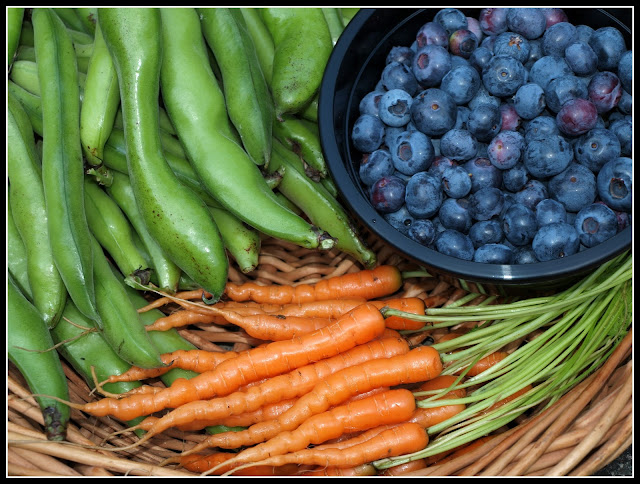 The Blueberries were mostly from the "Earliblue" bush. There was a total of just over 300 grams.  I have five Blueberry plants now, all growing in pots, and they are all of different varieties so I get quite a long cropping period. [Note: most of my Blueberry plants are ones that I have acquired as Special Offers from various magazines. If you're interested in this type of thing, the BBC Good Food magazine has a reader offer running at present whereby you can get a "Top Hat" Blueberry plant 'free', paying only £5.60 for postage.] 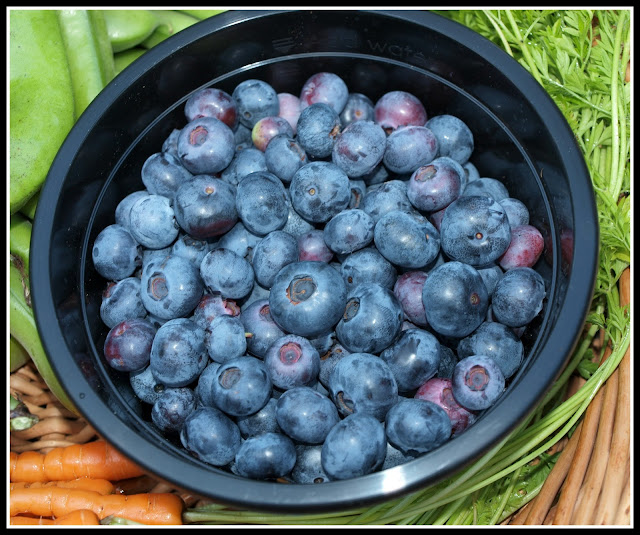 I just love the bloom on the berries. They look as if they have been lightly dusted with talcum powder! 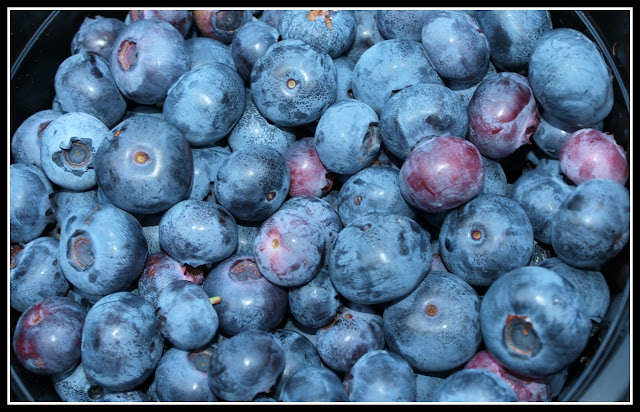 The carrots are hardly show-bench specimens, and there aren't that many of them, but they were still nice - and significantly unaffected by Carrot Fly. They were all the nicer for the fact that I have heard that most people in the UK have failed to grow ANY carrots at all this year. 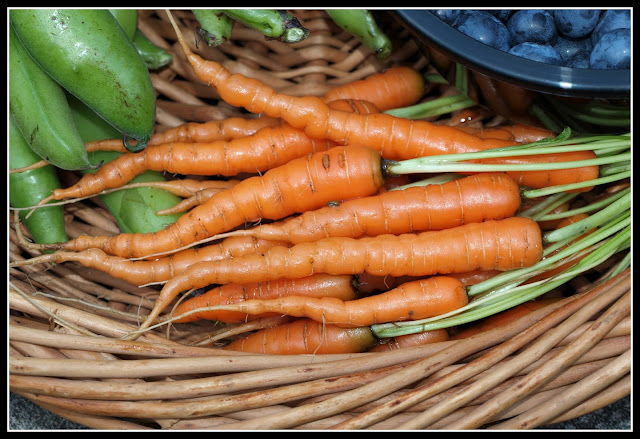 ﻿
﻿Looking at the Carrots growing in their plastic boxes in the raised planter, you wouldn't think they were worth having, but appearances can be deceptive. Underneath the compost's surface, they are not that bad. 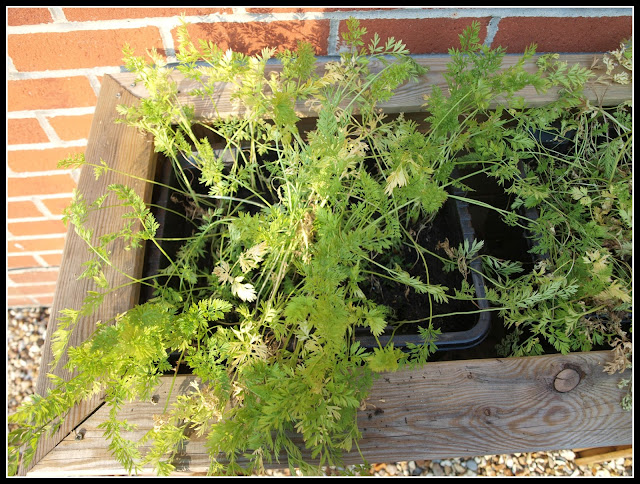 This method of growing carrots, keeping them "at altitude" seems to work. Two years in a row now I have had carrots that are worth eating. Hooray! Next year I think I may have a go at growing some bigger, maincrop, varieties.

This week I also harvested some more potatoes. This batch of "Pink Fir Apple" weighed 1.6 kilos. 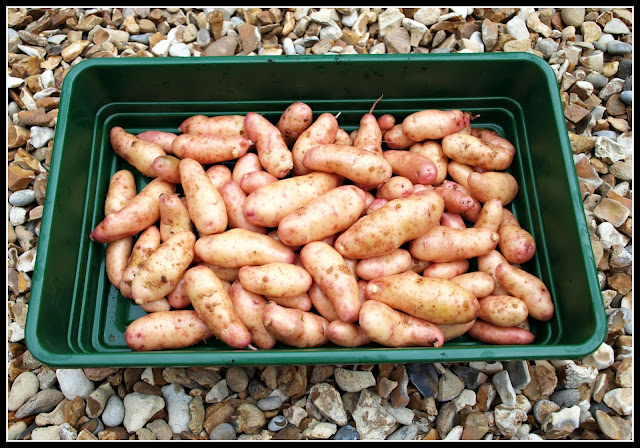 I was just a little disappointed to see that some of them have a bit of scab. Nothing too serious, and relatively easy to remove with a bit of vigorous scrubbing, but it spoils the look of them a little.

I also tidied-up my Shallot crop, removing the dried-up foliage. The total weight from the 15 sets I planted was 1.3 kilos. Somehow I thought it would be more. It looks more than three times what I started with. Maybe my nominal 500g pack (18 sets) was actually less than 500g? 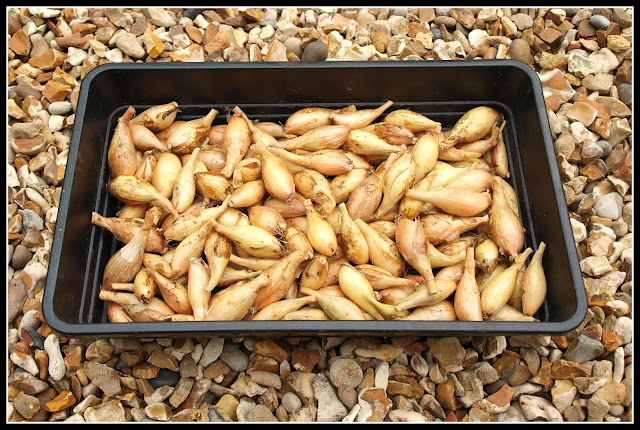 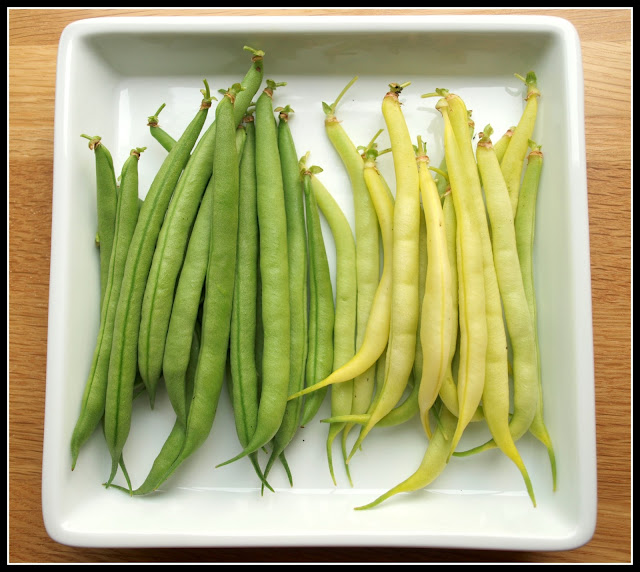 Next week will hopefully see the first picking of Runner Beans...

To see what other people have been harvesting this week, visit Harvest Monday on Daphne's Dandelions.
Posted by Mark Willis at 17:30