You all know that I am growing some purple-podded Desiree peas this year... 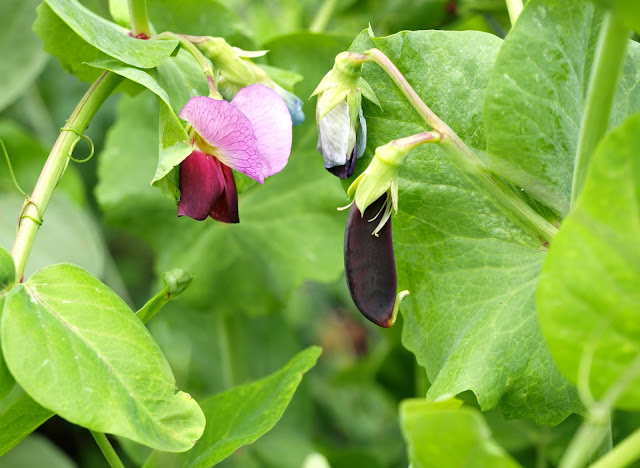 So why is it that some of the peas have decided they will not be purple-podded at all? Look at the next couple of photos. Doesn't it look as if the rain has washed the paint off some of the pods?? 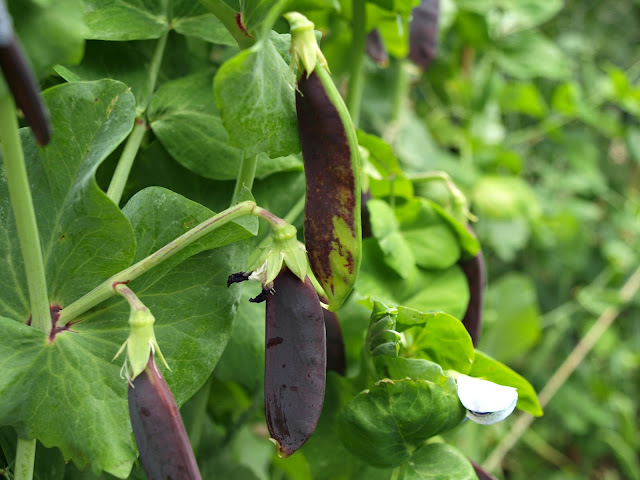 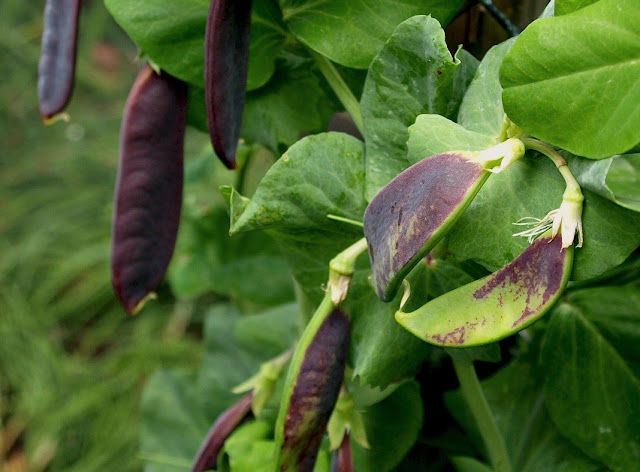 Indeed some of the plants have decided to produce exclusively green pods. They have the same purple flowers, which fade to blue as they wither, but then green pods appear instead of purple ones. 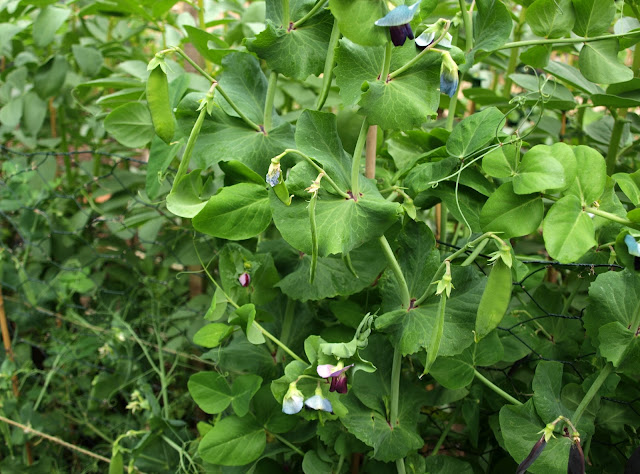 Anyway, I won't grumble too much, because there are lots of purple-podded ones too, and the plants have grown huge and they are laden with pods. 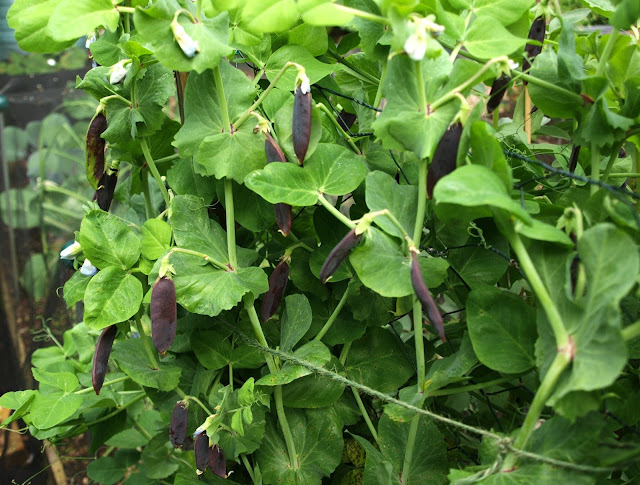 I think the fact that the pods are a different colour to the foliage will make them easier to identify, and less of them will be missed. I haven't yet picked any of them, but I'm hopeful of a good crop.

Another crop that has been seriously affected by the awful weather is the Radishes. 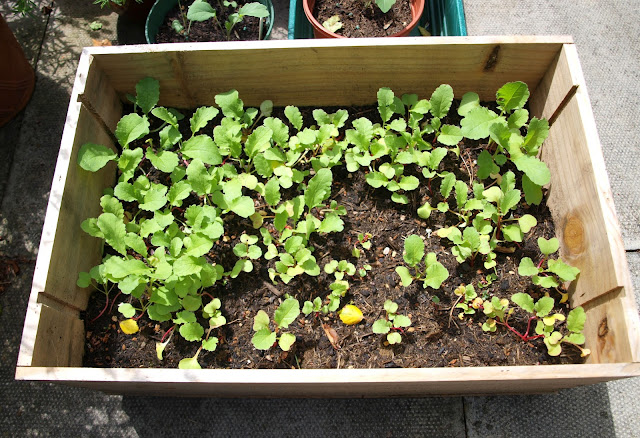 When they were very tiny we had some torrential rain, and this washed all the seedlings out of their compost so that the roots were exposed. They never managed to re-establish themselves and I don't think many of them will produce anything edible. 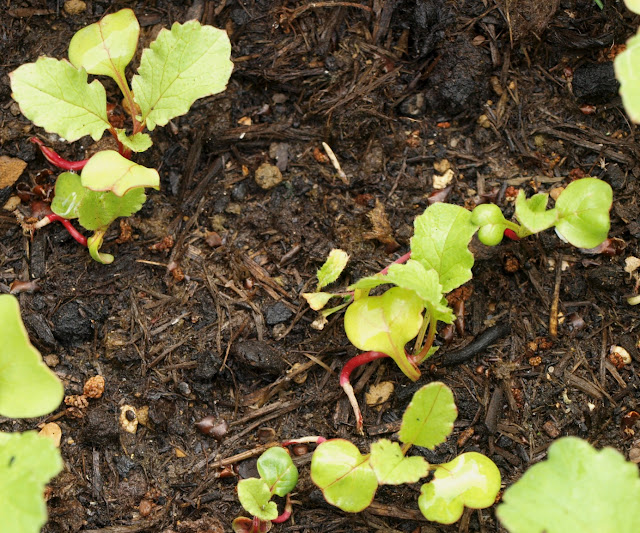 One or two of the plants in the corners of the box, where they were a little less exposed, may be useable: 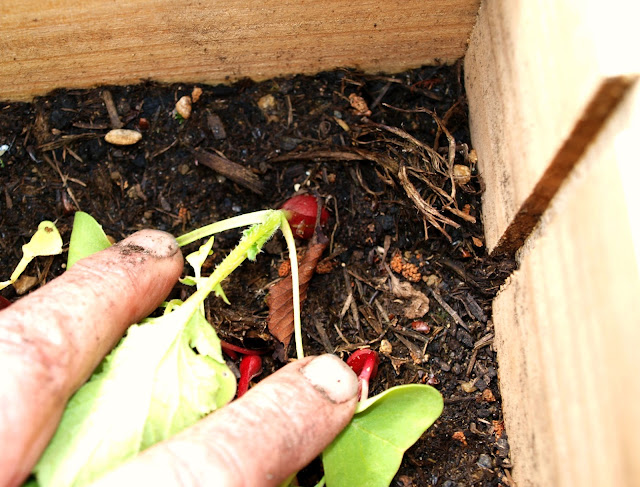 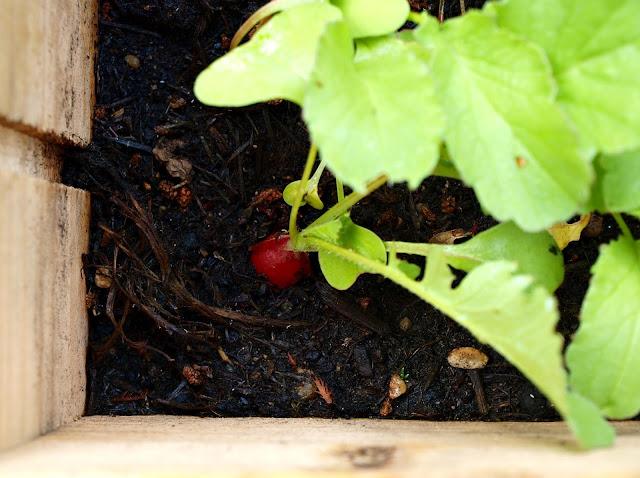 It has not been a good year for Radishes from my point of view. The first batch bolted in the really hot weather we had at the end of May, and now this.

I also think that maybe the Radishes don't like the compost I have used. Their foliage certainly looks anything but lush, and it is rather pale, so maybe it doesn't have enough nitrogen in it. 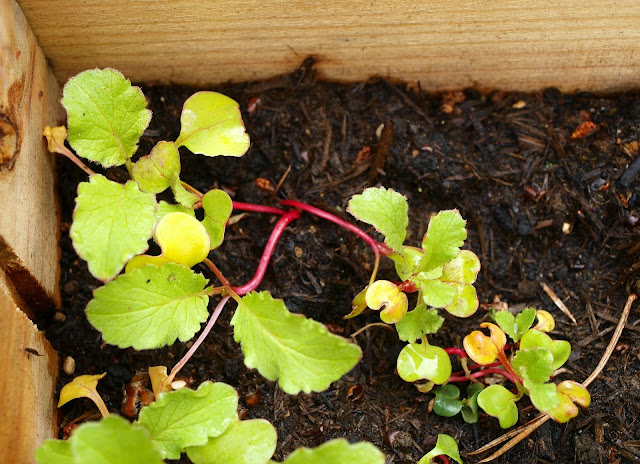 Lots of people have been writing about this sort of thing recently, so I know I'm not alone. I believe that commercial compost-producers are turning out inferior products these days. They want to produce huge quantities of compost in a very short space of time, and I'm sure they use poor materials. The compost I have been buying contains a lot of rather dry straw-like stuff. Domestic composters know that you need a good balance between the Greens and the Browns if you are to make good compost, and I just think the commerical producers often get it wrong.
Posted by Mark Willis at 17:30