It's no surprise that almost every food culture has its own version of this type of food - the Cornish pasty, the curry puff, the hand-pie, the Jamaican patty, the empanada, the panzerotto, and many others. The reason is that they are not only delicious but also convenient! Since they can be made in advance if necessary, they represent a good option for food-on-the-go. Cornish pasties are allegedly what the Cornish tin-miners used to take for their lunch, supposedly discarding the crimped edge of the pasty which is the bit they would have held with their grubby hands.

Yesterday I made the Caribbean version, the Jamaican Patty. 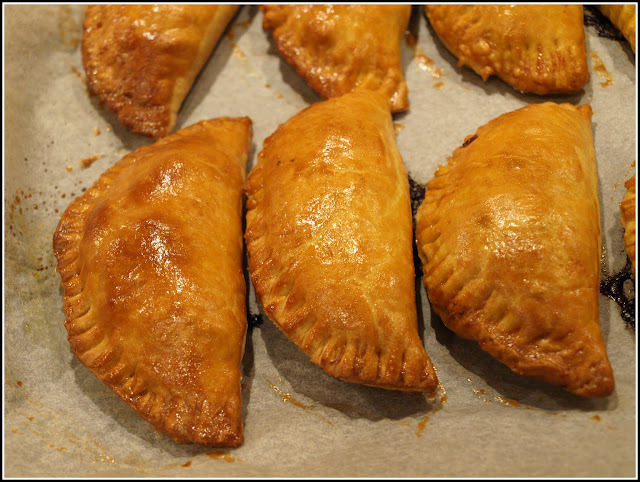 I made these once before, and the recipe I used was so successful that I used it again this time. If you want to see it (maybe even use it?), then follow this LINK.

Last time I made the Jamaican patties, we had some as a starter before a main meal, but to be honest they were a bit too filling, so this time the patties were the Main Event. I deliberately made them smaller this time, so that we could eat just the quantity we wanted. 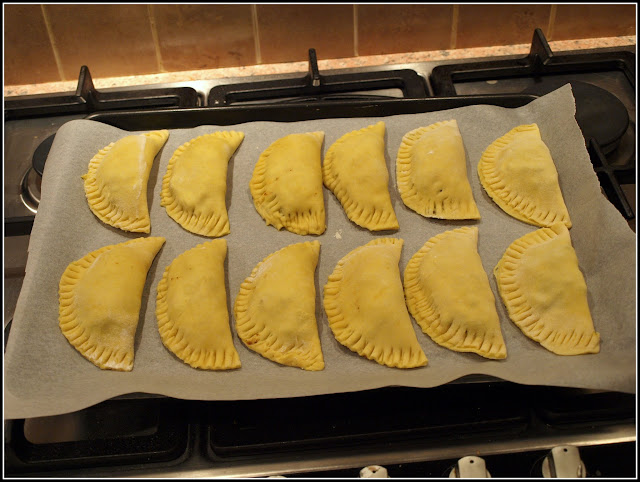 I was tempted to serve something else with the patties, like the Rice and Peas I did last time, but I resisted the temptation to overdo it. The patties are a good balance of protein and carbohydrate, they just need a vegetable accompaniment, so I served the patties with a sort of salsa / salad dish of my own invention, striving for a sort of Caribbean vibe. 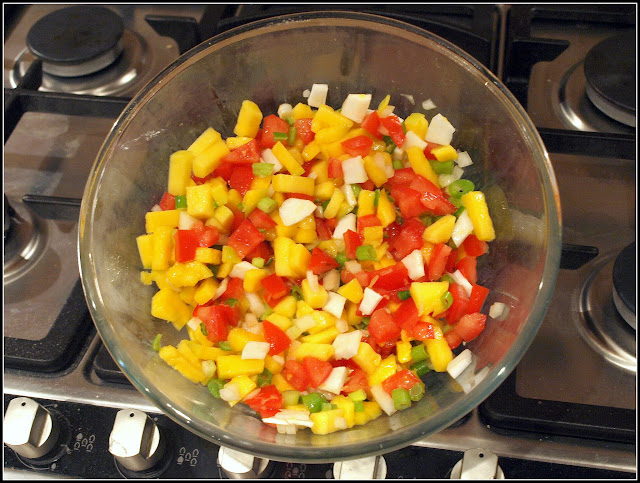 It's probably nothing like what they would eat in Jamaica, but let's preserve the illusion shall we? My dish used diced fresh tomatoes (seeds removed, for texture reasons), some mild white onion,, some Spring Onions, one red and one green chilli (seeds removed), some mango and some fresh coconut. The amounts and proportions were all a matter of judgement based on our personal preferences (in other words, I made it up as I went along!). The final touch was to add the juice of a lime and a sprinkling of salt. 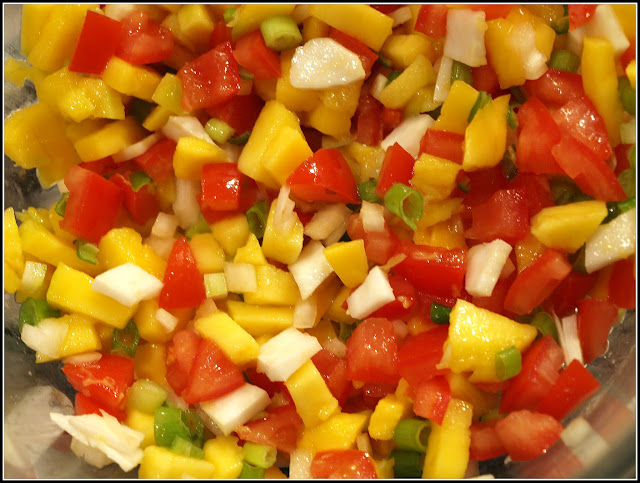 I can tell you, it was absolutely delicious. A good contrast of sweet and savoury, and lots of different textures too - we particularly liked the crunchy fresh coconut.

By the way, as well as the salsa, I also served the patties with a little bowl of Mango Chutney, which went really well with the strong curry flavour of the spiced beef.

Here is a little tutorial on making the patties.
(Read my earlier post, to which I linked above, in order to see how the pastry and filling are made.)
When the pastry is thoroughly chilled, cut it into pieces about the size of an egg (my mixture which used 250g flour was enough for 12). On a floured pastry-board, roll out each ball to make a rough disc about 5mm thick. Then use a dish of some sort as a template and cut round it with a knife. 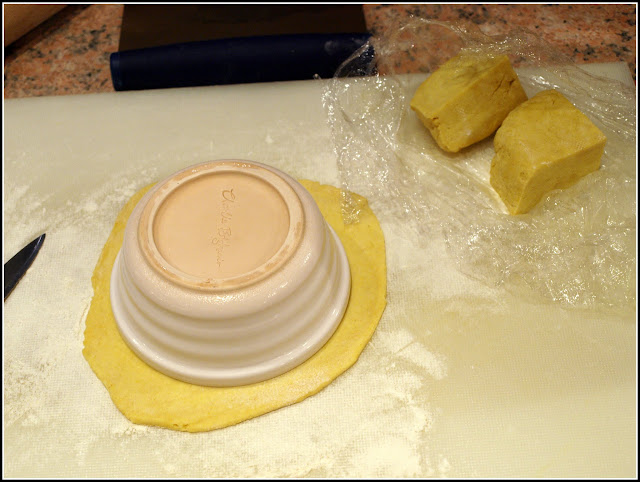 Place a spoonful of the cooked spicy mince over towards one side of the pastry disc. 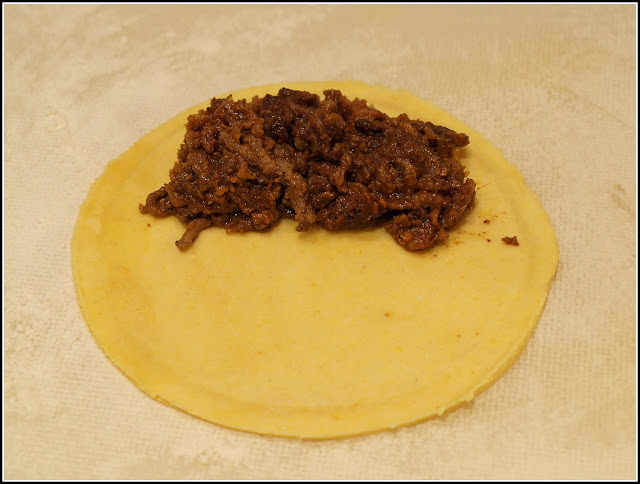 Then fold the other half of the pastry over the filling to make a semi-circular patty. Crimp the edges with a fork. [Hint: I misjudged the filling. The earlier patties had a lot more filling than the later ones! It would probably be best to divide the filling into 12 equal portions in advance, on a plate or something.] 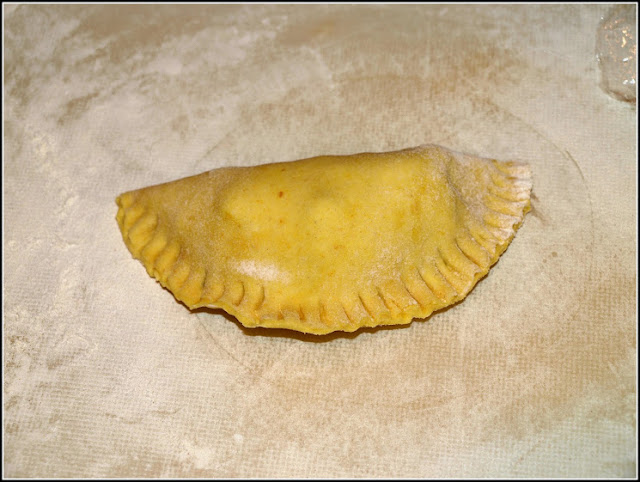 Place the patties on an oven-tray lined with baking parchment. 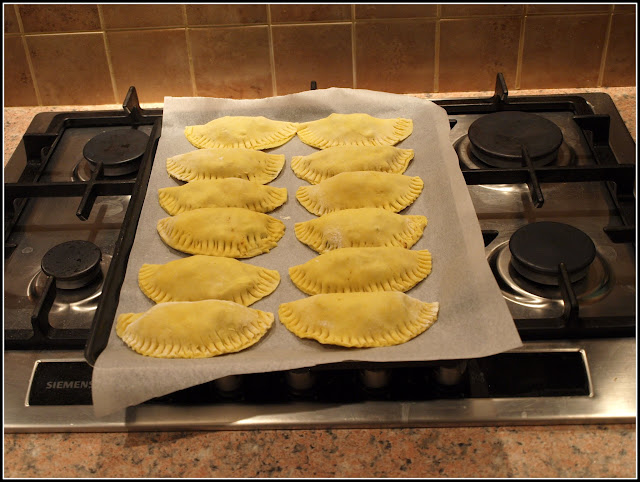 Brush the patties all over with beaten egg, 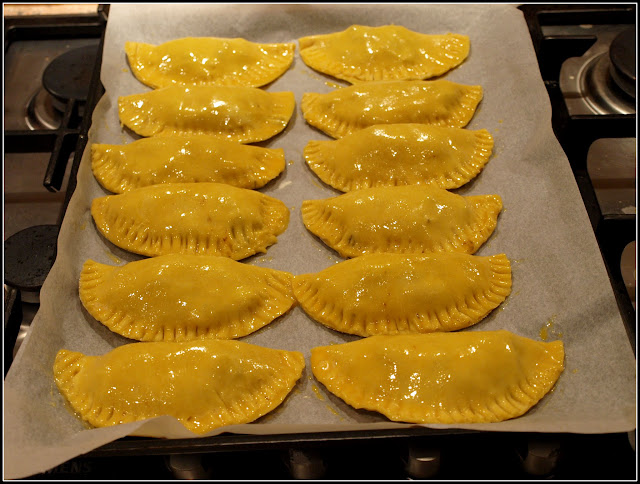 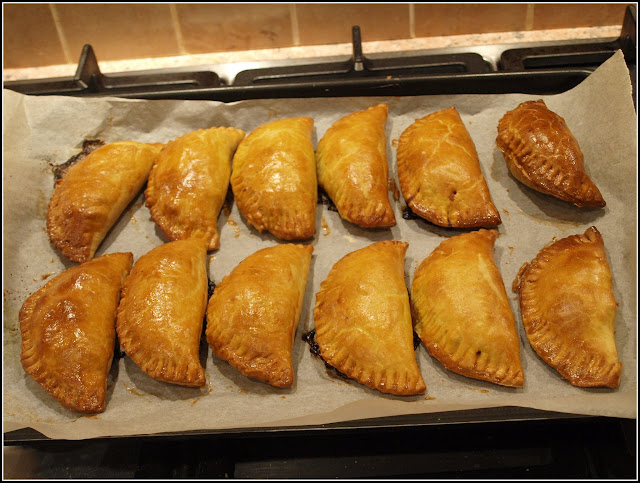 Why is the one at top right so much darker than the others, I wonder??? 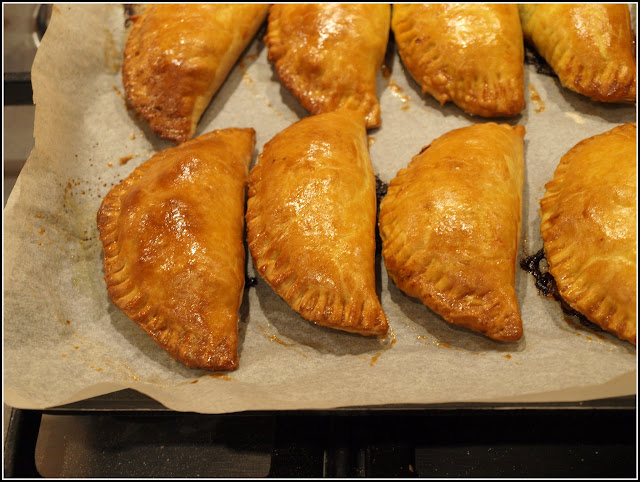 We didn't eat ALL of the patties in one sitting, so one of those is going in my lunchbox tomorrow, that's for sure!
Posted by Mark Willis at 11:00