Lamb kofte with lentils and squash

I've been leafing through my Middle Eastern cookbooks again! One of my favourite chefs (and these days a prolific author of cookbooks) is the great Yotam Ottolenghi, whose work never ceases to inspire me. His recipes always seem to be so full of variety and interest, combining textures, flavours and colours in ways that most of us would never have dreamed of. It was to him I turned for the idea behind the meal I cooked for us on Sunday. 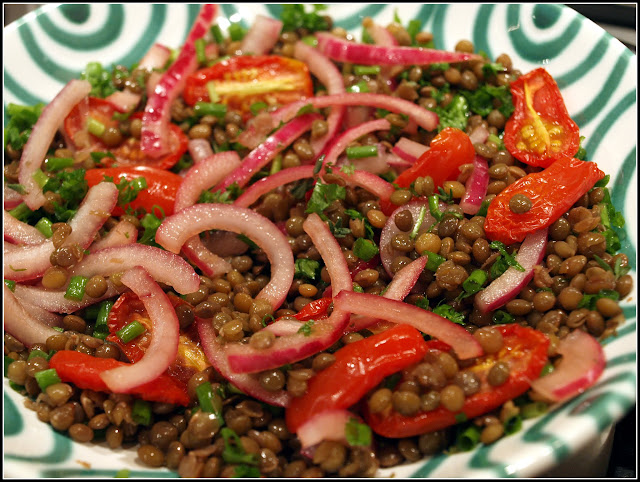 The primary elements of the meal are these:
I didn't really need a recipe for the kofte, but I refreshed my memory nevertheless by looking not only in Ottolenghi's books (we have several - "Plenty", "Jerusalem", "Plenty More"), but also in Sabrina Ghayour's "Persiana" and Olia Hercules' "Mamushka" (though I didn't find a kofte recipe in the latter.) 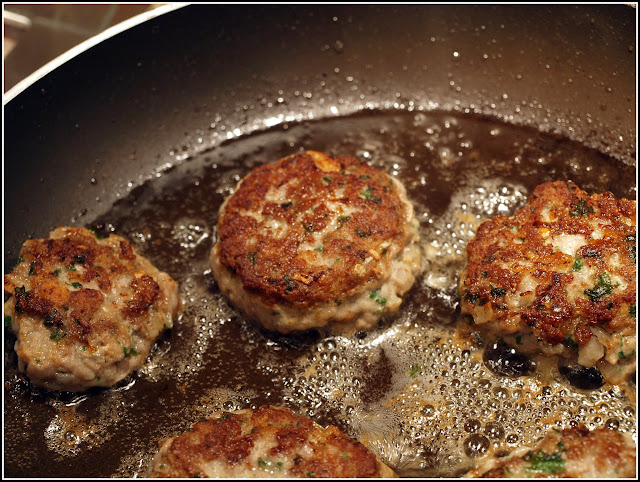 My version includes minced Lamb, breadcrumbs (these add stability by absorbing some of the fat that would otherwise run off and leave the meat dry), finely diced shallot, crushed garlic, some grated fresh Ginger, some ground Cumin, a tiny bit of ground Cinnamon, some chilli flakes, salt and pepper and loads of finely-chopped fresh Parsley, plus a small quantity of olive oil to moisten the mixture. I prepared the mixture several hours before cooking time, and left it in the fridge for the flavours to "get to know one another".

Shortly before cooking time, I removed the meat from the fridge and added an egg to it. This helps it to bind into nice neat patties. I then kneaded the mix very thoroughly, much as one would knead a bread dough. This apparently helps to break down the meat fibres, which will increase its tenderness.

The final stage was to form the mixture into individual kofte. You can do this by making a ball about the size of a large egg, and then squashing it, so that it ends up roughly circular and about 2.5cm / 1 inch thick. I actually used a cookie-cutter as a mould. 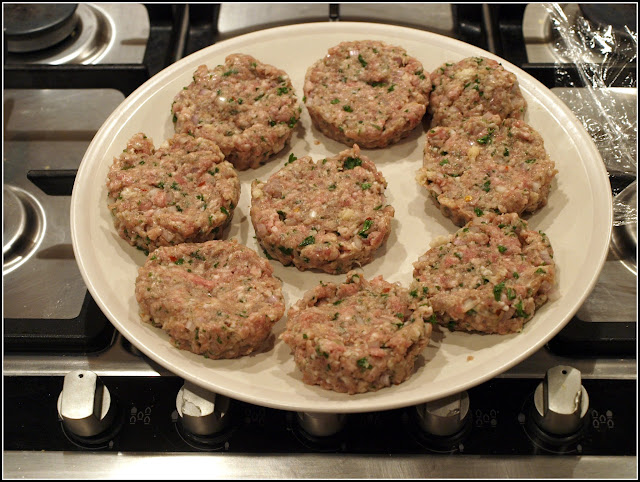 The patties are shallow-fried over a medium heat for about 8 - 10 minutes, turning at least once. A good amount of colour is desirable, because it makes the meat tastier. This is where the Squash dish began: 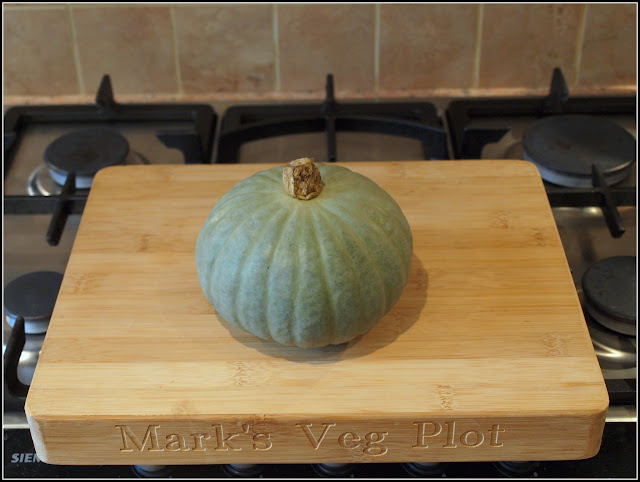 I wish I could say I grew it, but I can't. We bought it at Lidl! I know it is tiny for a squash of this type (Winter Squash "Crown Prince"), which often grows to over 10kgs, but it was just the right size for my purposes - and it didn't cost a lot either (Just over £1). Very economical too, because I only needed half of it for this meal.

I cut the squash into segments (its natural shape makes this easy!) and removed the skin. I then cut the flesh into chunks about 5cm x 2cm x 2cm, and put them in a bowl with about a tablespoon of vegetable oil, and some salt and pepper. Ensuring that each piece was well coated, I placed them on a non-stick oven tray. I also prepared a large red onion in a similar way, but kept it separate from the squash. Ottolenghi's recipe (Page 36 of "Jerusalem") cooks both vegetables together, but he says you have to keep an eye on the onion because it cooks quicker than the squash and may have to be removed to stop it burning. This sounded tricky, so I reasoned it would be better to add the onion when the squash was part-cooked. Cooking time will vary of course, according to what type of squash you use, but mine took about 25 minutes at 180C. The onion went in 10 minutes after the squash. 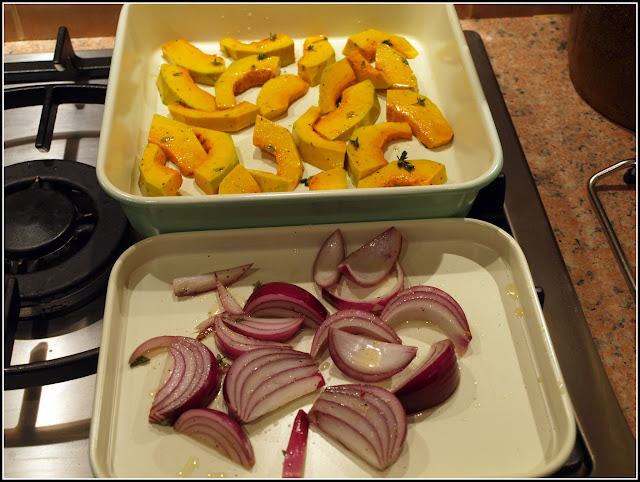 While the squash is cooking, or before, you can make the Tahini sauce / dressing. This is apparently a very popular sauce in Palestine / Israel / Lebanon, perhaps as ubiquitous as Tomato Ketchup in the UK! You make it by mixing commercial tahini paste with lemon juice, salt and water, adding raw garlic if desired, aiming to get a texture that is pourable like clear honey.

When the squash and onions were cooked (nicely brown at the edges...) I removed them from the oven and arranged them in a serving-dish, allowing them to cool a little. Ottolenghi's dish is served cold, but I served mine warm because I felt it would be more to our liking that way. Just before serving, I drizzled the Tahini sauce over the top and sprinkled the dish with a light dusting of Za'atar. I made an amendment in respect of the Pine-nut garnish too: I toasted them in a hot dry skillet rather than frying them in oil. 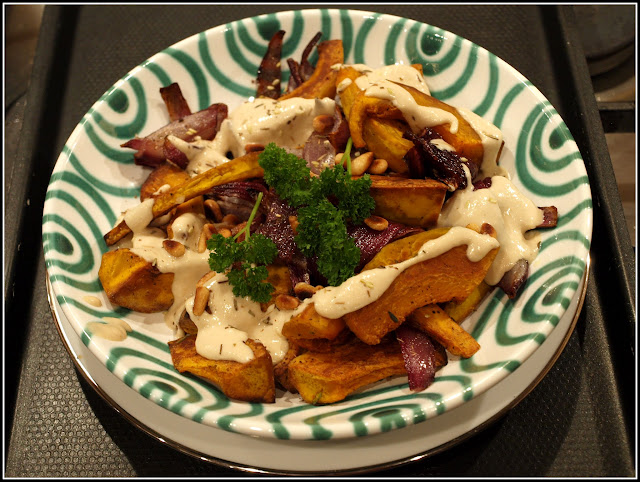 Now the lentil salad. Again, this was based on an Ottolenghi dish - "Castelluccio lentils with tomatoes and Gorgonzola" (Page 222 of "Plenty") - except that I decided not to use any cheese. The main thing to appreciate here is that the dish requires semi-dried tomatoes. Fortunately I was aware of this and started some off in my dehydrator several hours before I needed them. Of course you could always use commercially-produced ones from a jar...

Preparing this dish is easy enough as long as you think ahead. Not only do you need the semi-dried tomatoes, but you also need to cook some lentils and quick-pickle some red onion by steeping it in wine vinegar for a while. Other than that it is just an "assembly job", mixing the ingredients carefully and making the dish look attractive. Adding plenty of fresh green herbs helps with this. I used Chives, Parsley and Thyme. 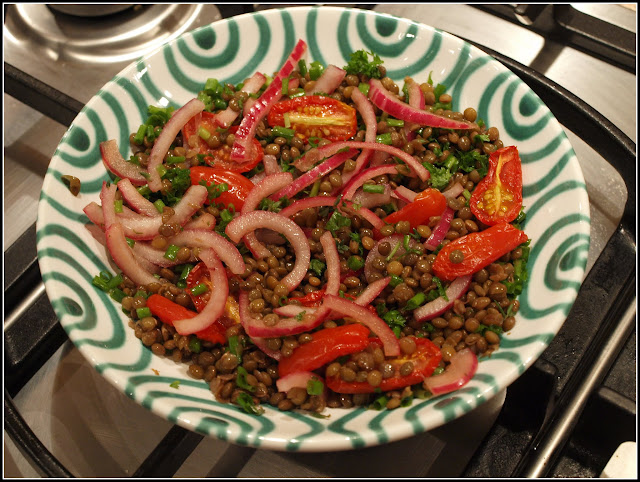 The last dish is simplicity itself - Bulgur (cracked wheat) reconstituted in hot chicken stock. With Jane being diabetic it is important that our meals are properly balanced, and here the bulgur provides the carbohydrate element to balance with the protein in the meat and lentils, and the vegetable element provided by squash, onions and tomatoes. Not only that, but it is also delicious! The stock I used had been made the previous day with the carcass of a roast chicken, and was strongly flavoured with Leaf Celery from the garden.

Right, so here it is, put together: 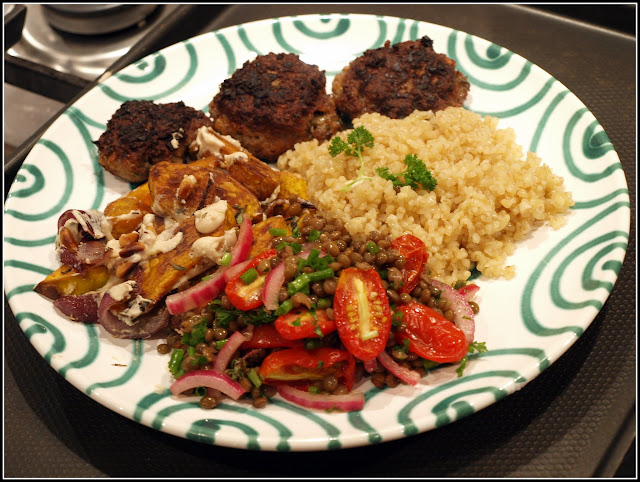 You may think this meal sounds like an awful lot of work, but let me assure you that preparing it was for me a thoroughly enjoyable experience. I did it on a Sunday, a day on which I had plenty of time and no other tasks to do. I love cooking, so this is the sort of day I like! And the end result is just so much better than some Ready Meal monstrosity warmed up in a microwave.

This meal was everything I had wanted it to be: nutritious, tasty, colourful, interesting. My favourite part was actually the pickled onions - so sweet, yet so sour; so crunchy, yet so soft! And the kofte were good too. They were nicely caramelised on the outside, but still succulent on the inside, and though I say it myself, I got the spicing exactly right too. Jane said they were just like the ones we had had when on holiday in Turkey. I'll take that as a compliment, as I know it was intended to be!
Posted by Mark Willis at 12:00