Right now the garden is progressing rapidly, and I have taken lots of photos, so I thought it would be a good idea to publish some of them, providing effectively an update of progress... 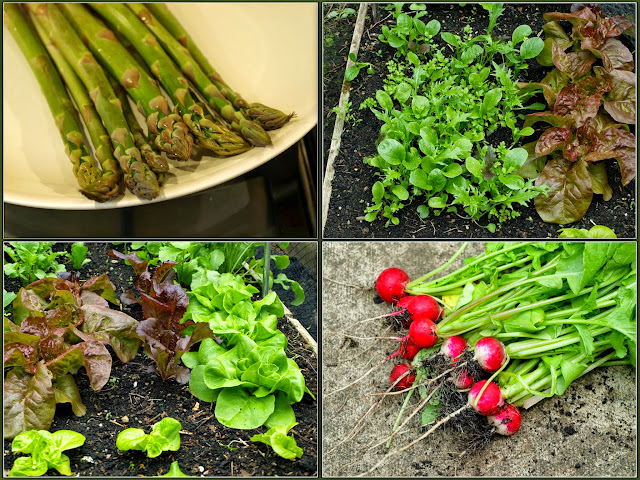 The Broad Beans are looking fine. Lots of flowers, which are just beginning to fade, so hopefully there will be lots of lovely pods to follow.


I have planted out two cucumber plants in a big container, protected by a big cloche. 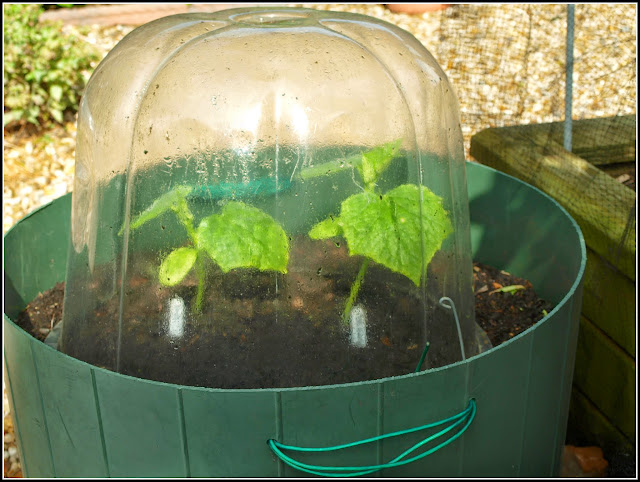 "Mini Munch" is so far a lot stronger than "Diva", but it's early days still. 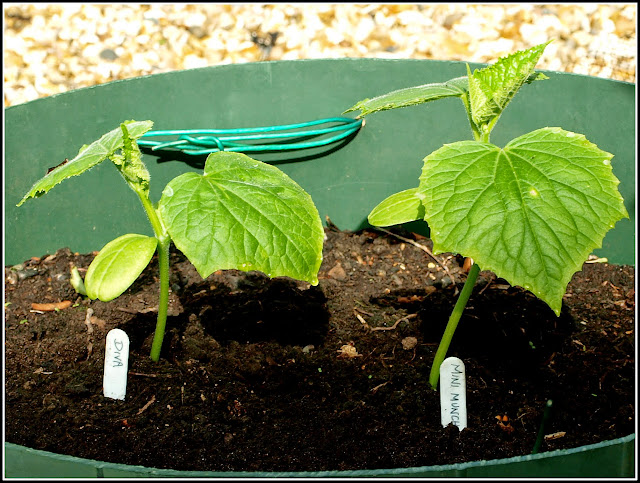 Some French Beans have joined the Runners in my new raised bed. These ones are "Kew Blue". I have protected them with some pieces of stiff wire, to try to deter the Blackbirds from digging them up. 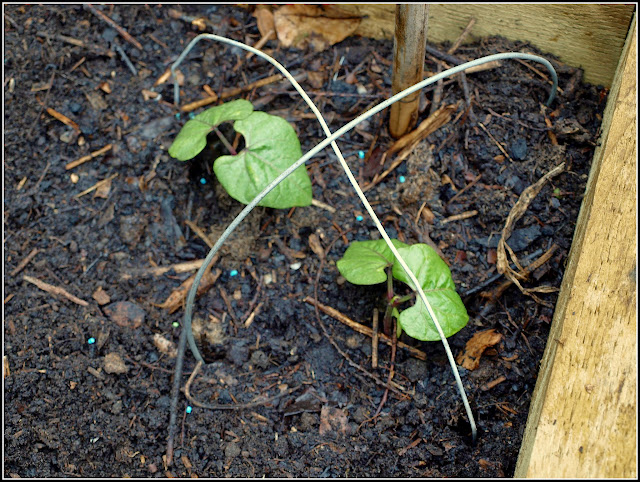 The Blackbirds seem to have a particular fondness for the corners of the beds. They dig out the compost in their efforts to find edible bugs. 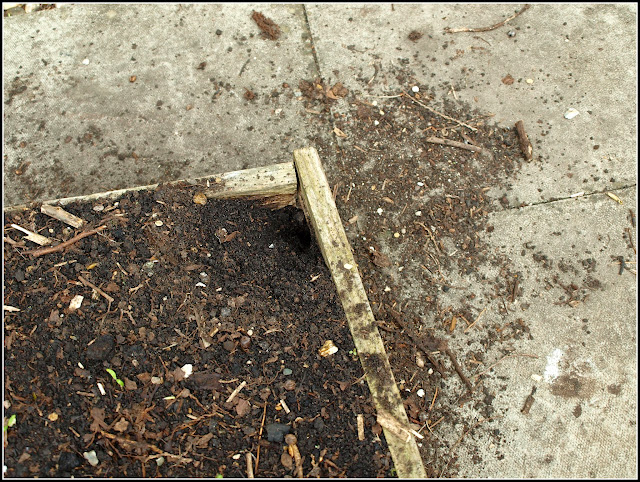 It won't be long before we are eating Lettuce! 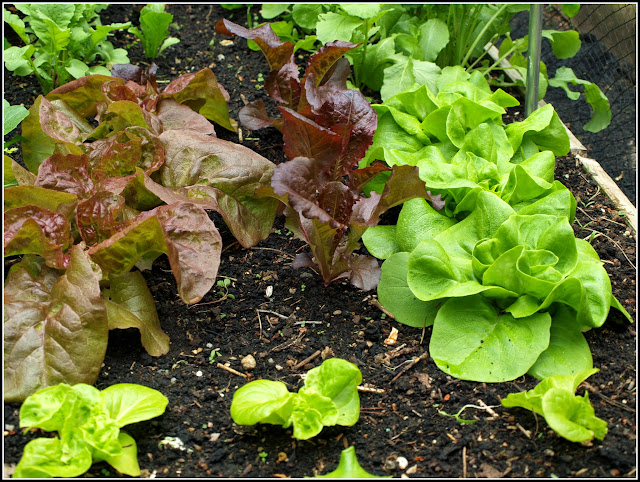 Next to the Lettuce is my patch of Cutting Salad, comprising mainly Pak Choi, Mizuna, Rocket and Cress. 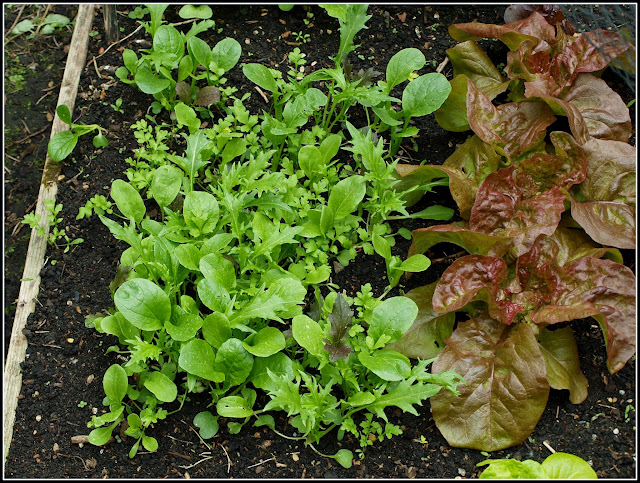 The Radishes have been OK, though maybe so far not as good as last year, which was an exceptionally good year for them. 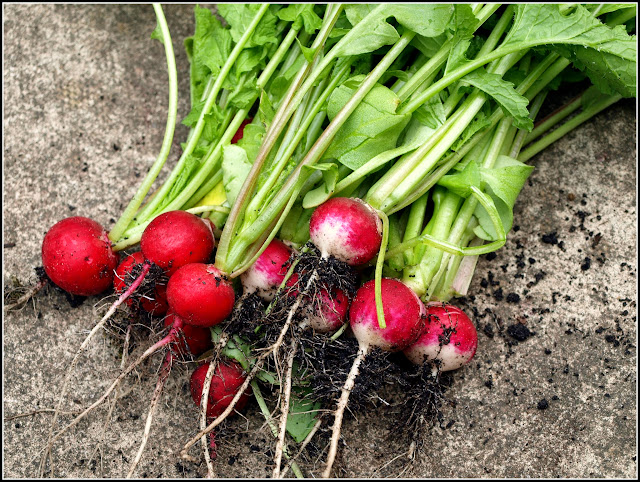 Perhaps they have put a bit too much energy into their leaves? The large amount of home-made compost I dug into that bed a few months back may possibly have provided too much nitrogen (which promotes leaf-formation). 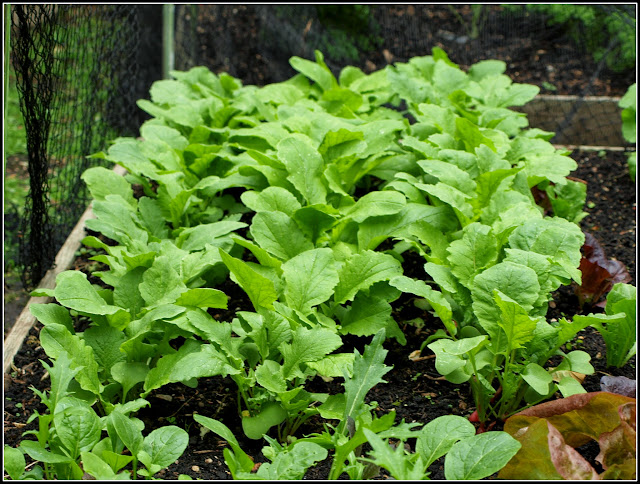 This is the bed containing brassicas and Parsley. I had been going to remove the Parsley prior to planting the brassicas, but I'm glad I didn't. It is currently very luxuriant and producing masses of leaves. 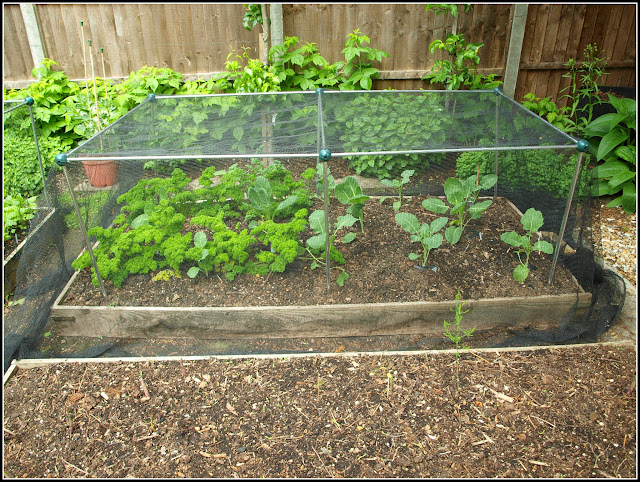 This is a closer view of some of the brassicas. The bigger ones are Brussels Sprouts and the smaller ones are "De Ciccio" broccoli. 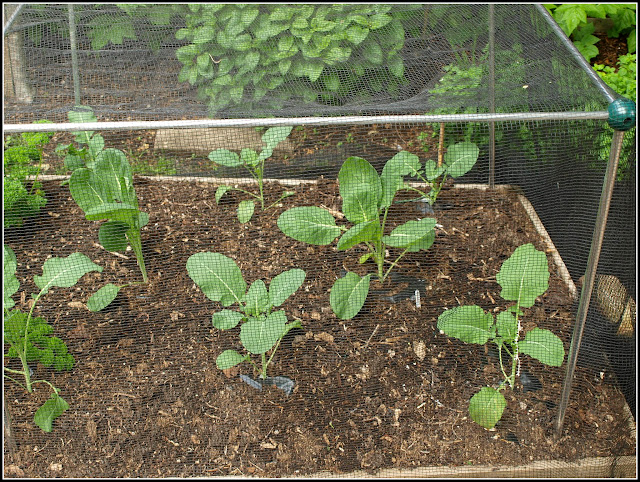 You will notice that almost everything in my vegetable garden is netted. Without nets the crops would suffer a lot, possibly to the extent of being non-viable. I'm talking about damage from root flies, butterflies, birds, foxes, cats - the lot!

This is my Woodblocx raised bed, with two rows of Parsnips at the left, 6 Kohlrabi and 4 Celeriac at the left, and space in the middle destined to host some Leeks. One of the rows of Parsnips looks a bit sparsely-populated, but in between the visible plants are more little seedlings coming on, from a second sowing. By a happy accident therefore I should get Parsnips to eat over a longer period of time. 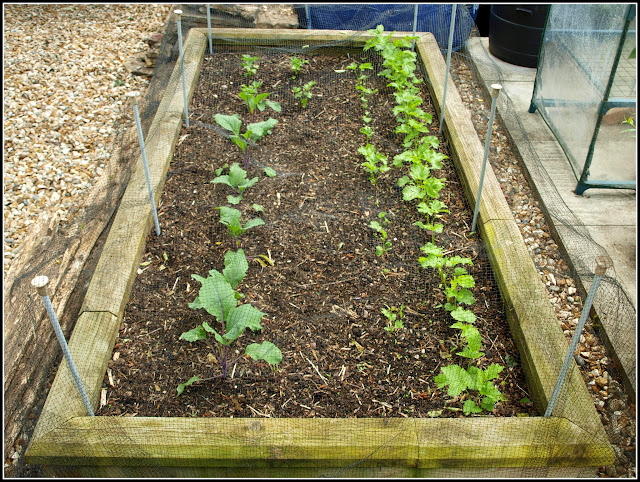 These are my containers of Strawberries. Not yet netted, but they soon will be! 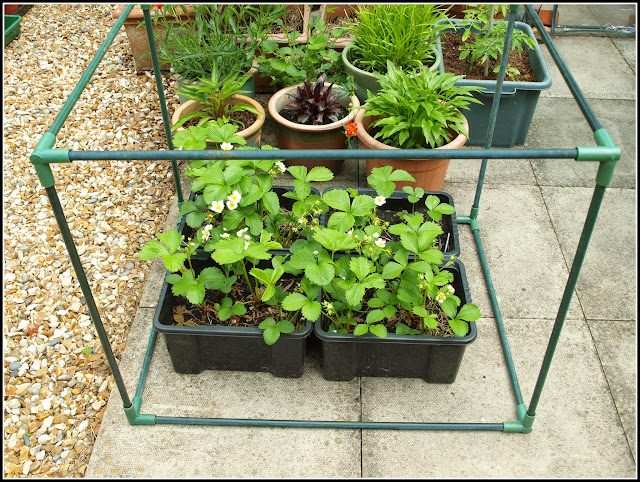 I'll never get a big crop from that small number of plants, but there are few things nicer than home-grown Strawberries eaten straight off the plant, so even a few will be very welcome.

Next year's PSB plants are already on the go. Still very small of course, but going according to plan. 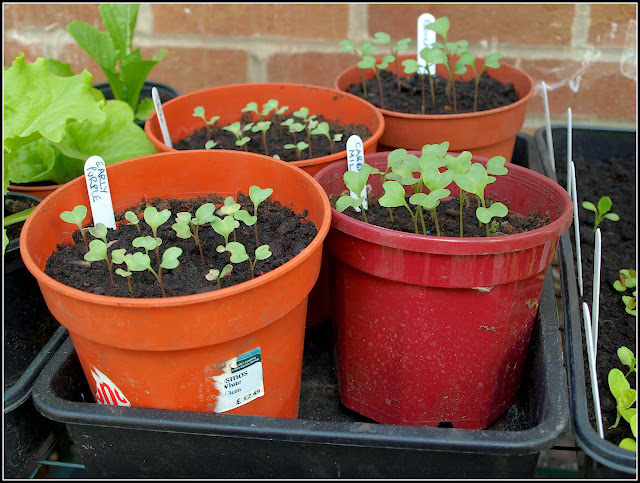 So, you can see that it I have been busy in the garden. That's about it for now - more "status reports" will follow soon, I'm sure.

Here in the UK it's a Bank Holiday on Monday, which means most people get a 3-day weekend. It will probably be the busiest weekend of the year for gardeners and Garden Centres alike. Have a nice time, Folks, and make the most of it!
Posted by Mark Willis at 14:00