The Festival was held on The Views, which is a piece of public land next to the Council offices, which is used for things like hosting the travelling funfair and the November 5th fireworks. Admission was a very modest £1.

Here we are, look: that's our Council offices in the background, and a general view of The Views. 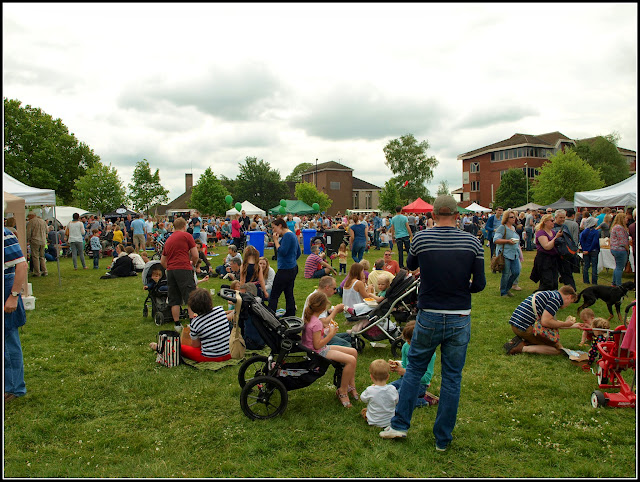 Since we live pretty close to the centre of town we went early, and it's a good job we did. Half an hour later and all the car-parks would have been full. There were thousands of people there! [Attendance was about 8000, I understand]. It was particularly gratifying to see how many families with young children were there. In my opinion, kids should be educated about real food, from the earliest age.

The festival is a mixture of several different food-related things. There were (free) talks and demonstrations, stalls selling food and drink to consume there and then; stalls selling food and drink to take away; even a band to keep the punters entertained. Some of the visitors looked as if they meant to stay all day, having brought folding seats, picnic rugs, cold-boxes etc. And why not? The weather, although not great, was much better than had been forecast.

At the end of the day, this is what a festival like this is all about - putting people in touch with good food and drink, and traders making money (see photo below). 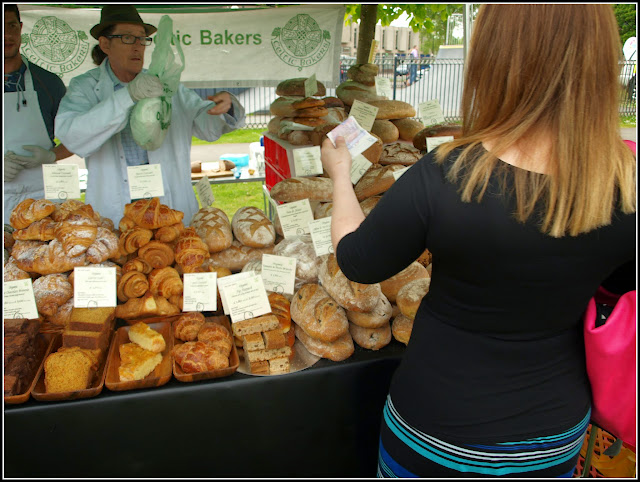 I read recently that consumption of the British sliced white loaf is in serious decline (e.g. Greggs the bakers stopping selling loaves!). This is because Brits have finally realised that it is rubbish and are turning in droves to the so-called "artisan" bread. In other words, bread that sells for £3.50 a loaf, not 89p. Like this... 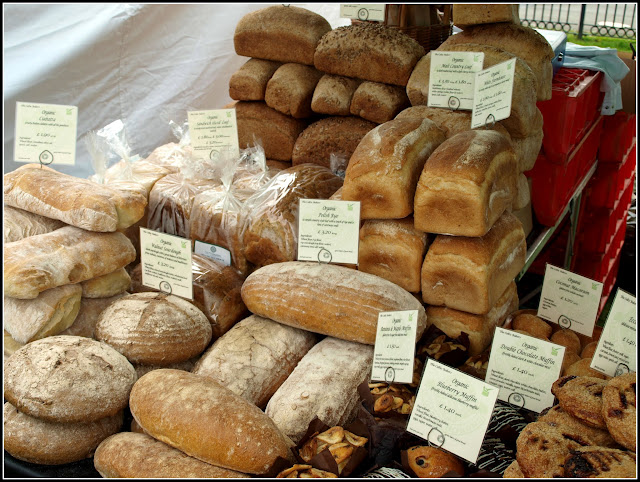 The continental breads were well represented. This is Focaccia. Looks nice too! 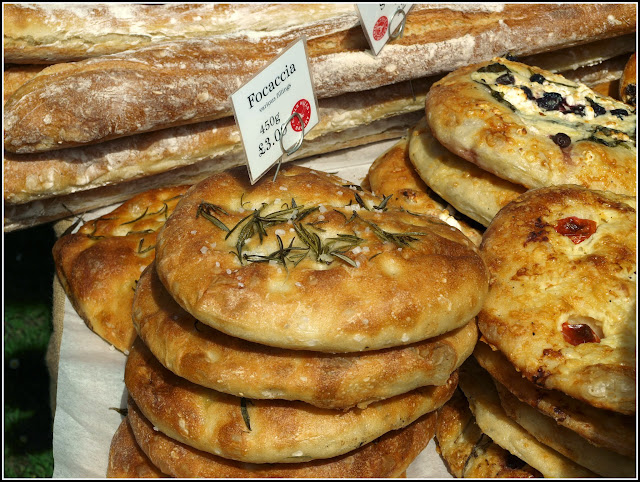 These are slices of Tomato pastry tart (foreground) and a type of Pissaladiere [onion tart with olive and anchovy] (background). 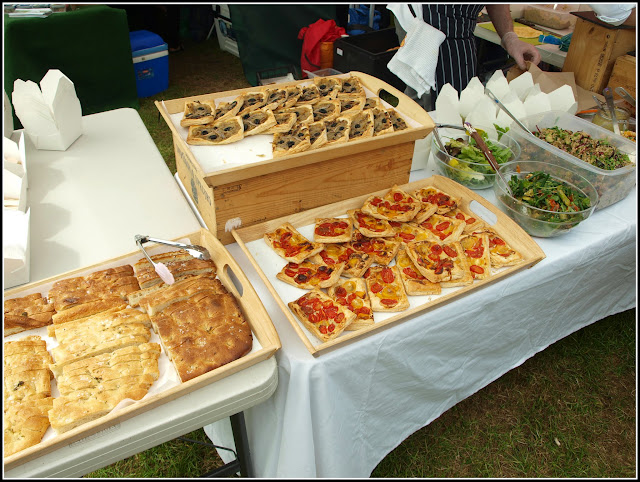 There were lots of stalls like this (yawn!). This one is selling fruit jams and conserves etc. I'm sure many of the products are very nice, but I'm aware that things like this often seem delicious when you try a mouthful at a show, but less attractive when you get them home. 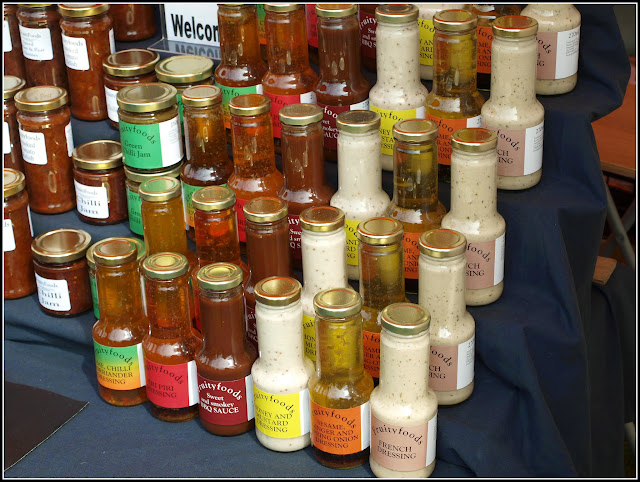 This one is selling chutneys and pickles. Ditto. The packaging on this product line is a bit too minimalist, I think. 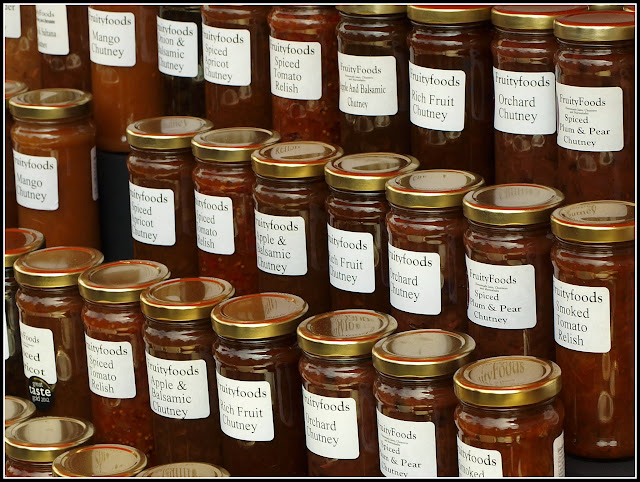 This stall was one that particularly attracted out attention. The Cold Pressed Oil Company, based in Crondall, about 5 miles from Fleet. Their products are mostly based on Rapeseed oil, and very delicious and healthy they are too. 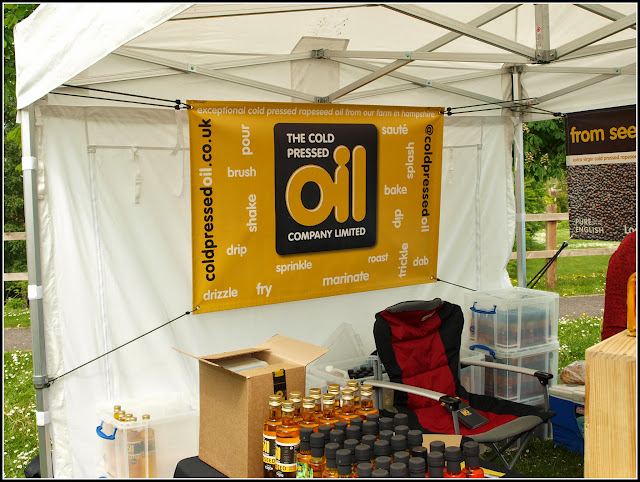 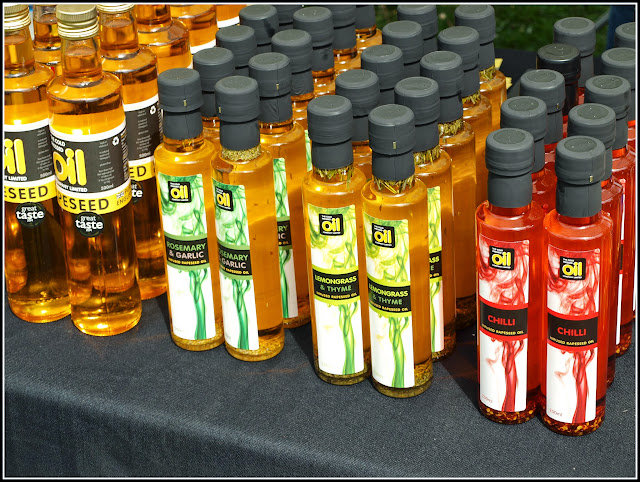 This is the stall of Pepperpot Herbs, based in Tilford, near Farnham - again just a few miles from Fleet. I sometimes correspond with the proprietor(s) on Twitter, but this was the first time I had seen their products for real. I was very impressed with the quality of their plants - so much better than what you find in most Garden Centres! As well as herbs, they also sell flowering plants that have herbal / medicinal properties. I was seriously tempted, but my garden is already packed with herbs. 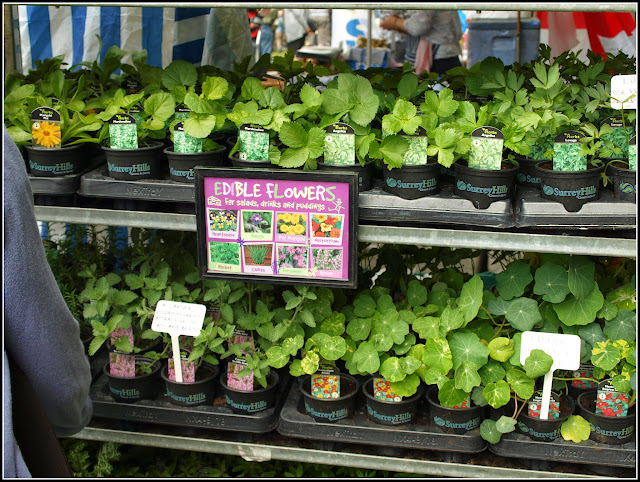 Representing the "Food to consume immediately" category, how about this magnificent Paella? 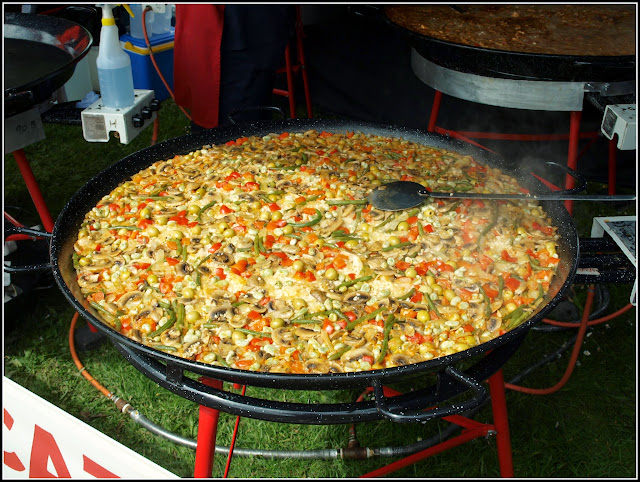 I didn't take any photos of the numerous stalls selling buns filled with burgers, steaks, sausages etc (I'm sure you know what a burger looks like), although I will admit that they were a cut above the average (venison burgers, for instance). I wish now that I had taken a picture of the stall selling traditional Nepalese curry ("Bhat"), just for old times' sake - and in current circumstances to show solidarity with the people of Nepal who suffered so much at the hands of those earthquakes a couple of weeks ago. It would also have demonstrated quite nicely how long the queues for food were!

We were actually in the market for some meat, and eventually settled on some diced beef, with which to make a curry. We bought 3 of these 1lb packs for £10. For good quality pasture-fed beef, that is a darned good price. It's what you would pay for "ordinary" beef at a supermarket, whose provenance is unknown - and the less said about the ethics of its rearing and slaughter, the better! Ours came from The Traditional Beef Company, based in Farley, near Salisbury, Wiltshire. 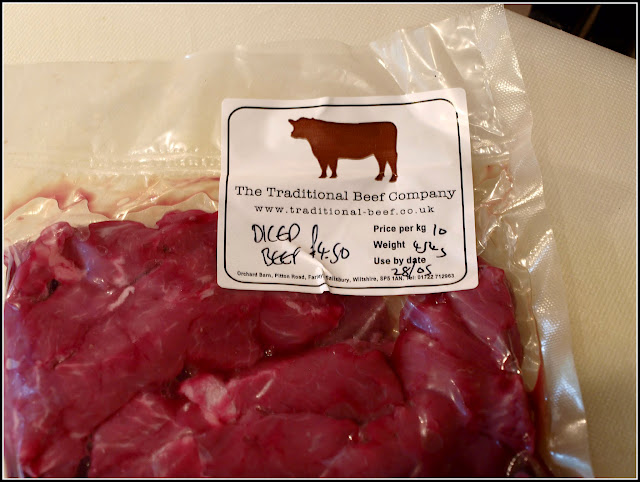 This is another product that persuaded us to fork out some cash - a beautiful and very tasty salami made at Parsonage Farm, part of the Hampshire Charcuterie alliance. The one we bought is flavoured with Garlic and Fennel (it has a very Italian flavour!), but they make several others too. Actually it reminded us very much of the preserved meats we have bought in Ferney market, France, when visiting out daughter Fiona. 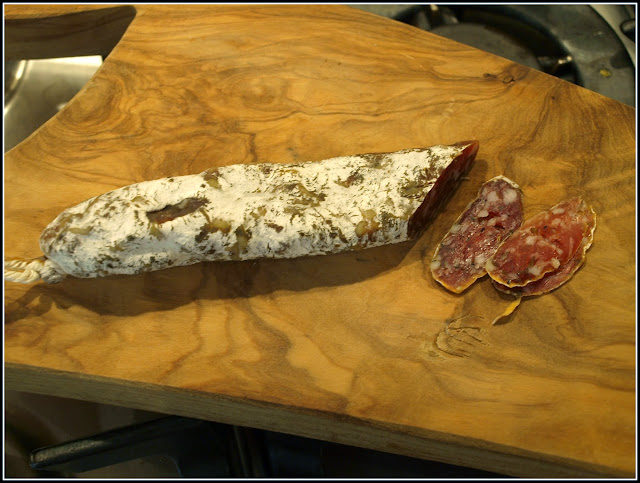 The "Star of the Show" award however goes to Twisted Nose, makers of small-batch premium Gin, Vodka and Vermouth. One of their products is Watercress-infused Gin - a VERY Hampshire product! The business is based in Old Alresford, a village about 20 miles from Fleet, which got a mention in a post I wrote the other day about a trip to Old Winchester Hill. On their stand they had the most amazing (and covetable!) portable Cocktail Cabinet, holding all the paraphernalia you would need to make a very special G-and-T...(except perhaps the Butler). 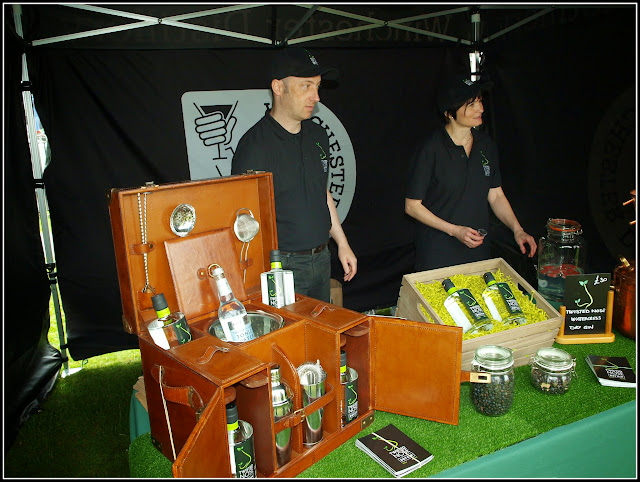 Regrettably, their Gin, whilst being very lovely, is also very expensive, so a bottle of it did NOT come home with us.
Posted by Mark Willis at 12:00