Last weekend I had my first ever attempt at making Lahmacun (pronounced "Lah-ma-jun"). This is a Turkish dish which we first encountered while on holiday at Bördϋbet . It reminds me of this: 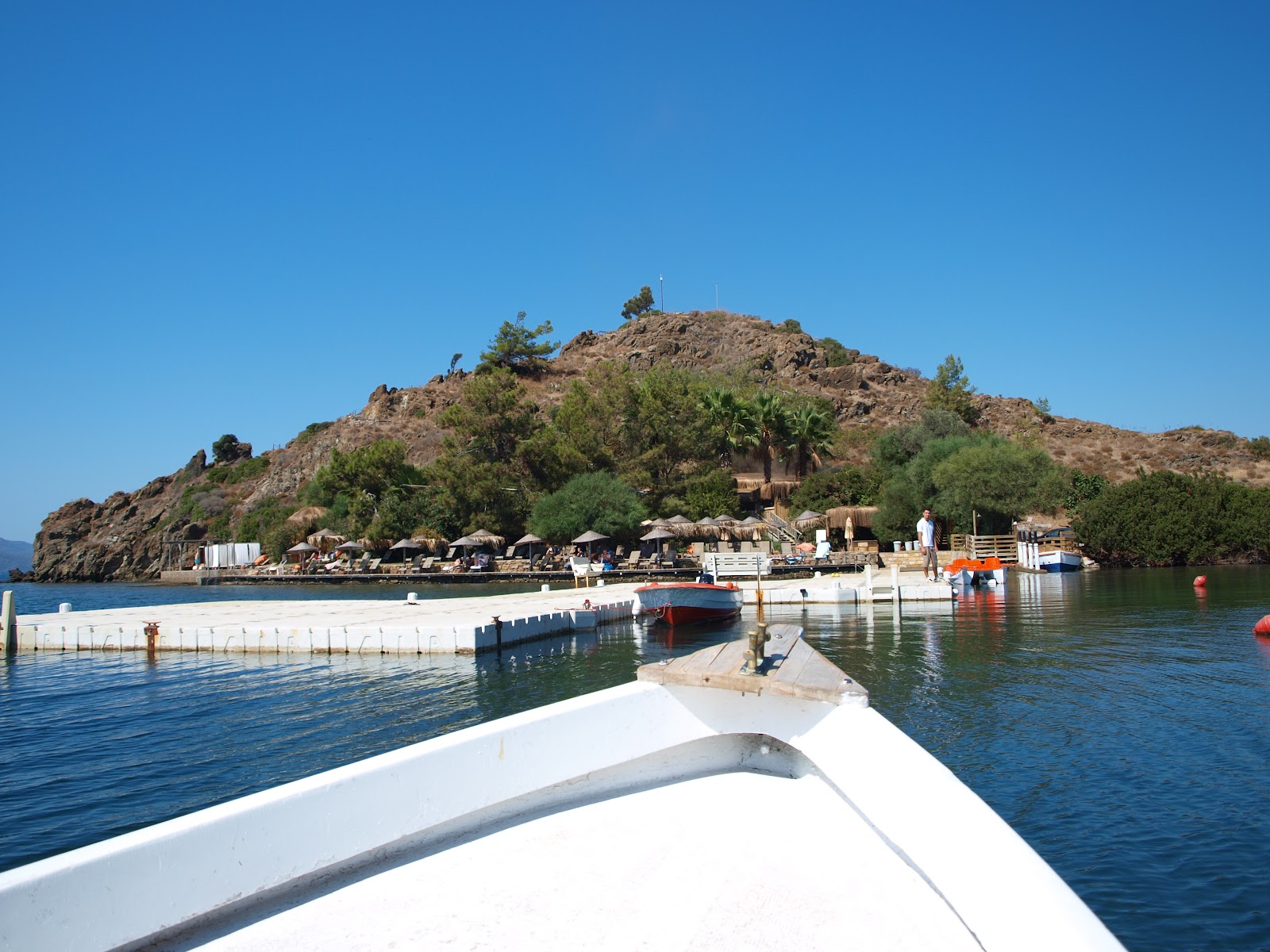 It is basically a variation on the theme of pizza. Thin discs of bread dough are cooked quickly (preferably in a wood-fired oven), with a topping of spicy meat paste - usually lamb. 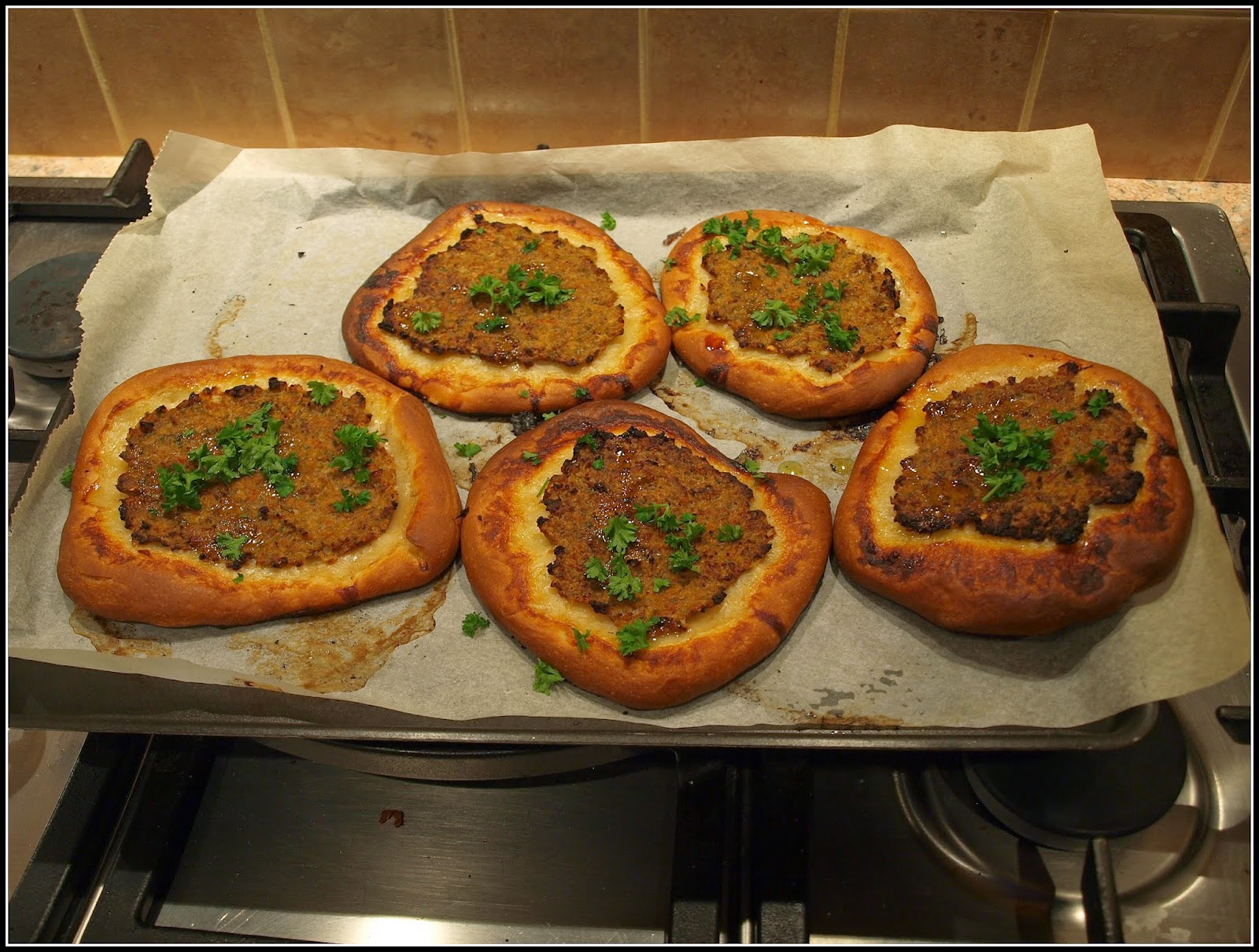 I followed the recipe in Sabrina Ghayour's book "Persiana", which is really uncomplicated and easy to follow. The bread dough is made with very little water, but gets its moisture from yogurt. Unusually, the dough is kneaded four times - each time for 5 minutes followed by resting for 10.

The topping was harder to make than I thought it would be. It uses minced lamb, with onion, tomato and parsley, with lots of salt and pepper. Oh, and two teaspoons of chilli flakes! For added flavour, I also included a teaspoonful of dried oregano and a half a teaspoonful of ground cumin. The problem was getting the mixture to the right texture, which is supposed to be like a paste. Despite lengthy chopping with my largest knife (the prescribed method), the mixture still seemed too lumpy, and I finally resorted to putting it in the food-processor. In retrospect this was a mistake, because it stretched the fibres of the meat and still didn't produce a good paste. Next time I'll just keep chopping for longer!


Sabrina Ghayour doesn't give any indication of how thick the dough should be when rolled out. She just says to divide the dough into 8 pieces and roll each one out to a disc roughly six inches in diameter. I think my discs were probably a bit too thick - they produced something along the lines of "Deep Crust Pizza". Here they are after loading with the meat "paste": 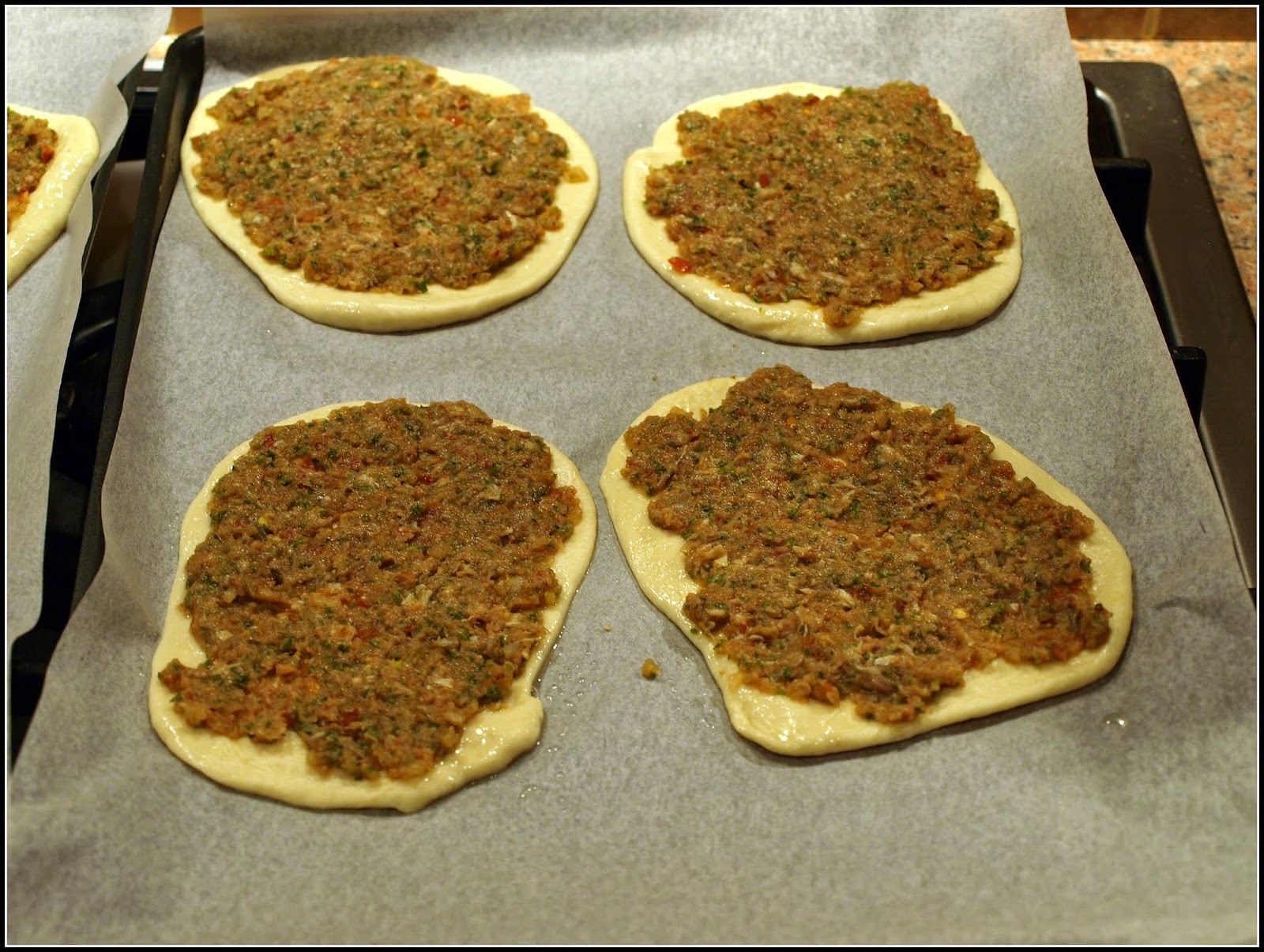 The recipe is understandably imprecise on cooking times - this is very much a matter of judgement, especially if you are using a wood-fired oven! It says "200C for 10 - 15 minutes". Mine needed more like 20. 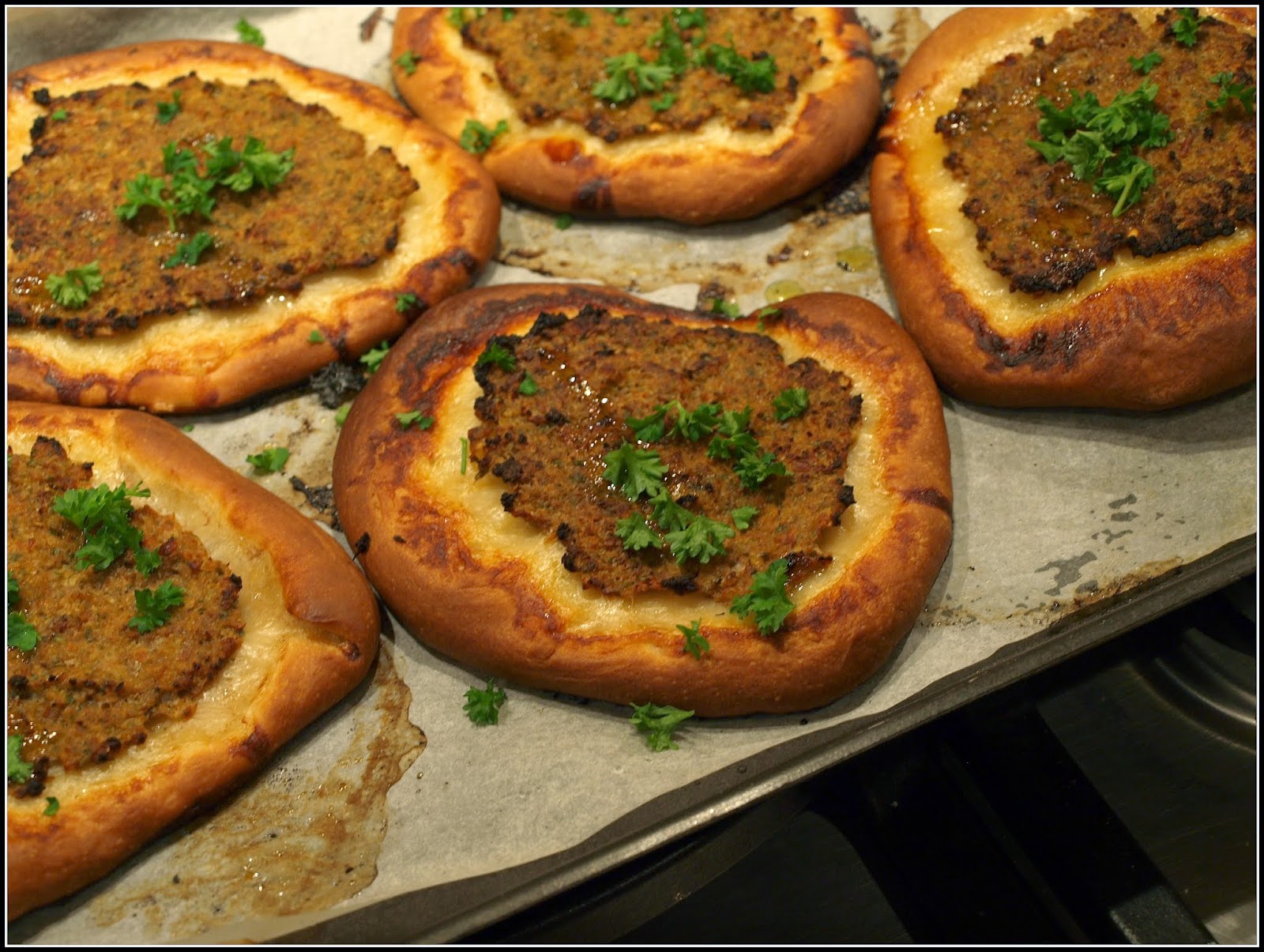 As you can see, the edges went nicely brown and crispy. Any more cooking would have made them overdone. However the meat paste gradually contracted as it cooked, revealing a paler less well-done ring of pastry, which made the Lahmacun look less attractive. I think if I had stuck to chopping the meat rather than using the food-processor this would have perhaps been less of a problem, because the meat would have been looser. And of course the dough discs could have been thinner... 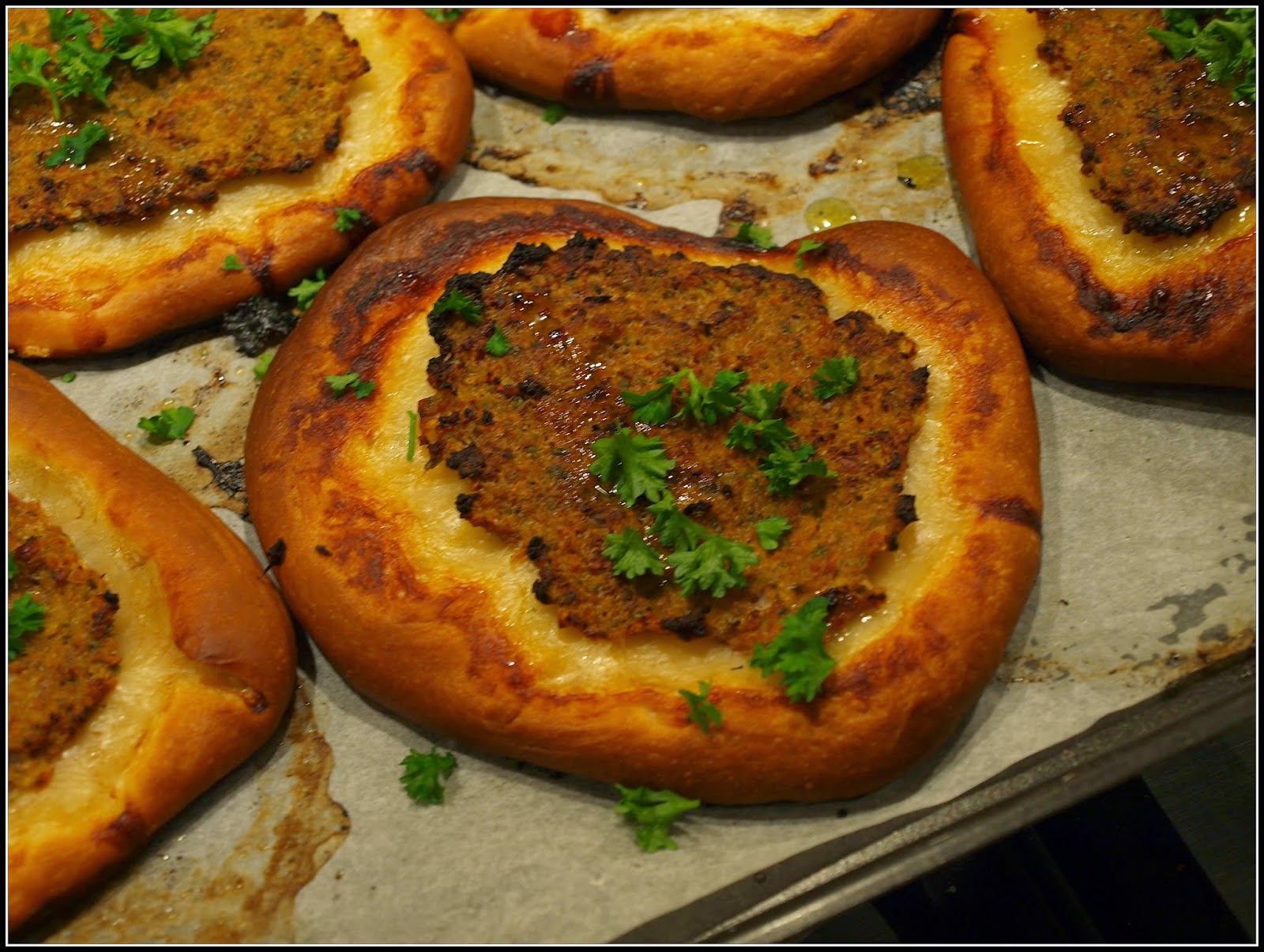 Anyway, they tasted really good, and the texture of the bread was nice too - especially the edge bit. the spicy meat mixture tasted a lot better than it looked, especially with a squeeze of lemon juice!

To accompany the Lahmacun, I served this salad: 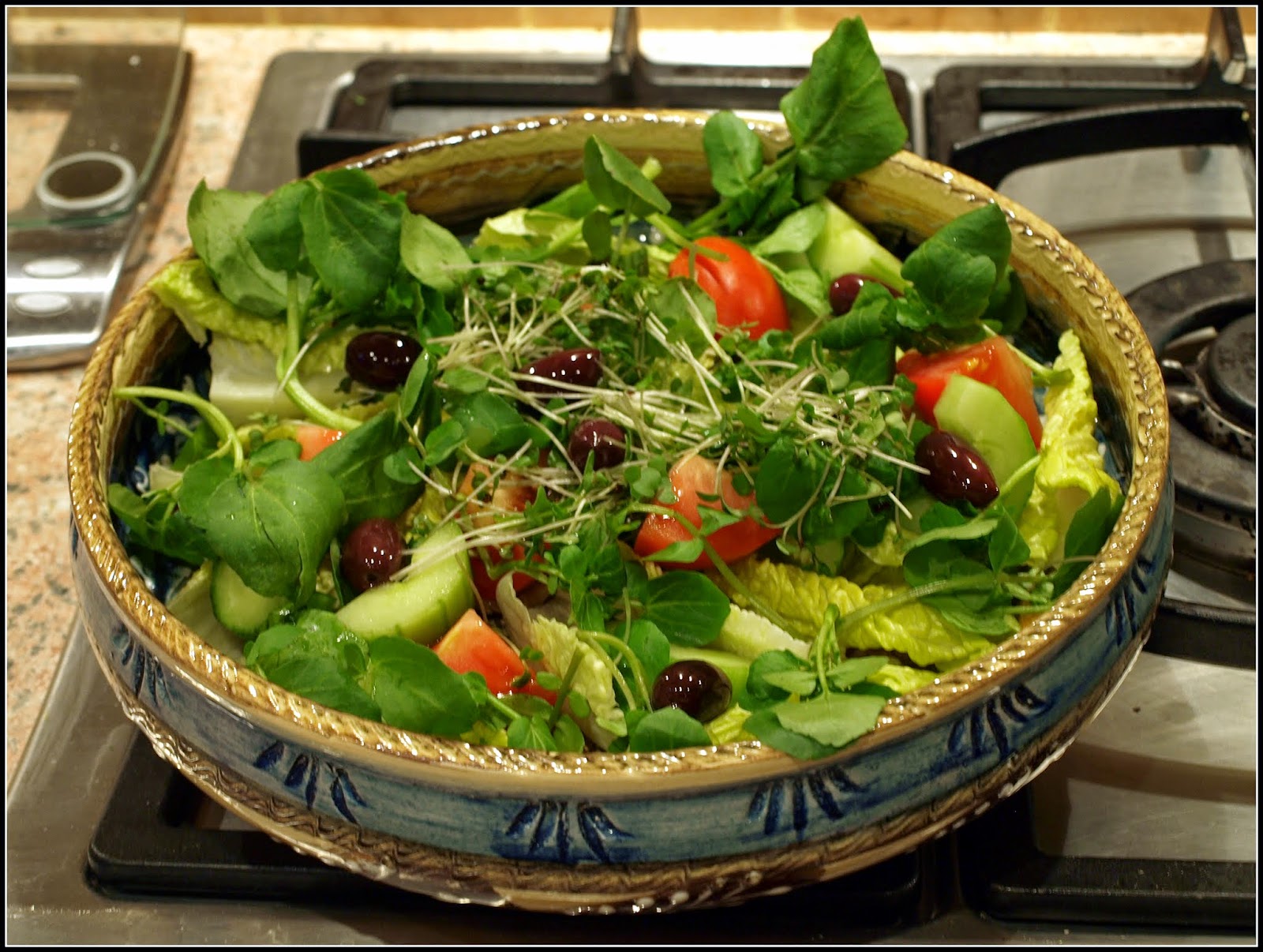 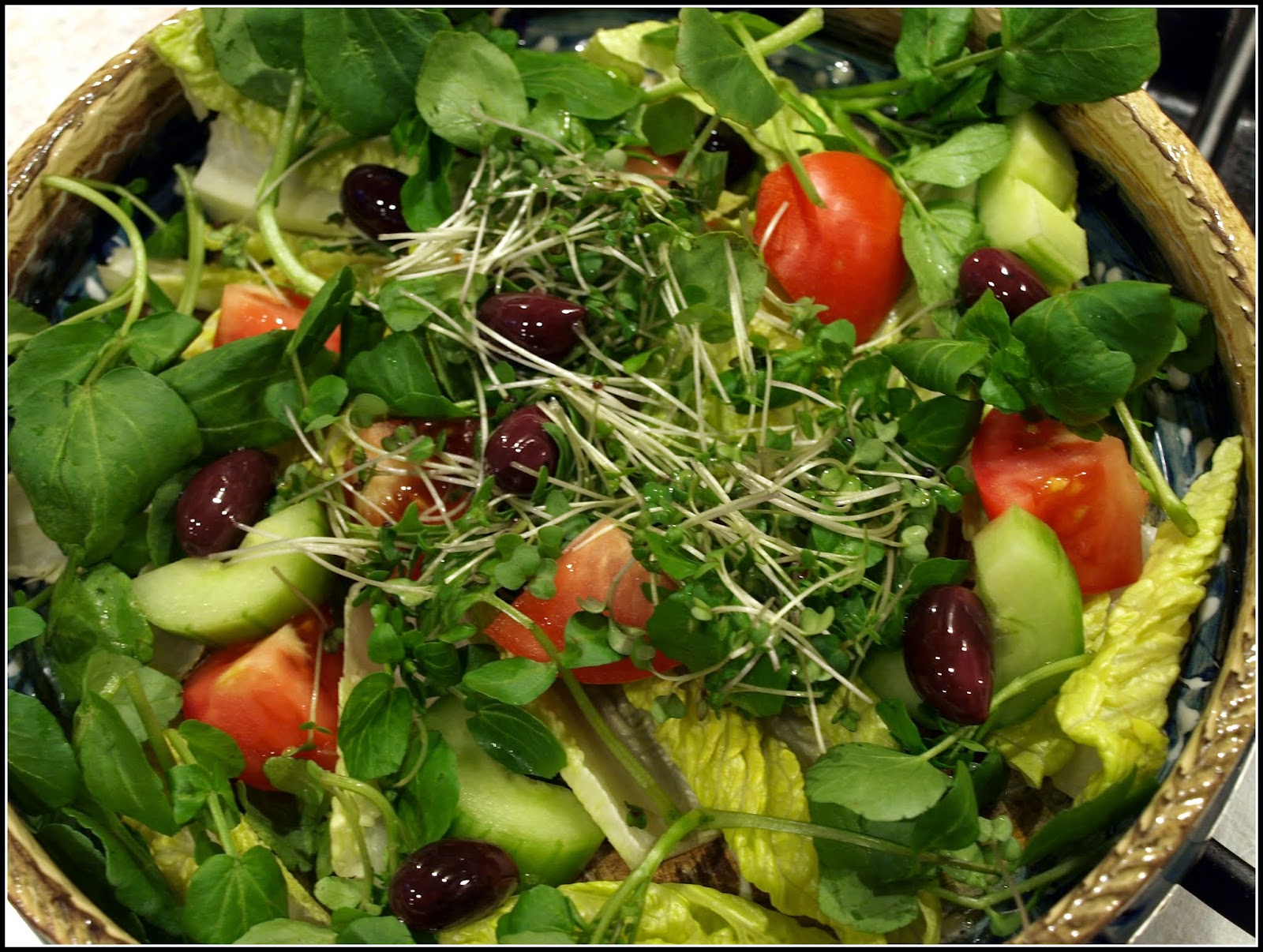 I think I may well make this recipe again, but I have certainly identified two improvements I would want to make:-