With apologies to all my American friends....! I make no claim to any expertise in this area, and I expect my so-called Tex-Mex food is completely un-authentic, but this is what we over here in the UK perceive as the real thing. 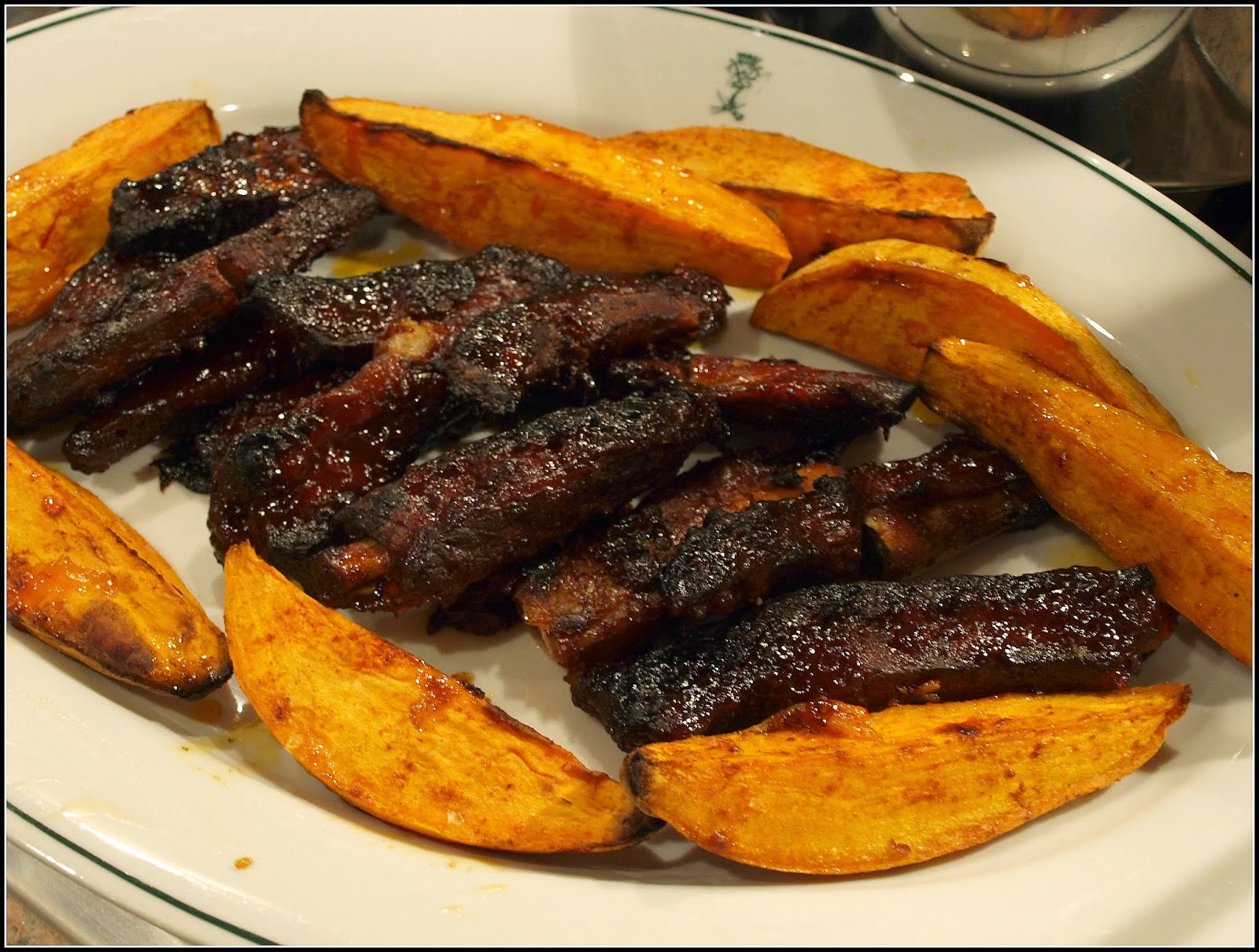 Regular readers know that Jane and I like eating food in styles from all round the world, and I am very keen to broaden my culinary repertoire (making up for years of letting Jane have free rein in the kitchen!). So it is then that when my turn to cook came round again I chose to do something I had not cooked before. This is my menu:

It was a complicated meal. Definitely not the sort of thing to do if you are in a hurry! I'll take you through it one dish at a time...

First the ribs. They were pork ribs, ones with plenty of meat on. I used a recipe for "Spicy Spare Ribs" from Jane's blog Onions and Paper, substituting more appropriate flavourings for the Oriental ones she used. The ribs were boiled for an hour, in water flavoured with onions, garlic, carrots, ginger, cumin seeds and a dried chilli. After cooling, I smothered them in (commercial) hickory-flavoured barbecue sauce and left them to marinate for four hours. I strained the stock and saved it for use another day.

Later, the ribs were roasted in the oven (200C fan) for 45 minutes. They came out lovely and sticky, and the meat was "melt in the mouth" tender.


The Sweet Potatoes were the easiest part of the meal - peel, slice, smother in oil, sprinkle with salt, pepper and a light dusting of paprika, and then roast alongside the ribs. 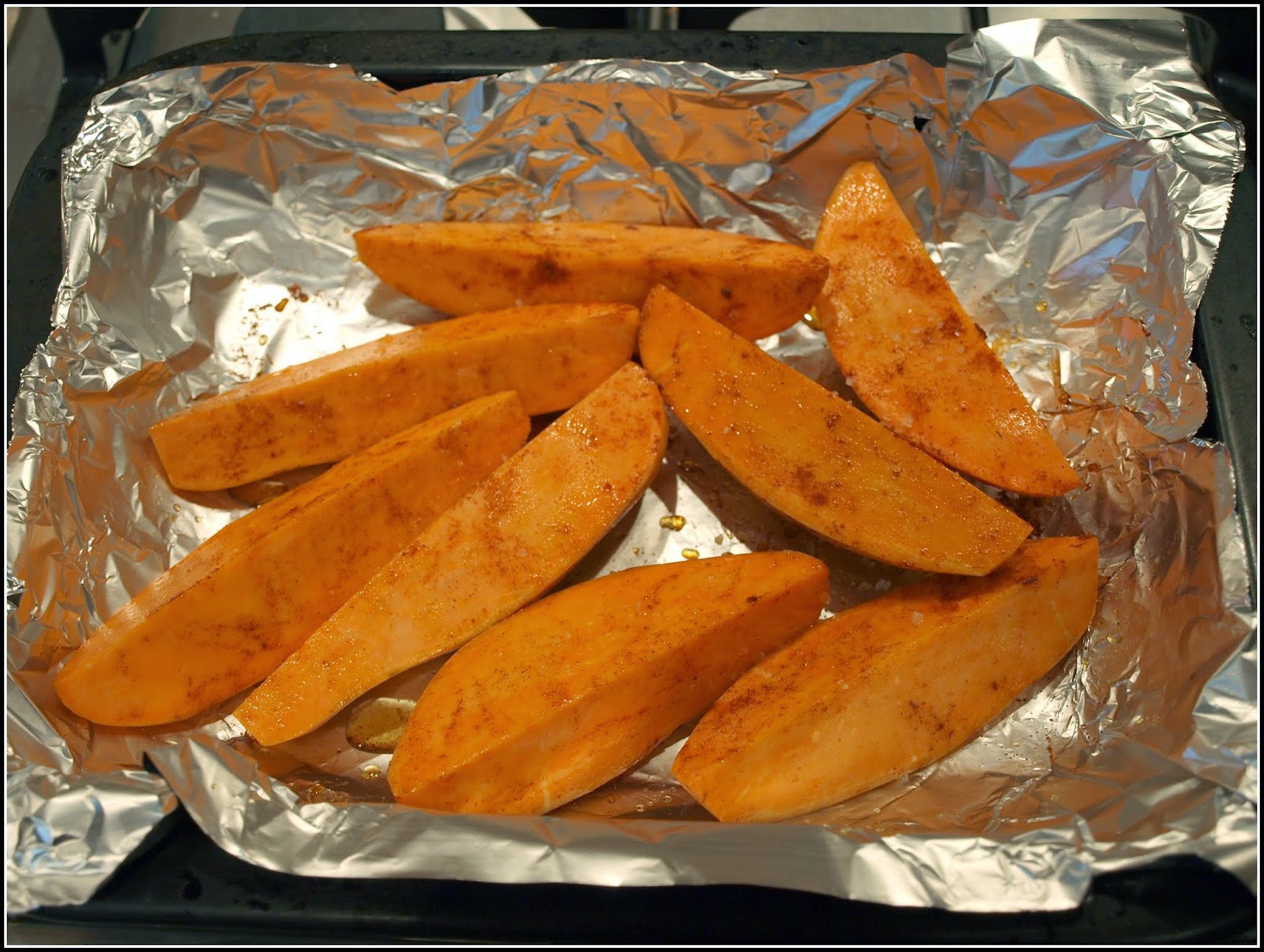 To accompany the Sweet Potato I made some Chipotle Mayonnaise, using dried chipotles that had been soaked in warm water for a couple of hours. The mayo was made "from scratch", not from a jar! 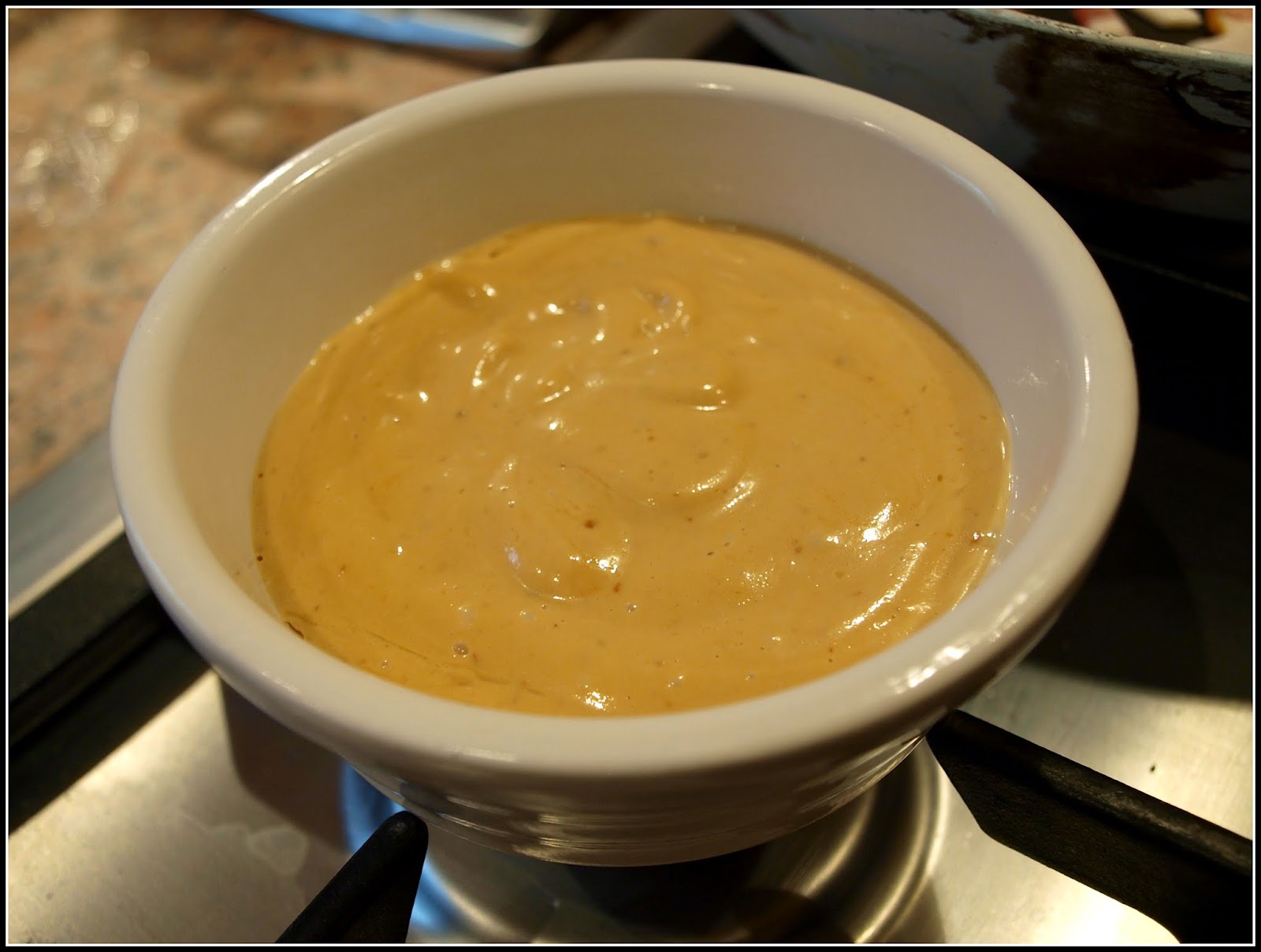 I could have eaten the mayonnaise on its own (maybe just with a tortilla....)! It had a beautiful silky texture and the chipotle chilli imparted its characteristic warmth and slight smokiness.

Now the "Frijoles Refritos". As Wikipedia kindly informs us, this is a complete misnomer. The beans are NOT re-fried. They are "well" fried. Let me tell you - Refried Beans taste an awful lot nicer than they look! They are really good spread onto a corn tortilla.

This is where they started - a jar full of mixed dried (home-grown) beans from last year, soaked overnight. 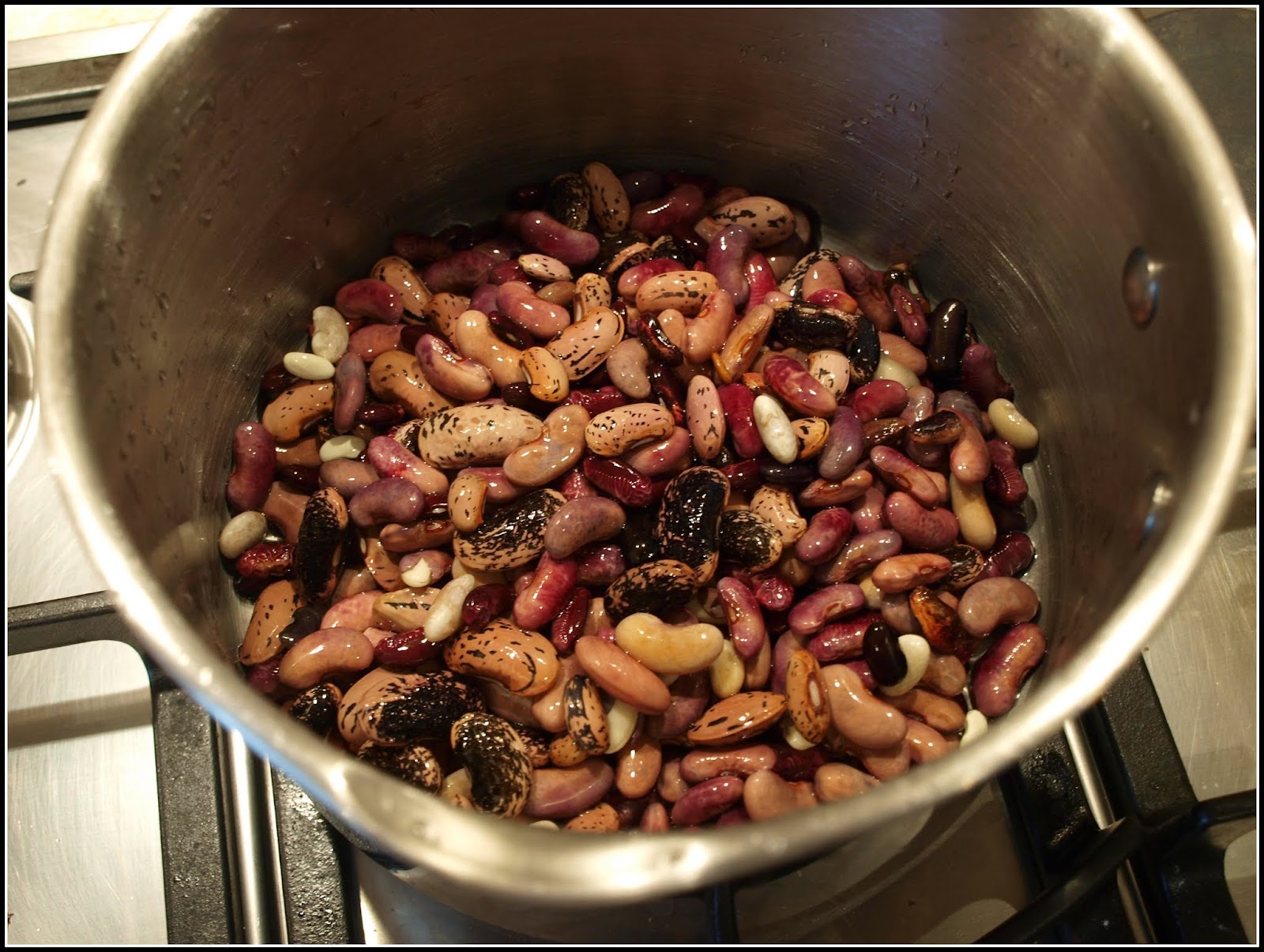 They were cooked until soft and then blitzed to a paste in the food-processor. I initially tried passing them through a sieve, as recommended in several recipes I had read, but this proved to be VERY laborious, and would have removed most of the texture (and beneficial fibre). 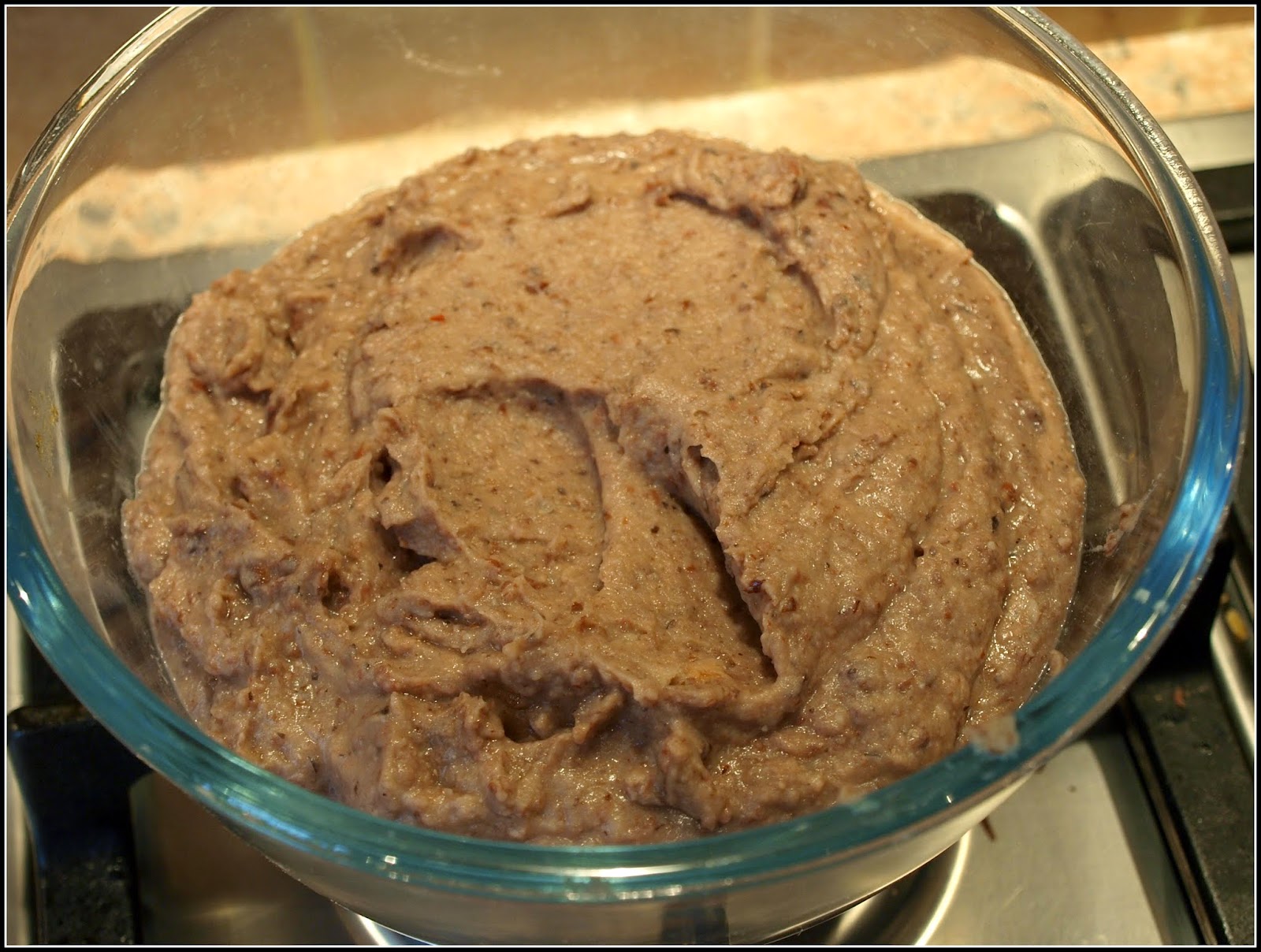 Later, the paste was cooked (really just to warm it) in lard along with some diced streaky bacon. I had been intending to add some flavourings (maybe some Cumin powder; maybe some Chilli powder?) but to be honest, in the heat of the moment I forgot. Anyway, the end result looked like this:


As I said, it tastes a lot nicer than it looks!

My tortillas were a big improvement on last time I made them. I got the texture of the masa just right. Look, when I squashed a golf-ball-sized piece of it in the tortilla-press it stuck to the top part and didn't fall apart when I pulled it off! In other words, the dough had just the right amount of elasticity.


In order to make it easier to get the tortilla away from the tortilla-press I lightly greased both surfaces of the press each time with a tiny amount of vegetable oil, applied with a piece of kitchen paper. It worked well.

This is a tortilla cooking on the cast-iron comal / tava: 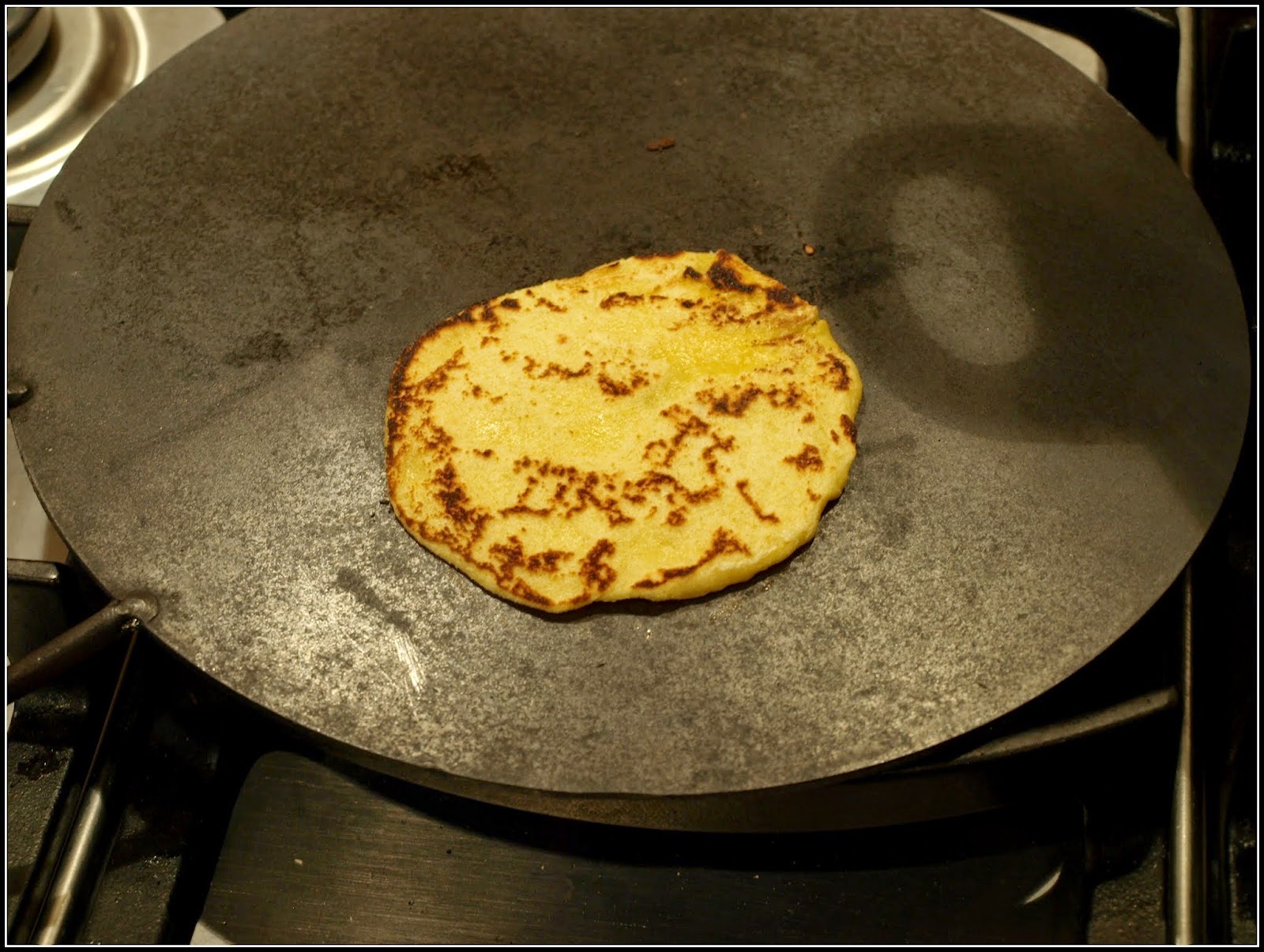 I also had a good system for keeping the tortillas warm and soft. As they were cooked, they were placed in a vegetable-steamer, lined with clean tea-towels, sitting over a saucepan of simmering water.

﻿
This is a technique adapted from advice given to me by Daphne Gould (who writes Daphne's Dandelions). Thanks, Daphne, it was a great help.

I did also make a salad. It was pretty basic by our standards: shredded Iceberg lettuce, chopped tomato and avocado. Rather unexciting, to be frank. The fact that I didn't photograph it tells you all you need to know. The avocado and tomatoes were particularly disappointing. They looked nice from the outside, but the taste was lacking. Roll on Summer-time and the advent of home-grown tomatoes!

So that was our "Tex-Mex" meal. We put everything on low tables between the two of us and just tucked in to a bit of this and then a bit of that, topping-up our plates several times. What do you think? Does it sound like something you would enjoy? And, my American friends, does it sound at all Tex-Mex???
Posted by Mark Willis at 12:00