During the Winter my Landcress delivered a small but frequent and tasty harvest, which was especially welcome in the absence of most other crops. But all good things come to an end and that time has come for the Landcress. After it reaches a certain point the leaves become tough, stringy and overpoweringly peppery. Furthermore the plants run to seed, putting up tall flower spikes: 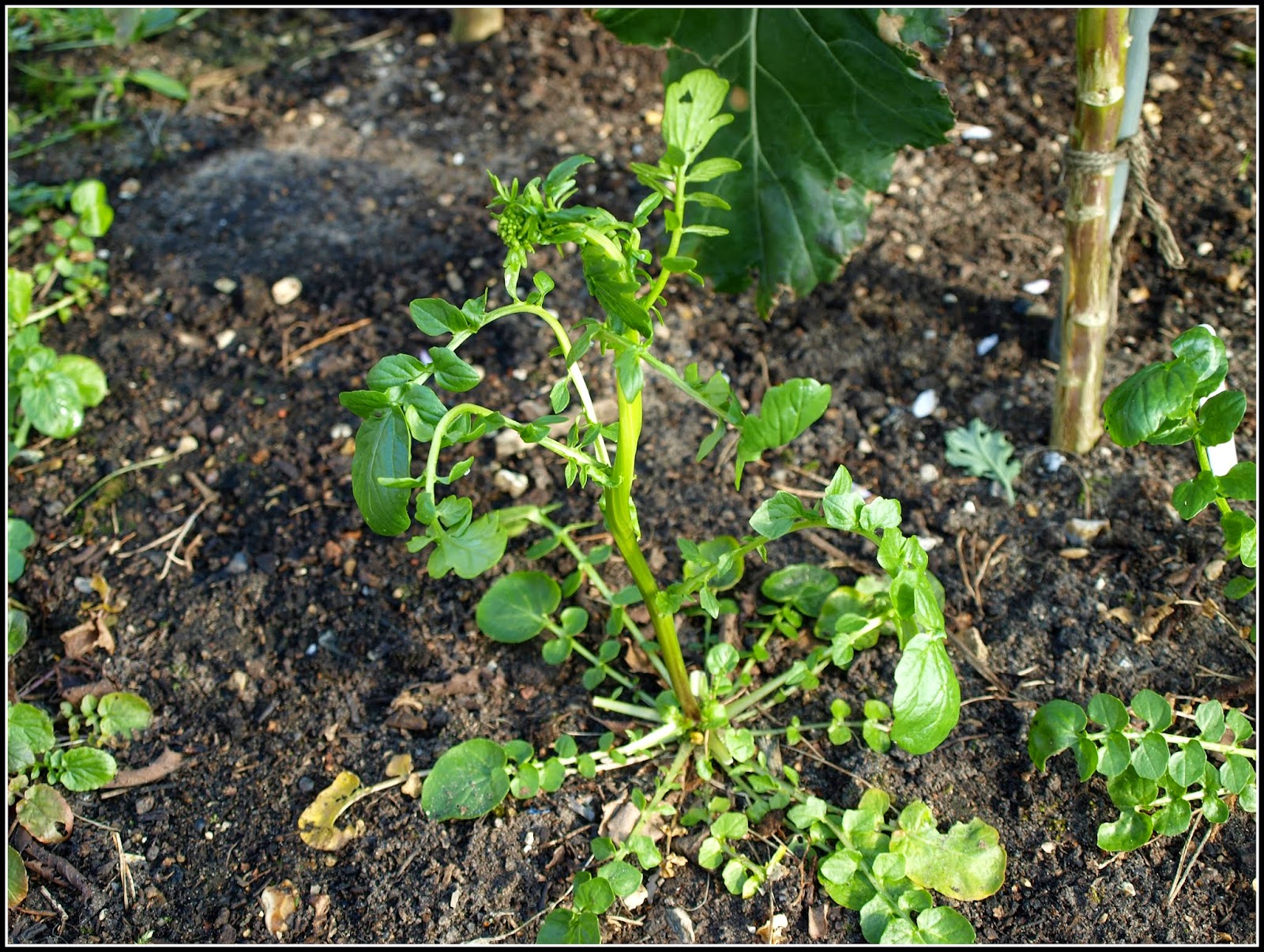 Most of the plants have produced a single flower-stalk, but the bigger ones have put up several. 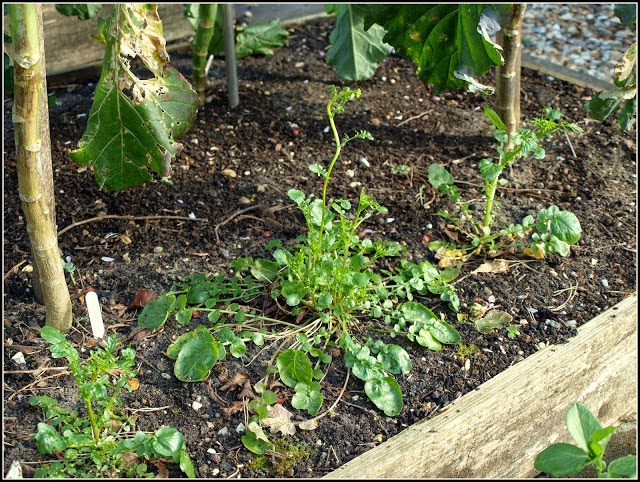 If I left the flowers to open and eventually mature, I'm sure I could easily establish a self-generating patch of Landcress, but these plants are in one of the raised beds, which I now want to use for Runner Beans, so they have been dug up. In the late Summer I will probably sow another batch. 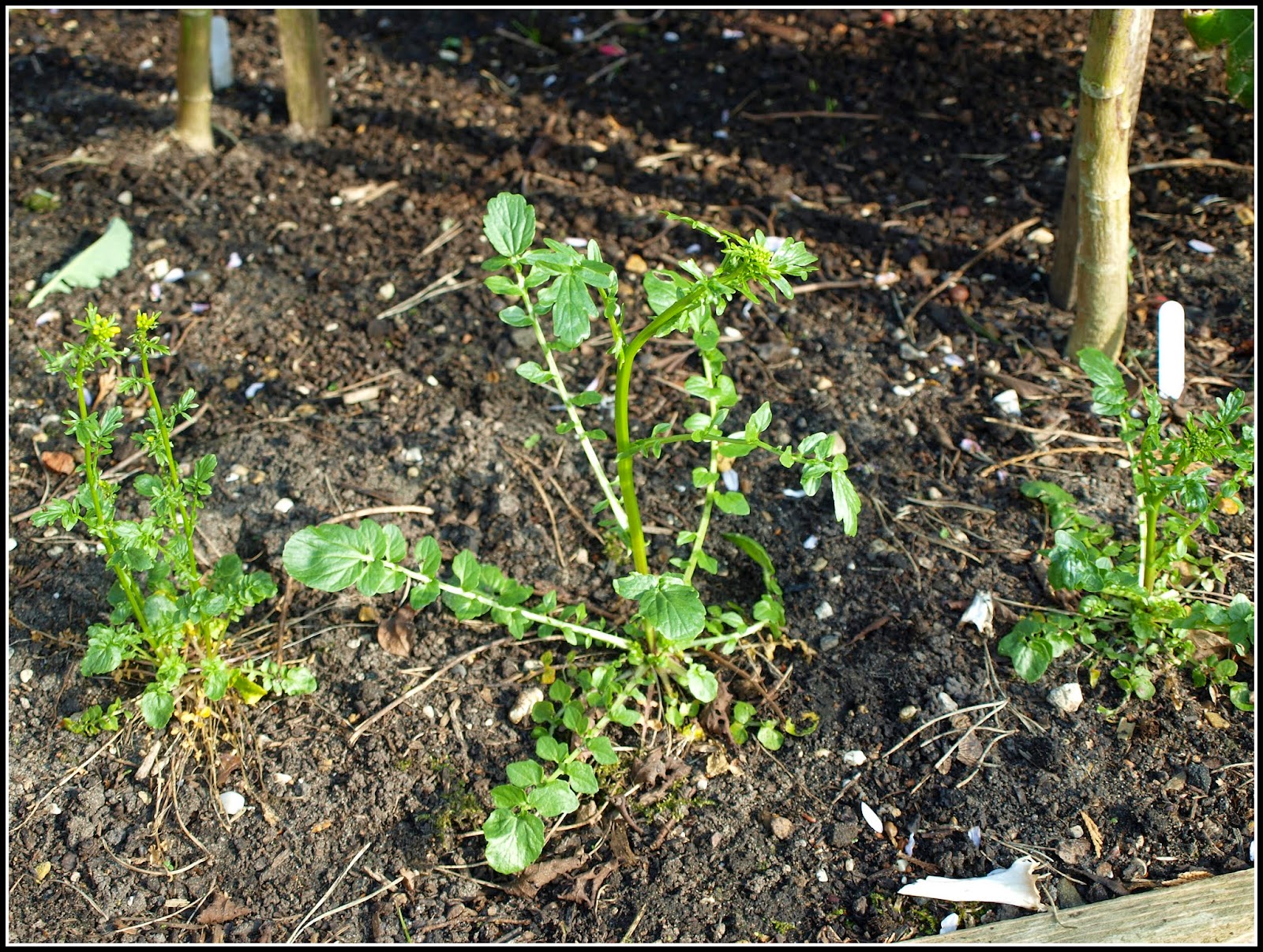 In other news, the Horseradish has popped up: 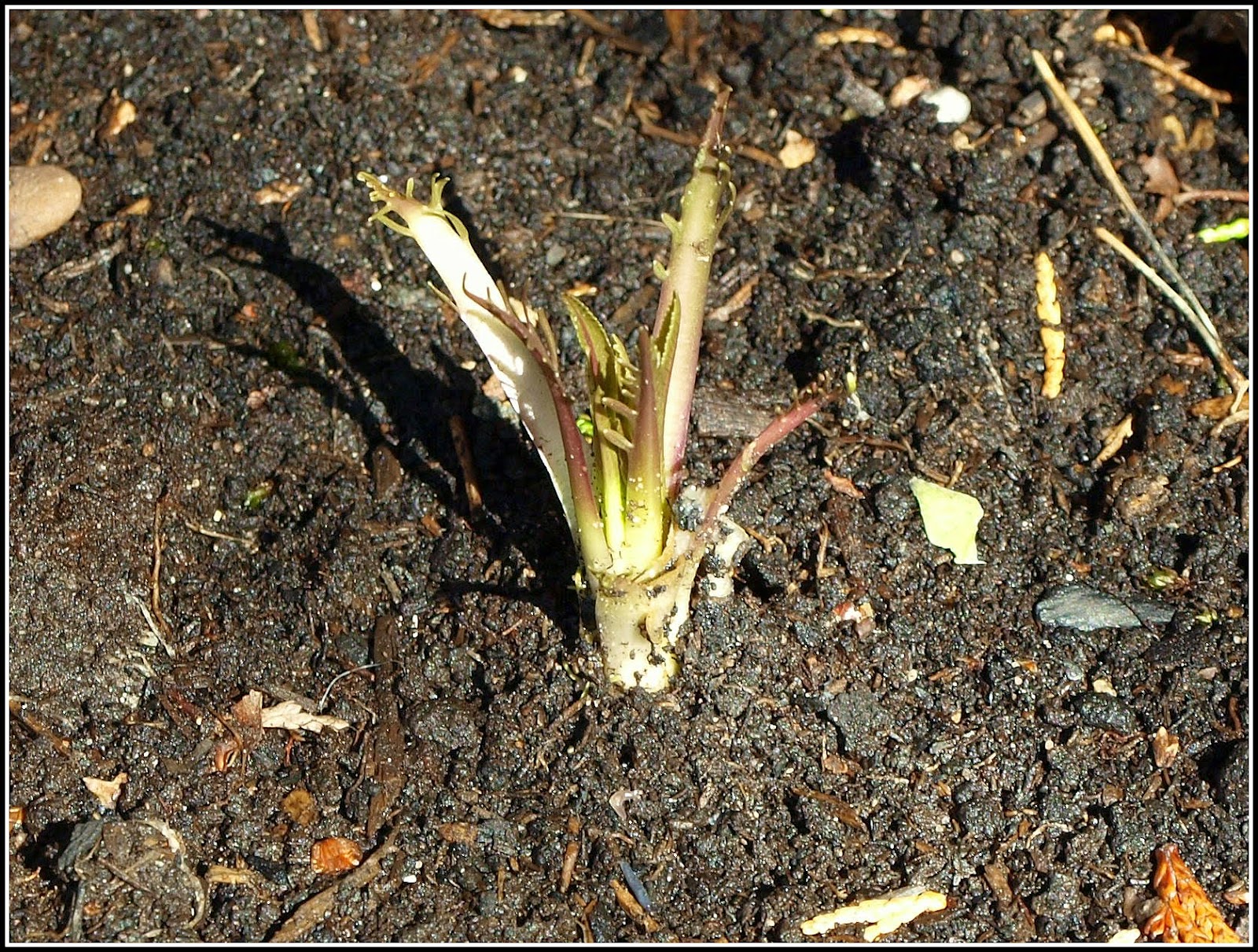 Some of you may recall that last Autumn while I was foraging the hedgerows for fruit I found some Horseradish growing in the verge at the side of a country lane, and brought some of it home. Most of it was made into Horseradish Sauce and eaten soon after, but one promising bit was planted, and this has evidently made it through the Winter. Friends have warned me that Horseradish is very invasive, so I have made sure to plant it in a place where it can be easily contained and I will take steps to ensure it never gets out of hand!

That place is right at the bottom of the garden, between two compost bins. I am also trying to establish there a patch of Comfrey: 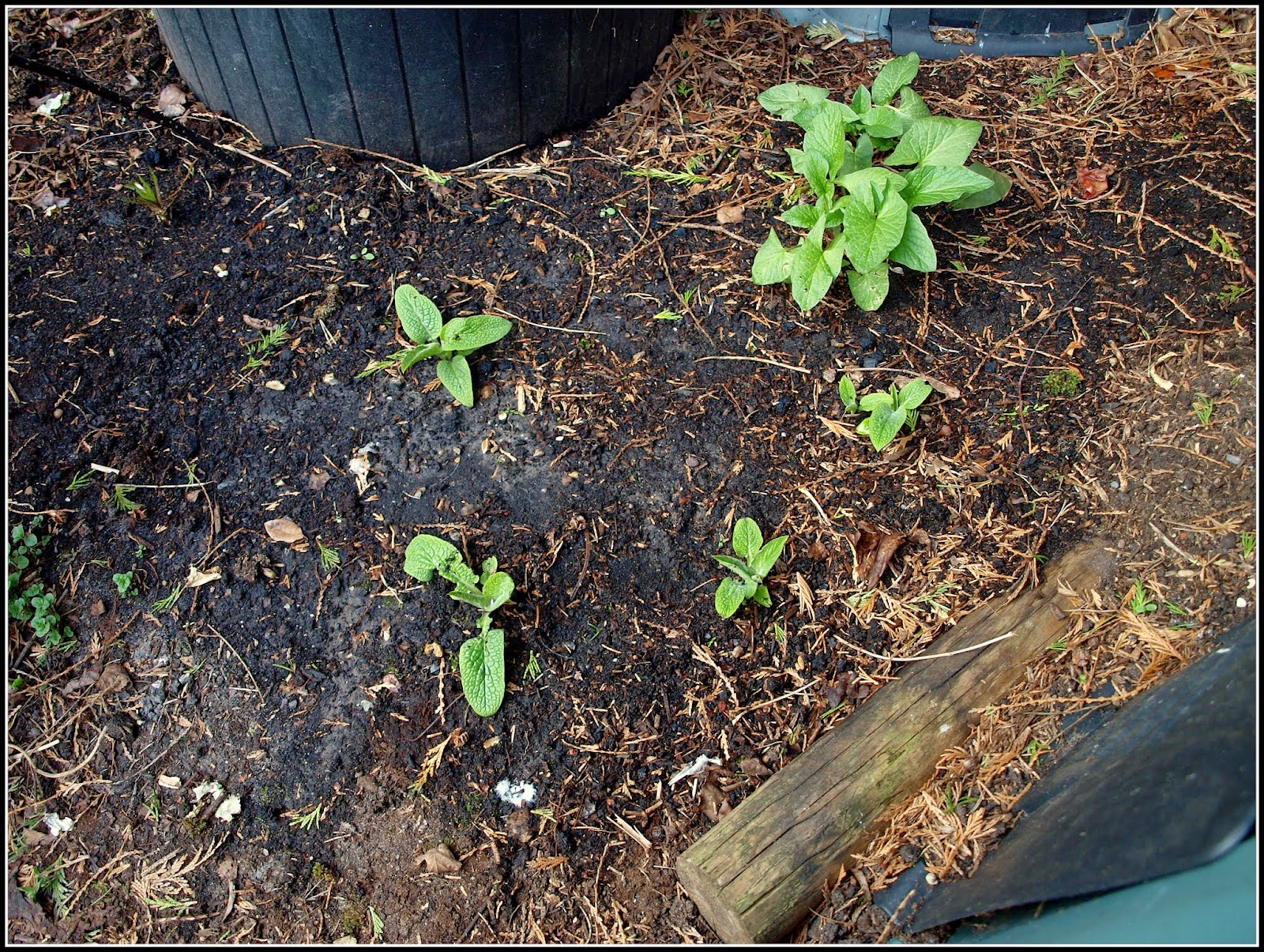 In these photos you can see four heads of Comfrey peeping through, as well as a small clump of Good King Henry (top right). 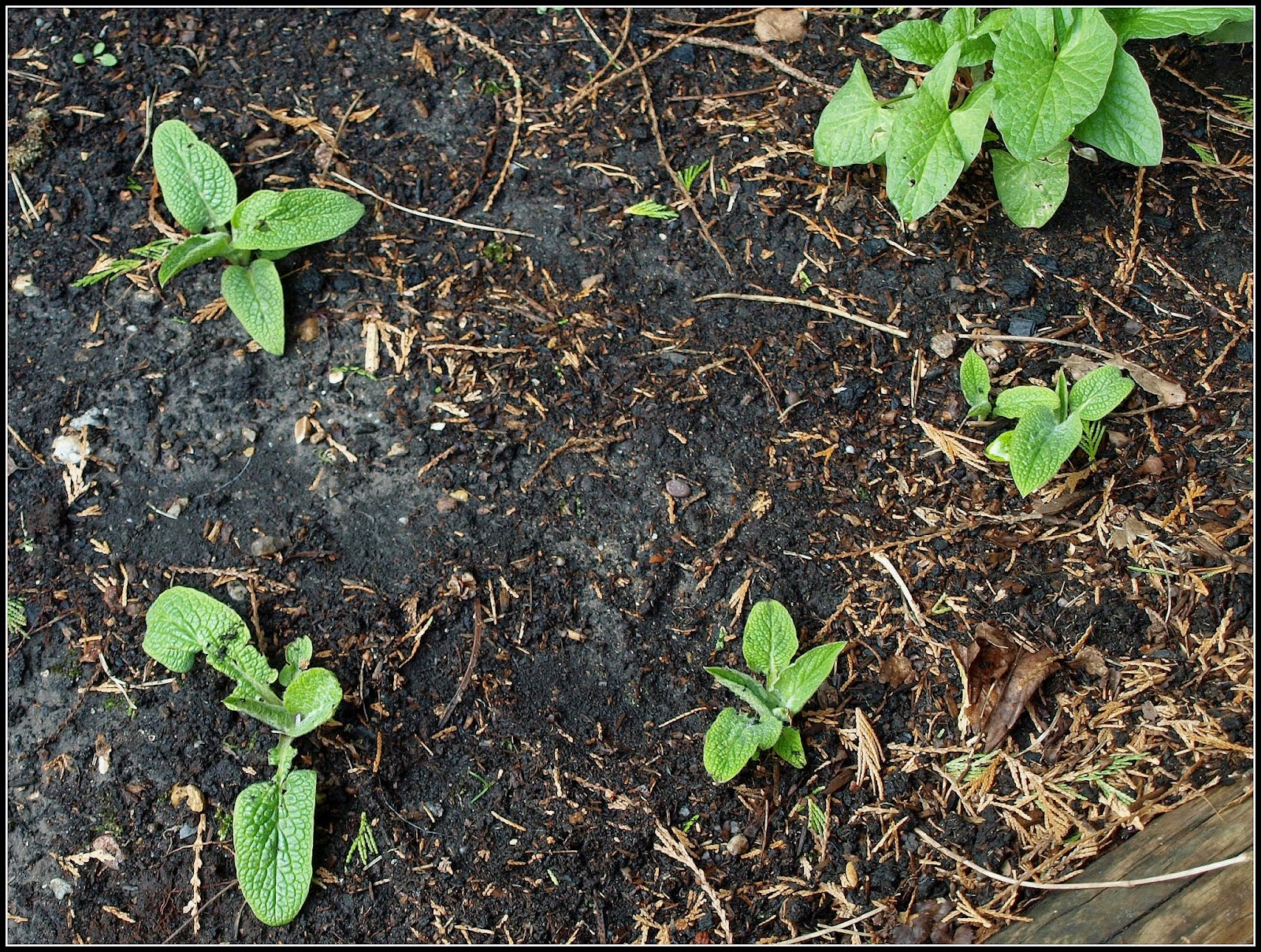 You can probably tell that at the time when I took those photos I had just watered this area. That is because I want the Comfrey to quickly grow big and strong so that I can harvest it to make plant-food with its leaves. I would like to get at least two crops within the year.
Posted by Mark Willis at 12:00