So far, what I have written about our recent Danube "cruise" has been mostly about the river and the various historical monuments we visited. In this post I want to describe some of the food- and gardening-related things I saw / experienced.

I have already posted an album of photos of the Budapest market called the Nagy Vasarcsarnot, on my Facebook page, which some of you will have seen, but I'll use a few of the photos here to illustrate my post... 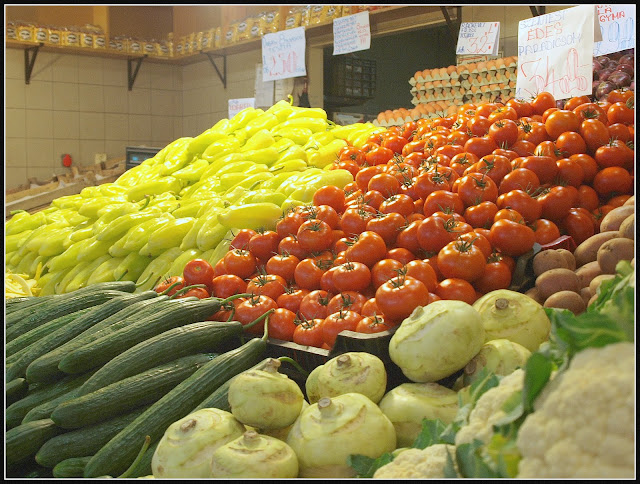 Well where do I start? The tour company that owns the ships we were on is a French one, and we had therefore built up some high expectations about the quality of food we would get. As it happens, the standard of the food we were served was quite variable - some of the meals were very nice indeed, and some were in our opinion rather poor. We were disappointed that both Lunch and Dinner were set-menu meals, with no choice - expect in the case of special dietary requirements. I suppose if we had been seasoned cruising people we might have expected this. I warned them that I didn't eat fish, and I am happy to report that I was provided with an alternative when fish was served, which (surprisingly) was only twice in the week we were aboard ship.

The meal that both Jane and I liked best was the Hungarian Gulyás or Goulash. I draw the line at taking photos of my food in a restaurant, so I don't have any pictures of this dish, but I do have some pictures of paprika, the essential ingredient of goulash and seemingly most other Hungarian dishes. The word "paprika" is a generic one, applied to all forms of the capsicum-style pepper, both hot (i.e. Chillis) and sweet (Sweet Peppers or Bell Peppers):
﻿

﻿In the UK, goulash is normally interpreted as a fairly thick stew, with lots of tomatoes and peppers in it, but the one we were served was definitely a soup - thin but exceptionally clear and tasty beef stock, small pieces of beef meat, diced carrots, onions, and some small pasta-like dumplings (similar to the German spatzle) - and of course powdered paprika. There were no pieces of pepper (capsicum / bell pepper) in it and I think only a few tomatoes. It was absolutely gorgeous, and everybody on our table had two or three helpings. The dish was made all the more attractive by being served in dishes that resembled the traditional cast-iron cauldron or "bogrács" complete with handle for suspending it over the campfire!

In Hungary they evidently enjoy eating pork. The market was full of stalls selling pork in every conceivable form, both raw and preserved. 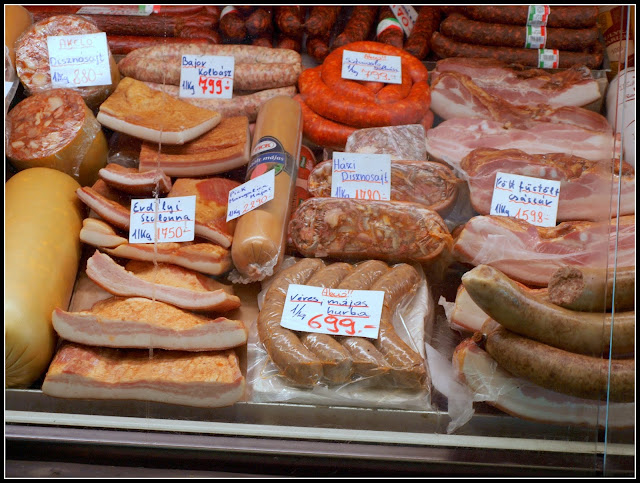 Check out the huge replica salami dangling from the front of this market stall, just like a barber's pole! 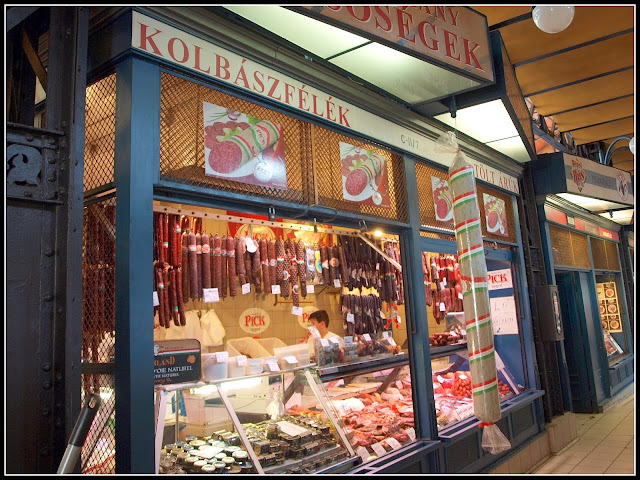 One of our best meals on the trip involved a starter of lettuce, tomatoes and various salami-type sausages. The salami was wonderfully tasty - again flavoured with paprika. Amongst the selection there was a smoked one which was probably my favourite. By the way, I think the key to enjoying salami like that is to have it sliced wafer-thin, something which is hard to achieve at home. You really need a machine to do it properly!


On a couple of occasions we had at breakfast-time some sliced Watermelon, which probably came from the market I visited, which was only about 250 metres from where the ship was moored. How is it that we can never get Watermelon like this in the UK? The ones we buy are always anaemic and crunchy like a cucumber, whereas they ought to be a deep red colour, soft and sweet... 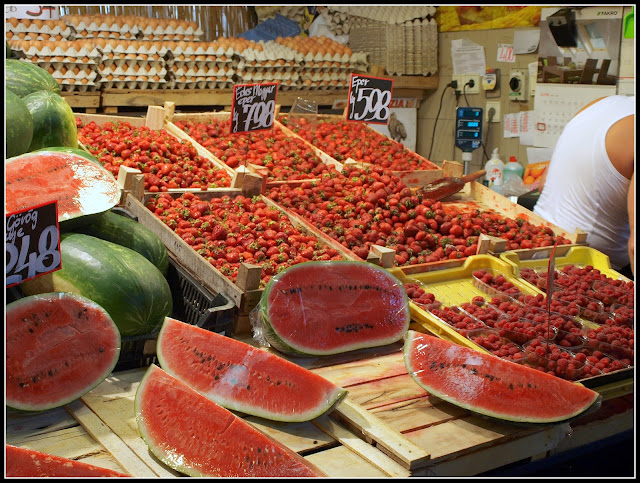 Another typically Hungarian product we tried a couple of times was a fruit-flavoured brandy called "Palinka" - very much like the German schnapps. The most popular flavour appeared to be Apricot, but Apple, Pear, Plum, Blueberry, Peach and Cherry flavours were widely available. 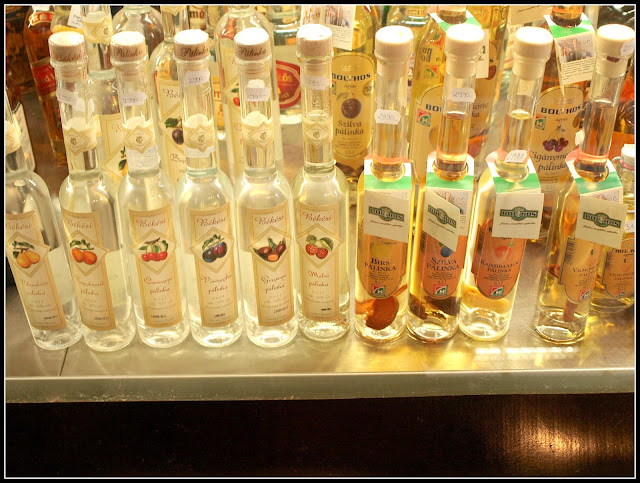 Palinka is apparently best served in a tulip-shaped glass so that the aromas are concentrated near the drinker's nose. In the market I even saw a glass with a lid - presumably to ensure that the precious alcohol doesn't evaporate between sips! 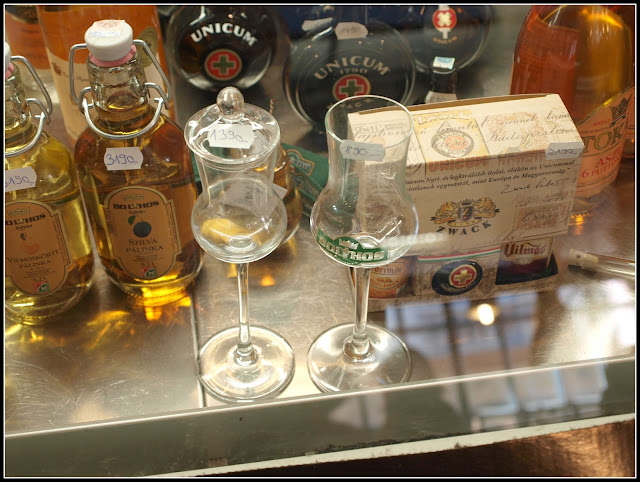 When we visited the horse-farm mentioned in Part 3 we were greeted on arrival in traditional fashion with a glass of palinka and a little loaf of very salty bread described (rather inappropriately) as a brioche. The palinka was fine (though probably not the best thing to drink at midday when the temperature is 35C), but the bread was far too salty to be enjoyable.

We also tried some Hungarian Tokay wine. This is made from a grape variety which takes the name of the place where it orginates - the Tokay or Tokaji region. We found it rather too sweet for our liking, when served as an aperitif, though it would probably be nice as a dessert wine, with some ripe peaches or pears.

I think that is about all I can write about food that we encountered that was distinctively Hungarian, so let me now show you a few photos of plants...

In general, the plants we saw were not very different to those we here in the UK are familiar with,  like these:- 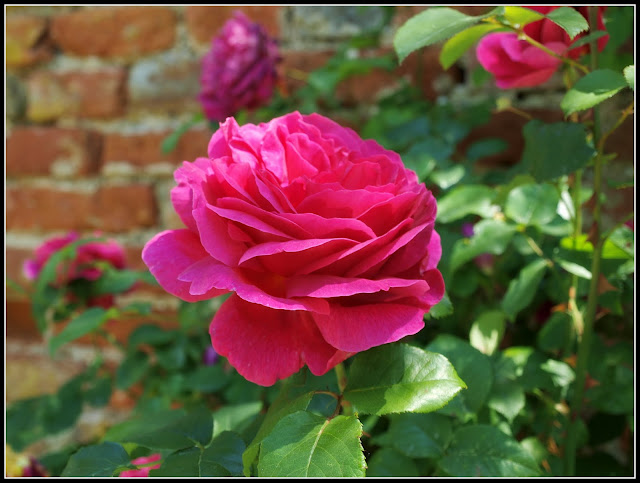 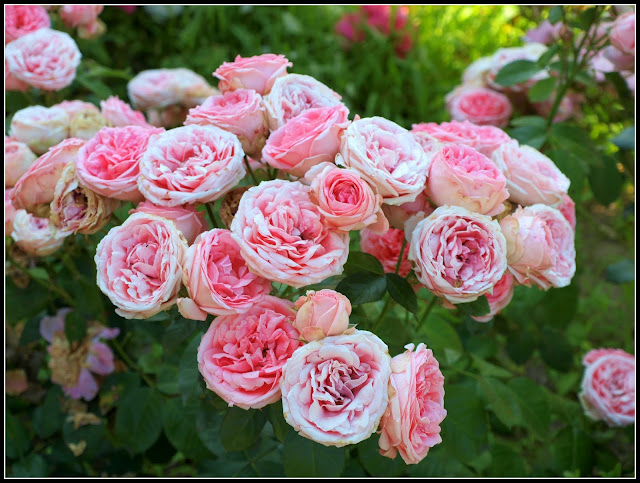 But I don't think I have ever seen a Crab Apple as dark-coloured as this one: 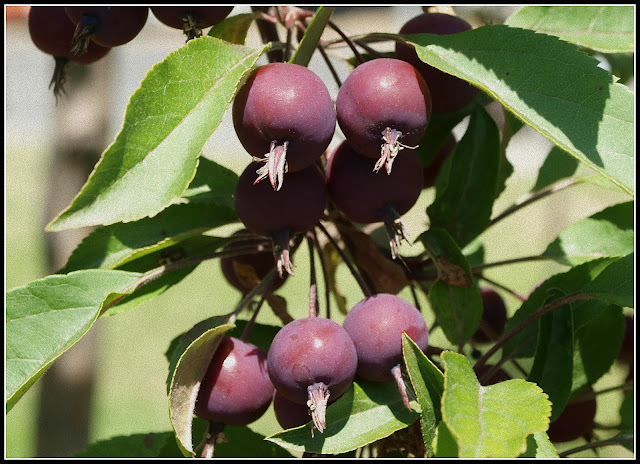 At first I thought it was a cherry!

Everywhere you looked there were Lime (aka Linden) trees, and we saw lots of people collecting their flowers to make a sort of tea or tisane. I understand that there are two basic types of Lime tree, one of which is good for making tea, and one of which isn't. I don't know which type this is... 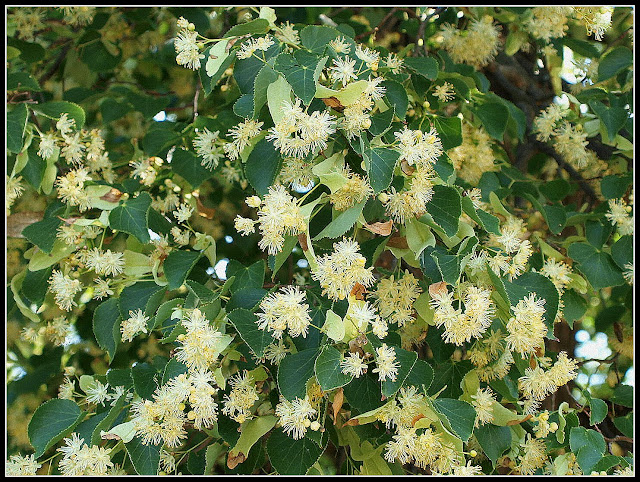 These too are not common in the UK - Mirabelles (a member of the plum family), often used to make a very nice liqueur. 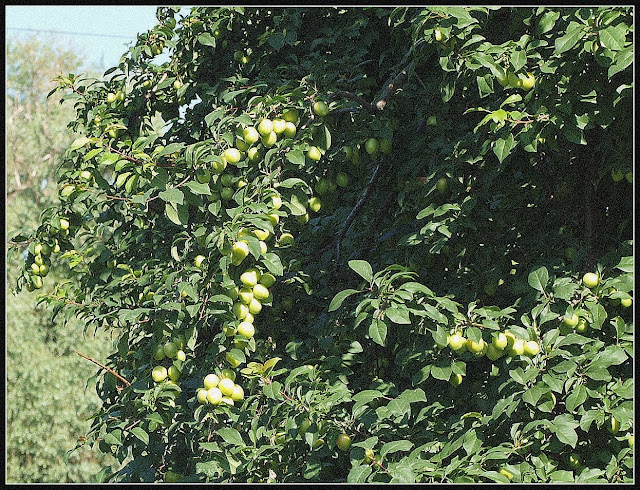 I'm afraid that most of my pictures are not so good, because of the exceptionally bright conditions (to which I am not used, because we seldom get light like this in the UK!). However, I was lucky with this one - a majestic Stag Beetle, spotted lurking in the shadows at Esztergom:- 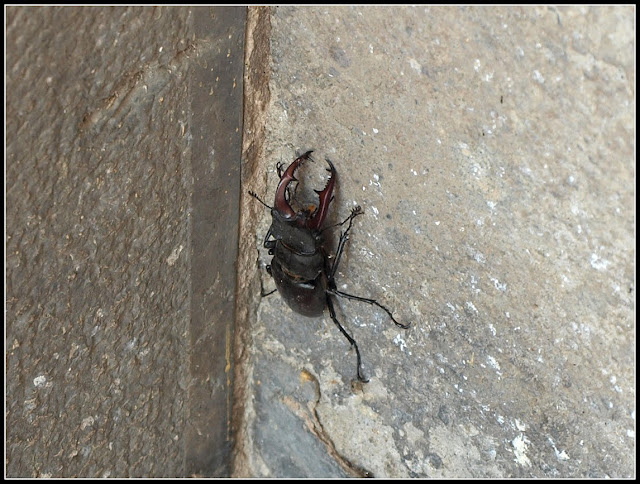 And this rather bedraggled butterfly: 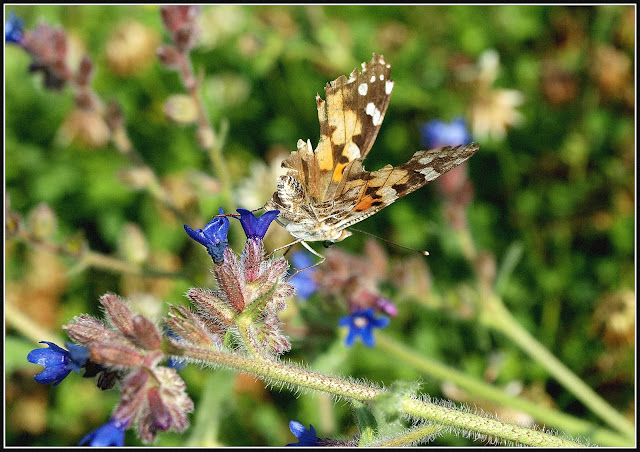 And these energetic bees... 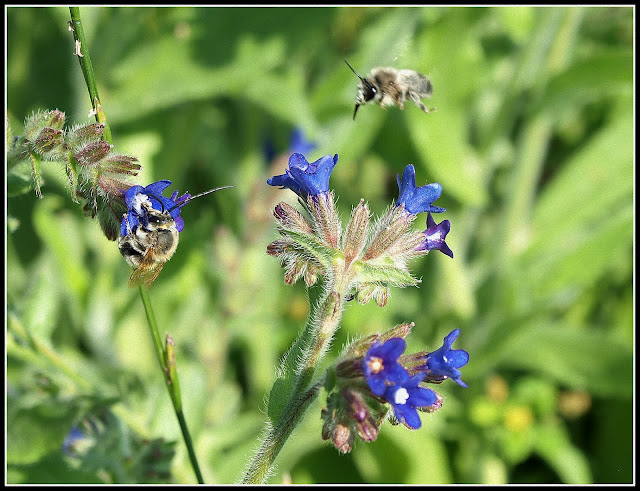 ﻿
Finally, a couple of pics of the Goulash that Jane made a couple of days ago with the paprika we bought in the Budapest market: 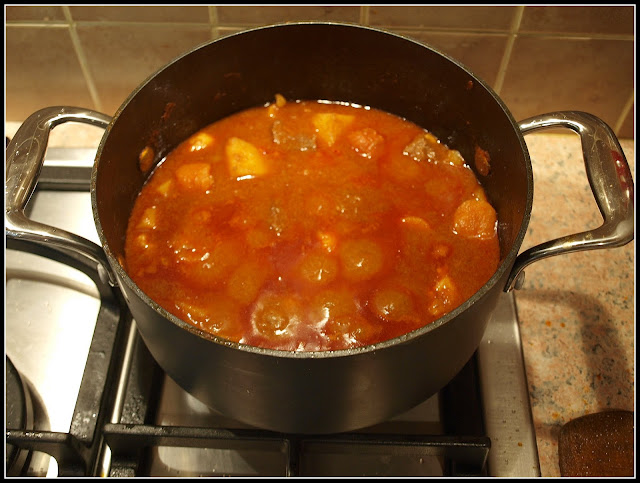 Jane's version has potatoes added towards the end of cooking time, to give the dish some extra carbohydrate. This time she used the sweet version of the paprika, but I think I have persuaded her to use the hot one next time! :) 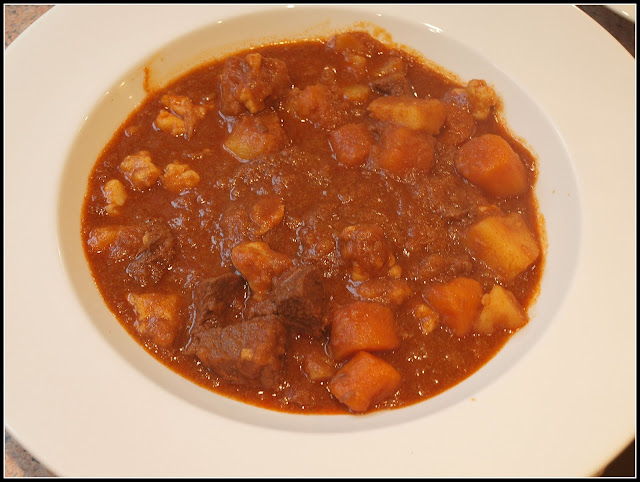