I feel as if I have REALLY made a start on sowing now - I have sown my peas and Broad Beans.

I hate to see my raised beds sitting empty, but I know that sowing seeds too early is a waste of time, so I have just had to be patient. Saturday was a nice fine day for us, and I finally deemed the soil to be "workable"  - i.e. reasonably warm and dry enough to crumble and not form soggy lumps when raked - so I decided to sow my peas and Broad Beans.

First task was to prepare the soil. I raked it over, breaking down the lumps and removing all the bigger pieces of twig deposited during the compost-distribution the other day, and then levelled it down, creating what gardeners call "a fine tilth" of small soil crumbs. Much of this work had already been done for me by the Blackbirds scratching around in the new compost looking for insects. A useful aid here is a garden sieve or "riddle". Mine is made of sturdy plastic, and has holes about 1cm square. 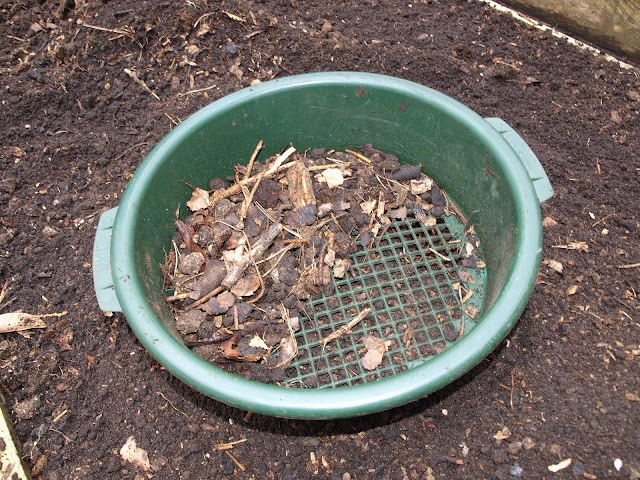 I then erected the support system for my peas. I use this every year, but since I employ a crop-rotation system, the pea-supports have to be erected in a different bed each year. I put in two hardwood stakes about 1.8 metres / 6 feet tall, hammering them in with a 4lb club hammer so that they are really secure. I then stretch between the two posts a piece of chicken-wire, and secure this to the posts with several lengths of wire garden-tie. The final step is to put in three bamboo canes, woven into the chicken-wire and then pushed a few inches into the soil surface. This gives the structure added rigidity. This is what the finished article looks like:- 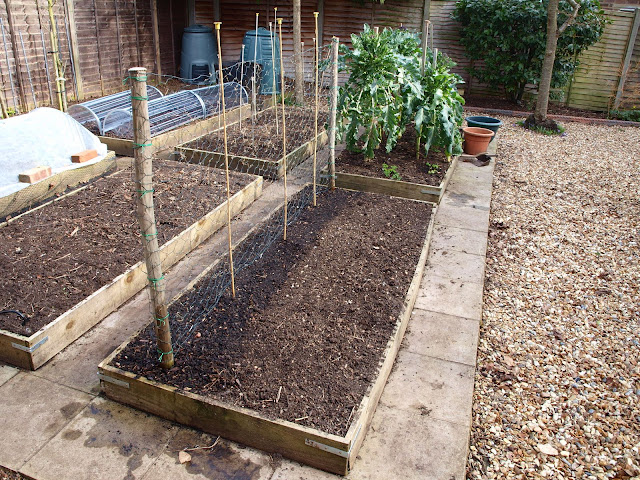 So, with the support sytem in place I moved on to sowing the peas. I "took out a shallow drill", along the line of the chicken-wire, using my onion-hoe. In other words I made a little trench, about two inches deep and about 4 inches wide. Into this I placed the peas. I do this by hand, placing the peas individually. In a bigger garden this would be impractical and very time-consuming, but in my little plot it is a 5-minute job! I sowed a short length (60cm) of each of four types of pea: Misty, Ambassador, Early Onward, and Kelvedon Wonder. They are all early varieties, because I will want to plant other things in this bed later in the season so I don't go for successional sowing, but I'm hoping they will mature a few days apart.

I always sow my peas much more thickly than is normally recommended. I would say that in each 60cm section there would be about 50 peas! I know from experience that they won't all survive. Some will not germinate; some will be eaten by mice; some will be dug-up by the blessed Blackbirds, but enough will survive to give me a viable crop. Having placed the peas in the trench it is simply a matter of carefully covering them over with soil and watering them in.

After sowing the peas I sowed two rows of Broad Beans, each one a different variety. This year I have Jubilee Hysor and Imperial Green Longpod. I like to grow more than one variety of each veg because it increases the chances of getting a good crop. One variety may succeed in a year when another variety fails.
My method for sowing the Broad Beans is really simple. Since the seeds are so big, all I do is lay them in a line on the surface of the ground and then push them into the soil with my finger. In each of my rows I sowed 24 beans - i.e. at a spacing of 10cm. I also sowed a couple of extra ones at the end of each row as spares to replace any casualties.

In between the rows of peas and beans I sowed three rows of radishes, which will grow much more rapidly than the legumes and will give me a bonus crop from the same piece of ground. [This is called "catch-cropping" in case you didn't know...]

Final task: protection. Regular readers of my blog will be well aware that I have lots of problems with foxes, so I have covered my newly-sown bed with another large piece of chicken-wire, held in place with some sticks. This will remain in place until the peas and beans are well established. It doesn't look pretty, but it will hopefully have the desired effect! 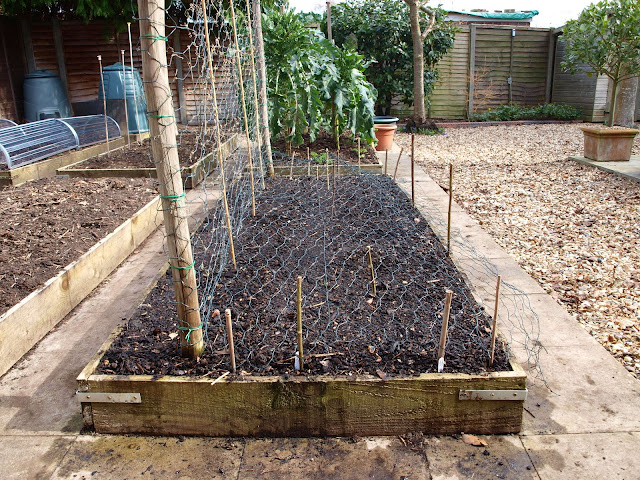 I also prepared one final set of defences: I laid a line of sticks (more prunings from the Philadelphus tree) flat on the surface of the soil, along the line of the wire, where I have sown one of the rows of radishes. This is intended to make it difficult for the Blackbirds to root around in the soil. I know it won't be 100% effective, but it's better than nothing I suppose! 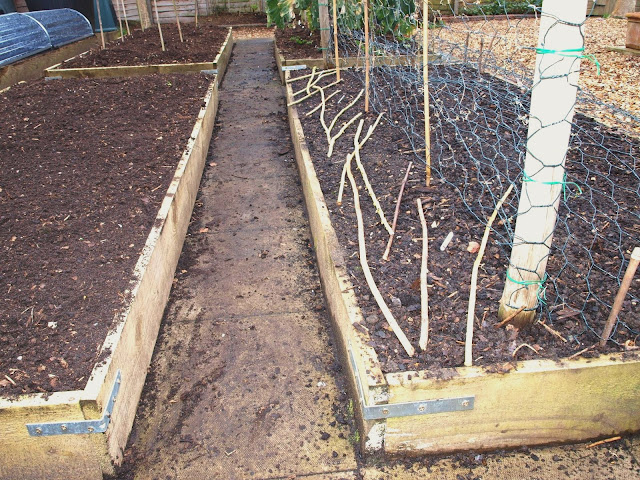 Notice that I also (roughly) swept the paths! How long they will remain this neat is a moot point...﻿
Posted by Mark Willis at 17:30