Today I finally got round to a task that I usually do during the Christmas holidays - distributing my compost. This year the severe weather at Christmas-time meant that it wasn't really practical to do the job at that point, and somehow it slipped further than it should have done down the list of Things To Do.

One of my compost bins is close to the back door, and into this one go all the vegetable scraps from the kitchen, as well as leaves, trimmings, weeds, etc from the garden. The bin fills up only slowly, because the worms do such a good job of digesting the material and converting it into useable compost, but about once a year I "harvest" the good stuff at the bottom of the bin. This is not easy, but this is how I do it: 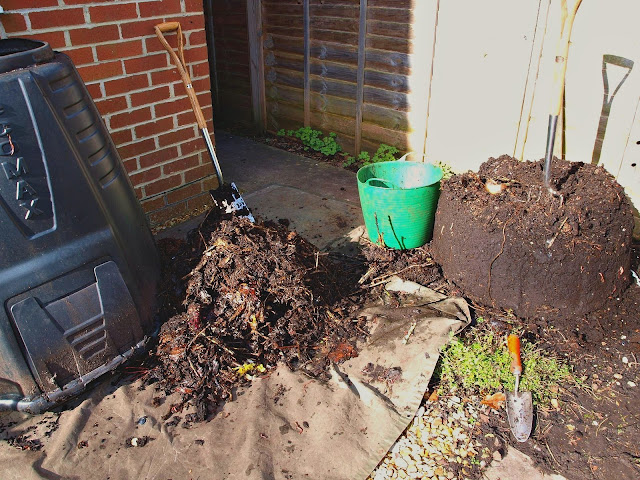 I remove the plastic bin, lifting it off vertically, and fork the top 50% or so of the pile  - which is only partially decomposed - onto an old Army groundsheet laid out nearby. I then shovel the bottom 50% or so (in instalments) into my trusty Trug-Tub and distribute it around the garden, mostly onto the raised beds where I grow my veg. When all the good material is gone, I replace the bin and put back into it the other not-yet-decomposed stuff.

You can see in the picture above that this time there was about a two-foot depth of good crumbly compost.
It was enough for a layer about 2 inches thick on four of my six raised beds, but I was also able to fill my new cucumber-bin. 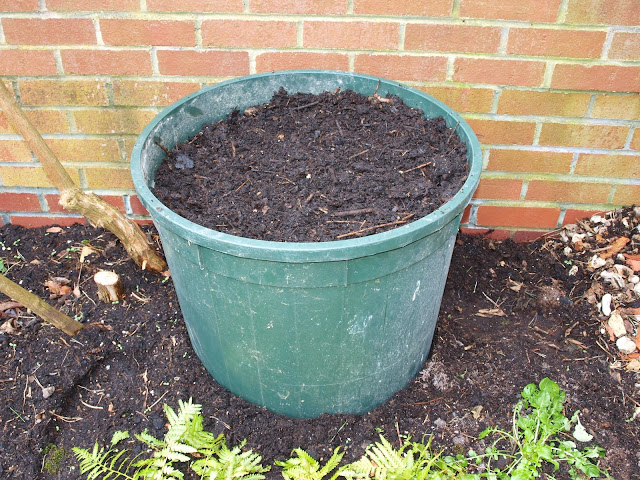 Actually I put quite a lot of the partially-decomposed material into the cucumber bin too, to act as food for the fifty million or so worms that went in there! Even the bottom layer of compost was heavily populated with worms, and the top layer was absolutely HEAVING with them. In this picture you can see lots of little wriggly white baby worms. 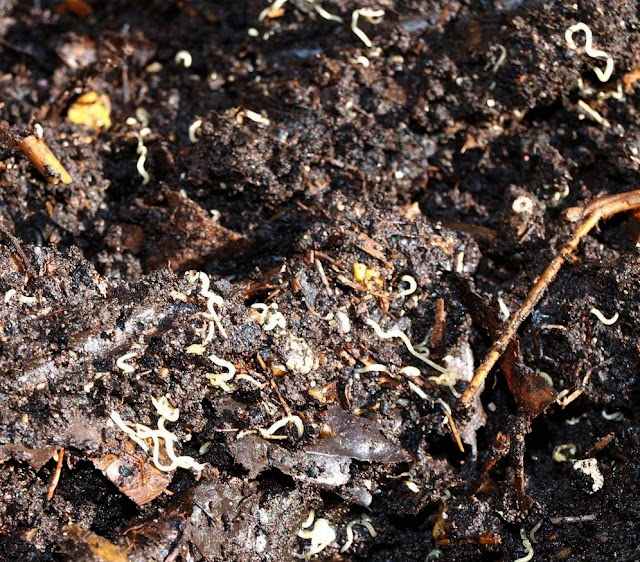 The compost in this bin will now have plenty of opportunity to settle, because I won't be planting out any cucumbers for about two months yet.

I have another compost bin on the go too, which will probably be ready for use in a couple of months, so I plan to put the compost from that one into the raised bed where I will grow my climbing beans. At present this bed is occupied by the Sprouting Broccoli. As soon as the broccoli is finished (probably about the end of April), I will remove the plants and quickly whack in a good dose of  "bulky organic matter" before planting the beans (which I will grow initially in small pots, under cover). With such a small plot at my disposal I have to think very carefully about what goes where, and when. My raised bed system allows me to run a reasonably efficient 5-year crop-rotation regime, but all the beds need a boost of good compost when they can get it, to keep their energy levels up. [One of the six beds is devoted to Asparagus now, so is excluded from the rotation plan.]
Posted by Mark Willis at 17:30