Yesterday I posted about some of the ornamental plants in my garden. Today is the turn of the edible ones.

Down one side of the garden (the South-facing one) I have my fruit trees and my raspberries. The latter are coming up strongly now. They are an Autumn-fruiting variety called "Autumn Bliss". This type bears fruit on the current year's canes, and you cut the canes down to ground level every year. 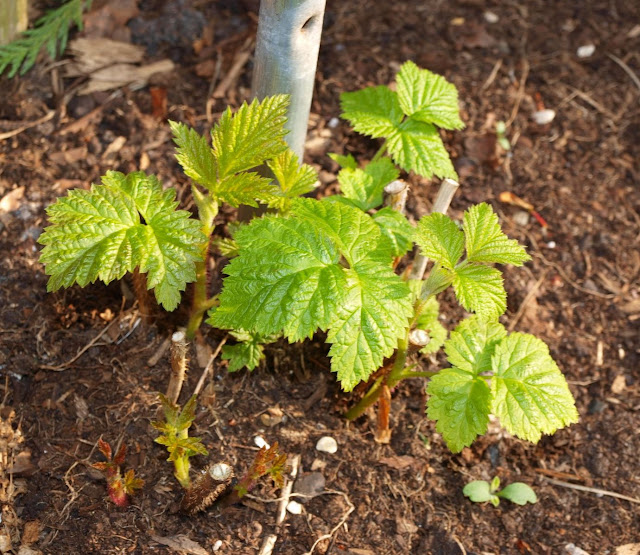 Here's a view down the line of the fence. The metal posts are bits from an old rotary washing-line. I use them as stakes for supporting some of the raspberry canes. For further support I also use wire attached to eyelets screwed into the fence posts. 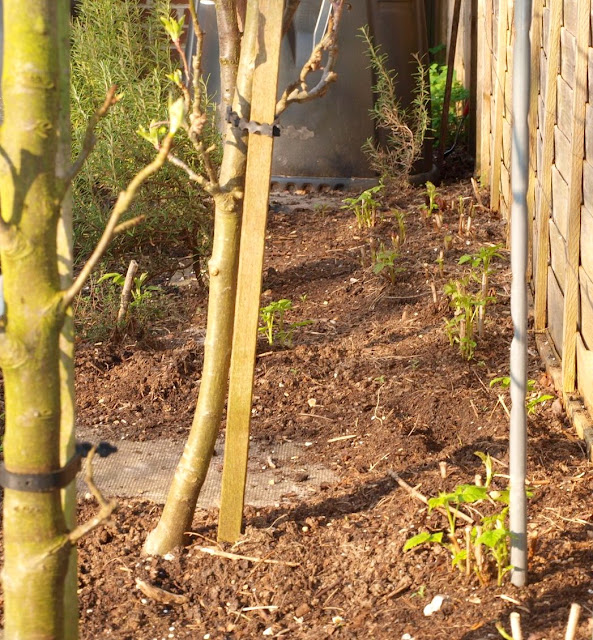 At the left of the previous picture you can see the minarette fruit trees. The one in the centre is the apple - "Scrumptious". Its buds are already producing leaves now, and it won't be long before it flowers. 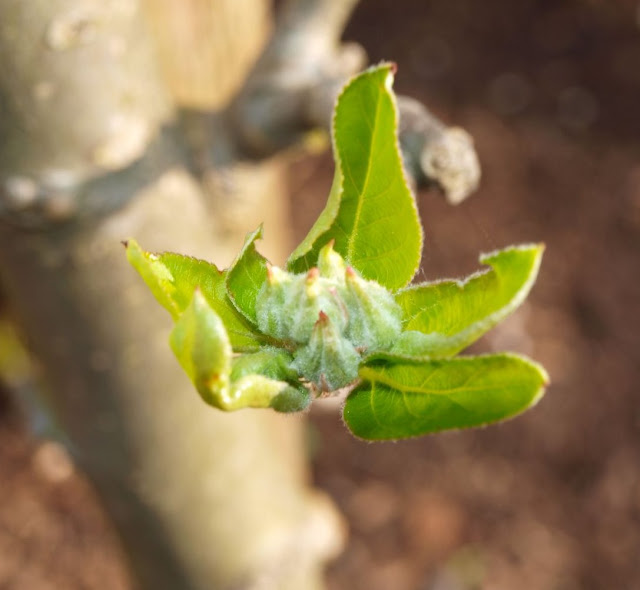 ﻿Yesterday I pricked-out most of my little tomato plants. I had sowed them in 5" / 13cm pots, with 7 or 8 seeds in each pot. The seedlings were beginning to look overcrowded, so it was time to transfer them to individual pots. 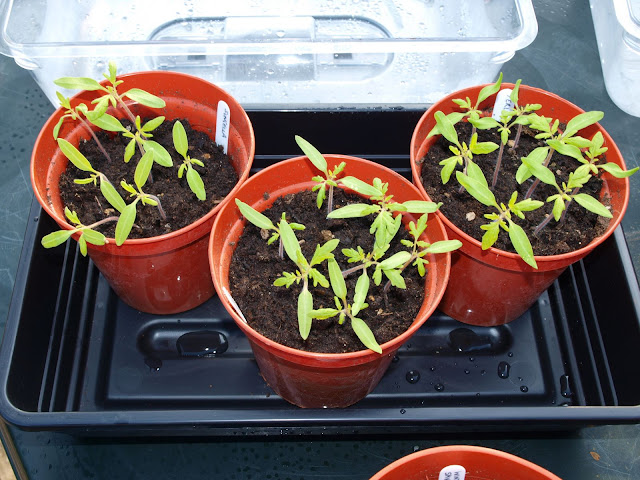 I left three of each type of seedling in the original pot, and transferred the others to individual 3.5" / 9cm pots (and I used a few of those tall cream cartons that I have saved). I made a point of planting the seedlings really deeply, since this will encourage them to form a better root system - more roots will emerge from the buried stems. 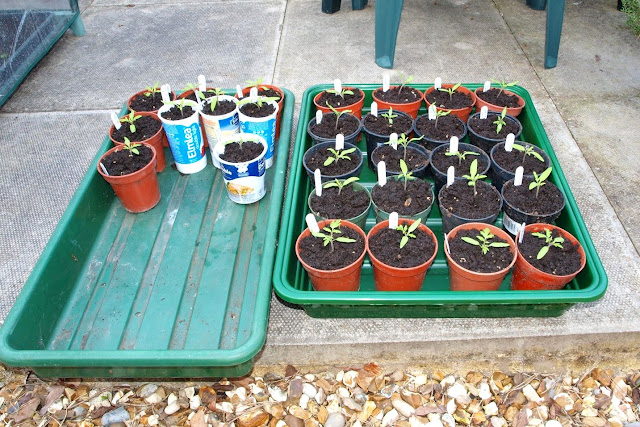 I had a look under my new cloches, where I sowed the beetroot and parsnips, not really expecting to see anything yet, but the beetroot are already up - and this is only 12 days after sowing.
﻿

Likewise, the radishes are through as well, not protected by cloches, but sown the day before the beetroot.  Normally I would say that radishes would germinate much more rapidly than beetroot, but this time it has been the reverse. I think this demonstrates how beneficial the cloches are.
﻿
﻿ The Celeriac finally germinated and is growing strongly now. I think I was just being impatient. I will only be able to grow half a dozen or so of these plants, so I will have to thin them ruthlessly within the next few days. 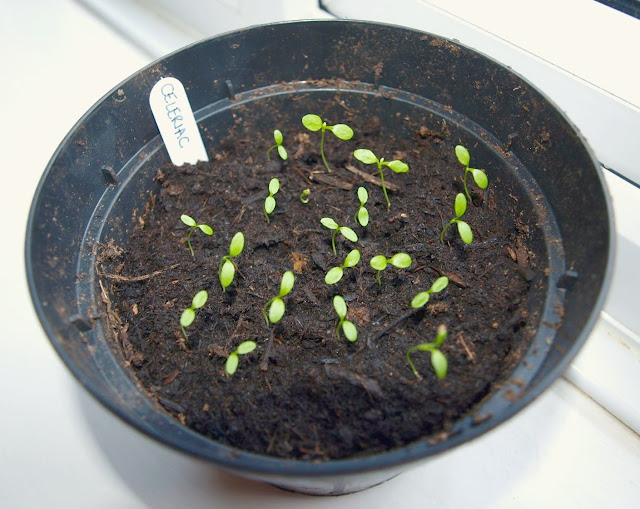 I will transplant the ones I want to keep into individual pots, just like the tomatoes, and I will grow them on indoors for a while because I know that Celeriac doesn't like cold weather.

I have also assembled the two plastic mini-greenhouses that my Mother-in-law gave me for my birthday. One of them is just like the two I had already, but the other (described as a "Seedling greenhouse") is effectively a cold-frame made of vinyl. It is higher at the back than at the front. 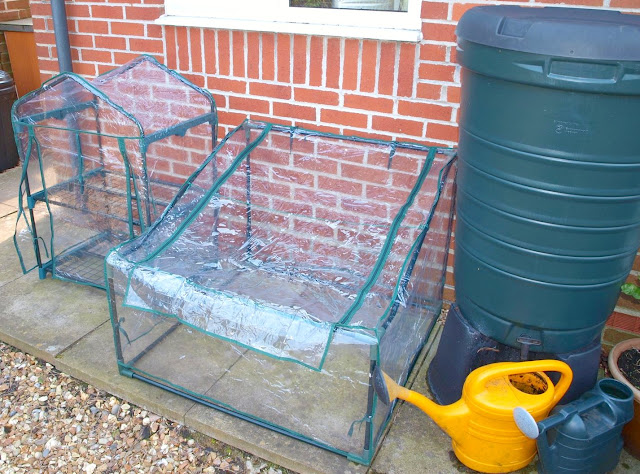 These will come in really handy for protecting my tomatoes and chillis etc overnight, when I want to harden them off and get them used to living outside. They will also be very useful for protecting vulnerable seedlings from wind and heavy rain, which we often get at this time of year - although just recently it has been unusually dry and still! In the picture above you can also see (most of) my water-butt, which collects rainwater via a diverter from the gutter downpipe. This saves me a lot of walking to and from the tap in the summertime, as well as making best use of a precious resource.

Gratuitous Lara photo opportunity...
This has nothing to do with the rest of the post, but I just wanted to direct you towards some more lovely pictures of our gorgeous grand-daughter Lara, who recently went on an outing to Peppa Pig World.... Emma, her Mum, has written about it on her blog Mellow Mummy