Blossom End Rot (BER for short) is an ailment that mainly affects tomatoes, but also aubergines and peppers. Some of my tomatoes are suffering from it now. 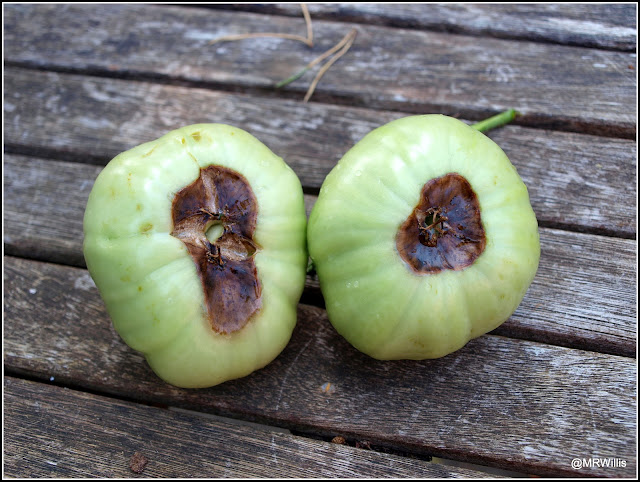 This disease is caused by lack of calcium reaching the fruits, which in turn can be the result of insufficient or erratic watering. In theory, the plants should be receiving water at a steady rate, conveying calcium and other minerals to where they are required, but in practice it is sometimes hard to achieve this, especially if the plants are grown in pots rather than in open ground. My plants are in big 35L containers and I water them at least twice a day, but it hasn't stopped BER affecting some of my tomatoes. 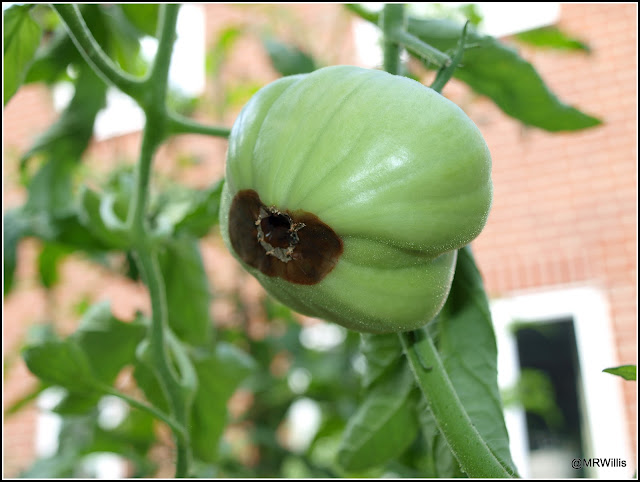 I find that BER usually affects only the bigger tomato varieties, and the small ones escape it. Also, a plant is seldom affected throughout the growing season. Often, the fruits on the first truss are affected, but then those on the other trusses are not. This may be due to the fact that the first-truss fruits are often the biggest - like these beauties, which are of the variety "Larisa".


Just to illustrate the size of these fruits, here they are with my hand against them.


I have a bit of a Love-Hate relationship with "Larisa". It produces these huge fruits, which ripen to a lovely deep pink colour, but it seems to be susceptible to every problem going - blight and BER included - so I consider it a good result if I get ANY mature fruit!

Apart from "Larisa" I have a number of other big tomato varieties. This is "Super Marmande". The fruits on the first truss are just beginning to turn colour.


This is "Cherokee Chocolate", which will hopefully produce masses of dark brown fruits. The first few look promising - and the plant is not showing any signs of BER (yet).


In this next photo you can see "Bumblebee Sunrise" (a type with small stripey fruits) at the left and "Ferline" (a small beefsteak type) at the right. Notice that I have removed some of the lower leaves to let more light reach the fruit and thus speed up the ripening process. 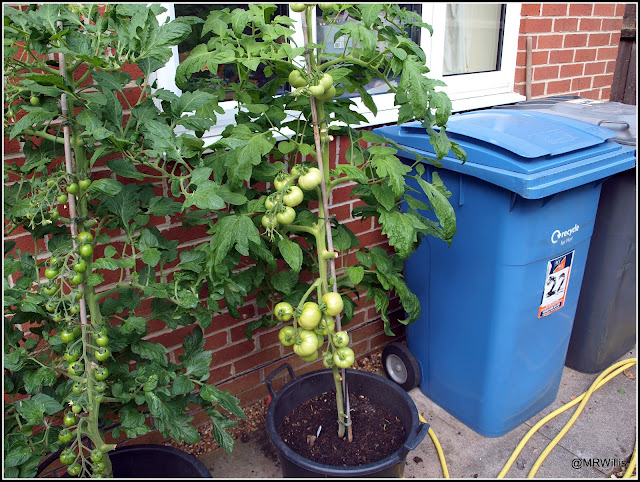 Returning to the BER theme... Once a fruit has been affected by BER there is little you can do about it. Sometimes the brown patch will stay small and go hard, in which case the fruit will probably ripen and be useable as long as you cut out the bad patch. Most often though the whole fruit quickly goes soft and mushy, and has to be thrown away. My policy now is to remove any affected fruits as soon as I see they have the disease, because I think removing them must reduce the stress level for the parent plant. In other words, the same amount of available water has to supply fewer fruits.

My friend Stephen from Victoriana Nursery Gardens grows tomatoes commercially, and he advises me (too late for this year!) that adding Dolomite Lime (e.g. Dolodust) to the growing-medium will help prevent BER. Apparently not only does it provide lime, but also "a sniff of Magnesium" which has the effect of making the lime more available and less likely to leach out. I think I'll try that next year.
Posted by Mark Willis at 12:30