July is bean month, for sure! For the last couple of weeks my Climbing French Bean "Cobra" has been pumping out pods at a rate of 200g every other day. The plants are taking a rest now, though I hope they will have a second flush later on. Now the Runners must move up to take over the baton. 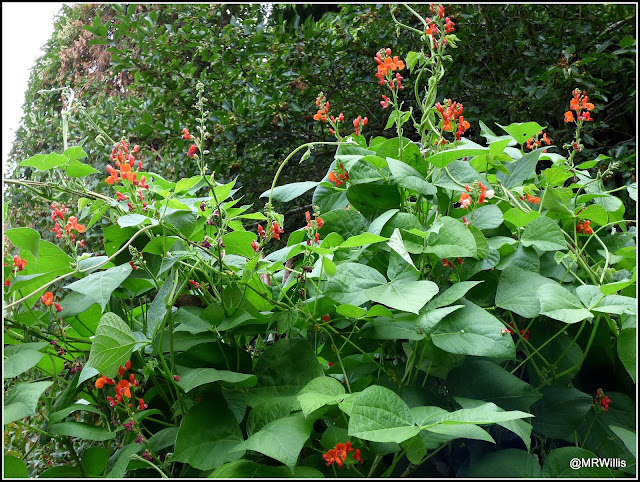 So far I have only been able to pick a very small number of Runner beans, because so many of the flowers have dropped without setting pods. I'm sure this is because of the very hot dry weather. I have watered the plants practically every day, but it doesn't seem to have helped the formation of pods. Still, it has kept the plants alive and when (if) we get a cooler spell and some rain they will probably perform better. 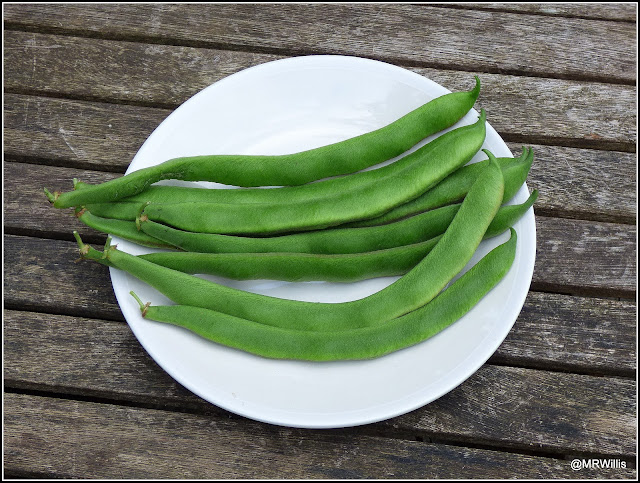 Up at my Courtmoor Avenue plot I have two types of shelling bean coming along. The first is the Tunny Bean. It produces beans that are 2-tone cream and pinkish brown. These are ones that you dry and keep for Winter use. The pods are swelling nicely and you can see the outline of the beans inside. 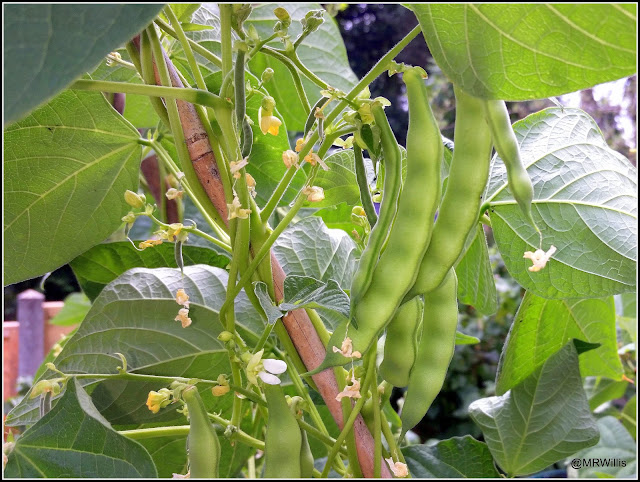 I have 8 of these plants and they are all laden with pods, so I ought to get a reasonable harvest. 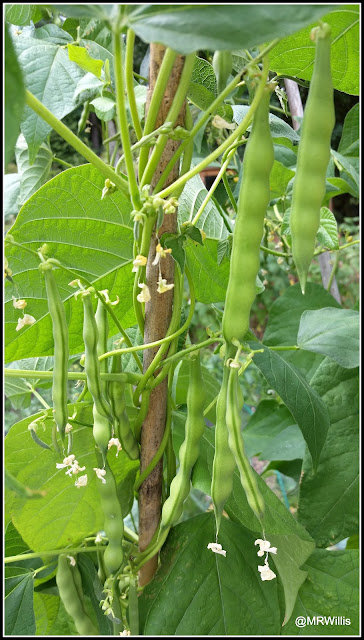 Growing up a tepee I have 14 plants of "Cherokee Trail of Tears" beans. 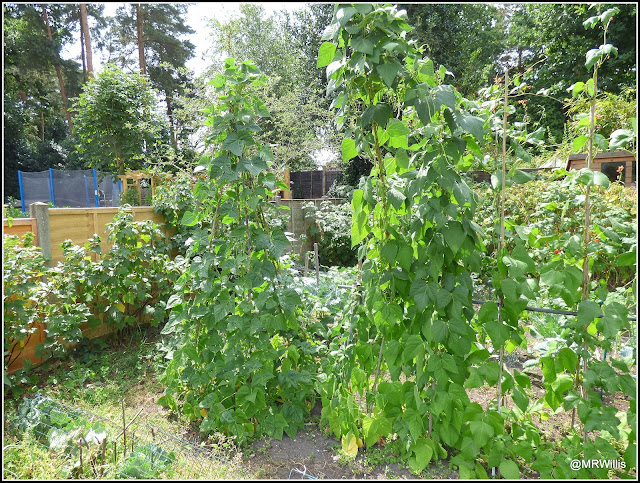 This again is a shelling bean, and the beans are small and black. They are nowhere near ready yet, but lots of pods are forming. 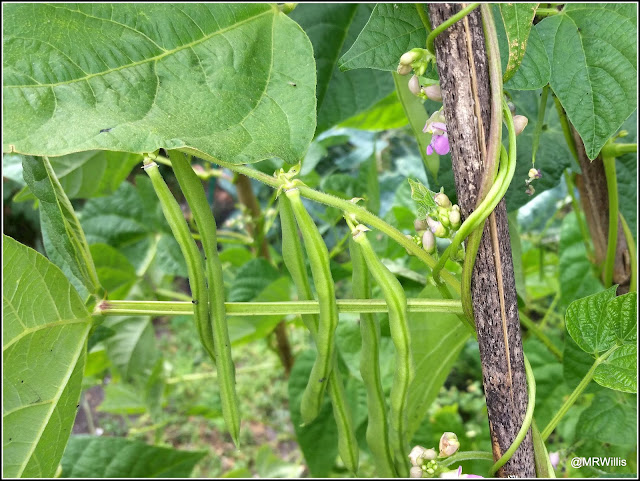 While photographing the beans I saw this rather attractive shield bug. I love the sort of scalloped edge to his body. 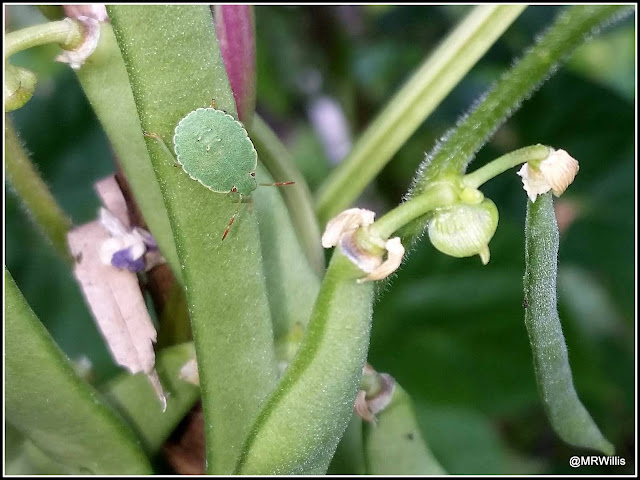 Moving now to the brassicas... Many of them (having survived the ravages of the pigeons) have grown quite tall - particularly the Brussels Sprouts - and I felt the need to re-arrange their protection. Unfortunately I don't have enough nets to protect them all properly, so a certain amount of shuffling around needs to take place. The biggest net I have has been covering the Sprouts, Caulis and Red Cabbage, but it is an anti-bird net, not an anti-butterfly net. It has successfully kept the pigeons off, but the Cabbage Whites fly in and out of it with impunity.

I decided to move the anti-bird net to the row of Winter cabbages and Kaibroc which until now has been protected with chicken wire, held in place with sticks. The plants have grown too tall for this arrangement and were pushing against the wire. 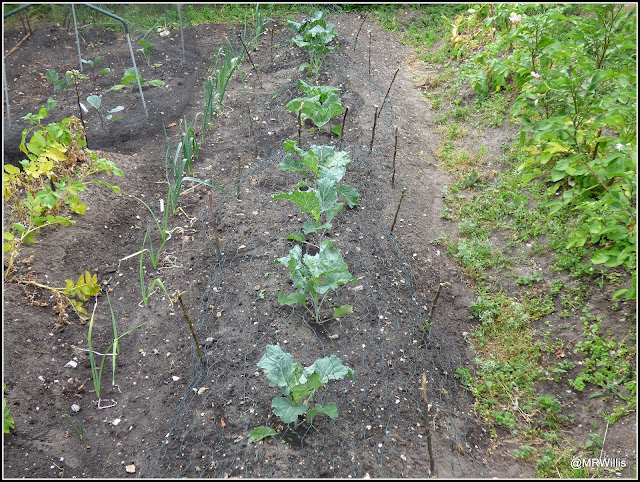 This is the same row, after deploying the net, which is draped over some flexible plastic hoops. 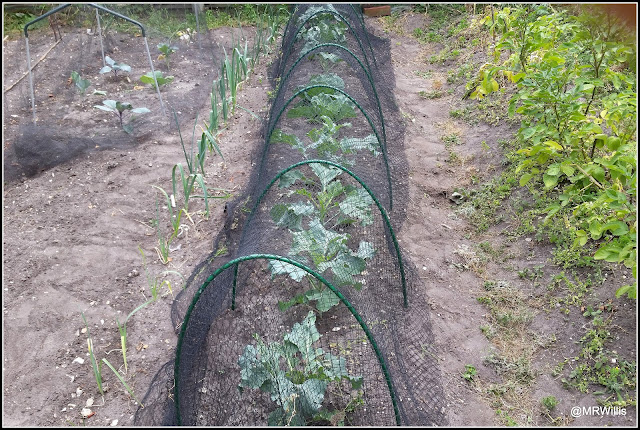 Since the net is now covering a single narrow row I was able to fold it over so that it is double-thickness. This might keep the butterflies out. If you are interested in the hoops, I got them from a firm called Gardening Naturally. Here's a LINK. I bought 2 sets of 10 of these a few years ago but never used them much in my home garden because the Build-a-Ball system and aluminium rods worked so much better with my raised beds. I gave one set away, but the second set is earning its keep very well at the Courtmoor plot.

Meanwhile, I have weeded around the Brussels sprouts and given each of them a stout wooden stake, to which they are now secured with soft string. 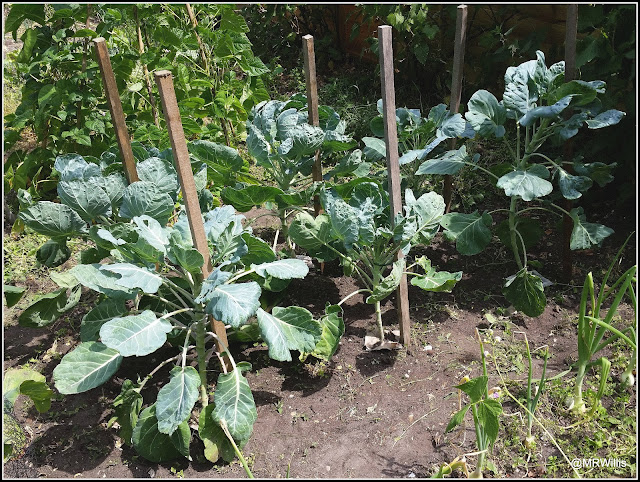 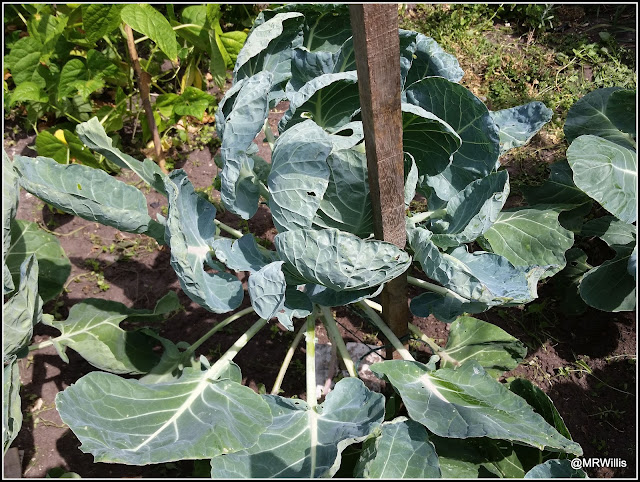 The chicken wire that was over the cabbages is now balanced rather precariously on top of the stakes (no photo, I'm afraid). I hope this will be enough to deter the pigeons, but I can't say I'm confident!

Talking of pigeons, I scored a point against them today: I harvested a cabbage!


It's not big and it's not pretty, but it's quite heavy and certainly edible (most of it, anyway). Considering that a few weeks ago I thought ALL my cabbages had been lost, I count this as a significant victory!
Posted by Mark Willis at 12:30