A couple of days ago I harvested the last of this year's crop of container-grown potatoes - two pots of the 2nd Early variety "Nicola". As with my other varieties this year, I have been conducting comparative trials to see which produces a better yield - a pot planted with a single seed-tuber, or one planted with two seed-tubers.

This time the result was more decisive than with the other varieties. Although it's not particularly obvious from the photo below, the pot with two seed-tubers was the clear winner.

In view of the prolonged hot dry spell of weather, I think this is OK. I normally reckon anything over one kilogram per seed-tuber is a good result. Of course, these "Nicola" ones have had longer to develop than the other varieties, so in a way you would expect them to produce a better yield. Actually, although I have not put this to the test, I have heard that "Nicola" keep fairly well in the ground even after the haulm has completely died down, so presumably I didn't need to rush to harvest them. Having said that, I know that the skins of older potatoes can be a bit rough, and the flesh tends to be denser. 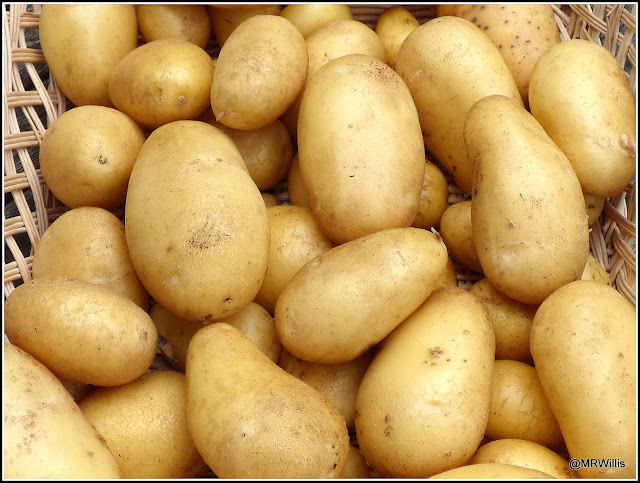 I find that "Nicola" is quite similar to the more well-known "Charlotte", which it closely resembles. However, I think that "Charlotte" is still superior. The texture is always so light and buttery - and it cooks really quickly. "Nicola" is good, but not that good.

In amongst this batch of potatoes I found one that had already started to sprout: 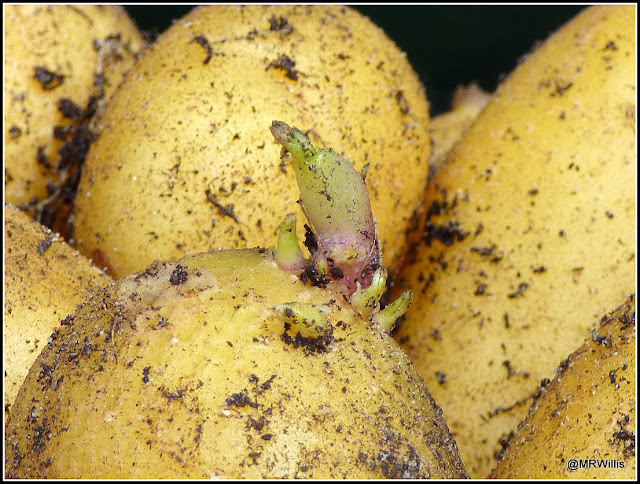 Presumably if I had just left it in the ground, this one would have begun the growing-cycle all over again - maybe producing spuds for Christmas?!

For the record, these are the full results from the comparative trials:-