This week I decided to lift some of my "Ailsa Craig" onions. 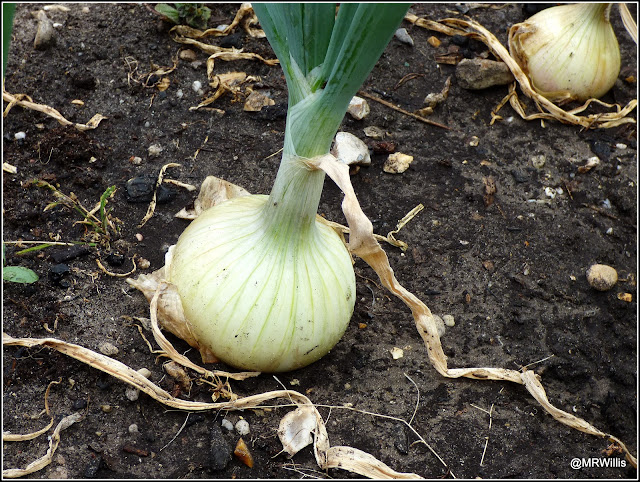 Although many of them are still modestly-sized, I think they are mature. Their leaves had started to topple over, which is a sign that they are ready. I think the exceptionally dry weather conditions have meant that the onions have not grown as big as they might have done if we had had some occasional rain. 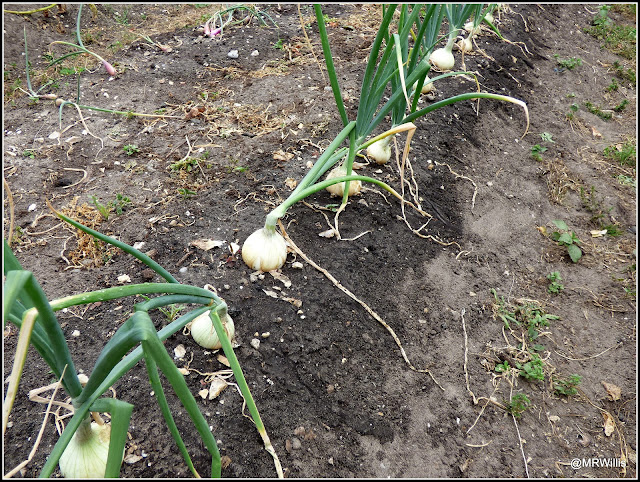 I had two rows of these onions, each of 24 plants, plus a few spares that were tucked in at the ends of the rows. The first row was in a very open position where it got light all day, whereas the second row has been shaded to some extent my the tall climbing beans. On this occasion I picked all the ones that looked ready; any that looked as if they might grow a bit more I left for another time. This is what I got: 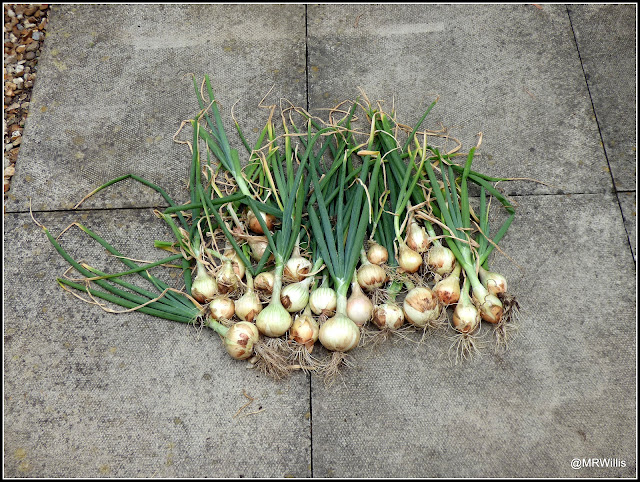 As I said, they are not big, but I expect they will be tasty. Home-grown produce is always so much nicer than anything you can buy in a shop - especially if eaten fresh. This is not enough onions to keep us going for more than 2 or 3 weeks, so I don't plan to keep them for very long. 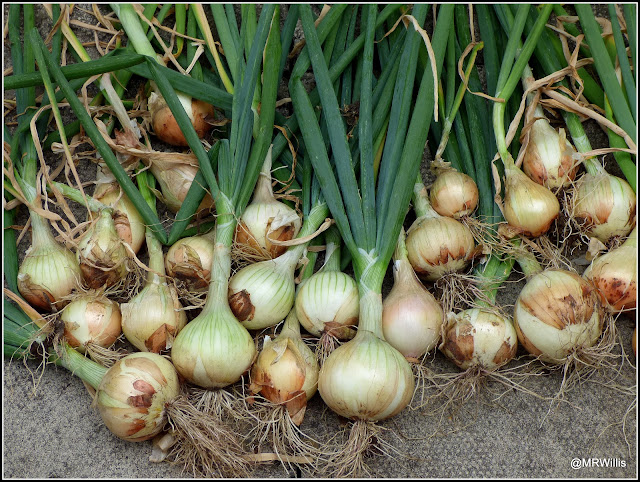 The Courtmoor plot seems to be good for growing the Allium family, so I think next year I'll grow a lot more onions and shallots - maybe try some garlic - and I'll probably plant fewer of the potatoes, which have performed dismally. Having said this, of course 2018 may not be a representative year and maybe the potatoes would have done better in a year with more Summer rain. 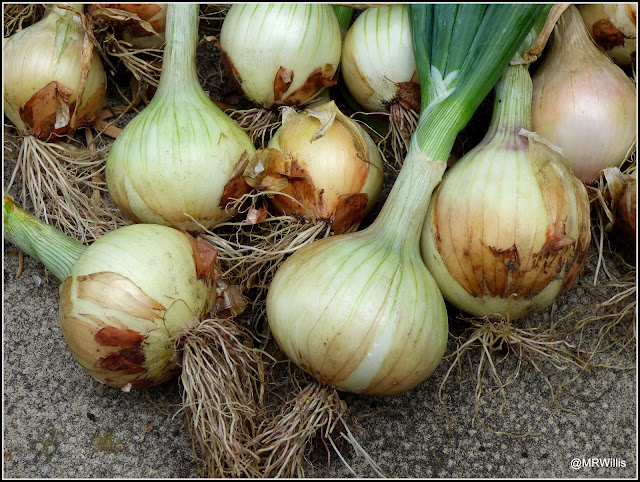 Here's a good idea for drying onions, which I got via a friend on Twitter. Unfortunately the slats on my coldframe are quite widely-spaced and some of the smaller onions just fall through! 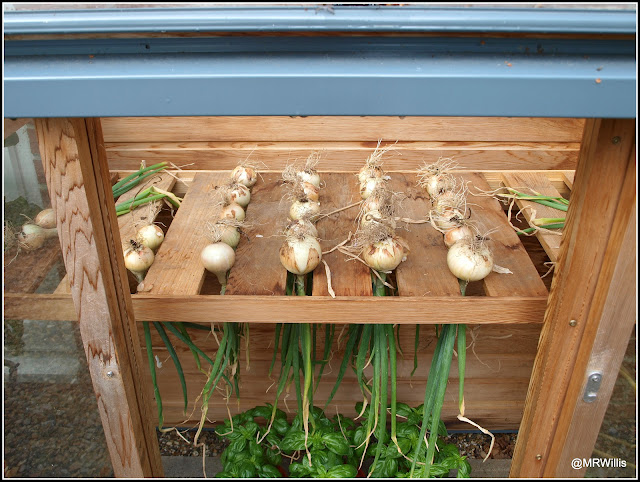 When I went to the plot to harvest the onions I had an unpleasant surprise - something (probably a fox or a badger) had torn up one of my "King Edward" potato plants: 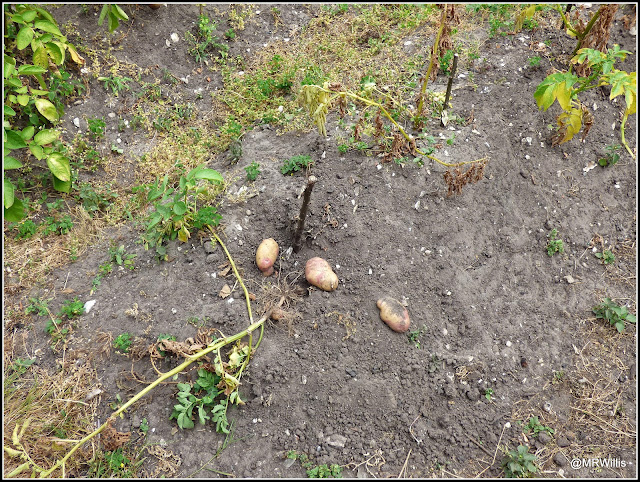 "King Edward" is a Maincrop variety, so I had not been intending to harvest any of them just yet, but the deed was done and I just had to make the best of it, so I dug around in the soil to gather up all the tubers I could find. There were precious few - and even then I had to discard a couple that had obviously been chewed or scratched. Maybe whatever dug up the plant was desperate for food? 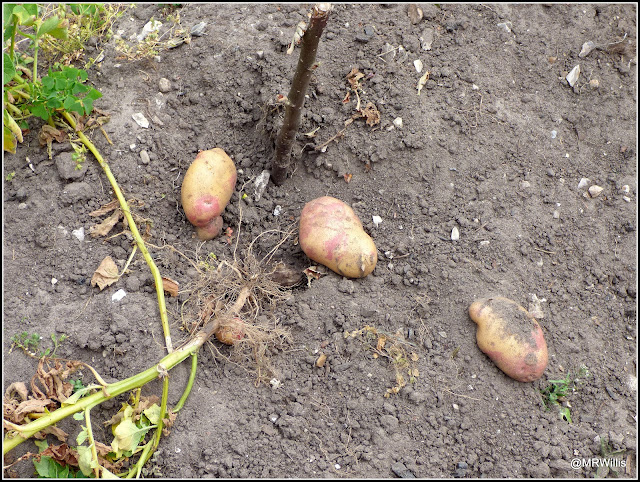 Because of the dry conditions the potato harvest has been very small this year, but you can see in the posed photo of my "Harvest Basket" that there were a few decent tubers.


"King Edwards" have a light fluffy texture when cooked and make particularly good Jacket Potatoes (baked with their skins left on), so I think I'll try these ones done like that. 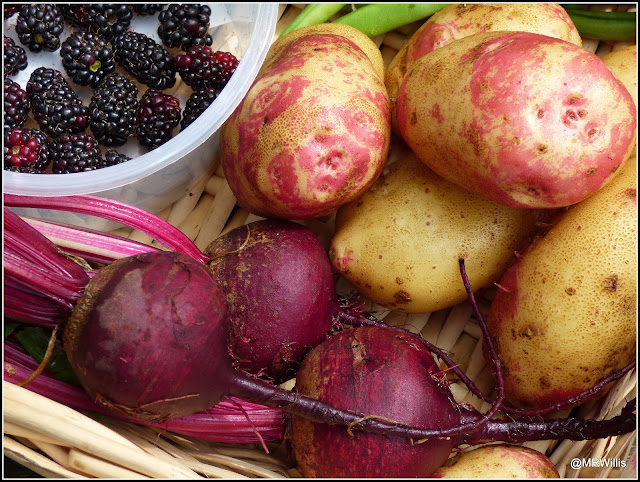