Regular readers will recall that for family holiday reasons this year I sowed my tomato seeds a bit later than usual, so I can't yet claim to have any ripe tomato fruits. However, some of them are not far off. This is "Maskotka", usually an early-ripener: 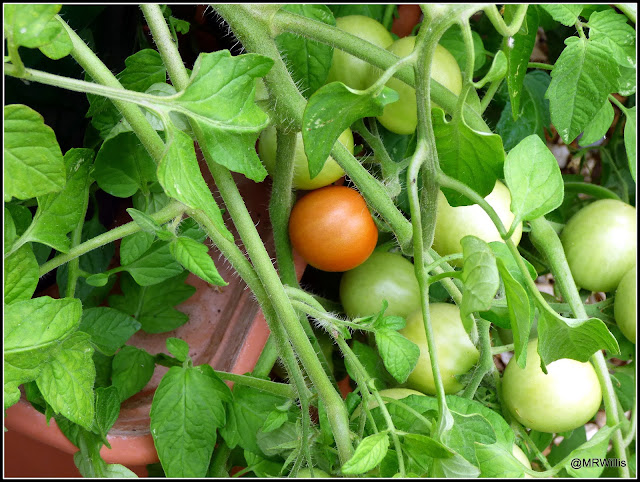 These "Montello" are also just beginning to change colour. These are on the plants out at the front of our house, which gets the full benefit of the afternoon and evening sun. However, most of my tomatoes are still firmly green, like these "Super Marmande". 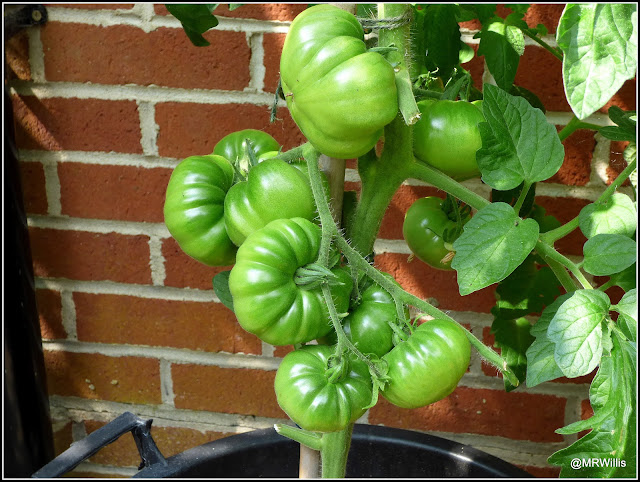 If it weren't for the threat of blight, I wouldn't be too impatient for them to ripen, but I know it is always a race against time. Blight seems to strike every year these days - it's just a question of when.

My three Dwarf tomato plants ("Beauty King", "Barossa Fest" and "Caitydid") are a long way behind the other varieties. They are only just setting their first fruit.


I was asking Craig LeHoullier (who gave me the seeds for the Dwarf varieties) whether it was normal for them to fruit late, but he said that these varieties are so new that they have not yet accumulated enough data to judge this one way or another. He did say though that they were developed for warmer climates than ours, so he was not surprised to hear that they are not doing quite so well in European conditions. [I assured him that in the UK this Summer it is practically tropical!]

You may remember that I planted one each of the three Dwarf varieties up at the Courtmoor Avenue plot too. They have had much less TLC (particularly water) than their siblings here in my own garden and it is interesting to see how this has affected their development. The ones at Courtmoor Avenue are a lot smaller. They are only about 2 feet tall, and have very few sideshoots. 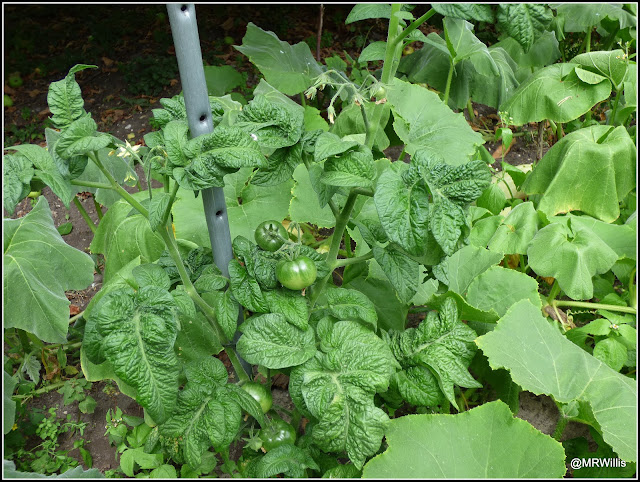 The three Dwarf plants growing in my own garden are much taller and have many more sideshoots - several of which I have removed in order to make the plants more compact. 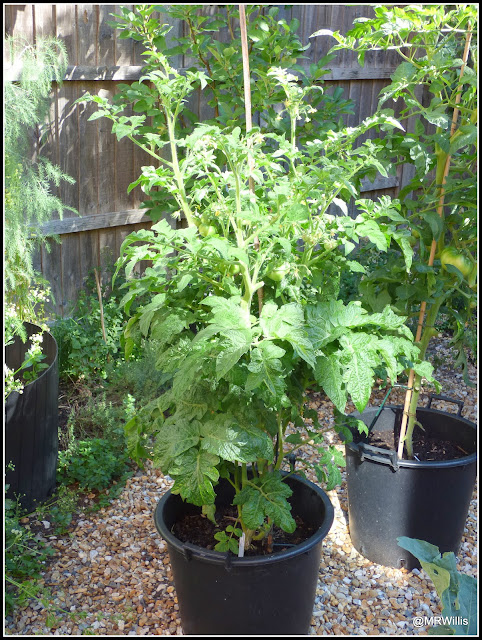 However, the fruit is at just the same stage - in both cases only a few small tomatoes have formed so far, and they are still a long way from ripe. 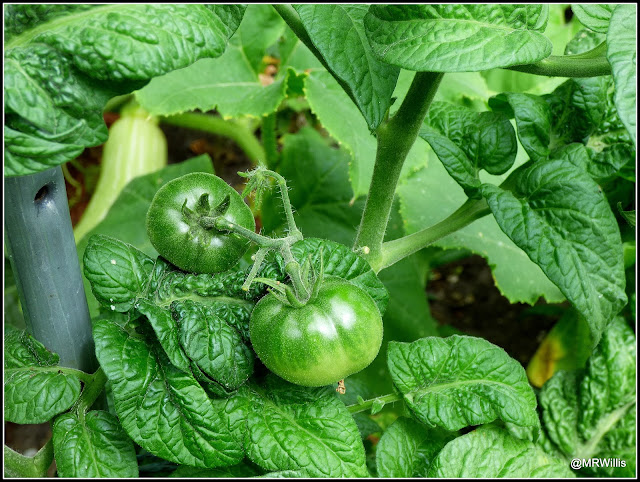 Up at Courtmoor I also have one plant of "Mountain Magic", which again I have left virtually untended. I have tied it to a support-stake in two places and watered it a few times, but I have not removed any sideshoots or fed it any Tomorite. It seems to be doing OK, and has a fair few fruit, although they too are still small and green. 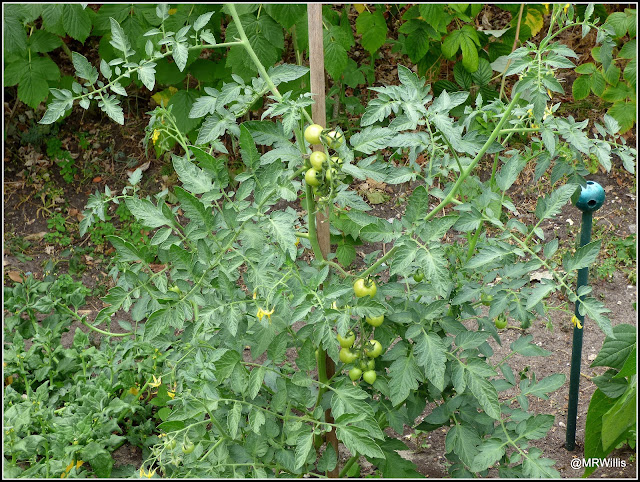 "Mountain Magic" is supposedly very resistant to blight and other diseases, and it is mainly for this reason that I have created a few more young specimens of it by planting some sideshoots that I had removed. 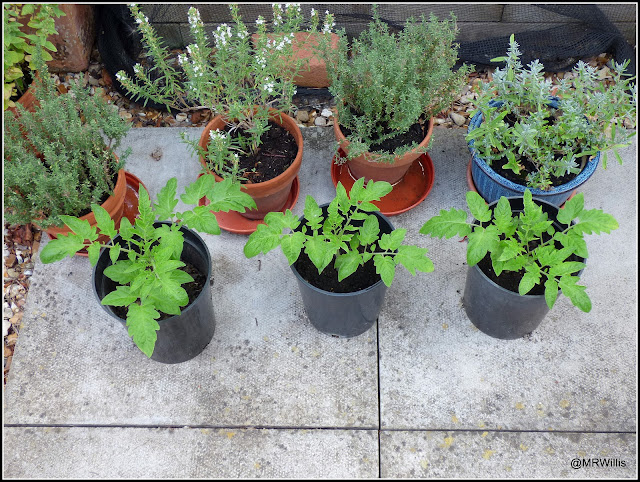 I kept the shoots in a jar of water until the stems had sprouted a mass of roots (which took about 2 weeks) and then just planted them deeply in some pots filled with soil. Obviously they are a lot smaller than the parent plant, but that's the whole point. If I see signs of blight on any of my tomato plants I will be able to segregate these little ones and keep them under cover where they are less likely to pick up the (air-borne) blight spores. Even if blight doesn't appear - and I sincerely hope it doesn't - I plan to plant this trio up at Courtmoor as soon as they are big enough. 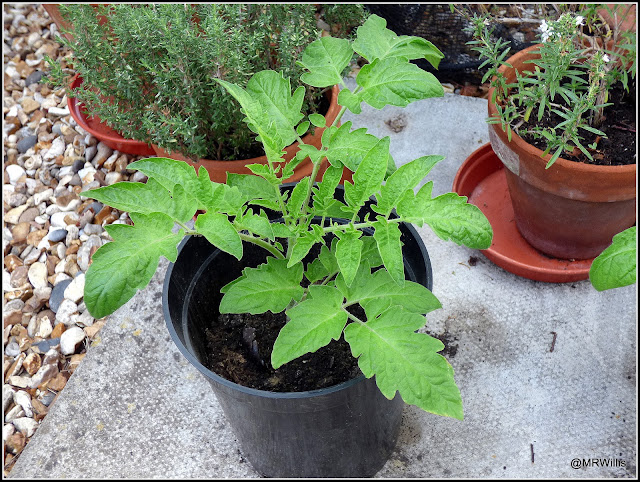 The hot dry weather seems set to continue for at least another couple of weeks and quite possibly another couple of months. This means that not only will these small 2nd-generation plants probably have time to reach maturity before Autumn, but also that blight is less likely to appear. It likes warm but moist conditions and right now the conditions are anything but moist!
Posted by Mark Willis at 12:30