Despite the prolonged hot dry spell, the plot is still largely green and full of nice stuff! 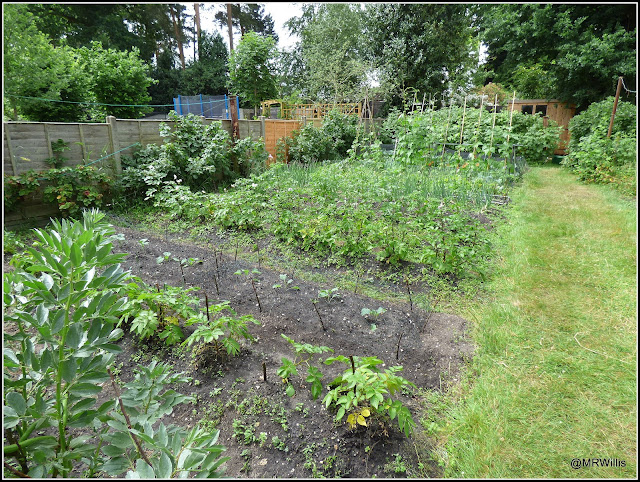 As in most gardens and allotments in the UK at present, my beans are romping away, enjoying the sunshine: 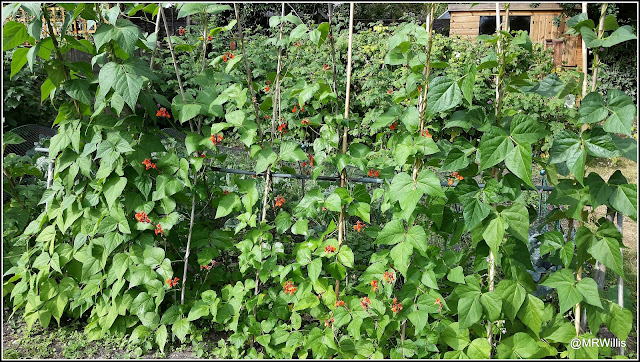 The scarlet flowers of the Runner Beans are the most obvious feature, but notice how little foliage there is on those plants compared with the French beans at the ends of the rows.

Some of my onions are beginning to look quite promising too. Significantly those in the row which is partially shaded by the beans are doing a lot better than the ones out in the direct sunlight where they are probably struggling with the heat.


One of the onions is very pink. I suspect that this may be an imposter - maybe a stray seed of another variety got into the pack of "Ailsa Craig" by mistake? 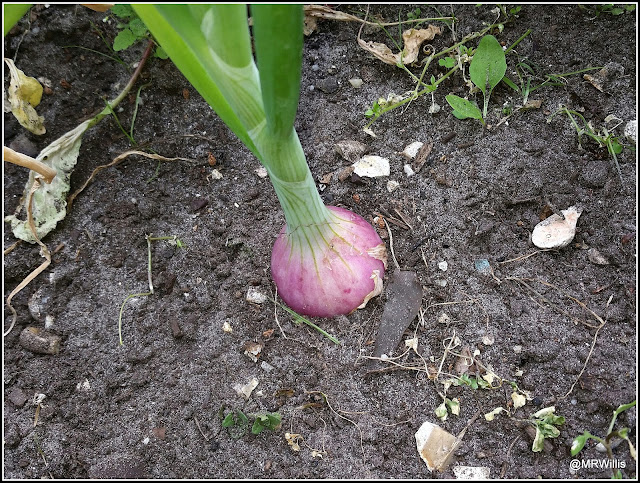 The "Long Red Florence" onions are still pretty small - again probably not enjoying the hot dry conditions. There is only so much watering I can do...


The squashes are looking great, and most of the plants are producing lots of flowers. I'm not an expert on squashes, but this looks like a viable fruit:

I'm doing my best to water the squashes (and all the other plants) every 2 or 3 days, but I expect they would like more frequent drinks.

The bigger brassicas (Brussels Sprouts and cauliflowers) are starting to need less watering now that they are well established. They also benefit from a bit of shade from the bean plants too.


Before long I'm going to need to raise the netting, because some of the plants are beginning to push up against it. 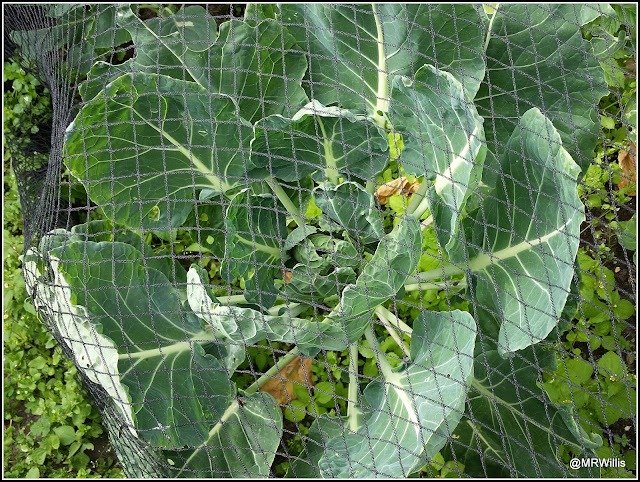 Talking of netting, here is my latest edifice, protecting some newly-planted cabbages. Of course it's made from old bits and pieces, and that ubiquitous scrap of lightweight extruded plastic netting which has certainly seen a new lease of life this year! 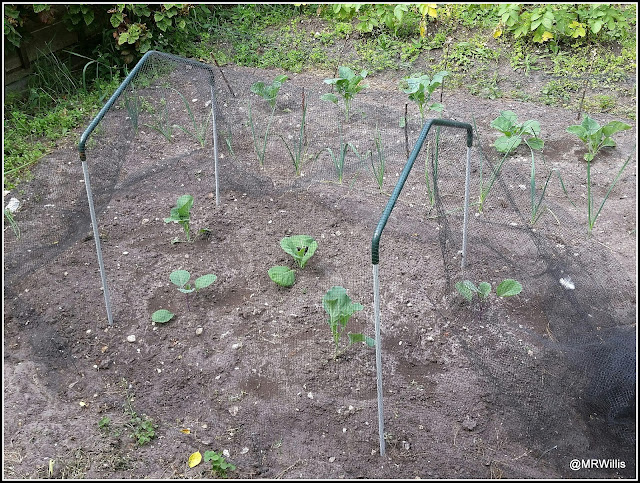 Under the netting are 1 x "January King", 1 x "Predzvest, 2 x "Red Drumhead" and one Kaibroc, all of them from second sowings replacing earlier plantings which were destroyed by the pigeons. The excess netting bundled up at the right-hand end will probably be extended to cover a few more seedlings once the potatoes further along have been harvested.

It won't be very long before I'm harvesting Beetroot. The biggest ones are nearly the size of a golf ball now. Yes, I know they are too close together, but I never found the opportunity to thin them out earlier in the season. Once I start picking, then they will be thinned out! 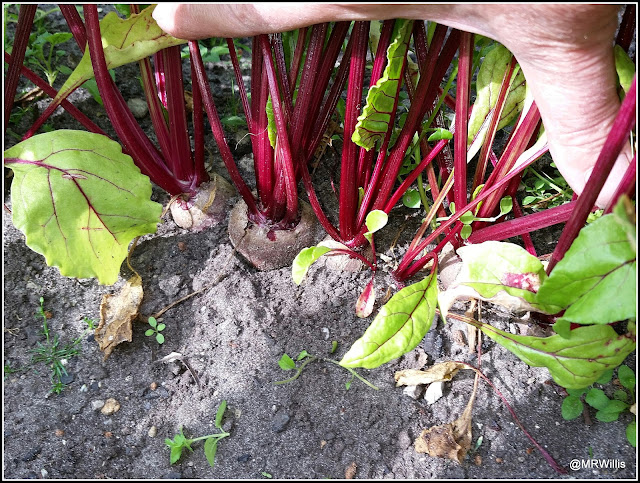 Since I last posted an update, I have harvested all the remaining Broad Beans and dug up the plants. The crop was OK, though not a bumper one by any stretch of the imagination, but for me it was significant since these were the first plants to be planted by me on this plot. 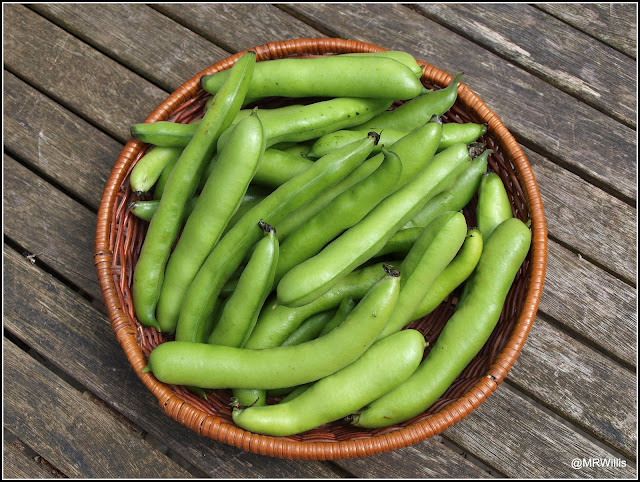 The space formerly occupied by the BBs has now been cleared and sown with one row of "French Breakfast" radishes, and another of "Boltardy" beetroot. It's late in the year for sowing beetroot, I know, but I think it's worth a try because here in Hampshire it's often late October before we get any frosts, which gives the beetroot plenty of time to do their thing.

In the next few days I expect to be harvesting the first of the "Cobra" Climbing French Beans. It seems like only yesterday that they started flowering, yet now they are covered with pods. These particular ones are very pale because they are deeply buried in the foliage, where they don't get much light. 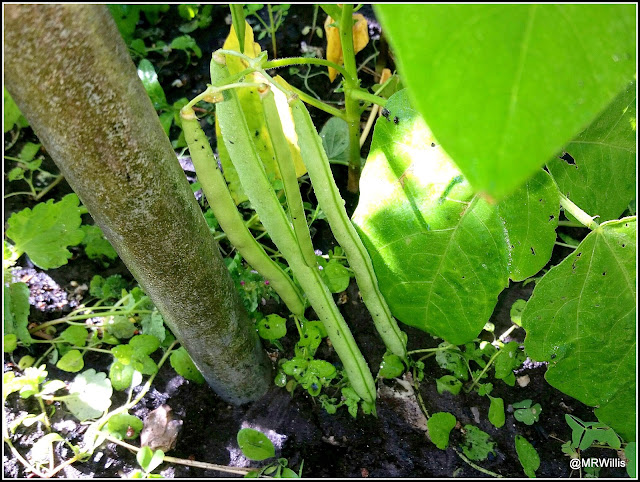 I know from experience that I don't have to rush to pick the "Cobra" beans. The pods can get huge without going tough and stringy.

The last thing for me to report today is a rather unexpected harvest: 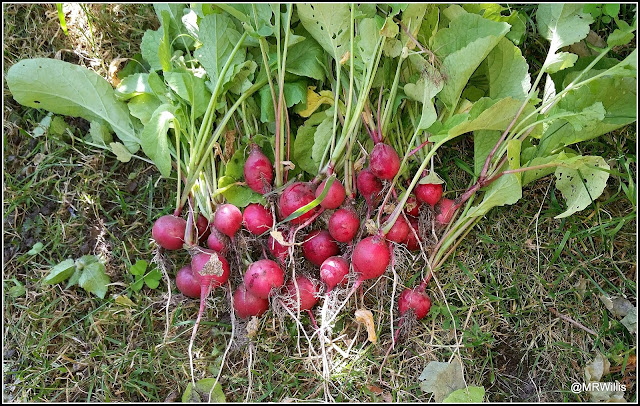 These Radishes are from my second sowing, which I thought had all bolted due to the exceptionally dry conditions. As you can see, I managed to rescue a few.
Posted by Mark Willis at 12:30