My Spring-planted garlic has not been particularly impressive - but my excuse is that I'm a novice in this department, and I'm probably not treating it right. I shall improve! Next time round I think I'll do the conventional thing and plant my garlic in Autumn... 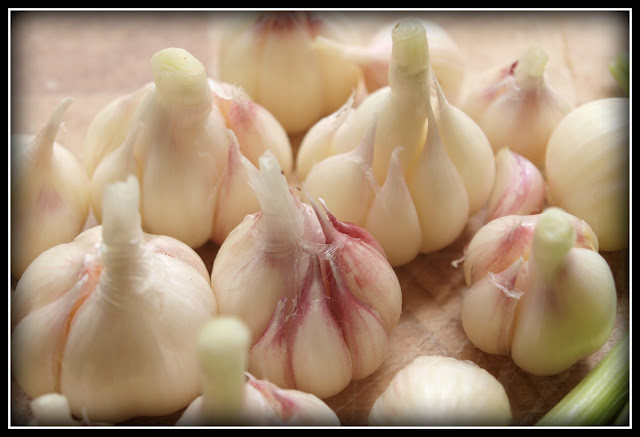 I wasn't too sure which types were included in my mixed pack from Thompson and Morgan. To be honest, my purchase was an afterthought, and I suspect that T and M's offering was too - maybe the bulbs that didn't sell in the Autumn had been kept in cold storage until Spring. Or am I being uncharitable?? It seems that some of the bulbs were Softneck types and some were Hardneck. (See, I'm learning the lingo!)

The foliage of some of the plants had withered and gone brown, so I didn't think they would grow any more, and I pulled them up. Others though had produced scapes (immature bulbils, a bit like flower-buds), so I identified these as Hardneck varieties, and went in with the secateurs, cutting the scape but leaving the bulb in the soil... [Note: my research shows me that Spring-planted garlic is never going to produce big bulbs, for which the plants need an extended (8 -10 week) period of cold (10C or less).] 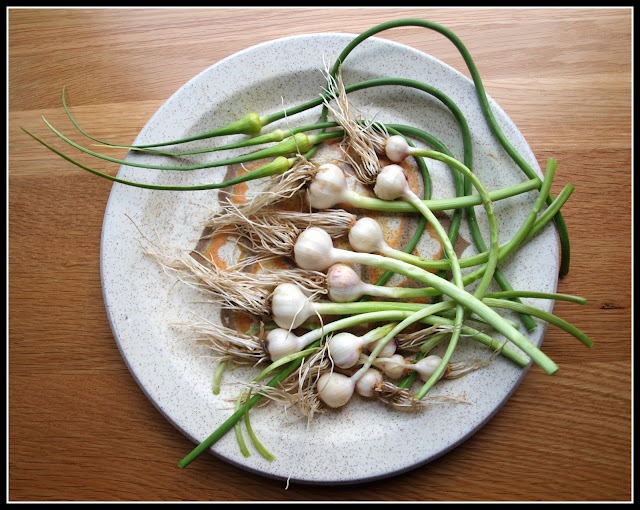 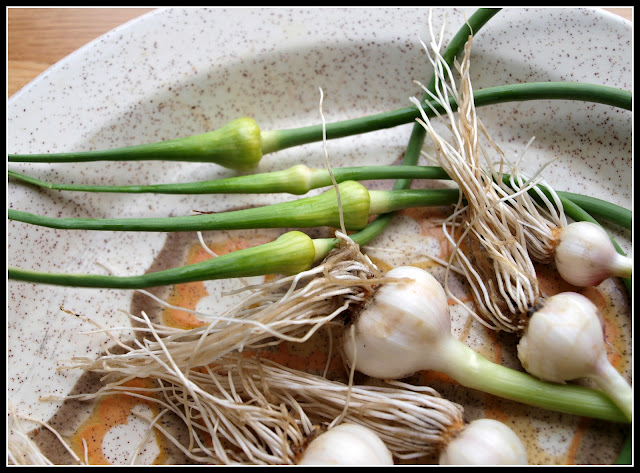 Viewed in close-up these bulbs don't look too bad, but in all honesty they are very small. 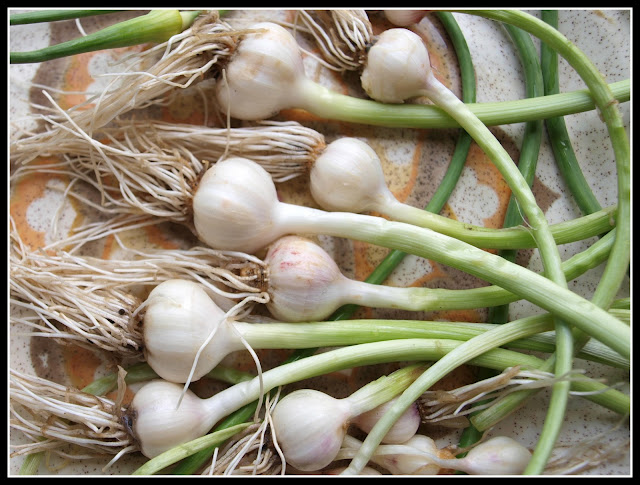 I didn't consider them big enough to be worth storing, so I decided that we should try eating them straight away, as "wet" garlic. 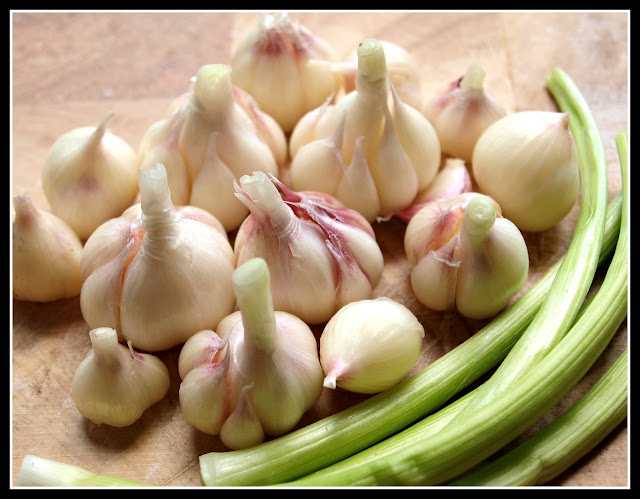 The garlic smelled pretty pungent, so I was hesitant about how to use it and about how much we would be able to eat in one go, so I invented a simple dish for us to eat at lunchtime. If it didn't work we could always have a sandwich. I peeled the garlic and separated the tiny bright pearly white cloves, and I chopped the stalks of the scapes into sections about a centimetre long, but left the "flowers" intact. 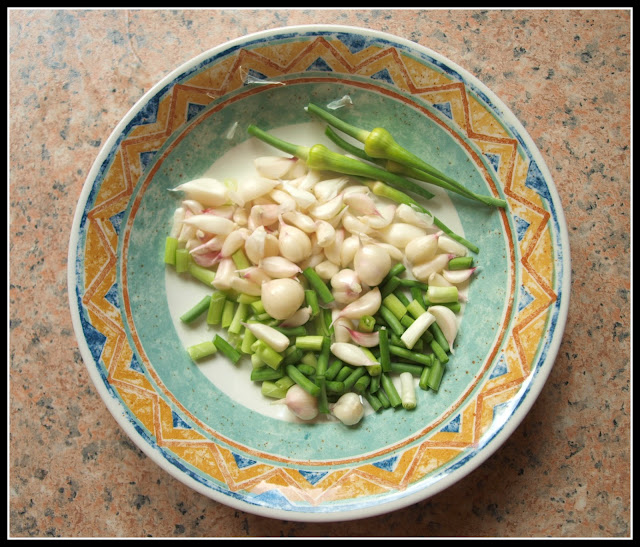 I sliced some cold cooked potatoes and sauteed them in some oil. About halfway through their cooking time I added the garlic, and cooked the dish slowly until was golden brown. I felt it important not to cook the garlic too quickly because I thought that the little garlic cloves might burn easily. 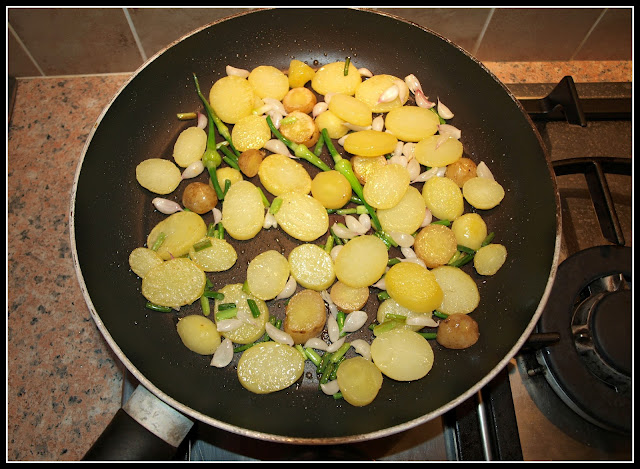 I served the dish with a few quartered cherry tomatoes for added colour, and some salami - in this case a type we had bought recently in France. It has hazelnuts in it. 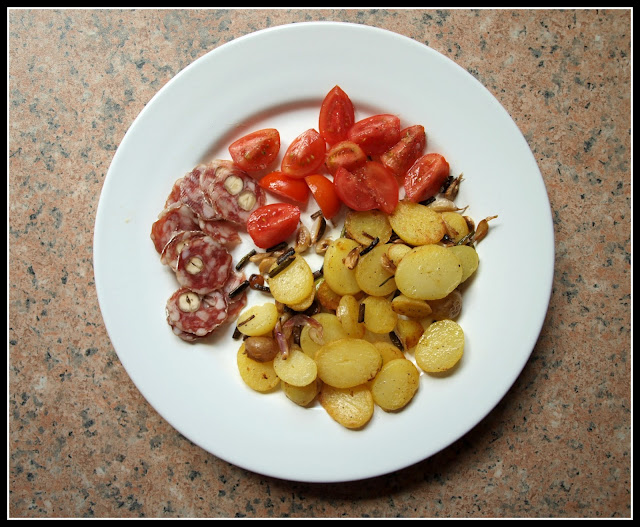 Jane had initially been horrified by the amount of garlic I was using, but in the end I think she had to admit that the young garlic was much milder than mature stuff. To be honest I didn't think it tasted any different to "normal" garlic, but it was nevertheless nice. The scapes were good too, but perhaps not as exciting as I had been led to believe. Jane said they reminded her of the Chinese Garlic Chives we used to get on the market when we lived in Hong kong. 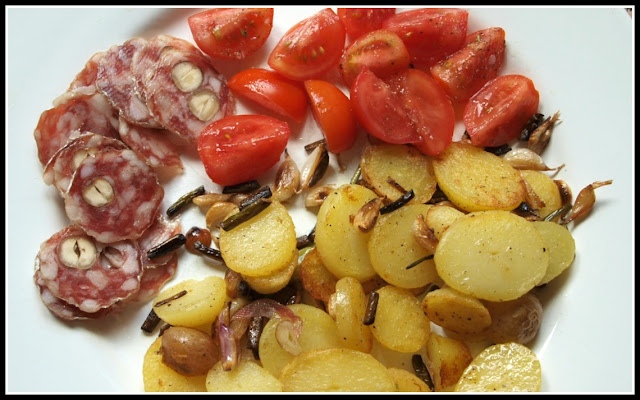