Last week Jane and I took a 4-day mini-break holiday to Vienna. This is a city that we both love. We have been there together before, and I have been on my own a couple of times on business, so we know it quite well by now. It is a city with many attractions of lots of different types. It has imposing architecture, excellent museums and art galleries, and (most important for us) a multitude of Food and Drink opportunities!

We stayed in one of the Hilton hotels (Am Stadtpark). Not very ambitious, you may say - but incredibly convenient: it's only 200 metres from the terminus of the CAT (City - Airport Train), which whisks you efficiently from airport to city centre in only 16 minutes. It's also within easy walking distance of the City Centre. Vienna is a very compact city. Most of the major attractions are contained within or very close to the Ringstrasse (inner Ring Road), around which a fit person could comfortably walk within a couple of hours. You wouldn't need to walk though, because the city has a very efficient and cheap-to-use public transport system which is very easy to navigate. We made the most of it!

My post today showcases some of the city's attractions - some of which we only glimpsed from the tram or bus, but many of which we personally visited. This first photo is of the Opera House - the place which hosts the world-famous New Year's Day concert:

This next photo is of the MAK - Museum of Art and Design (kunst). To most people it is probably a museum, but to us it was a restaurant. Yes, inside it has a really good restaurant, in which we had a fabulous dinner - a dictinctly Austrian meal, but modernised and lightened. Four us, a beautiful occasion: sitting outside on a glorious summer evening, eating brilliant food and sipping some excellent Austrian wine! (As a bonus, it was only a five-minute walk from our hotel). 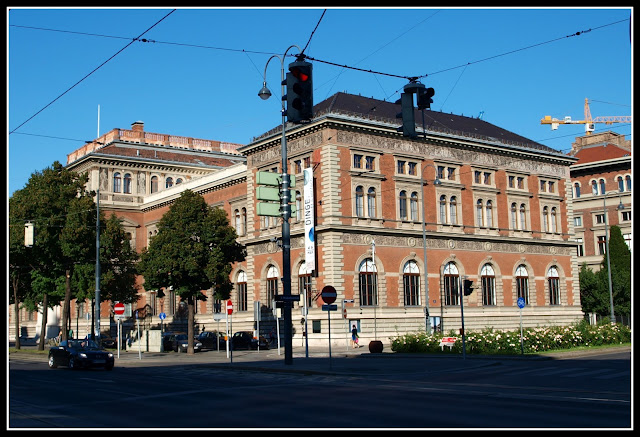 On the first full day of our trip we visited the Belvedere palace- erected for the famous Prinz Eugen (who obviously had good taste in architecture, and lots of money!) Getting off the tram at the appropriate stop you are confronted with a really wierd juxtaposition of vistas. On one side of the road is this forest of cranes on a 21st Century building-site: 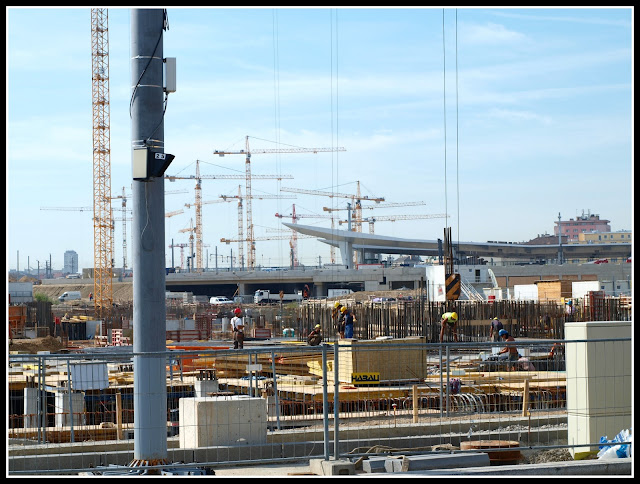 On the other is this: the stunning sight of Schloss Belvedere: 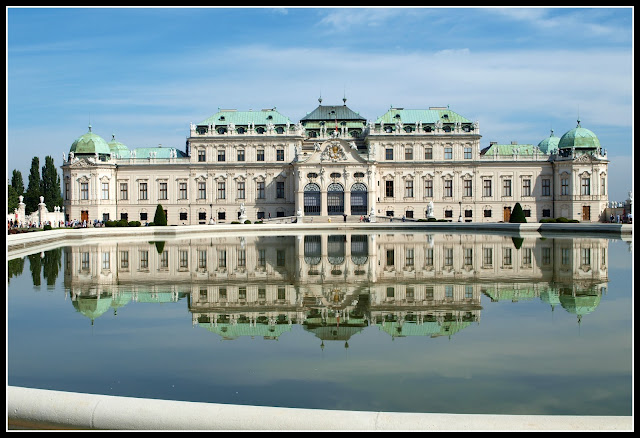 As luck would have it, the palace is currently hosting an art exhibition to celebate the 150th anniversary of the birth of Gustav Klimt, one of our favourite modern artists, so we had a real Field Day here. The buildings themselves are incredibly ornate... 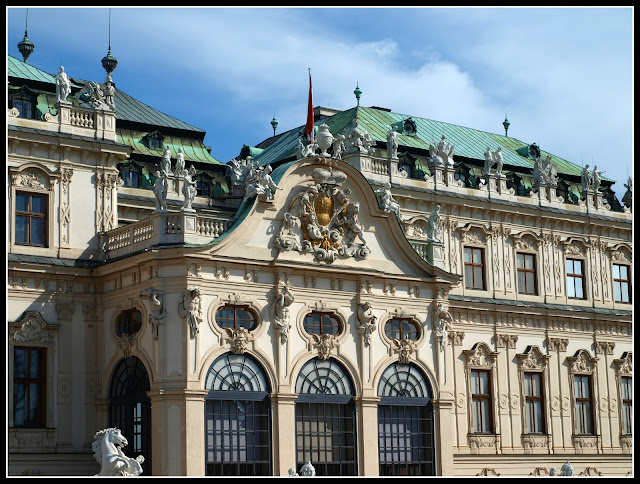 And the gardens are equally impressive - though to my eye somewhat stark and formal. Look at these neat lines of closely-cropped Yew trees, stretching out almost to infinity (the "bottom of the garden" at Schloss Belvedere is about half a mile away!) 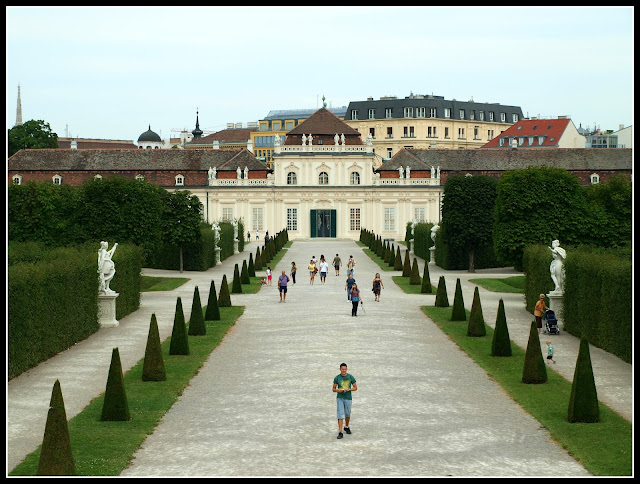 Not everything was quite so perfect when viewed at close quarters though... 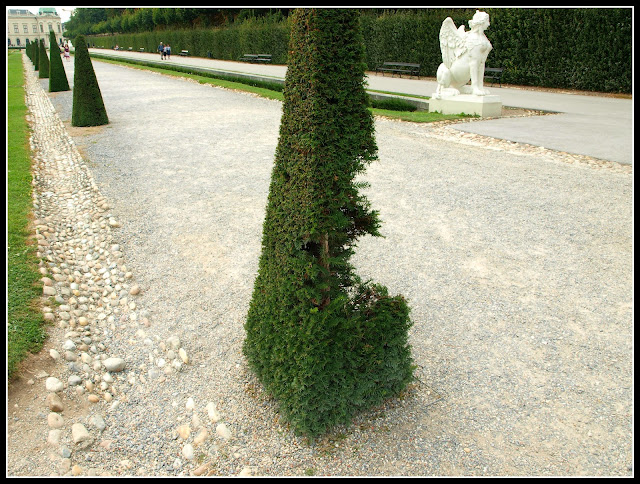 The gardens were liberally sprinkled with  appropriately ornate statuary: 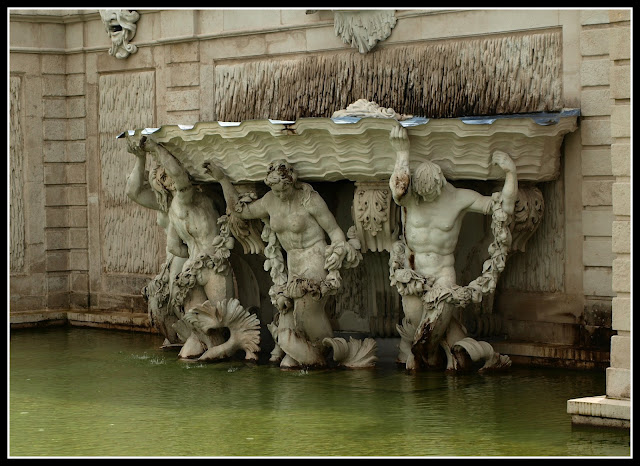 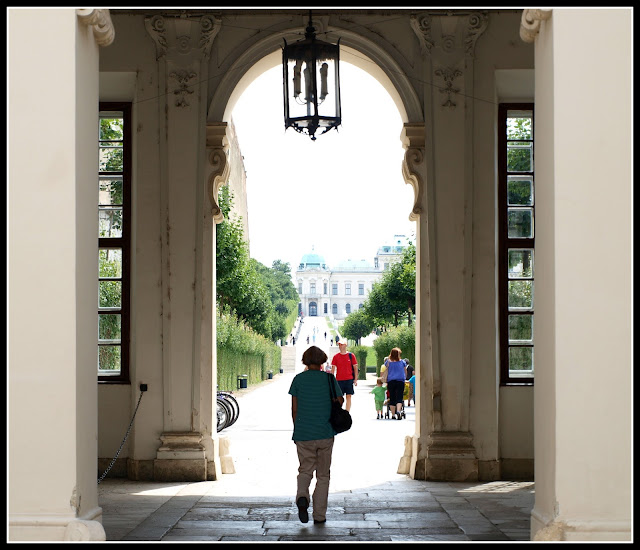 The afternoon of Day 2 saw us taking a closer look at the city centre. In many respects it is like any other major city centre - devoted mostly to the vacuous pursuit of "shopping", with all the usual big names being represented: Armani, Gucci, Prada etc, etc. Hordes of people mill to and fro, looking for suitable opportunities to waste their money. 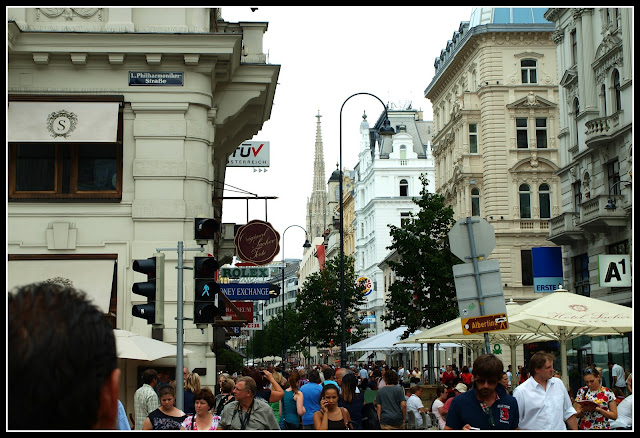 Maybe sometimes they should look upwards a bit, above the level of the shop-fronts. Then they might see things like this: 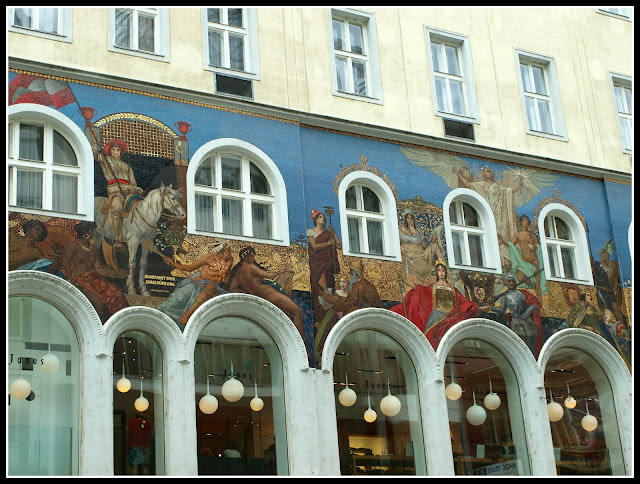 This is a view of the Graben - the Vienna equivalent of Bond Street in London: 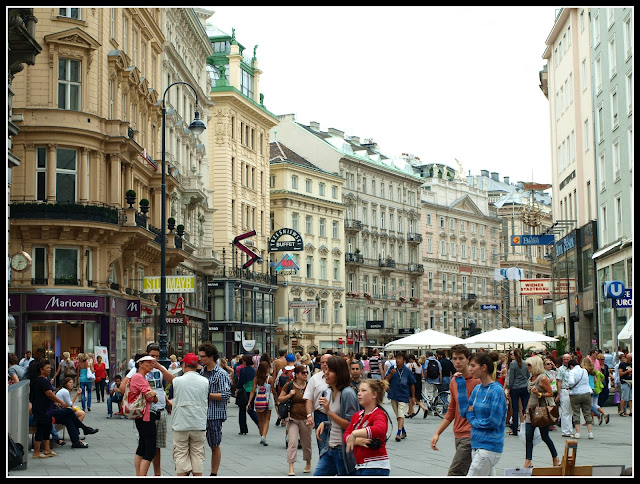 This is a common sight in this part of the world. In Austria coffee-and-cake is a serious business, almost an art-form in its own right. 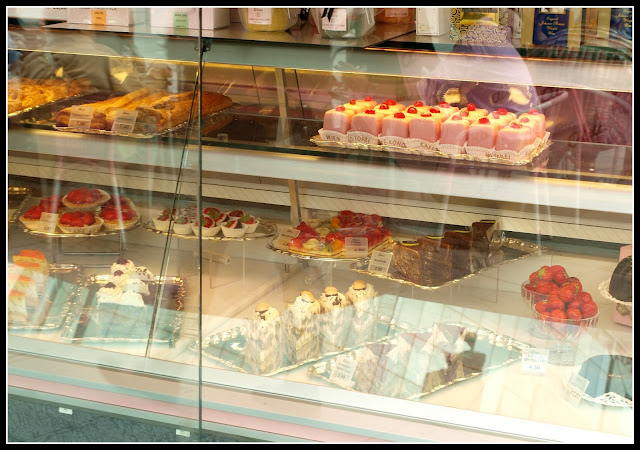 Here is another typically Viennese sight - the Fiaker, a 2-horse carriage that transports the tourist around the city in style and at a sedate pace. They are still surprisingly numerous. 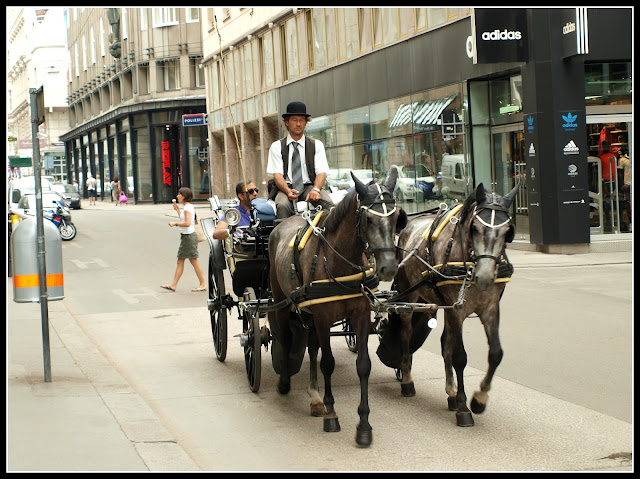 I can't remember which church this is - there are just so many impressive buildings like this to see! 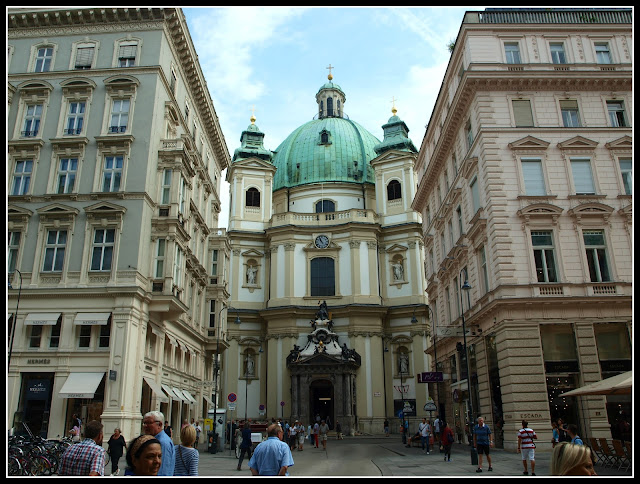 On the morning of Day 3 we visited the Spanish Riding School and saw the famous Lippizaner stallions at practice. The full performances are in the evenings (times when we prefer to be in a restaurant!). We are not "horsey" people, so this excursion was only mildly entertaining, and is not something we would want to repeat - but then everyone likes something different... Later that morning we made our way to the Naschmarkt, a place much more to our liking. It is a huge area devoted to permanent stalls selling food and drink. Most of the stalls sell ingredients, but there are also huge numbers of small restaurants selling prepared foods. I intend to write a full blogpost just about the Naschmarkt, so I won't say much about it here.

On the road opposite the market are lots of very ornately-decorated buildings, mostly in the Art Deco style: 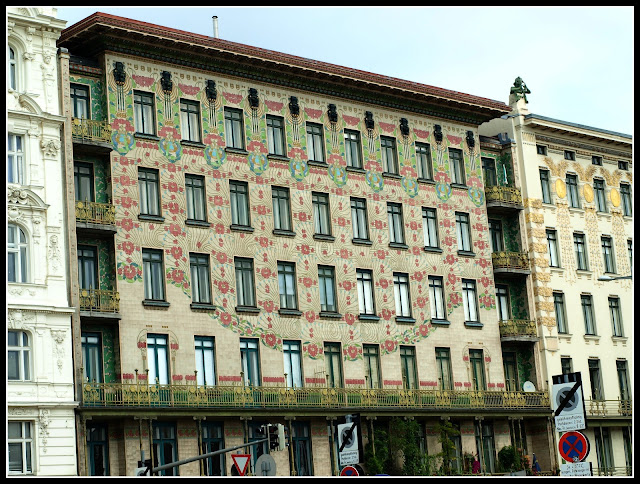 But this is where the real market begins... If you look carefully you can just see Jane's back as she dives enthusiastically into the "Markt Gebeit" (just by the bonnet of the white van). 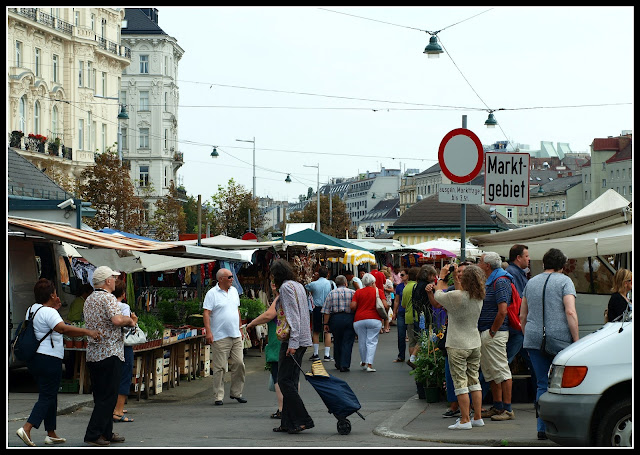 More on the market experience some other time, but for now, back to the city. Some of the civic art is very "contemporary", like this piece entitled "Explosion", which seemes to be made entirely of wire-wool scouring pads! 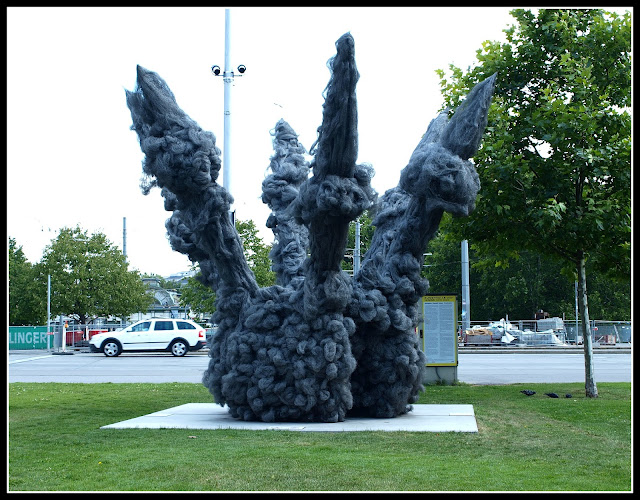 Day 4 of our trip took us out to the Vienna Woods area to the north-west of the city - surprisingly easily accessible by public transport). Getting off the U-Bahn (underground railway) at its terminus at Heiligenstadt you are immediately confronted with this - the Karl Marx Hof, a classic example of 20th Century social housing, still impressive today (and very neatly maintained I would add). 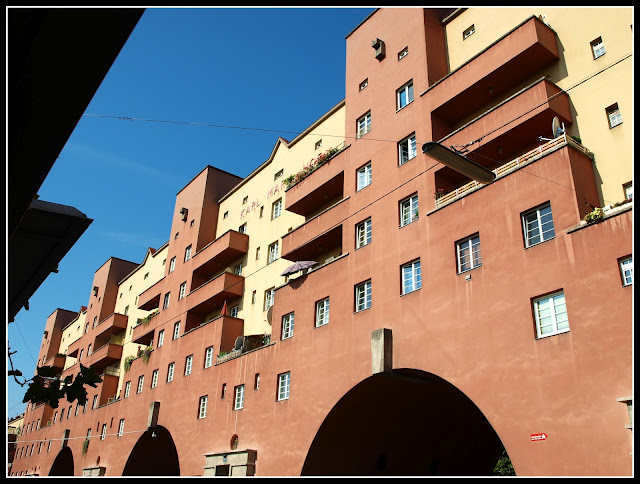 Taking the bus from Heiligenstadt, we made our way to the twin hills of Kahlenberg and Leopoldsberg, from which there are fabulous views over the city and its environs. Unfortunately it was a very hazy day, so photography was a challenge, but maybe this shot gives you an impression of what the views are like. This is the Alte Donau (the original Danube river) alongside the Neuer Donau, an artificially created parallel river which runs alongside the old river for about 21 miles, creating the narrow Donau Insel (Danube island) which is a very popular place for the city-dwellers to hang out on the "beach" at weekends. You can see in my photo one of the huge narrow barges that carry freight down this massive river. 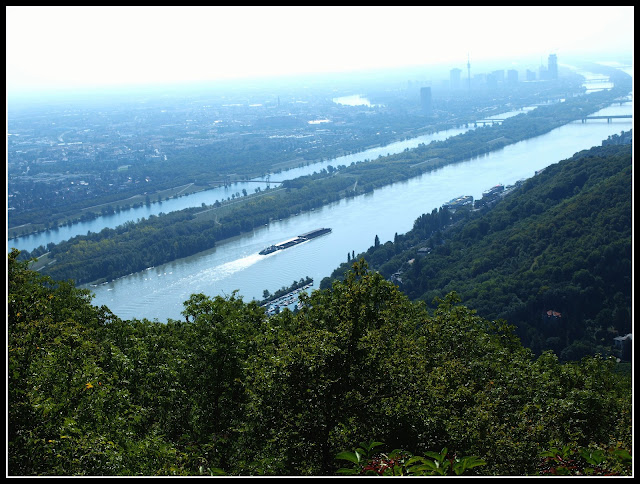 After admiring the views for a while we returned to the village of Grinzing, where the Vienna woods end and you re-enter civilisation. Grinzing is a village with loads of "Heurige". The Heuriger is a boozing establishment chiefly aimed at presenting the local wines to the city's population which makes its way out to this area in droves at the right time of year. This is a typical Heuriger: 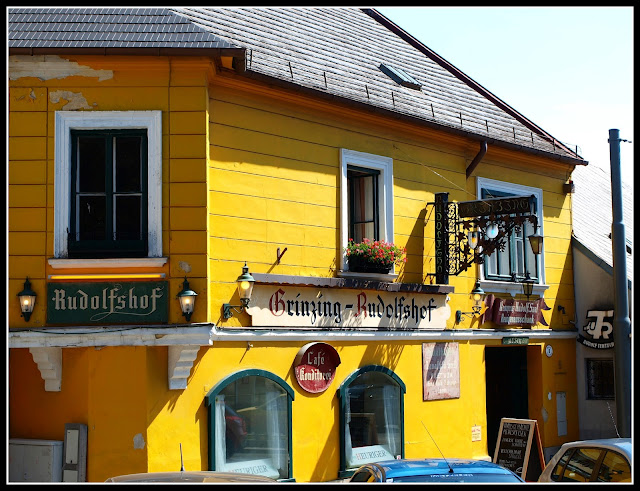 Obviously we visited at the wrong time of year to sample the local wines (harvest-time is Autumn, and last year's wines were long gone). but nevertheless we had a good hearty lunch and a couple of glasses of very presentable Gruner Veltliner before taking a tram back into town prior to heading off to the airport for our return flight to England.


This is where we had our lunch. 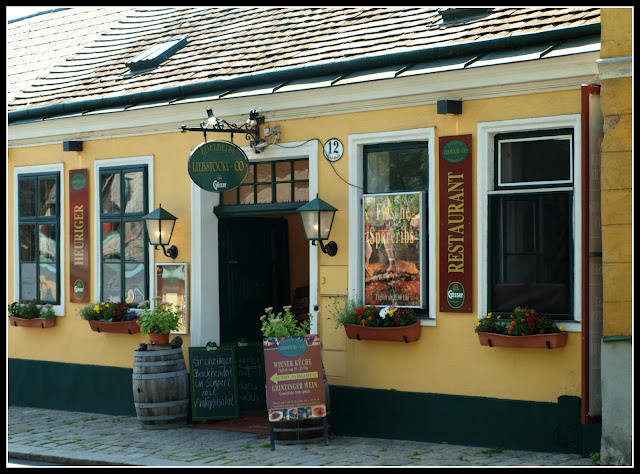 ﻿
I could show you hundreds more photos, but you have probably run out of patience by now, so suffice it to say that Vienna is a city well-worth visiting, whatever your interests. It's very much our sort of place, and I expect we will be back there again before very long.
Posted by Mark Willis at 17:30