Tall. That's what most of the plants in my garden are now. At this time of year most of them are at their pinnacle of growth. Not being a tall person myself, I often find this presents some problems! My Runner Beans, for instance, are growing on 8-foot canes. If we assume that about one foot of this is underground, it still means the canes are about 7 feet tall. The beans climb up to the top and then flop over. It's a good job too, because I'm sure that if they had 20-foot canes they would still keep on growing upwards!


This is my "picker's eye" view from ground level. Notice that the beans (which have already produced a massive crop this year) are now flowering again, so there will probably be more beans to come. In a good year I'll be picking Runner Beans from July to October. 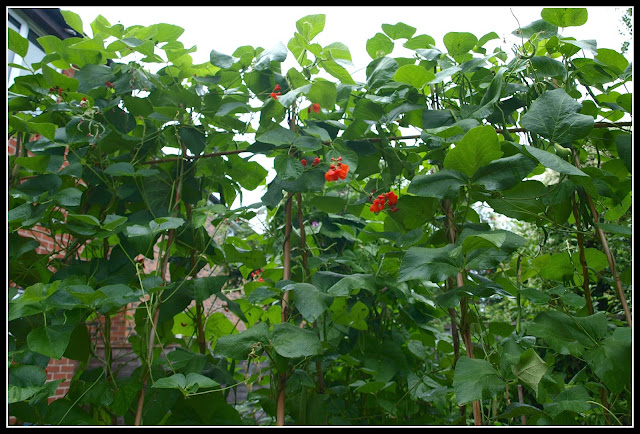 Looking further afield, you can see in my next photo how big the Asparagus fern has grown. (Centre, right). 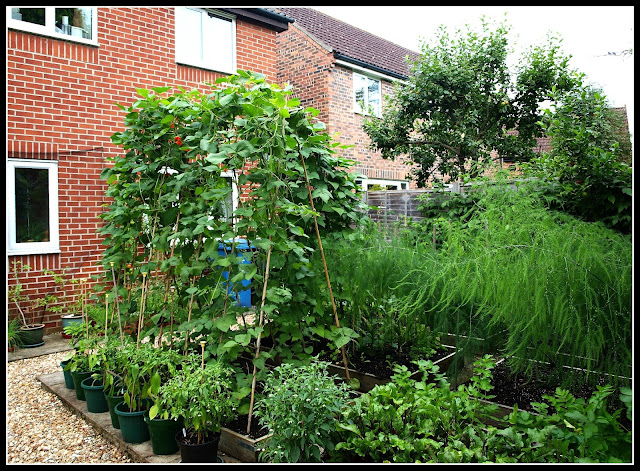 Here's a better view of the Asparagus. The ferns are so tall that I have supported them with a ring of wire held up by my trusty Build-a-Ball kit. The brick is also there in the (vain) hope of keeping things upright. Since I'm pursuing the "Tall" theme, notice too the neeted Brussels Sprouts at the right of this picture. 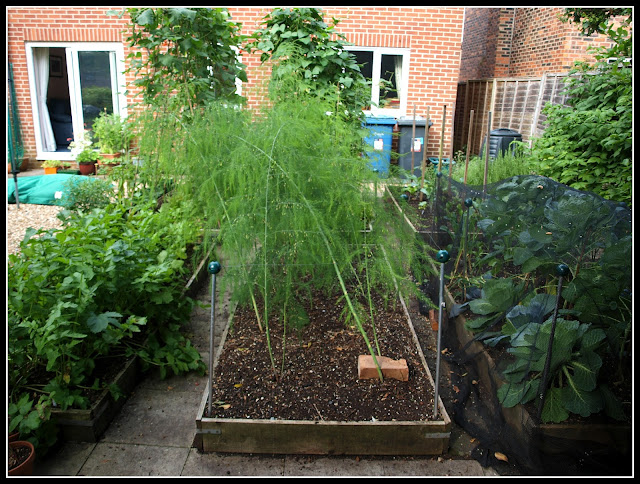 Over by the fence, the "Autumn Bliss" raspberries are taller than the 6-foot wooden panels now. The first berries are just forming, so hopefully there will be a good crop. Raspberries enjoy cool, moist conditions, so this year has presumably been very much to their liking! 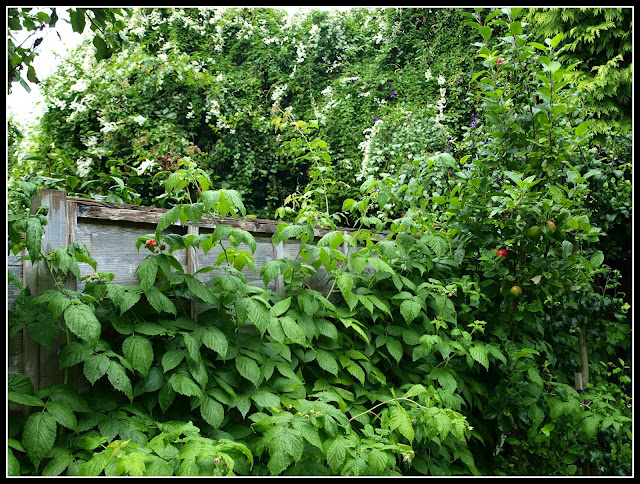 Down by the back fence my Bronze Fennel has reached about 6 feet tall too. Of course you have to remember that it is growing next-door to the Rhubarb that produced a flower-stalk which reached a height of 1.92 metres... 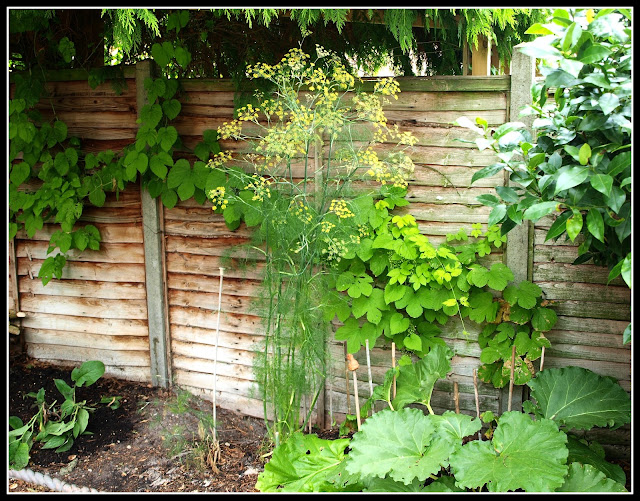 Notice how the Golden Hop in the background adapts to the light conditions. The bit in full sunshine has yellow (golden?) leaves, whereas the part which is totally shaded by my neighbour's conifer tree has very green leaves.

On the patio stands the big tub with the two cucumber plants in it. These are the ones on whose seed-packet it says "will do equally well in a 9" pot on a windowsill". That's another 6-foot bamboo cane supporting them. The tripod of 3-foot canes I gave them turned out to be totally inadequate.(It's still in there somewhere). 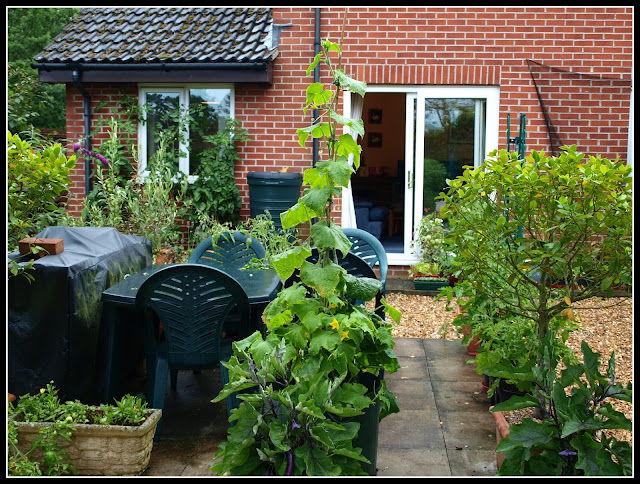 On the road side of the garden, the climbing French Beans take a sneaky peek over the brick wall... Maybe they give passers-by a tiny clue about what lies on the other side? My back garden is delightfully secluded and you can't see any of it from the road (except the tops of the trees, that is). 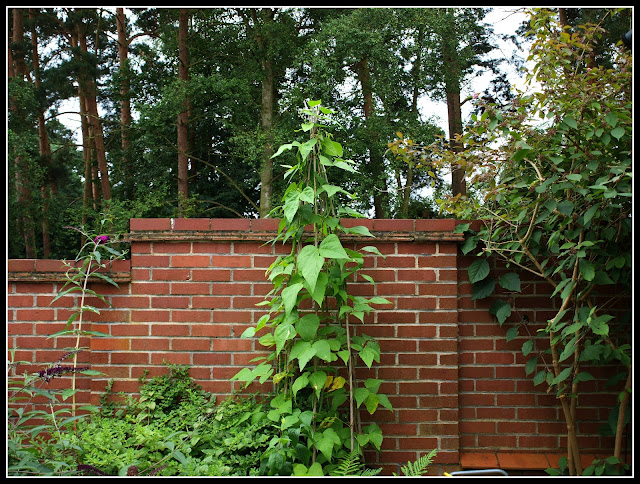 Up close to the house are some of the big tomatoes: "Orkado" at left, "Sungold" in the centre, and "Ferline" at the right. 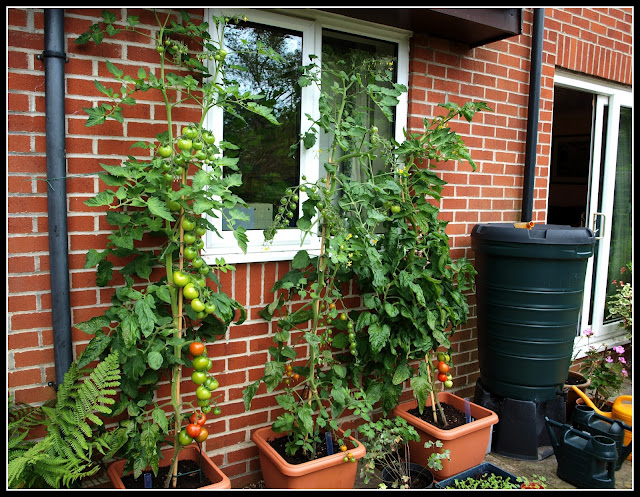 The "Orkado" plant here has become so laden with fruit that it is top-heavy. I have therefore tied its supporting cane to the black drainpipe you see at the left of this photo.
Posted by Mark Willis at 17:30